The Choir of the Church 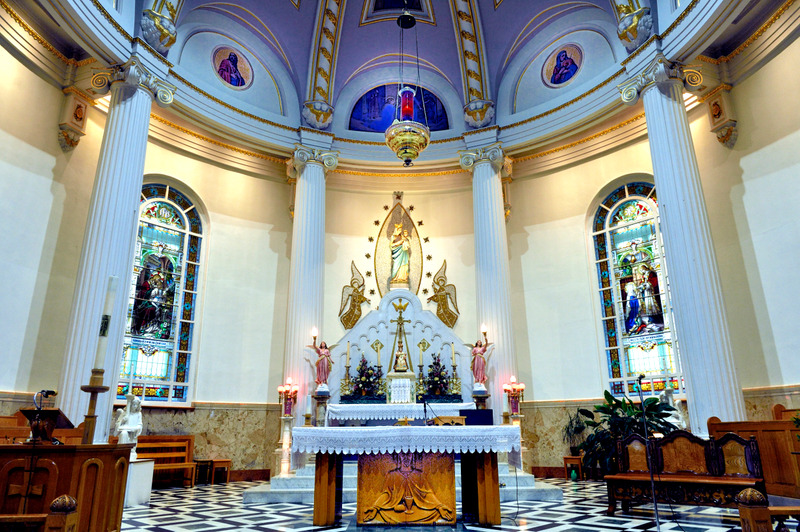 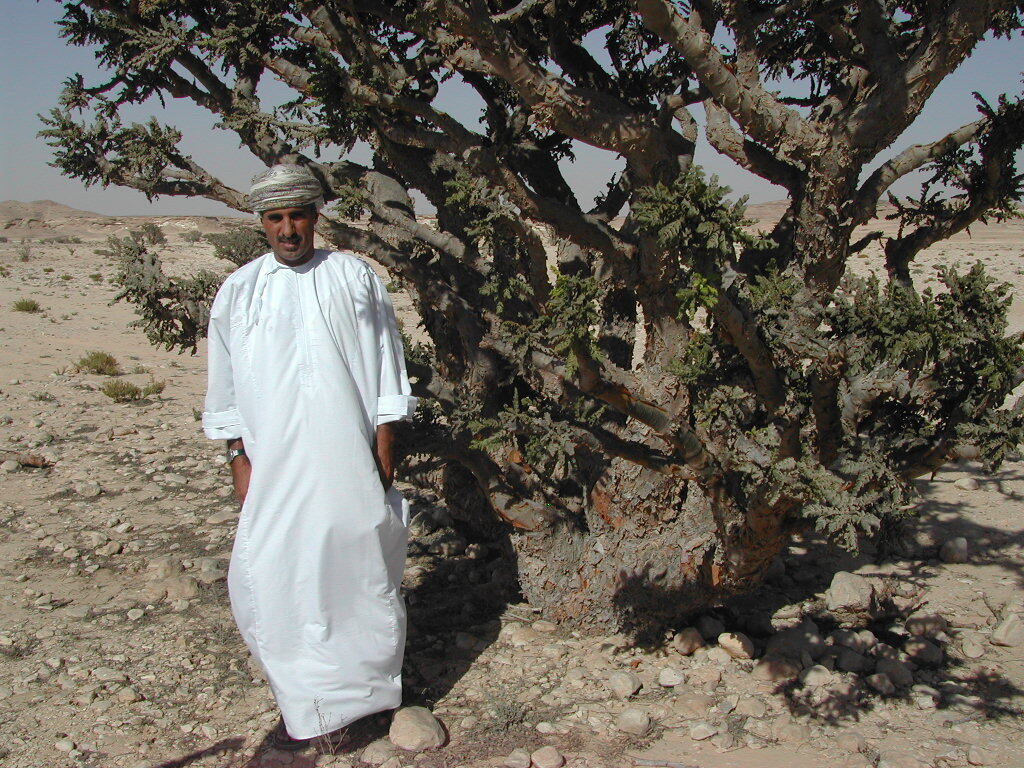 A small deciduous tree 2-8 m high, which has one or more trunks. It grows in the dry regions of northeastern Africa and the southern Arabian Peninsula. The resin is harvested by making a shallow incision in the trunk or branches of the tree and removing a narrow strip of bark. A milky sap flows from it, which coagulates on contact with the air and which is then picked up by hand. 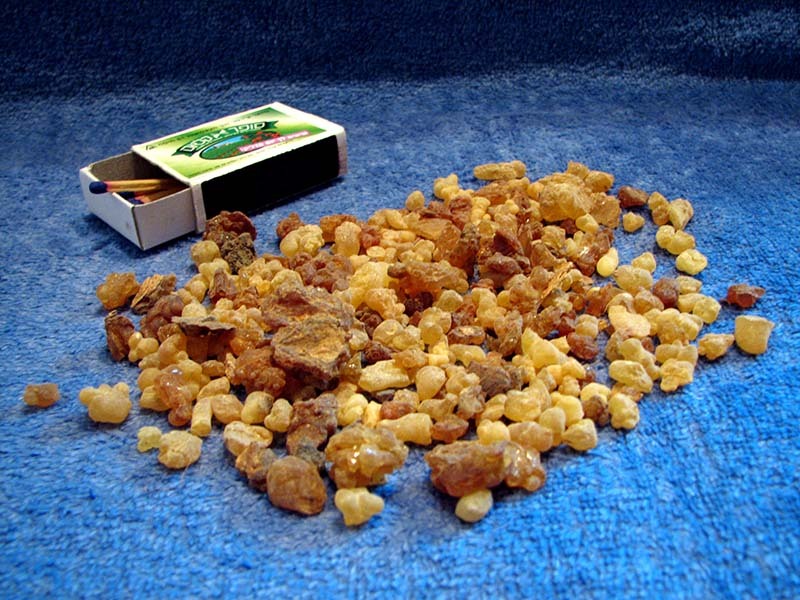 Also known as frankincense, frankincense is an aromatic oleo-gum-resin which when burnt gives off a distinctive and pleasant woody scent. 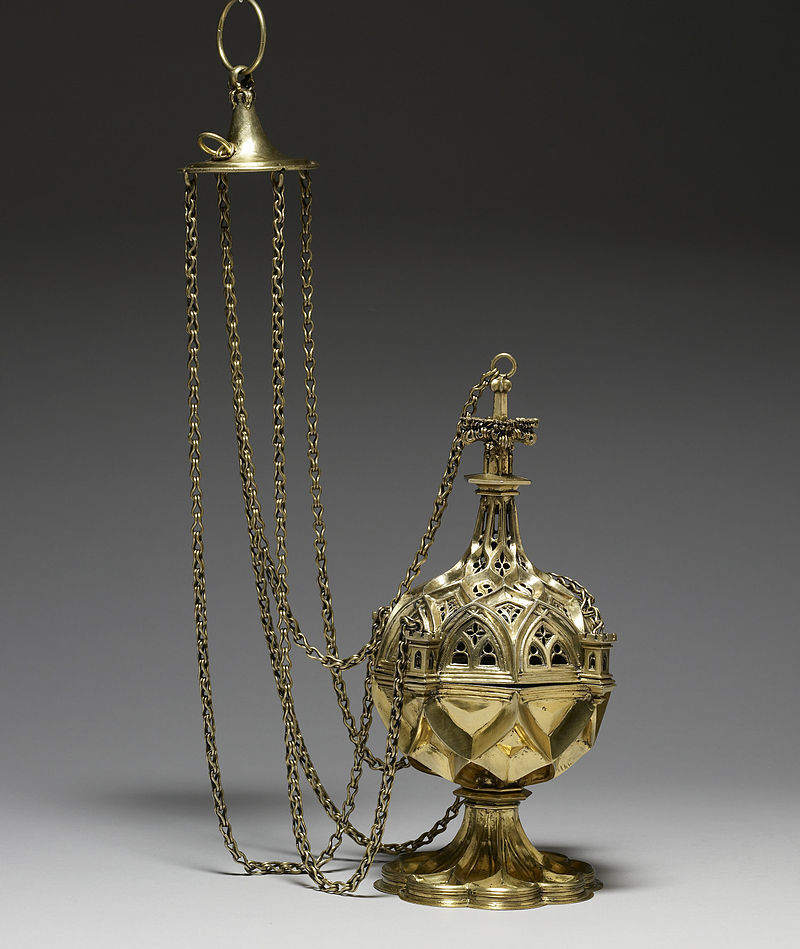 A thurible is an incense burner generally made of metal or porcelain. In the Latin and Eastern Catholic liturgy as well as in the Orthodox liturgy, it is intended for mobile use and is generally suspended from three chains which allows it to be balanced.

Credit: Wikipedia under the heading "Encensoir". 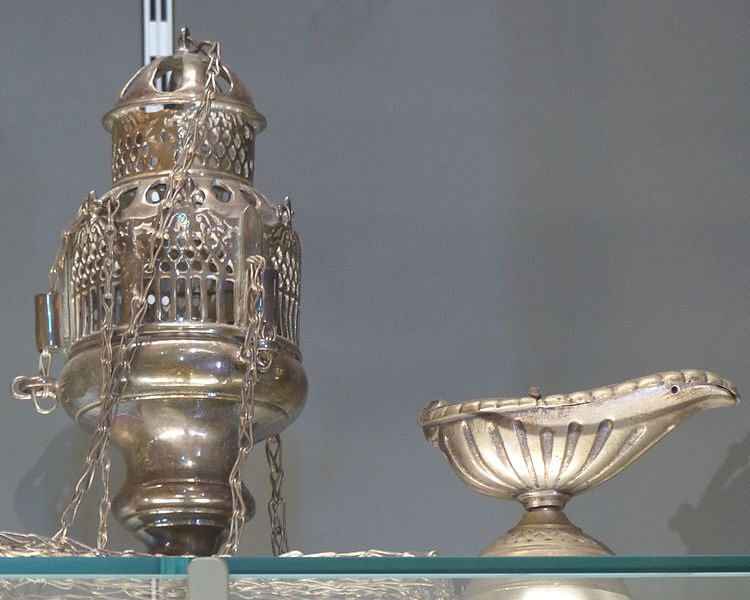 Another example of a thurible, this time accompanied by an incense boat. An incense boat is a container usually made of metal, containing grains of incense. The incense boat is shaped like a small nave, often on a small foot, with a hinged lid that opens onto all or part of the boat. It can include a chain to which is attached an incense spoon. 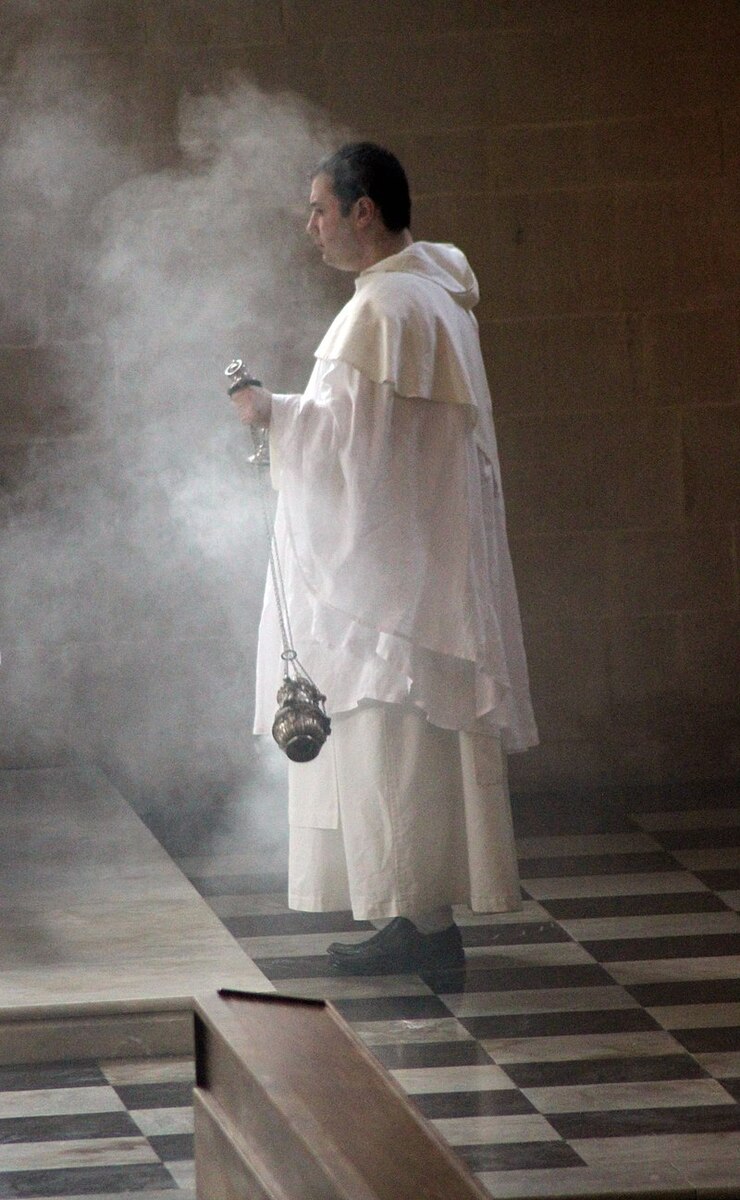 Another example of a thurible also calles censer. The person called to use the thurible is called the thurifer.

Text: Wikipedia under the heading "Thurible". 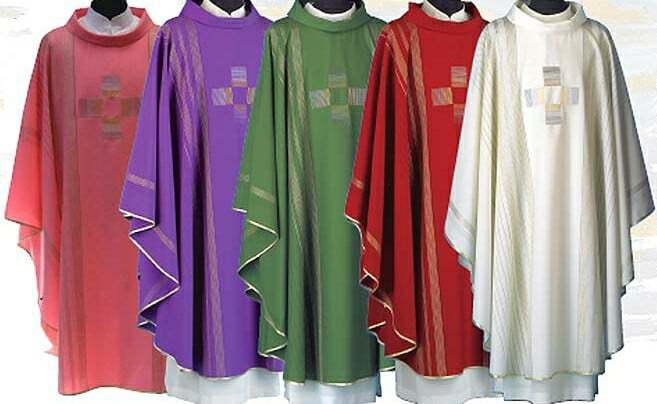 The chasuble is a two-paneled, sleeveless priestly garment with an opening for the head, which the priest dons over the alb and the stole to celebrate Mass, or other liturgical actions immediately preceding or following Mass.The chasuble symbolizes charity, the love of the Lord, which must envelop the priest and the yoke of the Lord.

Definition, Wikipedia under the heading "Chasuble". 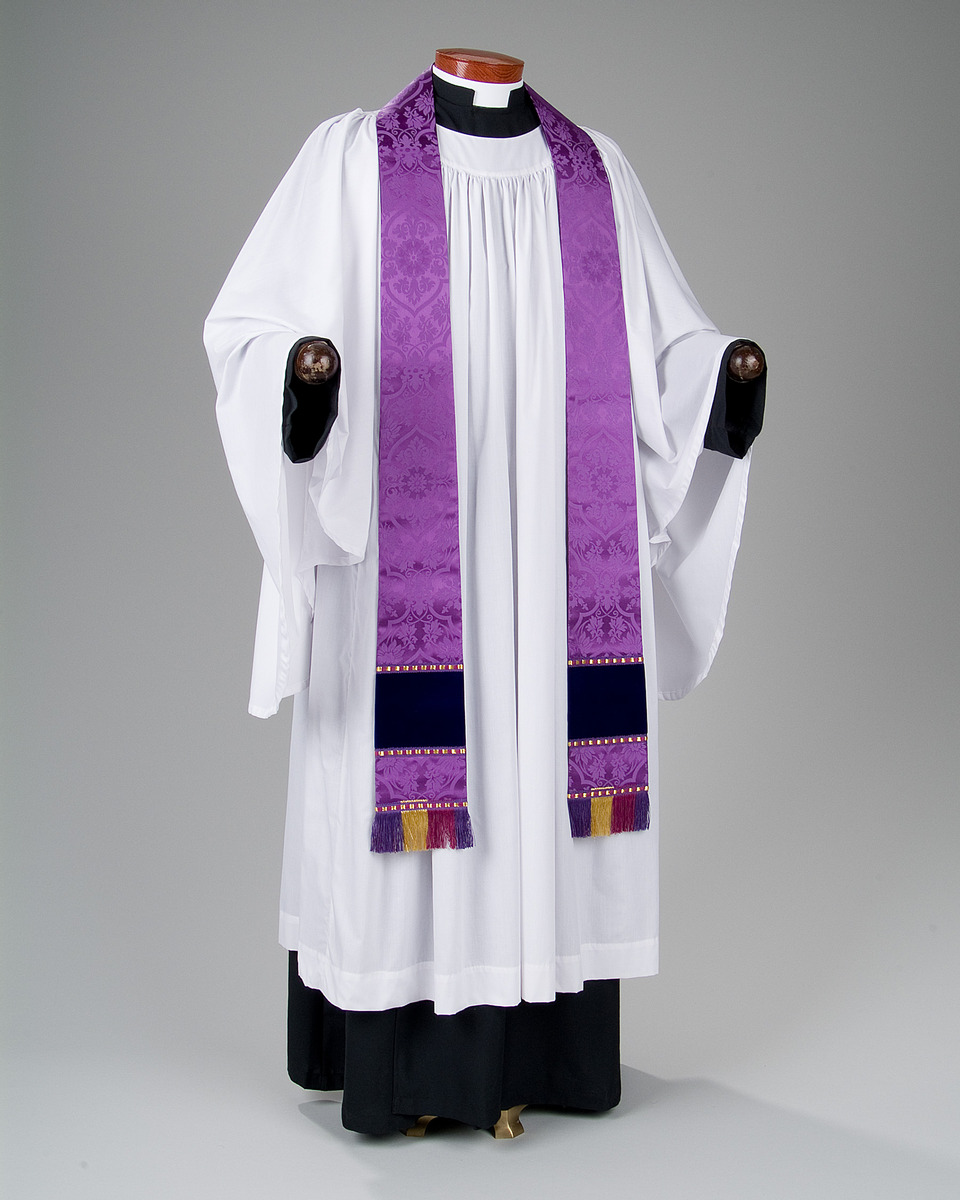 The stole, derived from the Latin stola which means long dress. The stole is a piece of cloth worn over the shoulders, in its secular use, and a liturgical ornament of the bishop, priest and deacon. It is the preeminent badge of the priesthood.

Definition, Wikipedia under the heading " Stole". 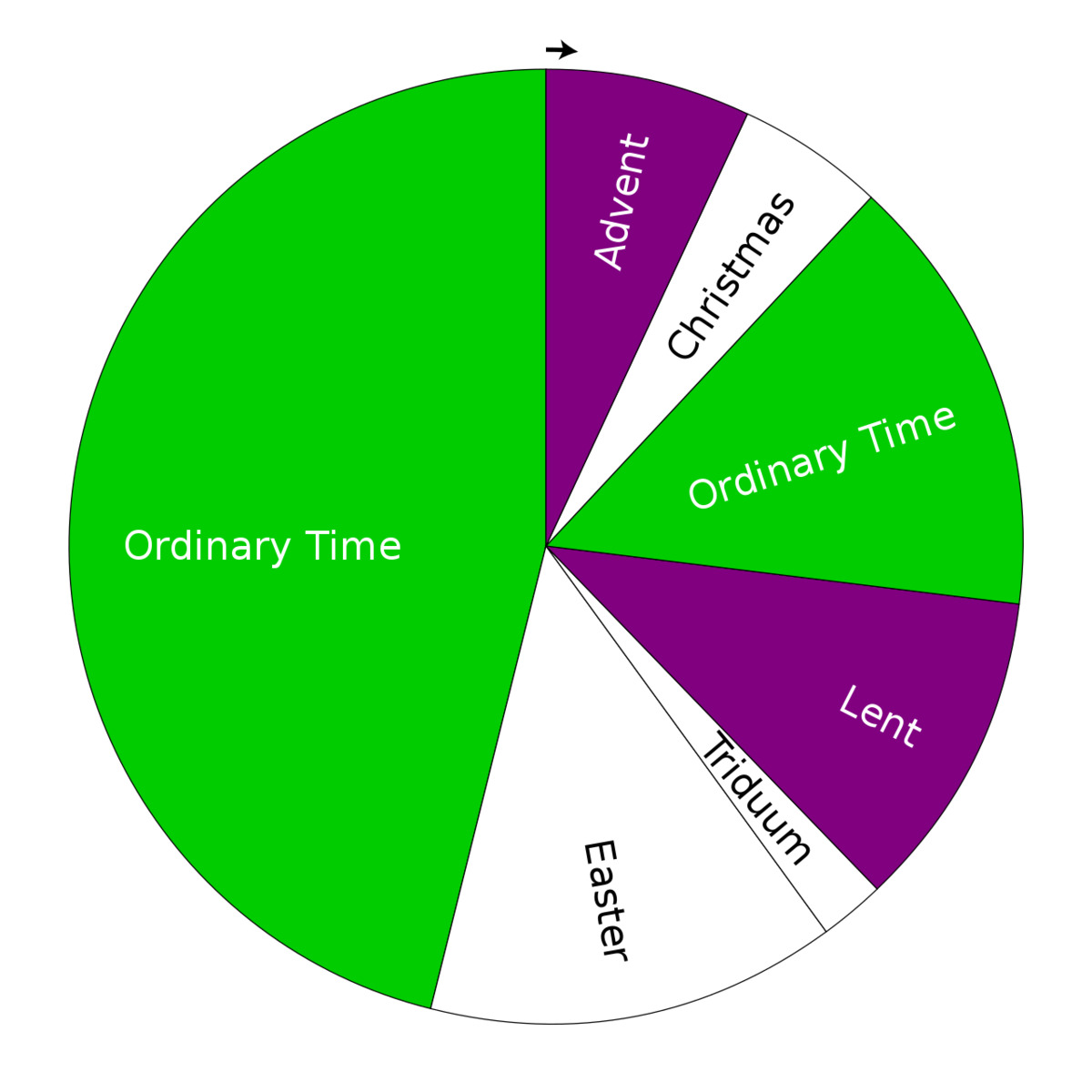 The calendar of the liturgical year indicates when to wear liturgical vestments of a given color. The last revision of this color code dates from 1969 under Pope Paul VI. Since then, four main colors have been used: white, green, red and purple. On special occasions, pink, light blue gold and black can also be worn.

PART 3 - THE CHOIR OF THE CHURCH

Grandpa: Tell me kids, do you see this candle lit inside a red globe very high above the choir?

Grandpa: And what does this candle represent?

Grandpa: You're right Delphine, but this lamp also tells us something else. This lamp burns at all time this is why it is called the sanctuary lamp or eternal lamp, and when it is lit it indicates the presence of Jesus Christ in the consecrated hosts contained in the tabernacle. The use of an eternal lamp is a borrowing from Judaism. This Christian tradition of placing such a lamp in a church began in the sixth century.

Guillaume: So this lamp is really always lit?

Grandpa: Guillaume, you are sneaky. It is true that during Holy Week and more precisely from Good Friday, the day of the crucifixion of Christ to Easter Sunday, the day of his resurrection, the lamp is extinguished, indicating that there are no consecrated hosts in the tabernacle.

Grandpa: Earlier I told you that during the funeral, the coffin was incensed. I’d like to talk to you about this incense product and how the church uses it. For starters, have you ever noticed that generally it smells good when you enter a church?

Grandpa: Well let's talk about incense. Frankincense is a resin, an aromatic gum from trees found in the Middle East. The trunks of those trees are notched in order to let escape the resin, which will harden on contact with air. Frankincense has always had an importance in religions. The Egyptians made great use of incense to perfume. The ancient Greeks and Romans also used incense in their religious cults. For Judaism incense is sacred and is reserved for the Lord, therefore for God. To read about it one would think that the Gods very much loved and still love the smell of incense. It is not surprising to discover that the use of incense was associated, from the very beginning, with different rites of the Catholic Church. So what does incense represent? Well when you burn incense, it gives off smoke. This smoke represents prayer, purification and the ascent to heaven. This is why the incense is used during the mass to purify various elements used but also during funeral ceremonies to incense the coffin or the urn containing the ashes in order to represent by this odorous and pleasant smoke the prayer, but also the rise of the soul of the deceased to heaven, to a better world. I brought some pictures of a thurible used to incense and of an incense boat, which is a small urn in which incense is kept.

Grandpa: Kids, you have certainly seen priests dressed in their vestments to celebrate Mass, have you not?

Delphine: Yes grandpa and I noticed that the jacket they wear is not always the same color.

Grandpa: This is exactly where I wanted to go. Well, a priest to prepare to celebrate Mass wears what is called vestments. He usually wears an alb, which is a long white tunic with sleeves. During the celebration of Mass, he also wears a chasuble, which is a two-sided garment that can be put on by passing the head through a slit in the center of the garment. The priest then lets it hang in front and behind. The priest then puts on a stole which is a wide band of material worn around the neck and hanging in front of the body. I brought some pictures so you can see them all.

Grandpa: So much for clothes worn during mass. But what of the colours?

Guillaume: I have already seen priests dressed in purple.

Grandpa: It's true Guillaume, you're right. There have been over time several vestment colors including green, white, red, black, gold, blue, gray, purple, brown, pink, yellow and purple and each of these colors has inherited a specific meaning and a specific time for wearing a chasuble of these colors. Over time many colors have fallen into oblivion. This is the case of black which was worn for funeral offices and for Good Friday. In past time, yellow could replace all colors except black. Blue was worn in Spain and Latin America for the feast of the Immaculate Conception. Finally, gray was worn in France on Ash Wednesday, the day after Mardi Gras, which marks the start of Lent. Today, the Catholic Church has adopted the following colors: green, white, red, pink and purple. Throughout the year, the color of the vestment worn by the priest changes according to a precise liturgical calendar called the liturgical year. As an example, green is worn most of the year, you could say in ordinary time. White is worn during special celebrations such as Christmas or Easter. Red is worn during Palm Sunday and Pentecost, pink is worn on the 3rd Sunday of Advent and the 4th Sunday of Lent and finally, purple is worn during moments of penance that is to say during preparations in anticipation of the Christmas feast called Advent time. Purple is also worn during the moment of penance before Easter, that is to say the time of Lent. Look at the image I have on my phone, you will be able to see precisely what color the priest would be wearing.

Extract of
The Church of Château-Richer - Between Heaven and Earth