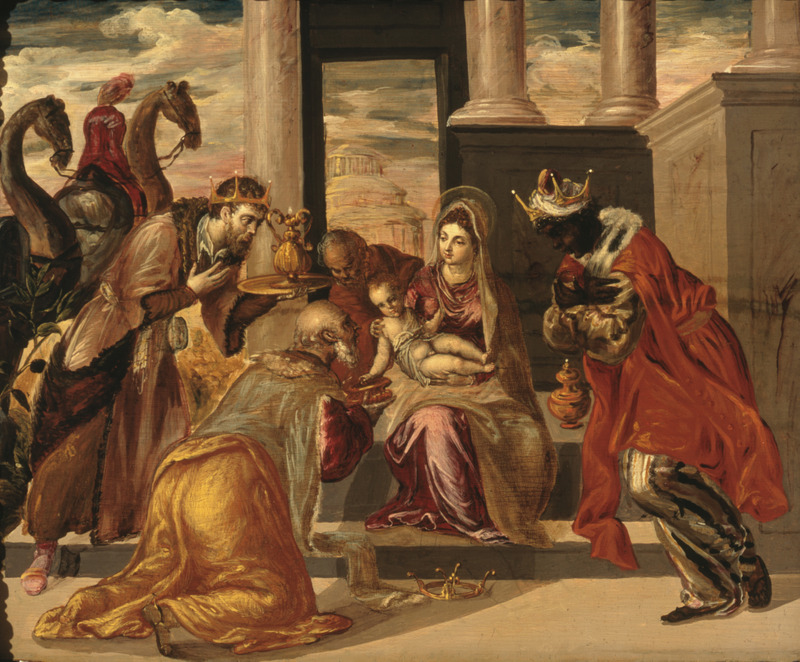 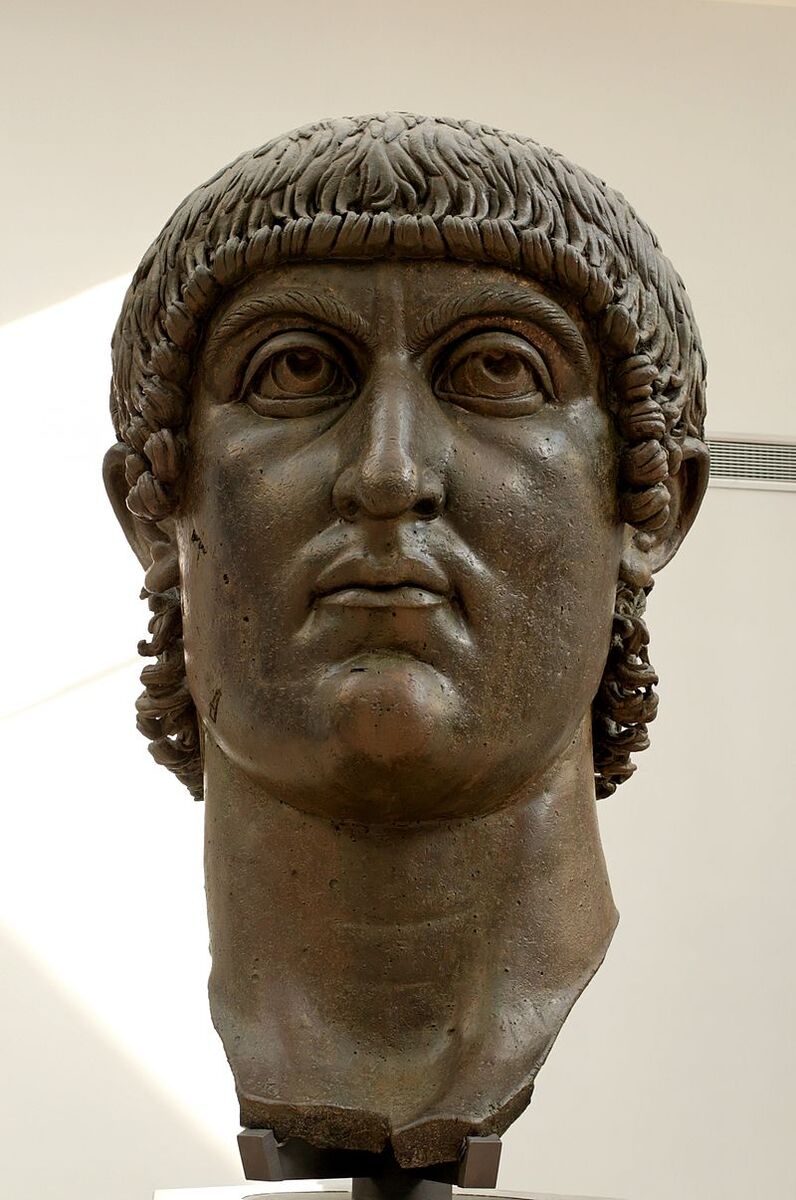 His reign saw the establishment of individual freedom of worship, which ended the persecution of Christians. His reforms largely promoted the development of Christianity to which he is gradually turning. 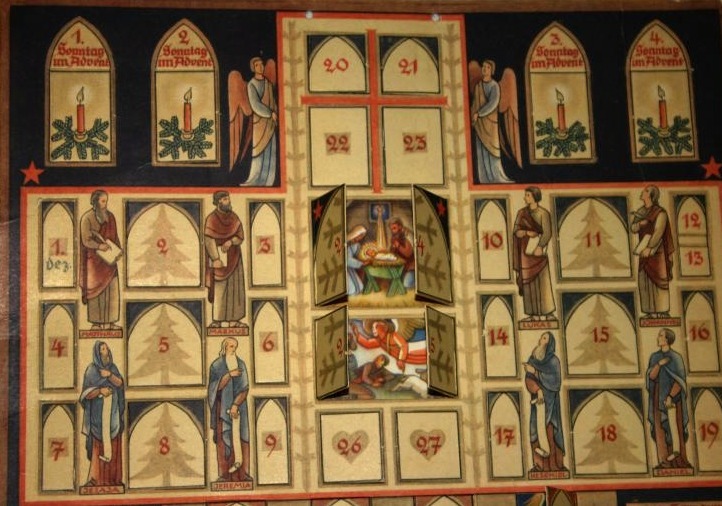 The Advent calendar is a tradition of Germanic origin intended to make children wait until Christmas. It was a tradition in this country to give devout pictures to children every morning during the 24 or 25 days leading up to Christmas. The modern calendar often takes the form of a cardboard board in which are pre-cut 24 (or more rarely 25) windows that are opened gradually, one per day. We can then read a sentence from the Gospel or take what it contains (often a chocolate). 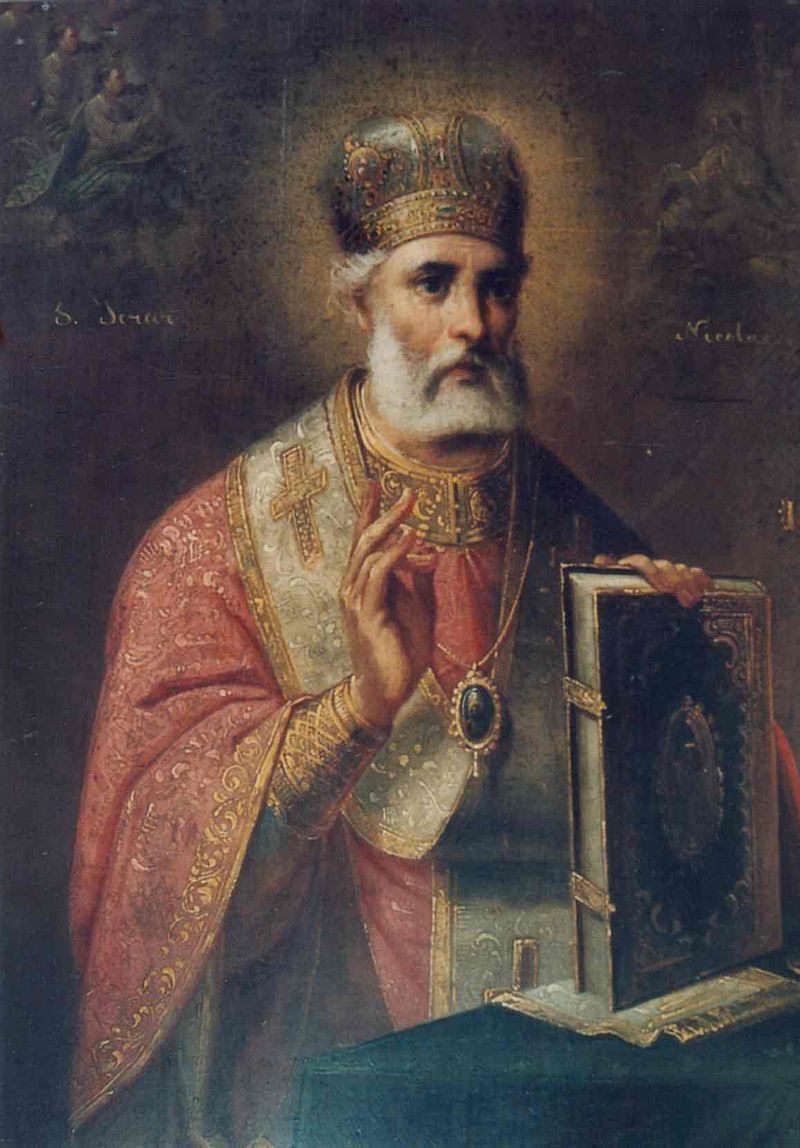 Nicolas de Myre or Nicolas de Bari, commonly known under the name of "Saint Nicolas", was born in Patare, in Lycia (now Turkey), around 270 and died in Myre in 345. December 6, Saint-Nicolas day , is traditionally celebrated in several European countries in Northern and Eastern Europe. This is when gifts are distributed to all good children. 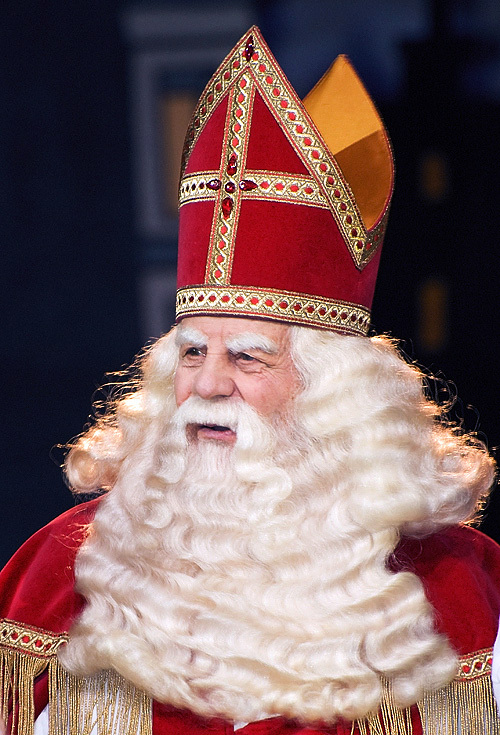 A modern representation of the costume of Saint Nicholas. 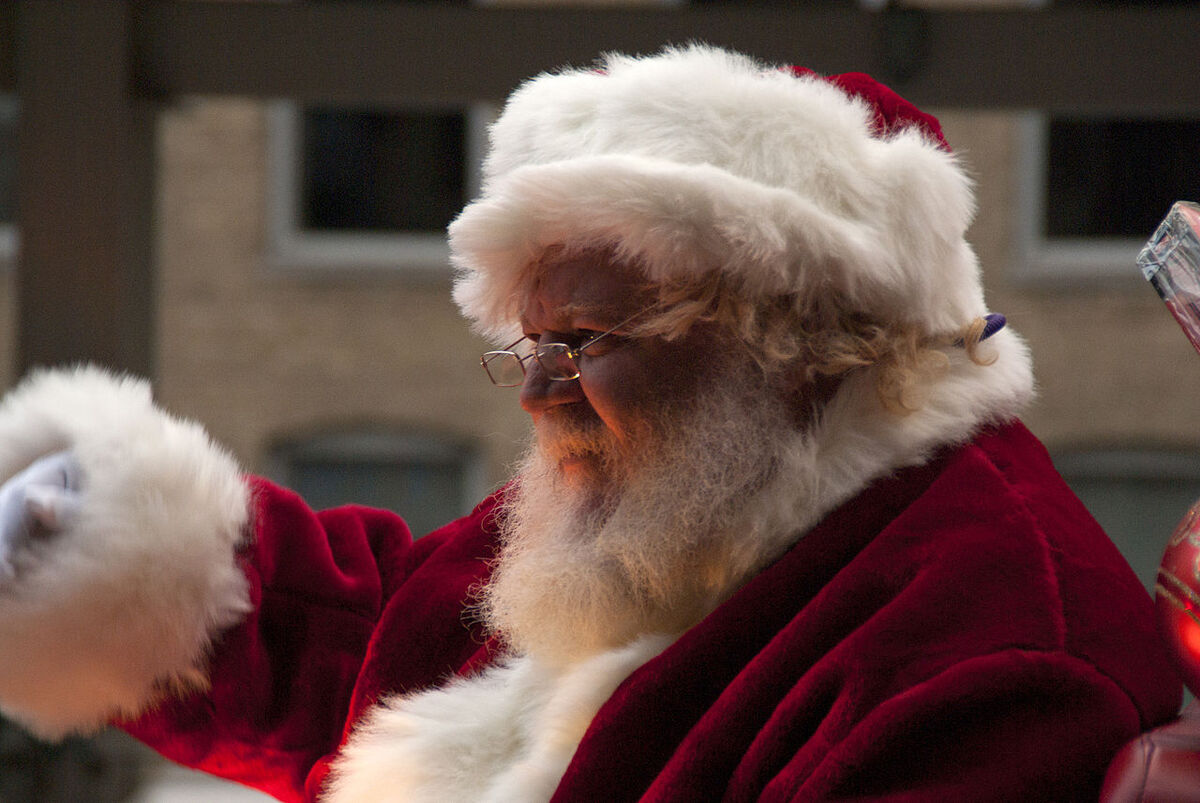 Santa Claus can be seen as a relatively modern syncretistic construction but with distant origins: if Nicolas de Myre is traditionally considered as the saint at the origin of Santa Claus, this cosmopolitan character is the result of a mixture of several traditions, tales, legends and folklore.

The English name of Santa Claus is a deformation of the name Sinterklaas (Saint Nicholas) in Dutch. The link between Saint Nicolas and Father Christmas is thus made. 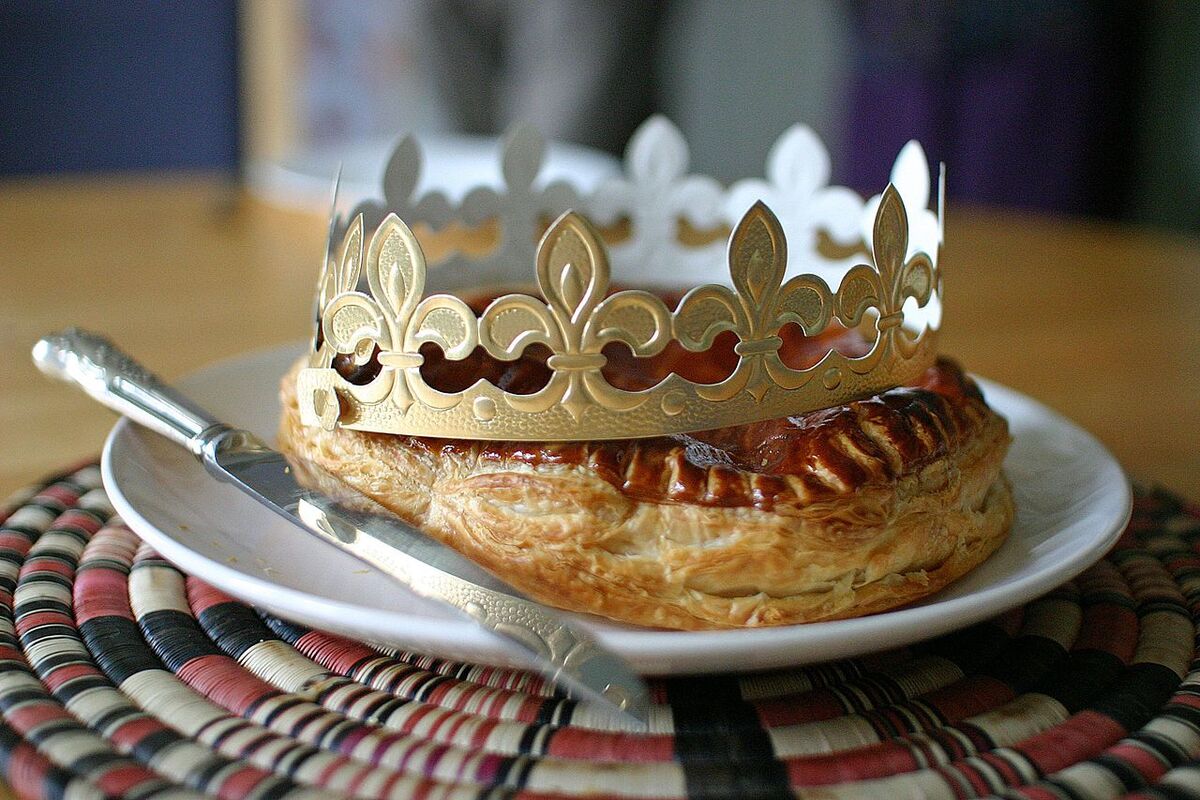 The galette des rois or King cake is a traditional pastry prepared and consumed to celebrate the visit of the three wise men to the baby Jesus. This celebration takes place, depending on the country on January 6 or the first Sunday after January 1. 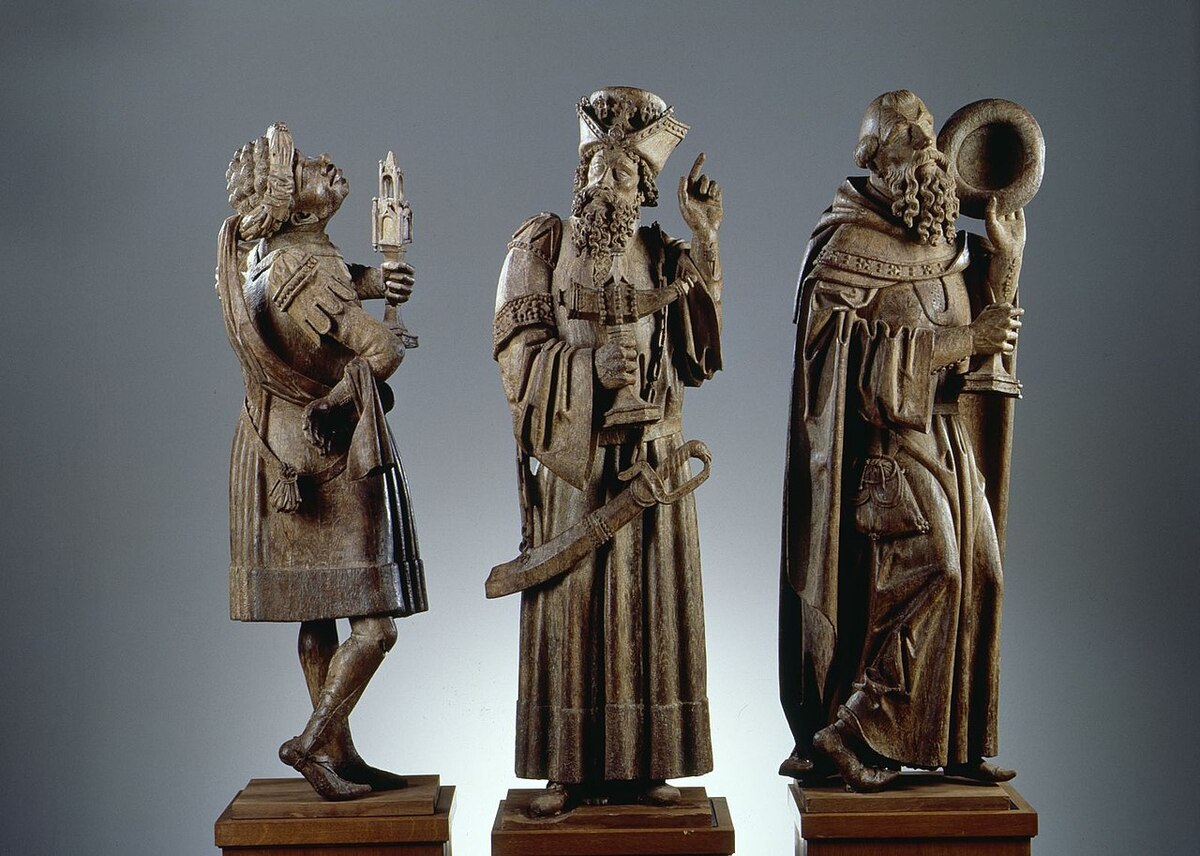 Visitors who appear in an episode of the Gospel according to Matthew are traditionally called Magi, who, having learned of the birth of Jesus, come "from the East" guided by a star to pay homage to "the King of the Jews" and bring him gifts of great symbolic wealth: gold, myrrh and frankincense. In the Christian tradition, the visit of the Magi is celebrated on the day of Epiphany. The names of Melchior, Gaspard and Balthazar are popularized in the 8th century. 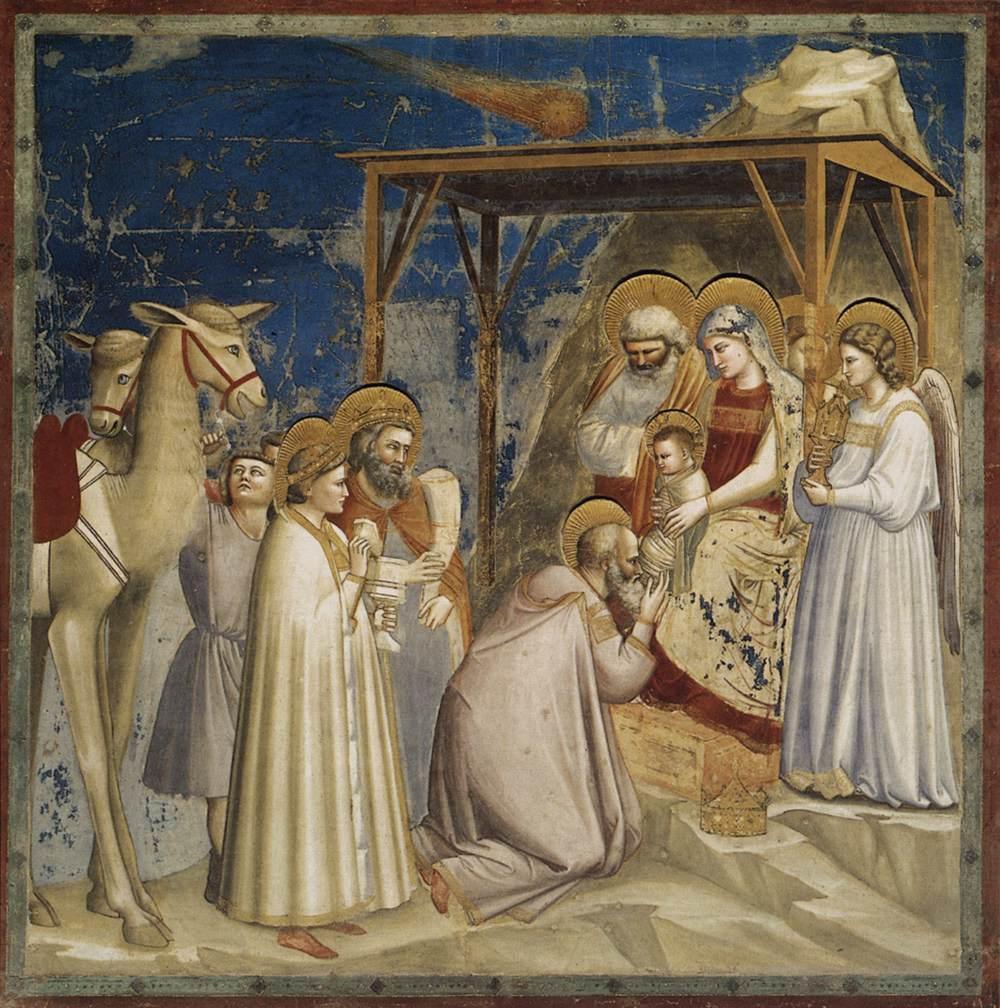 Fresco in the church of the Arena in Padua (Italy). The fresco is by Giotto di Bondone and represents the adoration of the Magi. It was painted between 1304 and 1306.

Grandpa: How about we talk about some Catholic Holidays… In order of importance, the Catholic Holydays are Easter, Christmas, Pentecost, the Epiphany and the Ascension. I would like to start by talking about the birth of Jesus on December 25. What do you think this Holiday is called?

Guillaume and Delphine: I know, it's Christmas.

Grandpa: That's it! But in truth we have no idea when Jesus was born. This holiday did not exist at the beginning of Christianity. Around the third century AD, attempts were made to determine the date of Jesus' birth. Several options were proposed and in the year 354, Emperor Constantine set the date of Christmas, the date of Jesus' birth, to December 25. Christmas is still to this day celebrated on that date.
That said, the period before Christmas is called Advent. This period lasts between 22 and 28 days. At the time of the establishment of this period of fast in France, the local Church wanted to prepare for this birth by fasting three days a week as well as by abstinence. Some saw Advent as a time of expectation and hope for the coming of Jesus. Over time this practice has exceeded the limits of France and has become widespread. Here at the Château-Richer Church Advent is still practiced every year.

Grandpa: But here is a question for you. Do you also practice Advent?

Delphine: Indirectly grandpa. We receive grandmother's Advent calendars each year and in these calendars we find between 22 and 28 small windows that can be opened, one per day behind which we find a chocolate.

Grandpa: Well, this idea of ​​giving children an Advent calendar to keep them waiting until Christmas is a tradition of Germanic origin that dates back to the 19th century only. At first pious images were offered to children. Around 1920 a calendar with small doors or windows to open was born. But chocolates arrived very recently indeed ... in 1958.

Guillaume: Grandpa, speaking of Christmas, it reminds me of St-Nicolas. Can you tell me who he was and if he's Santa Claus?

Grandpa: Well Guillaume, Santa Claus is a creation associated with the Christmas Holiday but it is inspired by the story of St-Nicolas. This Saint-Nicolas was bishop of the city of Myre in present-day Turkey in the 3rd century. Rich by inheritance from his parents, he distributed his wealth as gifts to children. For centuries, the Holiday of St. Nicholas was celebrated on December 6 of each year. He is also the holy protector of toddlers. That is why, it is customary for a character dressed as we imagined Saint Nicholas, to go from house to house to offer gifts to wise children. Can you start to see a resemblance Guillaume?

Guillaume: Yes grandpa, it looks like we're talking about the same person.

Grandpa: There, and even the English term for Santa Claus is a distortion from the Dutch "Sinterklaas" which means Saint Nicholas.

Grandpa: Now another important celebration of the liturgical calendar is Epiphany. Do you know this Holiday, children?

Delphine: Yes, it's the feast day of the Three Kings. I like this feast because Granny makes us a “three King cake” with the bean and whoever finds the bean is entitled to a gift.

Grandpa: Just so that you know, this tradition of serving a cake on that feast day dates back about 300 years ago and originated in France. But lets talk about the early origin of this Holiday. Even before the birth of Jesus we find pagan celebrations of light, because the word epiphany is taken from Latin and means to shine. This feast of the sun, of light is therefore celebrated centuries before the coming of Jesus. Subsequently, in Greece it was decided to celebrate this feast day 12 days after the birth of Christ. The notion of the visiting Magi found in the Bible was added to this celebration. Do you know the name of the three Magi, the Three Kings?

Delphine: Yes grandpa. Their names are Melchior, Caspar and Balthazar.

Grandpa: Well done, but in truth the Bible does not name the magi. These names only appeared in the ninth century. I brought illustrations of these three Magi.

Extract of
The Church of Château-Richer - Between Heaven and Earth