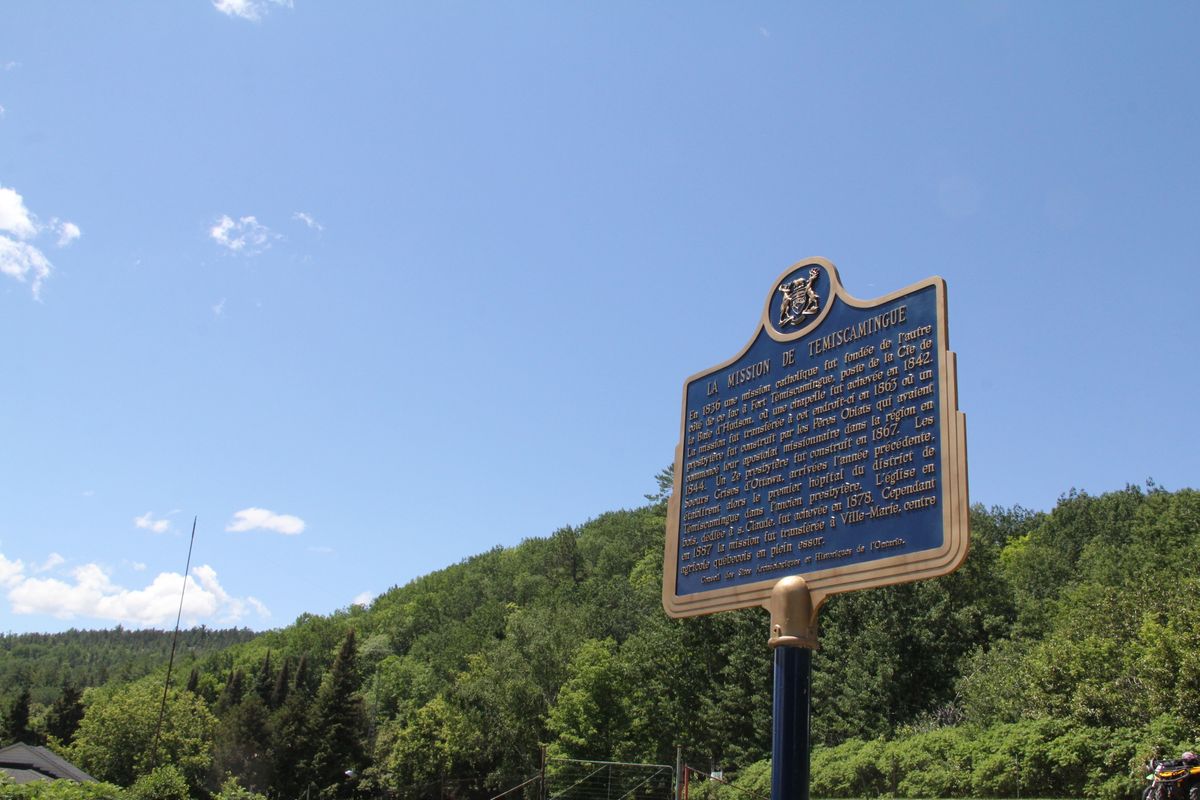 Erected in 1965, this is the first bilingual marker installed by the Ontario Government. 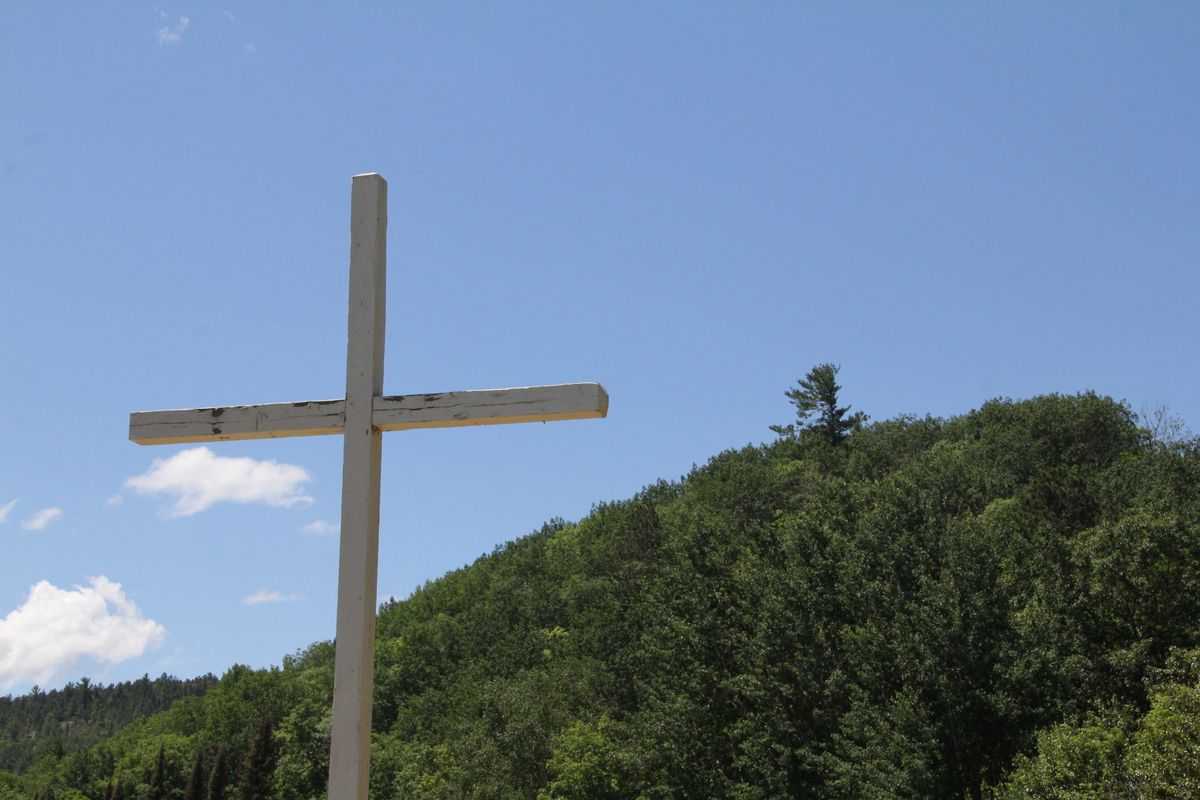 Site of the Saint-Claude Mission which was founded in 1863 by the Oblate Fathers of Mary Immaculate and the Sisters of Charity of Ottawa called the Grey Nuns of the Cross.

The cross that we find there today was installed in 1991 by the Heritage Society and Sainte-Marie Catholic High School. 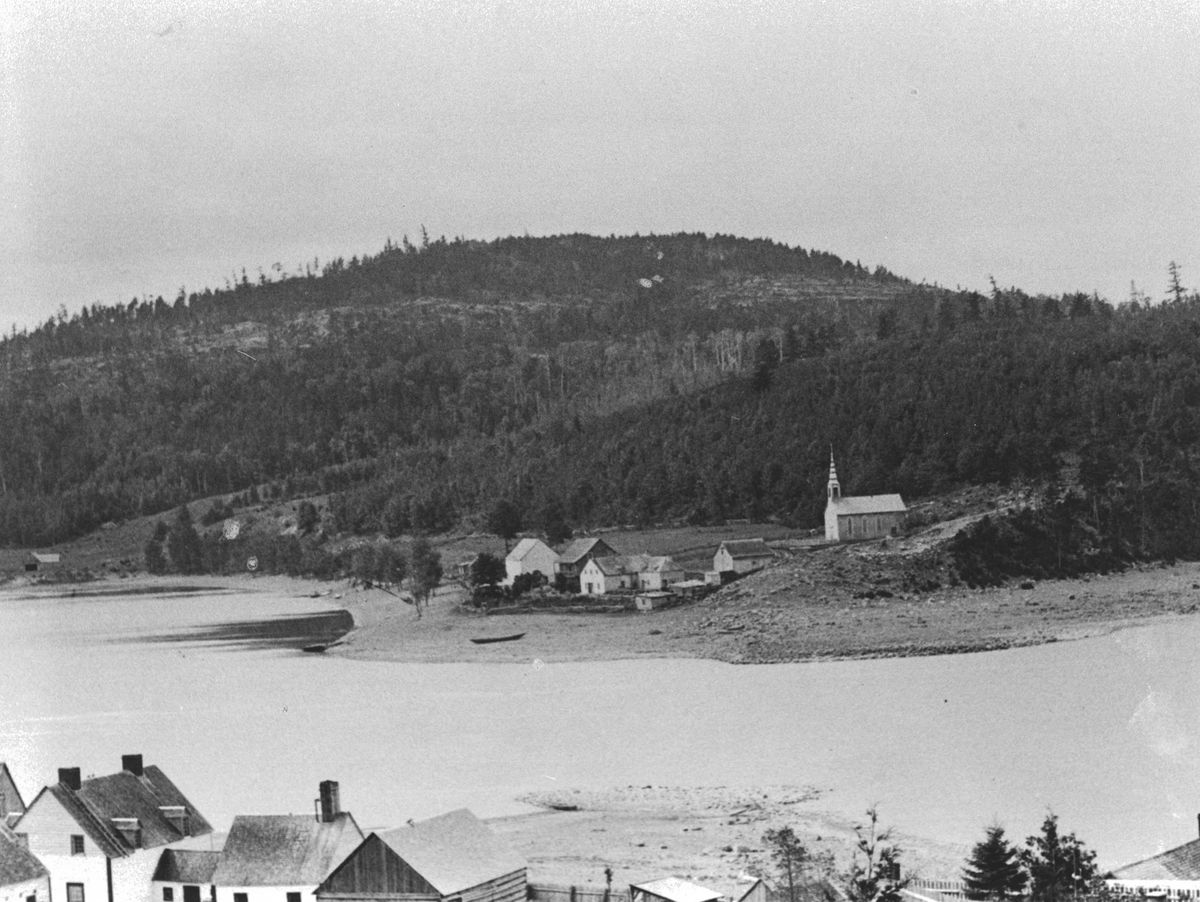 Missions were established in all areas penetrated by the French. This included the Iroquois country, James Bay, the western Great Lakes and beyond. The French orders and societies that worked among the Indigenous people also served the colonists of New France.

The Old Mission is considered by some as being the seed of Catholicism, education, healthcare, language, culture and agriculture in the region.

In 1836, the Hudson’s Bay Company – located on the Quebec shore – provided chapel space to the Oblate Fathers who came to the area for a mission once a year. Hence, the Aboriginals who came to trade their furs seized the opportunity to also tend to their spiritual needs.

In 1863, the Oblate Fathers were granted permission to open a mission at the edge of Lake Temiskaming, in Ontario, in front of Fort du Québec, occupied by the Hudson’s Bay Company. After travelling for ten days, Fathers Pian and Lebret arrived, and started their chapel. Other buildings followed. Seeing so much suffering to ease, they called upon the Grey Nuns of the Cross for help.

The Nuns cared for the sick, helped the elderly, taught the orphans to read, and so much more. Settler families arrived, and would often lodge at the Saint-Claude Mission. Men who were hurt in the logging camps would go to seek medical attention. Everyone – Aboriginals, first settlers, lumberjacks and the ill, regardless of language or religion – was warmly welcomed.

In 1887, the Mission was moved to Ville-Marie as settlers were inclined to open up their land on the other side of the lake. The Sisters opened the hospital and their works continued there.  St. Claude Mission was the embryo of Catholicity, education, hospital, language, culture and agriculture in our region.

The plaque we see on the grounds is the first bilingual plaque in Ontario erected on August 15, 1965 by the government. The cross was installed in 1991 by the Heritage Society and St. Mary's Catholic Secondary School.

The 590 km Ontario portion of the Ottawa River from Lake Temiskaming to East Hawkesbury was designated as a Canadian Heritage River in 2016 for its cultural heritage values. The cultural hearland of the Algonquin people, the Ottawa River's history also includes its role as an important travel route for explorers and the fur trade, as well as its industrial use for logging and hydro development. The Ottawa River was also important to the development of Canada and the choice of Ottawa as the national capital. 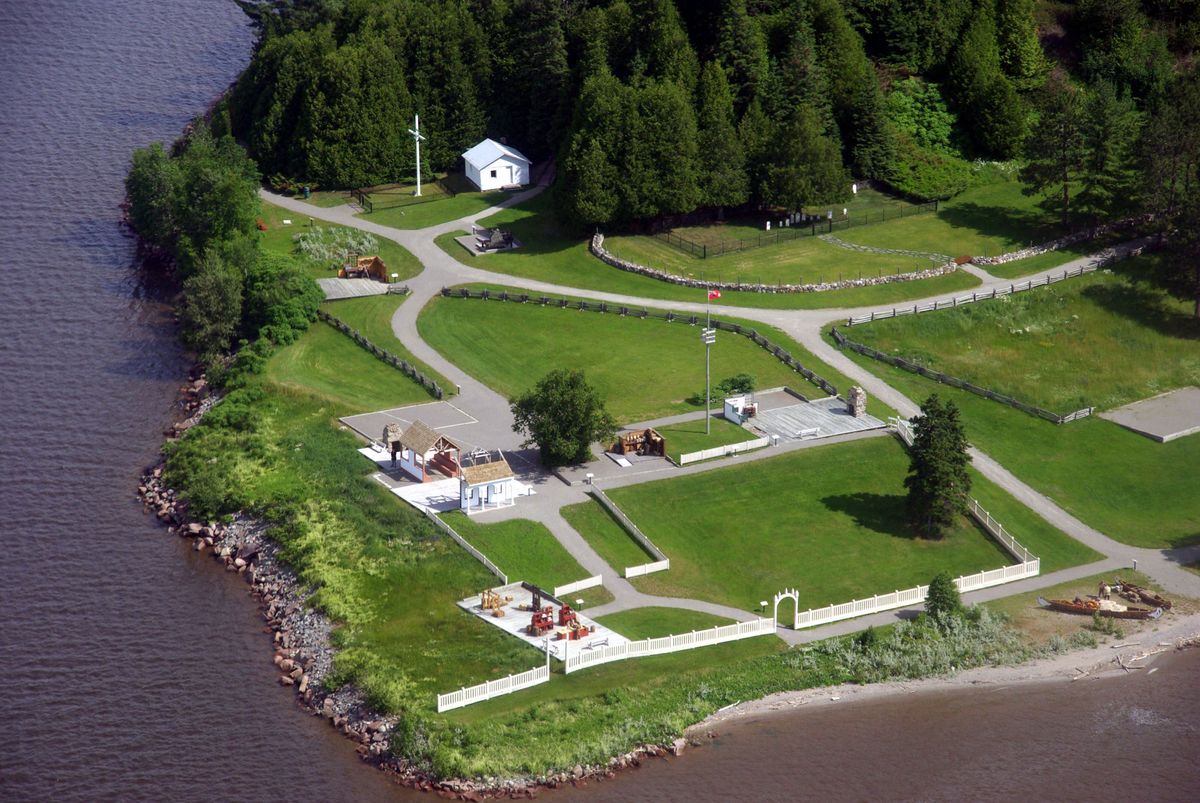 Just in front, the other side of the lake, the Fort Témiscamingue-Obadjiwan National Historic Site of Canada illustrates the important role the fur trade once had in the Canadian economy. 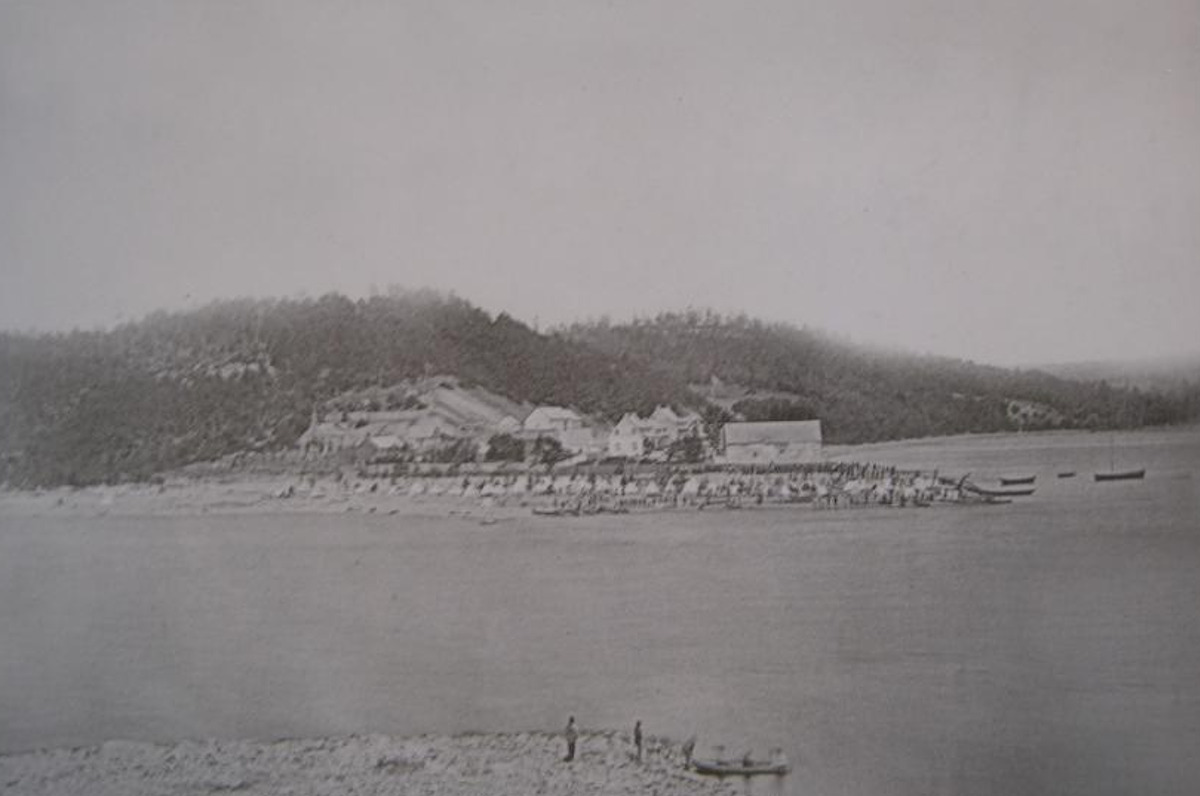 This shot of the Fort is the oldest photograph in Temiskaming. This place has been frequented for 6,000 years. It has served as a meeting and exchange place for the Anishinabe, French and English travellers who engaged in the fur trade, and French-Canadian settlers from Témiscamingue. 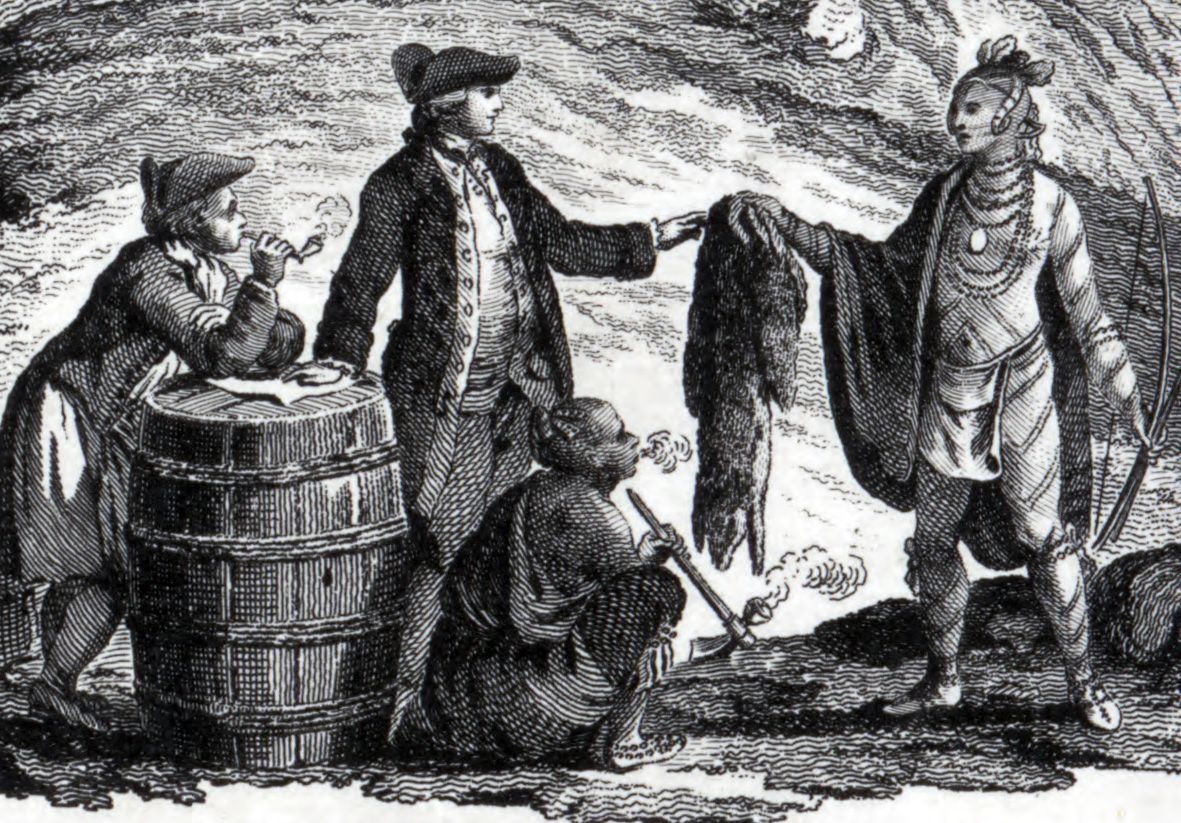 Historically, the fur trade played a singular role in the development of Canada. It provided the motive for the exploration of much of the country. The trade remained the economic foundation of Western Canada until about 1870. 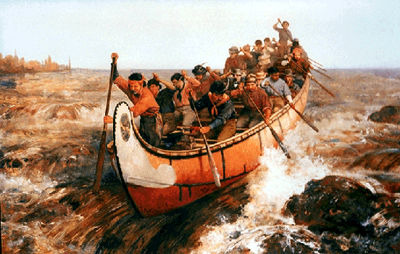 The men who fostered the fur trade with First Nations peoples were commonly known as les coureurs de bois. These trappers and traders worked for one of the two big fur trade companies: the Hudson’s Bay Company or the Northwest Company.

Lake Temiskaming acts as a natural border between Quebec and Ontario, and is a tributary of the Outaouais River, which crosses it from north to south. Missionaries and Indigenous people had long frequented Lake Temiskaming’s shores. Far before boats arrived, they would travel in birch bark canoes all the way to Hudson Bay.

In 1970, in remembrance of the fur trade, Parks Canada acquired the 66 acres of land that once comprised the trading post. Here, at the fort where the North West Company and the Hudson’s Bay Company were merged, French traders came to meet the Indigenous people. However, the arrival of logging companies pushed the animals from the forests, and furs became scarcer.

On March 30, 1686, the Chevaliers de Troyes left Montreal with the brothers Le Moyen and about a hundred men. They went through Ottawa, Mattawa, Temiskaming and Abitibi, and arrived at Hudson Bay on June 20th. Their mission was to take over the English trading posts that compromised the fur trade, with a focus on the St. Lawrence. The trip was deemed successful, since the troop seized forts in Moosonee, Rupert and Albany.
Get directions
QR code