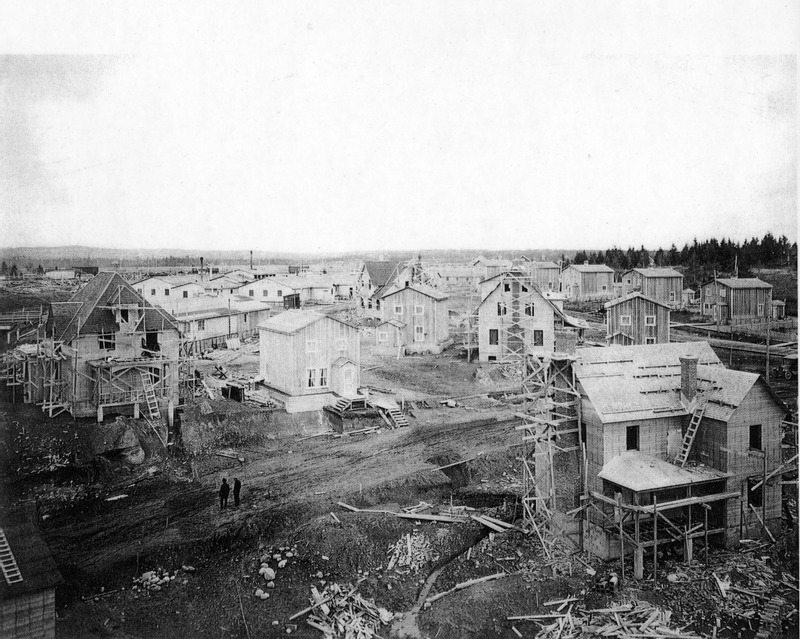 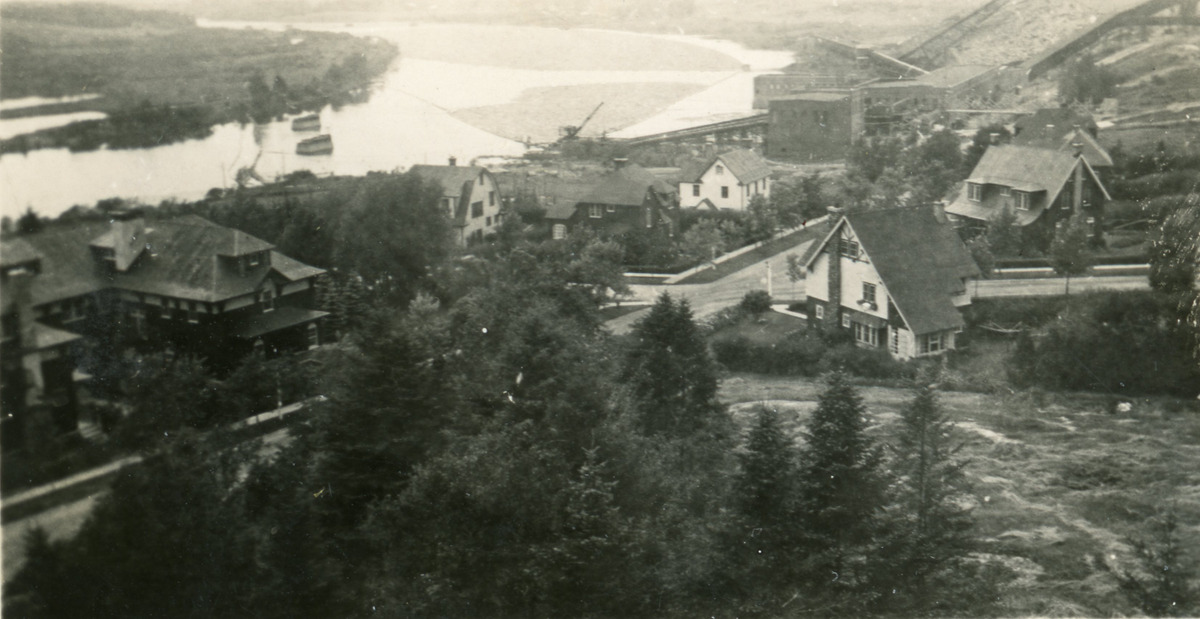 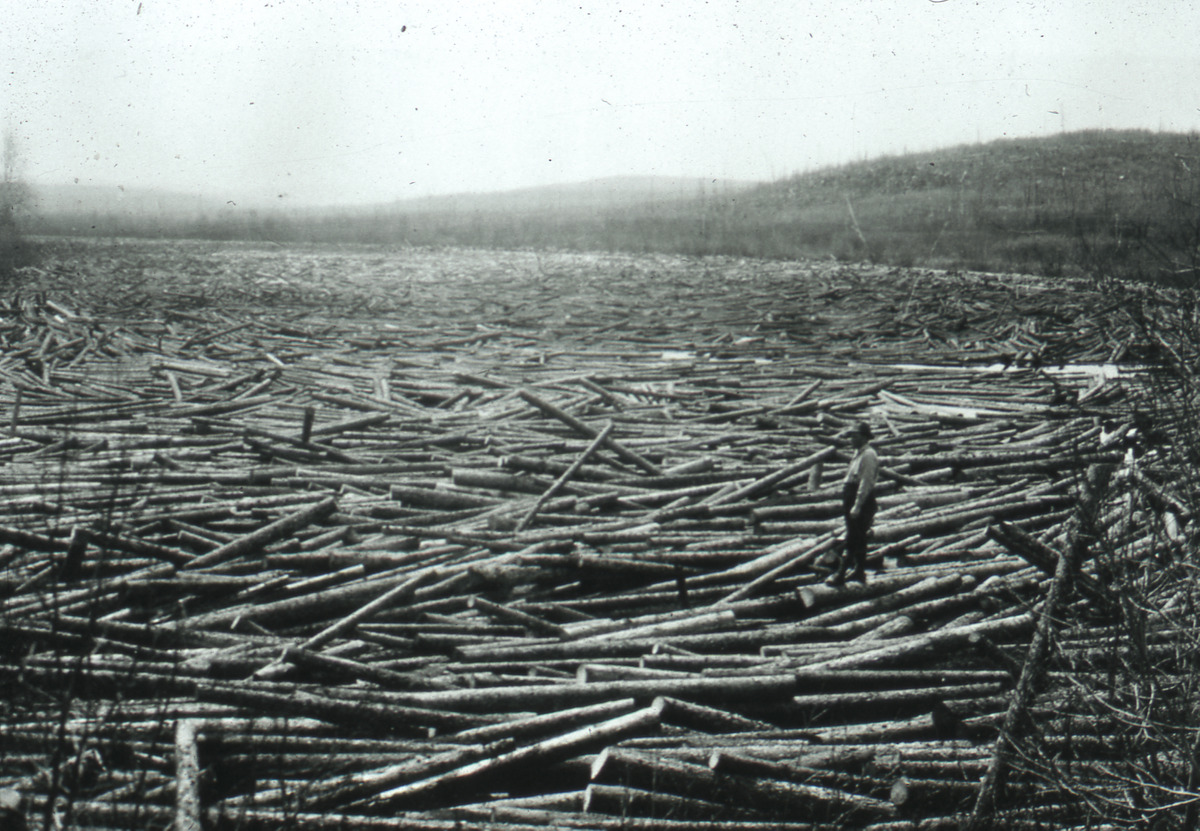 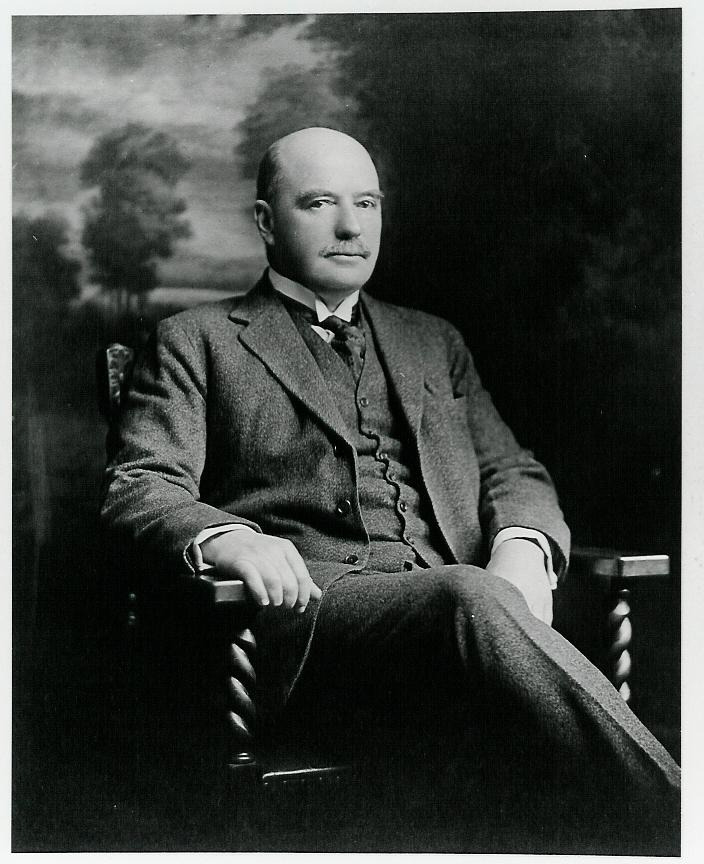 Construction of the pulp & paper mill, circa 1925 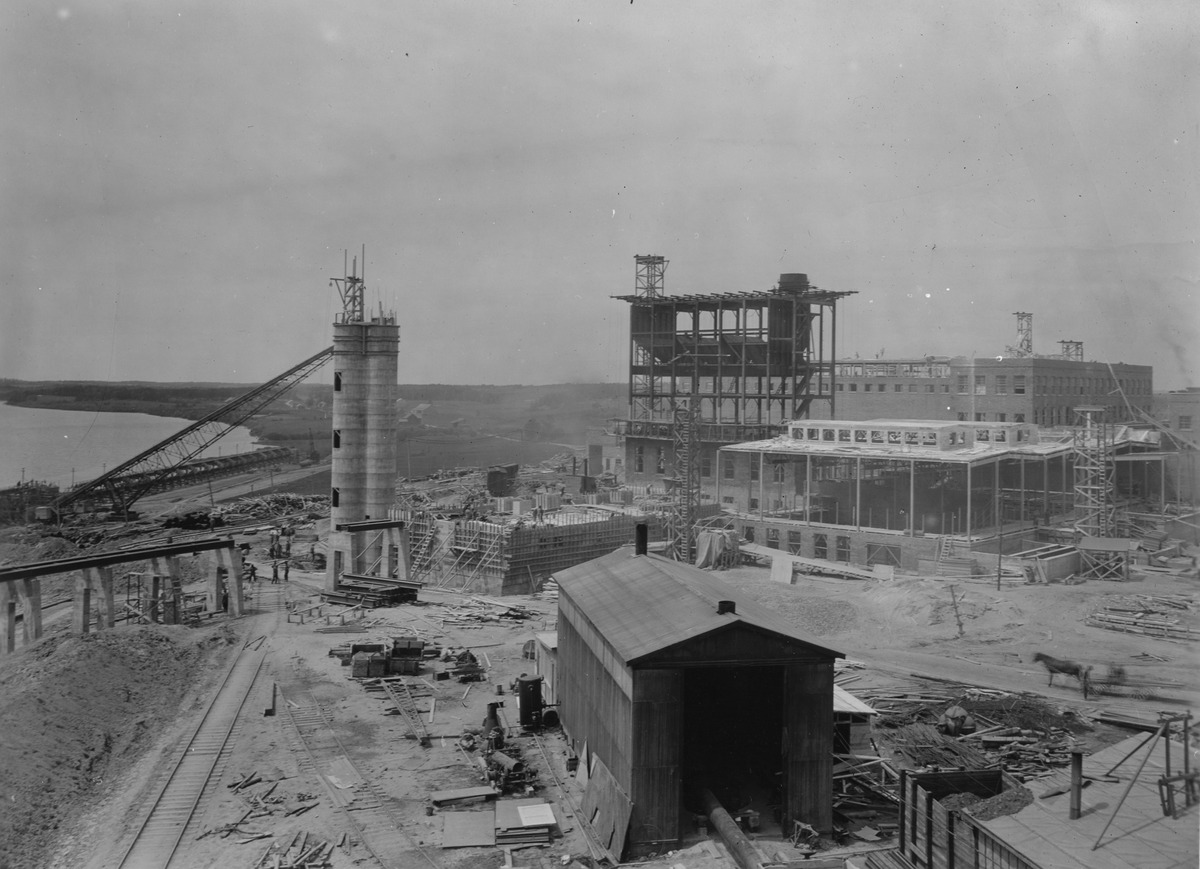 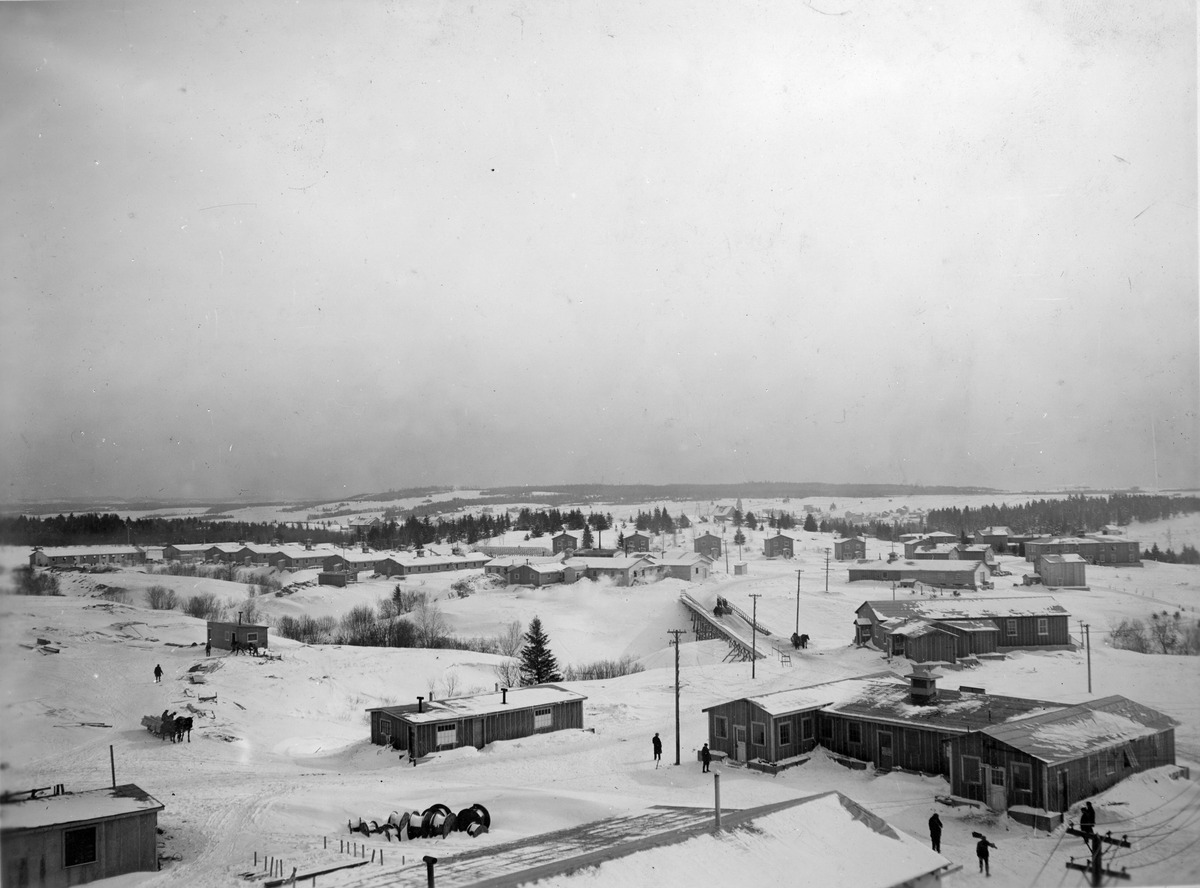 Construction of a home on Maloney Street, 1925 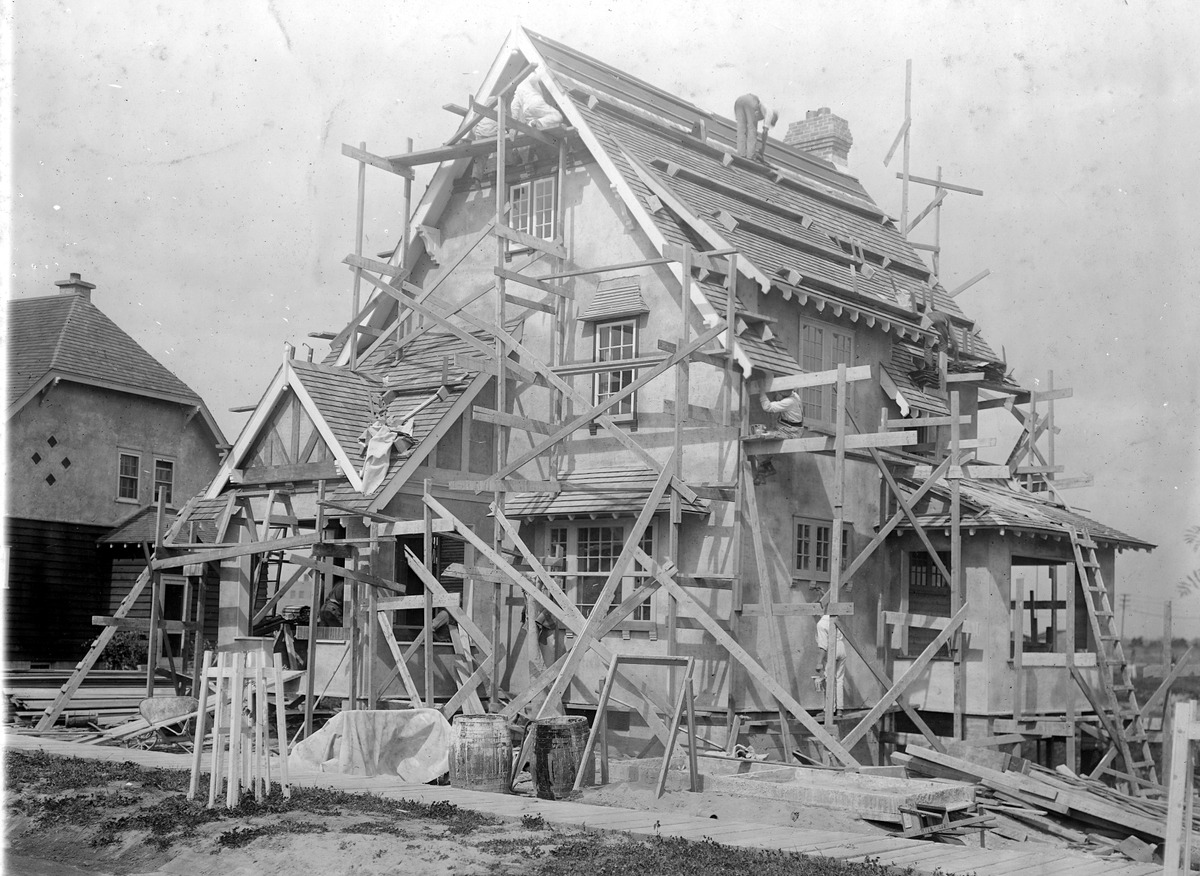 We are at the bike path entrance of the Riverbend Heritage District.
The Riverbend location was ideal for the establishment of a paper mill, at the very beginning of the industrialisation movement in the area. Additionally, the presence of a hydroelectric plant only a few kilometres away made it possible to power the facility. The raw material, wood, could be brought in by log driving on Saint-Jean Lake and Petite Décharge River, and then processed at the mill. In 1922, the businessman Sir William Price signed a contract with the Quebec Development Company, by which he agreed to purchase nearly half of the power generated at the new hydropower plant located at Isle-Maligne. The electricity was used to power the new Riverbend paper mill and to replace coal as a power source for the Kénogami mill.

The Price Brothers company built the paper mill, as well as the town. Riverbend was termed “company town”, because it was developed by an enterprise to house the workers employed at its industrial site. In the summer of 1924, the company constructed temporary lodgings for the workers hired to build the mill and town – over 1,000 men were employed for the construction work. The new town’s layout was carefully planned, both in terms of residential architecture and land development. It was built around a hill, and the streets were curved as a way to limit traffic speeds. Trees were planted to provide greater tranquility and privacy, and to give the town a more natural appearance. The first sidewalks were made of wood. The residents said they were heated, as the heat pipes for the mill were run underneath the sidewalks, which caused the snow to melt. In an effort to give the town a more natural-looking landscape, the power distribution wires were buried. Company management homes were built on Price and Maloney Streets, and the foremen’s houses were located on McNaughton and Ricken Streets. The labourers for their part lived in the Naudville and Saint-Joseph d’Alma areas.

The occupants of Riverbend homes were renters because the houses were owned by the company. This was fine for the qualified workforce, who could more easily change locations according to employment demands. For the company, ownership of the houses allowed keeping the homes in good condition, along with the rest of the town. Management staff who wanted to live in Riverbend could make a request in writing for their rent to be deducted from their wages.

The company hired young people for minor jobs: they mowed the grass, collected trash, and cleared snow. Upkeep of the houses was hired out to contractors and professional painters. Coal for heating was supplied and delivered by the company and deducted from the resident’s wages. In addition to the water distribution and sewer systems, the company built a 50,000-gallon water tower.

There were no stores along Riverbend streets. However, from 1930 onward, the company operated a small store called Saguenay Store, located just outside town limits.

Between 1960 and 1970, the company divested itself of the town’s buildings, selling them to residents. In 1962, Riverbend merged with Isle-Maligne, Saint-Joseph d’Alma and Naudville, to form the City of Alma.

In 1995, the City of Alma adopted a regulation to protect the architectural value of the old company town’s houses, which were “typical” of similar homes built across Canada in the wake of natural resource and industrialisation projects. Today, every one of the houses is privately owned and meticulously maintained. The residents are proud of their borough. A citizens’ committee has been in place for several years and, in collaboration with elected officials, endeavours to upkeep the town’s unique and original architectural and scenic heritage.