In Memory of the Deceased 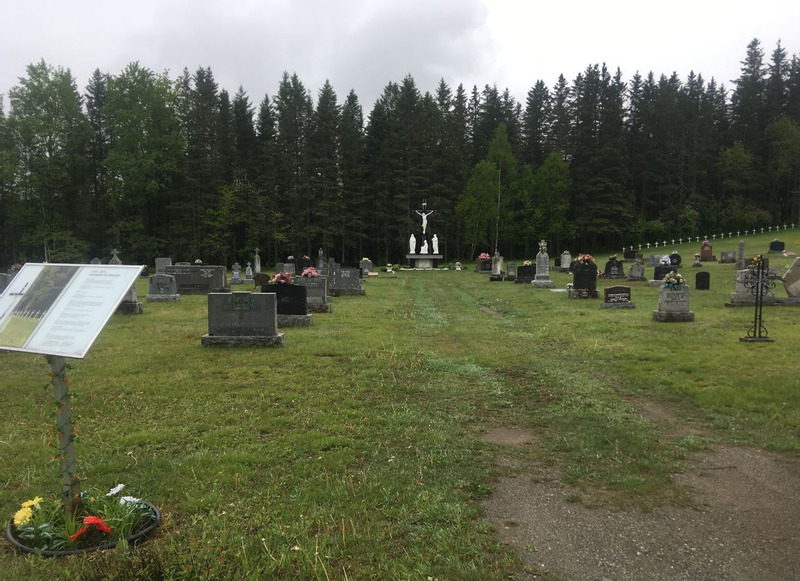 The Relocation of the Cemetery 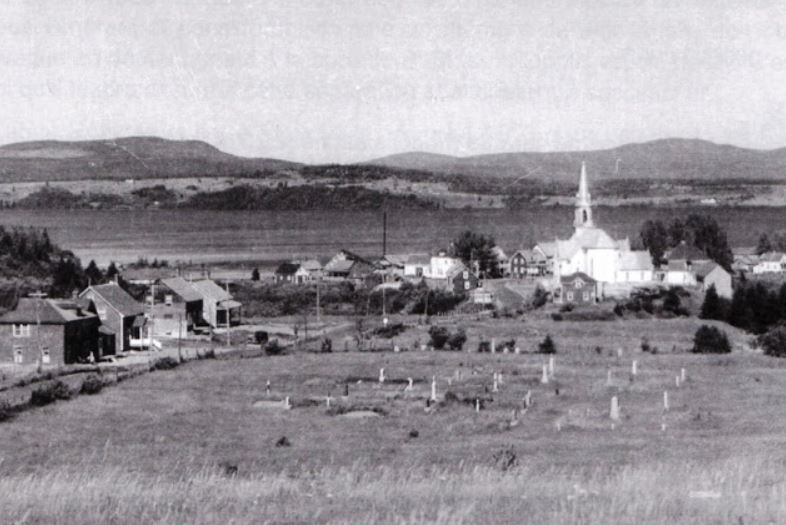 Like the church and the village, the cemetery has also been moved. It was first located near the white cross that marks the old village (see point of interest #11).  While the village moved from 1907, the tombs were only moved to the new cemetery around 1925.

On the occasion of the centenary of Piopolis, wooden crosses were made in homage to the deceased of the old cemetery. 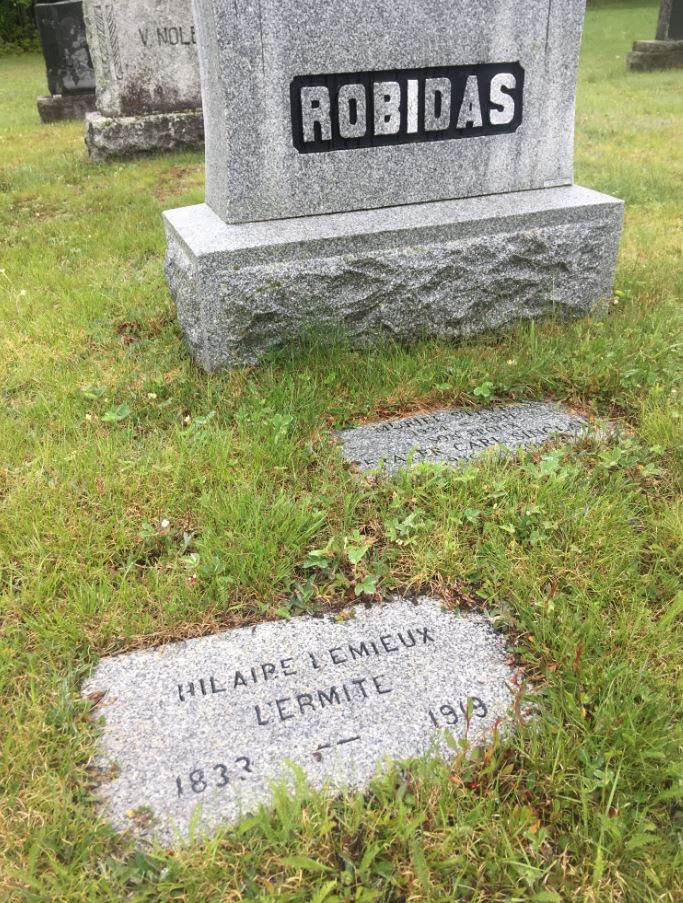 In the lot of the priest J-A Robidas, an old man which is still remembered today found his last home. He is part of the folklore of Piopolis.

"He was curious as a man. The hermit was someone who came by chance, someone who dragged a whole past of stories and misfortunes on his back. Just to see his deep eyes, one could feel his destiny. His life was a long passage on earth where his only two loves were his boat and his hut. » 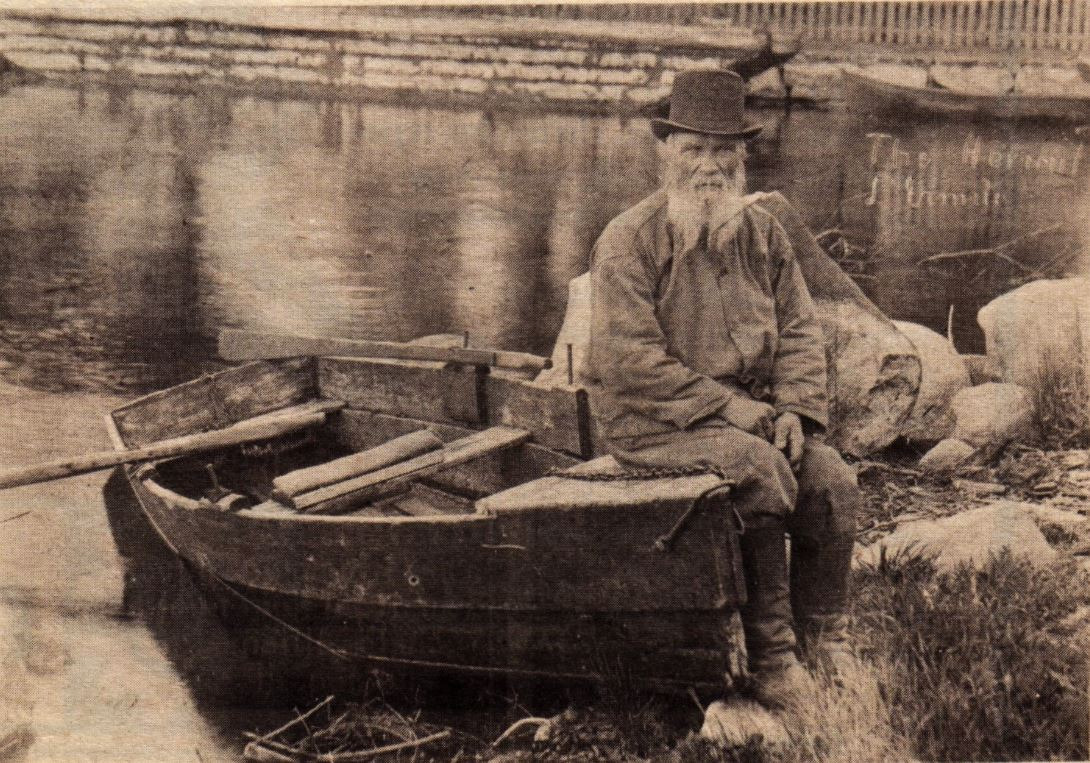 As a young man, Hilaire Lemieux seemed destined for a bright future. Born into a respectable family in Lévis, he had studied at the Séminaire de Québec. Handsome boy, he was appreciated by the ladies of that time.

While he was known to be in love with a very pretty girl, he disappeared one morning and never returned. The girl, who would have been the unconscious author of the hermit's misfortune, died without ever having embraced marital status, where she repeatedly refused to enter. 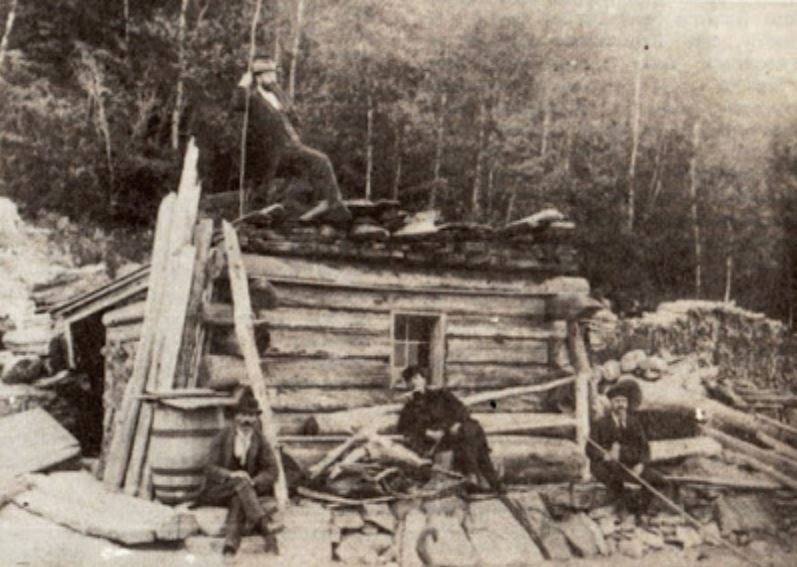 On a bank of the lake today called  "pointe de l'ermite", Hilaire Lemieux lived in in a wooden hut. By the time the settlers arrived, his home had already been built and a piece of land cleared.

In his cabin, he had only a few modern items: a padlock at the door, a workbench, a rifle, a small tin stove, a two-handed saw, an axe and a helmet. He slept on a sheepskin and kept two barrels filled with small ash trees near the hut; a supply of wood and fish heads.

The hermit lived of fishing and knew the language of the lake better than anyone else. He spent most of his time, day and night, watching the sleeping lines. He would sell his fishes to people from the village and crossed the lake once a week, on Thursdays, to sell his fish in Lac-Mégantic. We chose, we paid and we went away: the hermit was not very talkative.

Yet he spoke well and was highly respected by everyone. He looked like a good boy, but with the look of someone who distrusts everyone. From time to time, he would look at you sneakily, and if it were not for his small size, this look would be embarrassing for the one to whom he is addressed.

It is said that during his outings, if he saw a woman walking in his direction, he would turn back and walk away growling.

The only one to whom he opened himself was the parish priest. The hermit attended mass every Sunday, he had his right chair and kneeling at the back of the church.

The hermit was an inexhaustible subject, but his breath ran out on June 1st, 1919. He was not at the Sunday mass: he was found lying in bed, a cauldron of soup sleeping on the stove turned off. He was laid on boards placed on the seats of a boat, and he was mounted to exhibit him in the presbytery of the village. The priest J.A. Robidas celebrated his service, and his body was brought to the cemetery.

At the time of the centenary of Piopolis, the old people still remembered this man esteemed by all. Their testimonies can be found in the centenary book of  Piopolis. 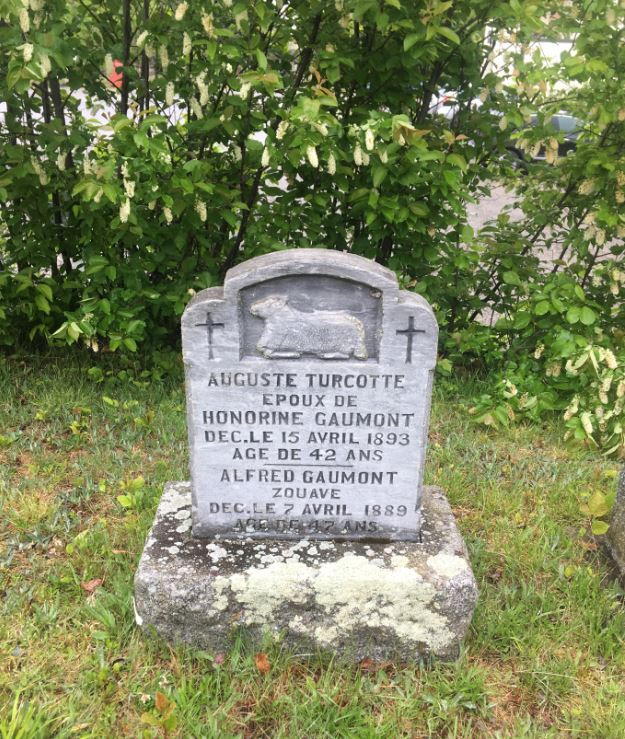 Alfred Gaumont was among the 14 Zouaves who came to Piopolis on their return from Europe. His grave is located at the left end of the cemetery.

Originally from Sainte-Julie-de-Somerset, he was 29 years old when he arrived in Piopolis.  Because of his poor health, he has only begun clearing his lot. He died in 1889 surrounded by his family and is buried in the old cemetery. He was then moved to the current cemetery in 1925. He is the only Zouave buried in Piopolis.

A Personalized Grave for Laurier Gauthier 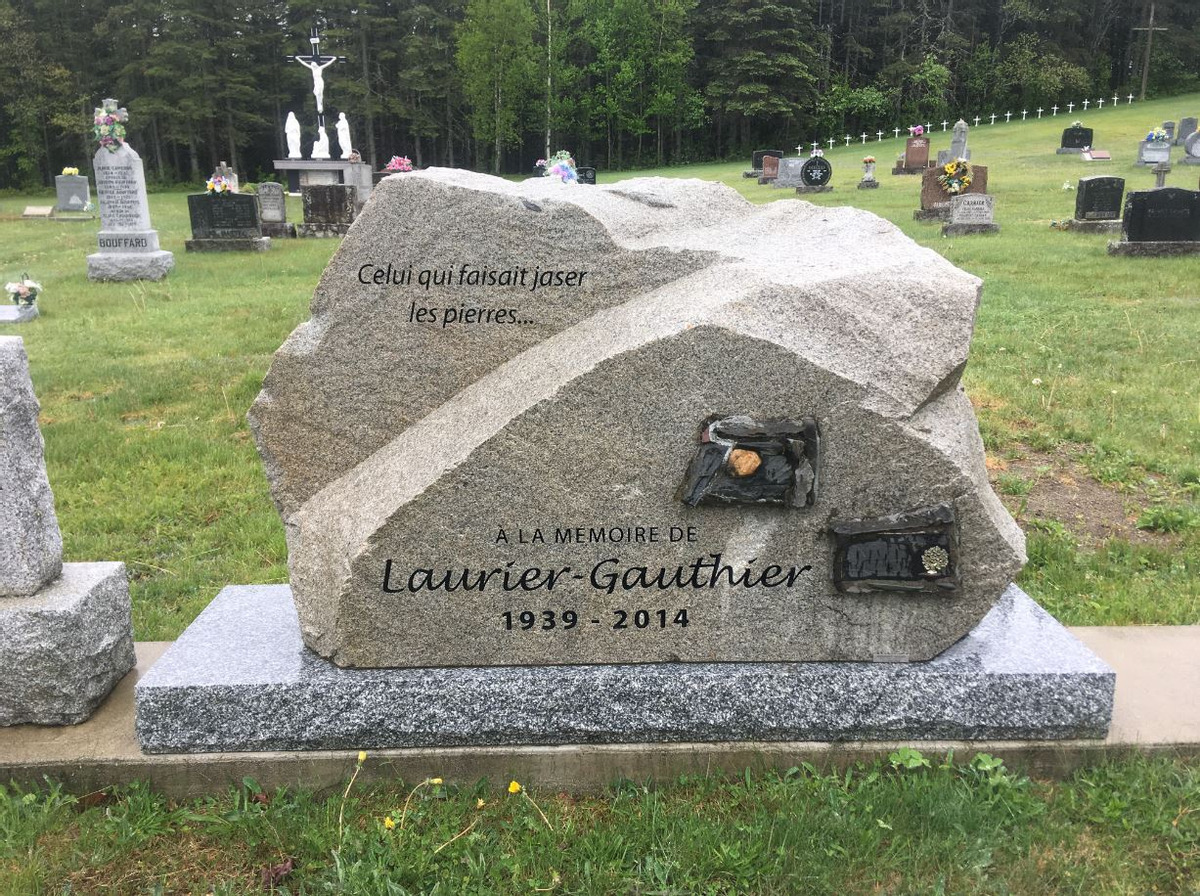 Placed in evidence, this grave evokes the passion of Laurier Gauthier, a proud citizen of Piopolis. It is here that rests the stone sculptor to whom the cultural house owes its name. 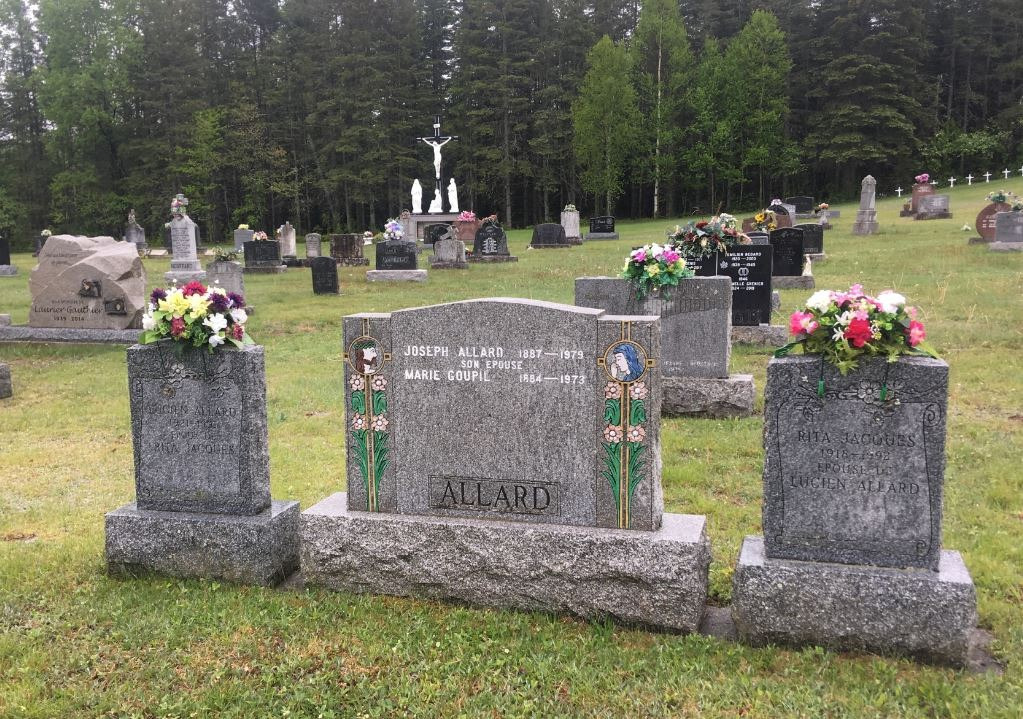 Joseph Allard, nicknamed Jos Allard, was a cook in lumber camps in the early 20th century. He had an austere and severe reputation that stuck to his skin across the region.

Life in the lumber camps was difficult and dangerous and the living conditions were rather rudimentary. Life was governed by a harsh code of conduct, which produced robust, such as Jos Allard.

The legendary cook died in Piopolis, at the age of 92. He then lived at the entrance to the Rang des Grenier.

Now you stand in front of the Piopolis cemetery, a place steeped in history. If you are a fan of this kind of visit, you will undoubtedly be charmed by the old tombs, which are sometimes barely visible on the ground, and also by the more recent ones which allow us to imagine a little more about the village and on those who shaped it.

It was located near the white cross that marks the old village, which you will know best at point number 11. While the village undertook its move from 1907, the graves were only moved around 1925, in the greatest respect.