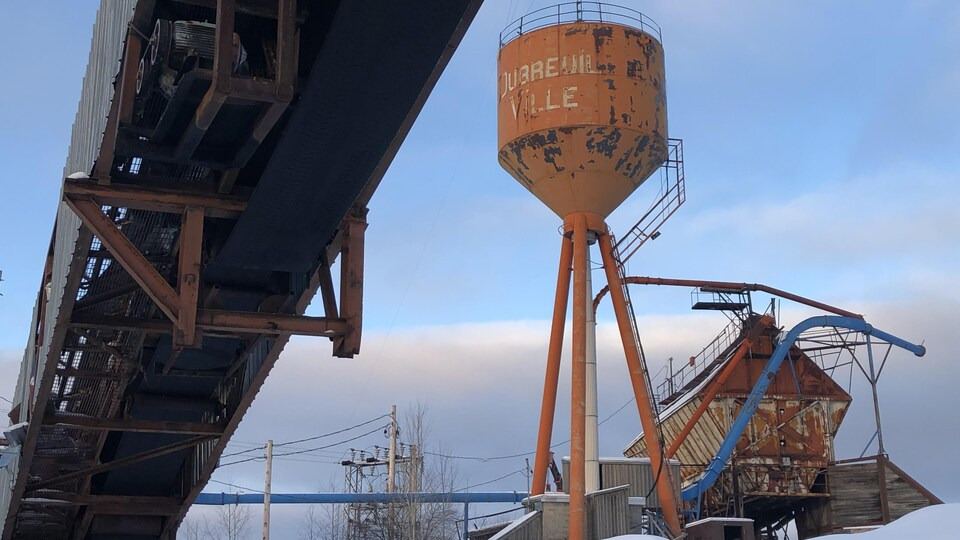 This site is a former site of Dubreuil & Brothers. The sawmill and forestry operations were at the origin of the establishment of the community of Dubreuilville.

Historically, French-Canadian families were Catholic and therefore had many children. The Dubreuil family was no exception. Cécile Landry and Joseph Dubreuil were married on July 26, 1909 in Ascot Corner, Quebec. They raised a large family of nine children: five girls and four boys. Joseph supported his family with his woodworking shop and small sawmill in the Abitibi region.

It is through these two establishments that Mr. Dubreuil transfered his knowledge before his death in 1945. Aged 17 to 34, the Dubreuil brothers pooled their knowledge and talents to financially support their mother and their own families and thus the Dubreuil et Frères Enregistrée company was created.  It manufactured doors, frames and small furniture.

At the time, it was common for a logging company to move its equipment to each work site. In 1948, one such move would change everything for the Dubreuil family: the big move from Quebec to Ontario. 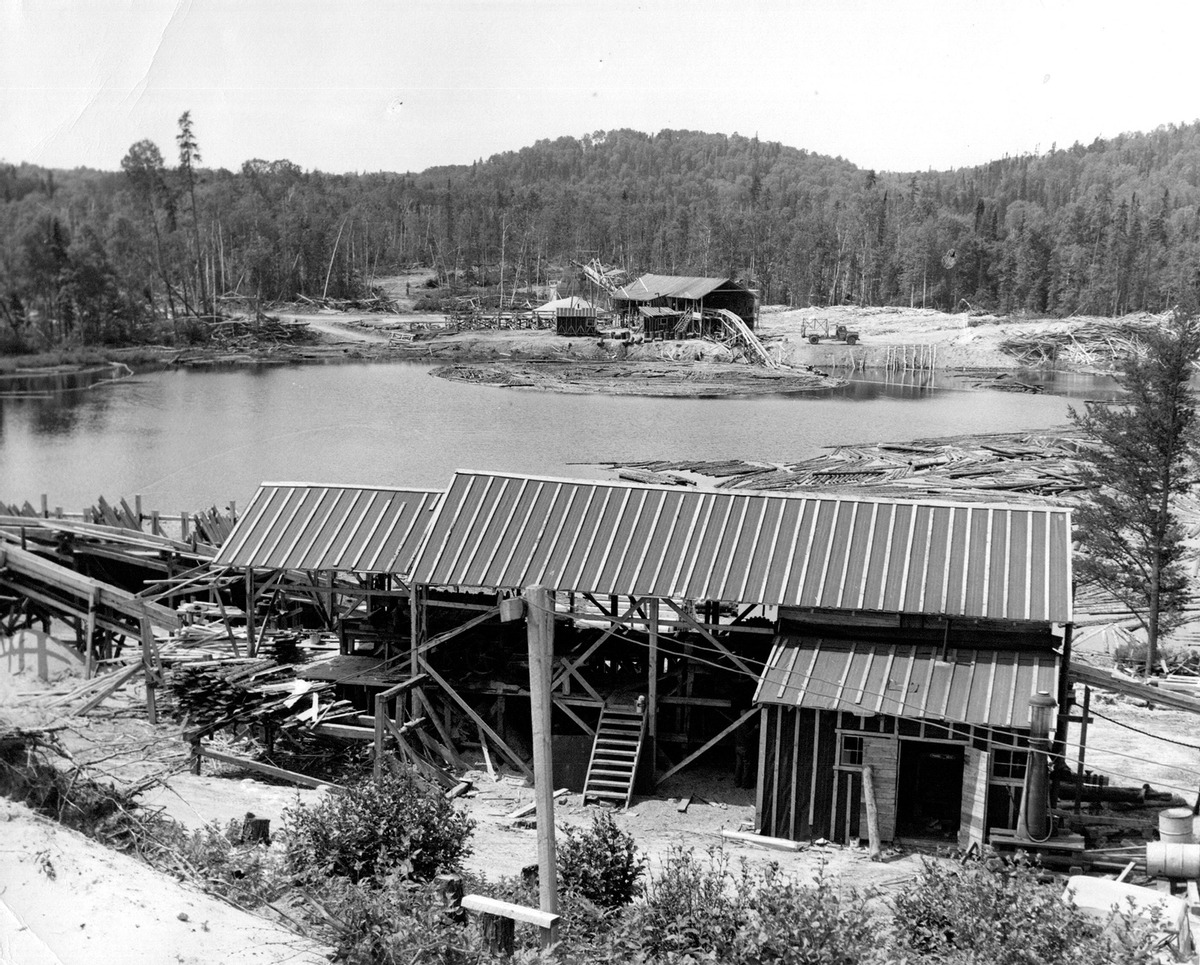 Dubreuil & Brothers first obtained a contract near Timmins and a second near Kirkland Lake. Despite the difficulties, the determination and expertise of the brothers yielded positive results.

In 1949, Dubreuil et Frères Enregistrée obtained a contract to harvest carbonized trees in the Mountain Ash area, between Thessalon and Chapleau. Always on the lookout for new opportunities, the brothers signed a 15-year contract with the possibility of renewal in the Magpie forest, which began in January 1952.

From Frères to Brothers 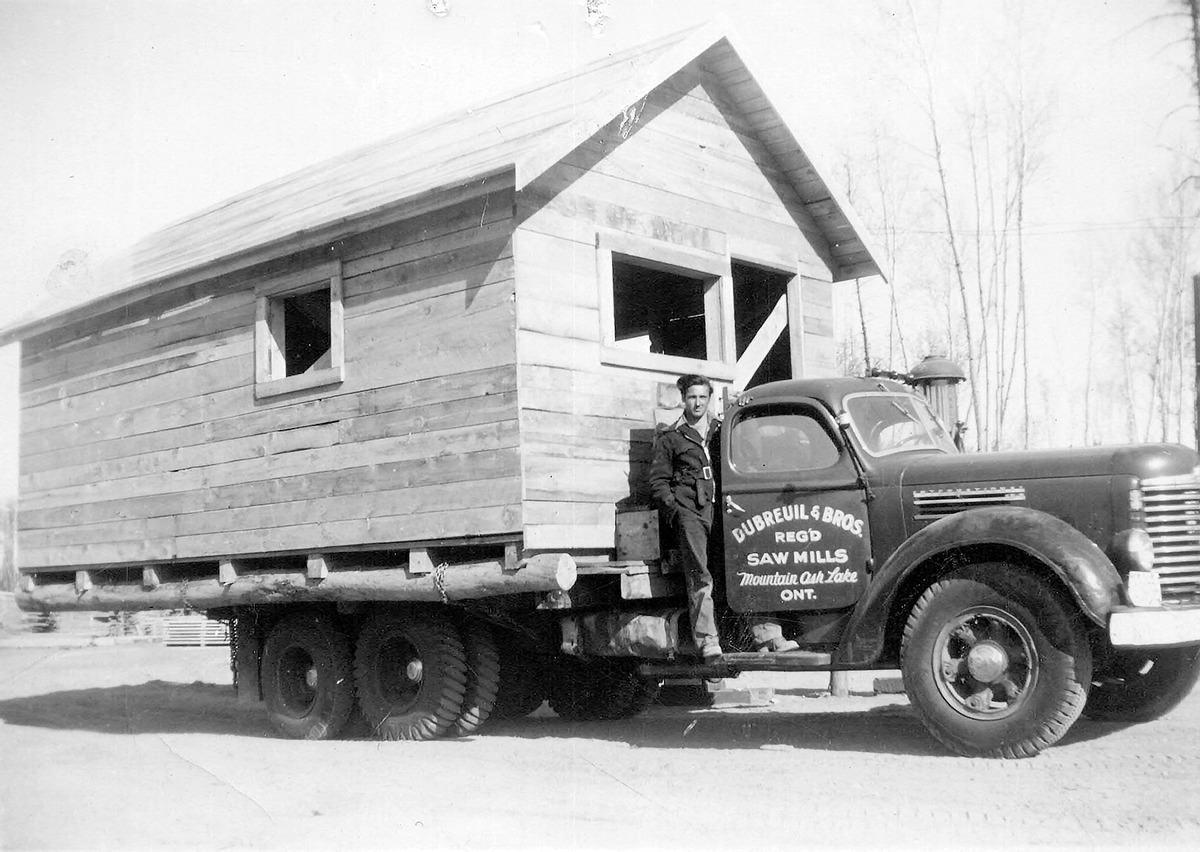 Dubreuil et Frères Enregistrée becomes Dubreuil Brothers Limited. With their operations running smoothly and the certainty of work opportunities for many years to come, the move to Ontario was final.

In 1953, since Ontario did not recognize French as an official language, all correspondence was in English. The brothers even had to use a French-English dictionary when negotiating and signing contracts.

Although located in an English-speaking province, the community fully embraced its French identity and language, forcing English-speakers who moved into the area to assimilate, which was rare in Ontario. Thus, the logging community (Magpie from 1954 to 1961 and Dubreuilville from 1961 on) was nicknamed Le petit Québec. 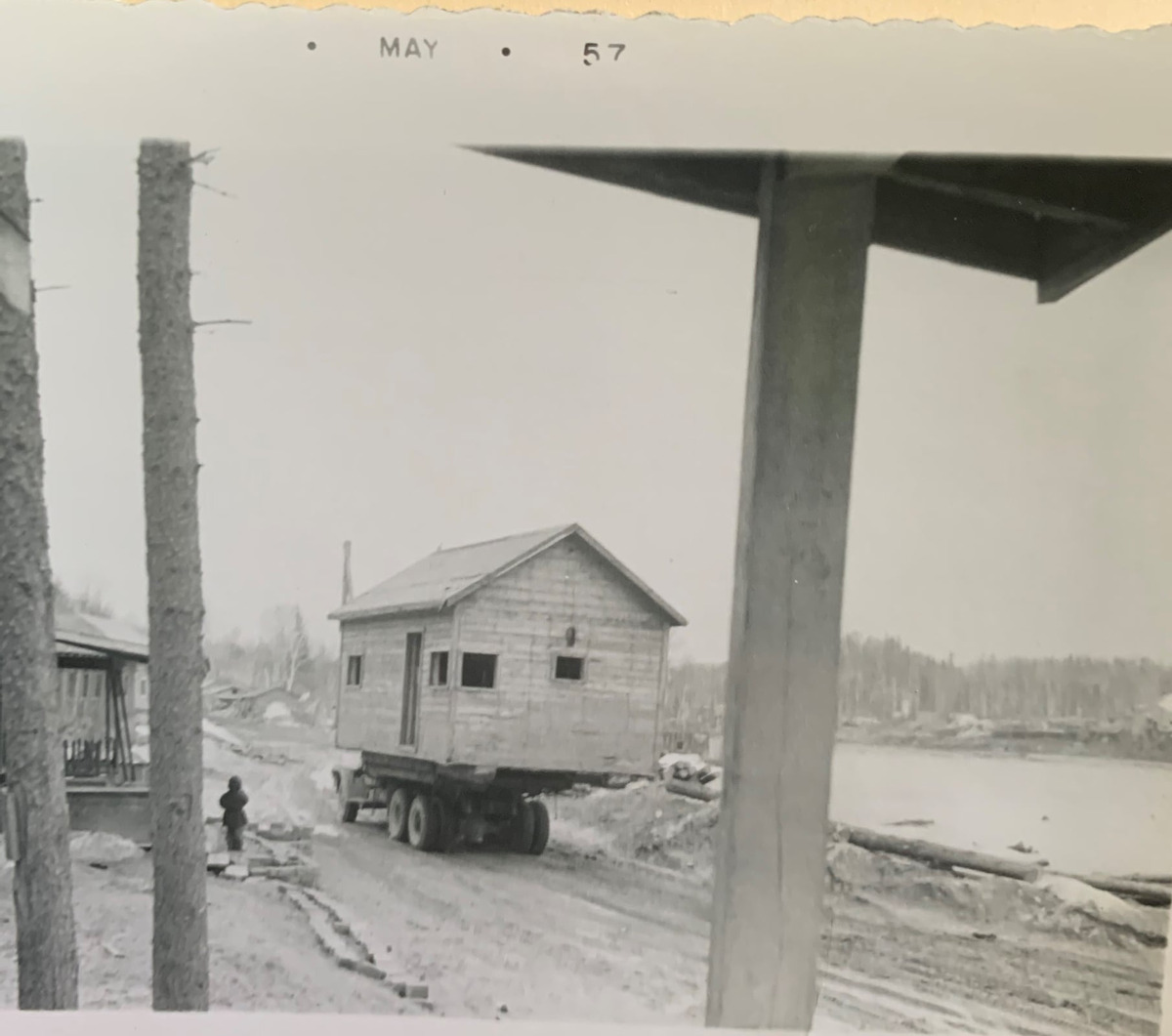 In 1961, the Dubreuil brothers obtained additional logging rights twenty-three kilometers northeast of the Magpie town site and decided to relocate the entire community.

Napoléon Dubreuil, the eldest of the brothers, was very attached to offering the employees the best quality of life possible. Hence the establishment of a permanent village near the sawmill. 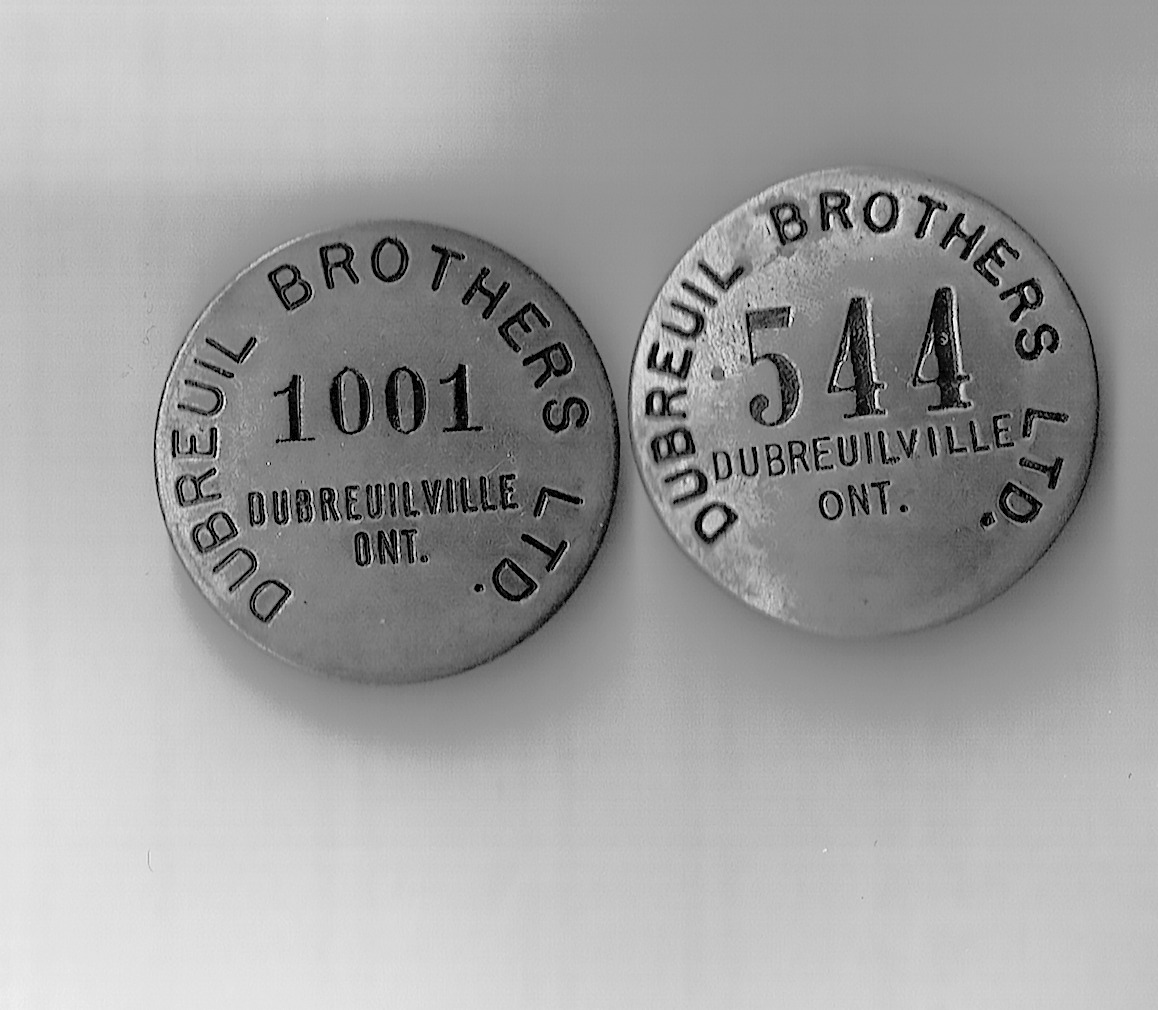 Dubreuilville was a company town. There was no need for money to purchase items on your shopping list, purchases were recorded and then deducted monthly from employees' paychecks. Dubreuil Brothers employees were required to provide their badge number to cashiers at the local grocery store to make purchases. 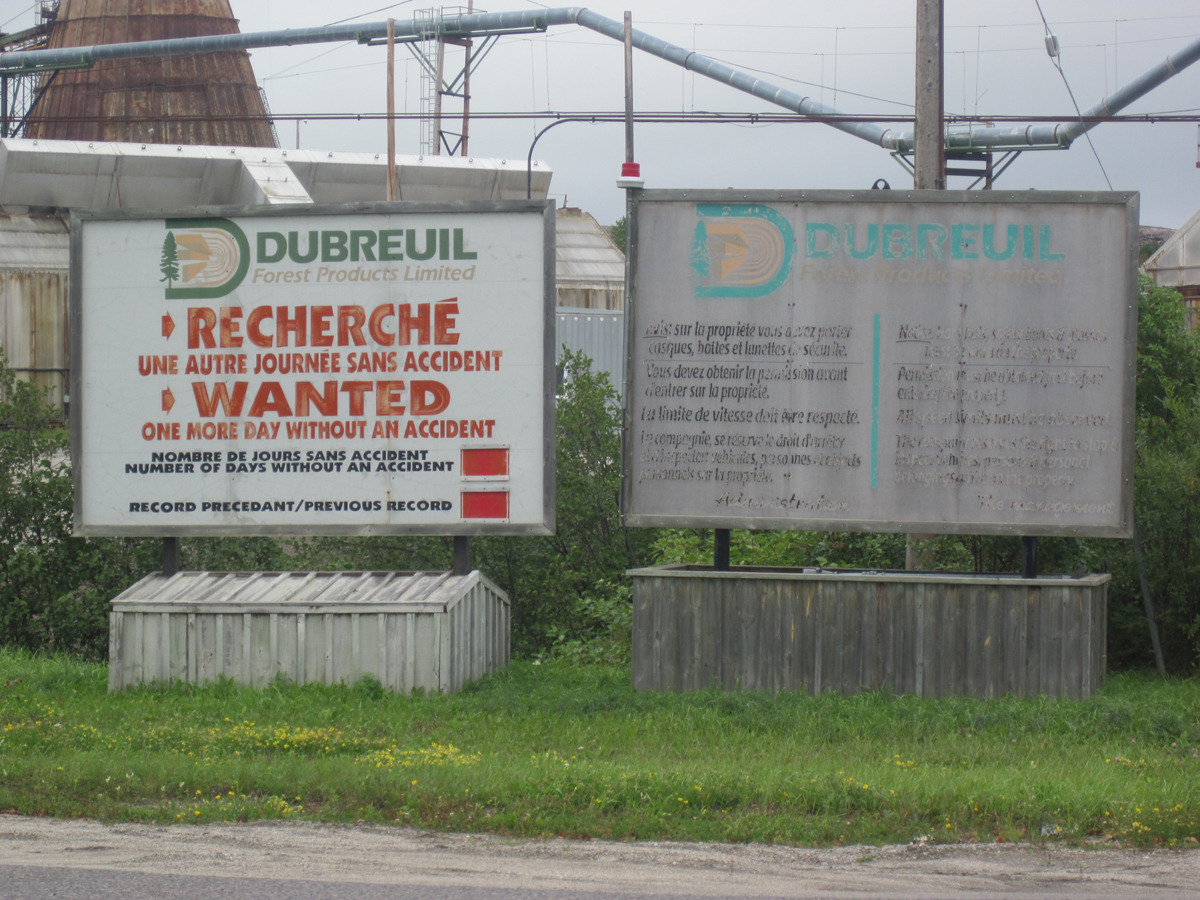 By 1989, Dubreuil and Brothers employed over 400 workers before selling the company to the Buchanan Group and James River-Marathon who renamed it Dubreuil Forest Product Limited (DFP). At its peak in 2000, the company employed 570 workers.

DFP faced many challenges, including the renewal of the Canada-U.S. Softwood Lumber Agreement in 2000, which imposed new tariffs on Canadian wood; a significant increase in electricity costs in 2002; and the denial of stumpage in 2004. These were difficult times for the forestry sector. The PFE eventually closed in 2008. In Canada, 400 sawmills were forced to close between 2004 and 2009.

Of the eight mills Buchanan owned in Ontario, DFP operated the longest. The owner's son, Ken Buchanan Jr., said it was "one of the best in eastern Canada, one of the most productive, with a good workforce.

Extract of
Historic Tour of Dubreuilville