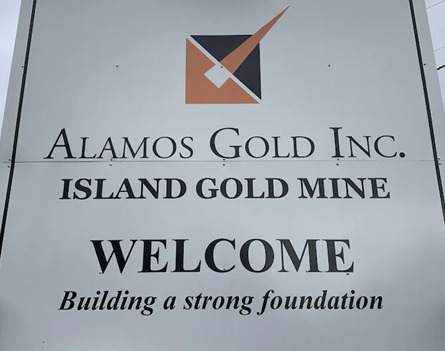 This underground gold mine owned and operated by Richmont Mines began commercial production in 2007.

ong before the arrival of the forestry industry, mining exploration was booming. In fact, precious metals have been mined in Ontario since the late 1800s.

The Canadian Shield, which extends into the Arctic and covers much of Nunavut, Labrador, Quebec and Ontario, is one of the richest areas in the world for ores and minerals, and Dubreuilville is located at its center. It is therefore not surprising that so much mining activity has taken place in the region for over a century. One of the main reasons for this is that railroaders discovered veins of gold, silver, iron, nickel or copper while digging and blasting to build the tracks that cross the area. 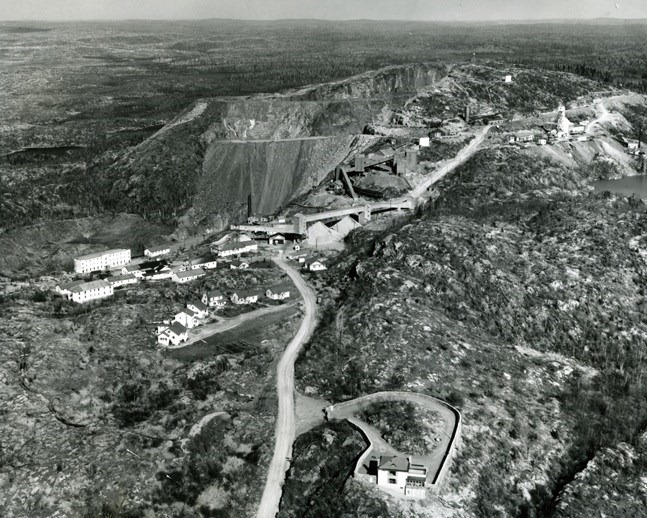 One of the oldest known mines in the Dubreuilville area is the Helen Mine, located just north of Wawa.

It was in the late 1800s that three prospectors found what they thought was gold. They showed their sample to American businessman Francis Clergue who identified it as iron. Clergue bought the land from the prospectors for $500 and opened the first large-scale iron mine in Ontario.  The mine operated from 1900 to 1918, when it was closed due to low profits.

It was not until twenty years later, when new mining methods made the operation more profitable, that the mine was reopened. The onset of war brought a high demand for iron and by 1950, the mine employed 700 people!

The Helen mine remained in operation until 1996, when it was permanently closed. Over the next two years, most of the buildings and machinery were demolished, salvaged or sold. However, those willing to make the arduous journey up the side of the mountain will still be able to find a few small remnants of the Helen Mine's glory days. 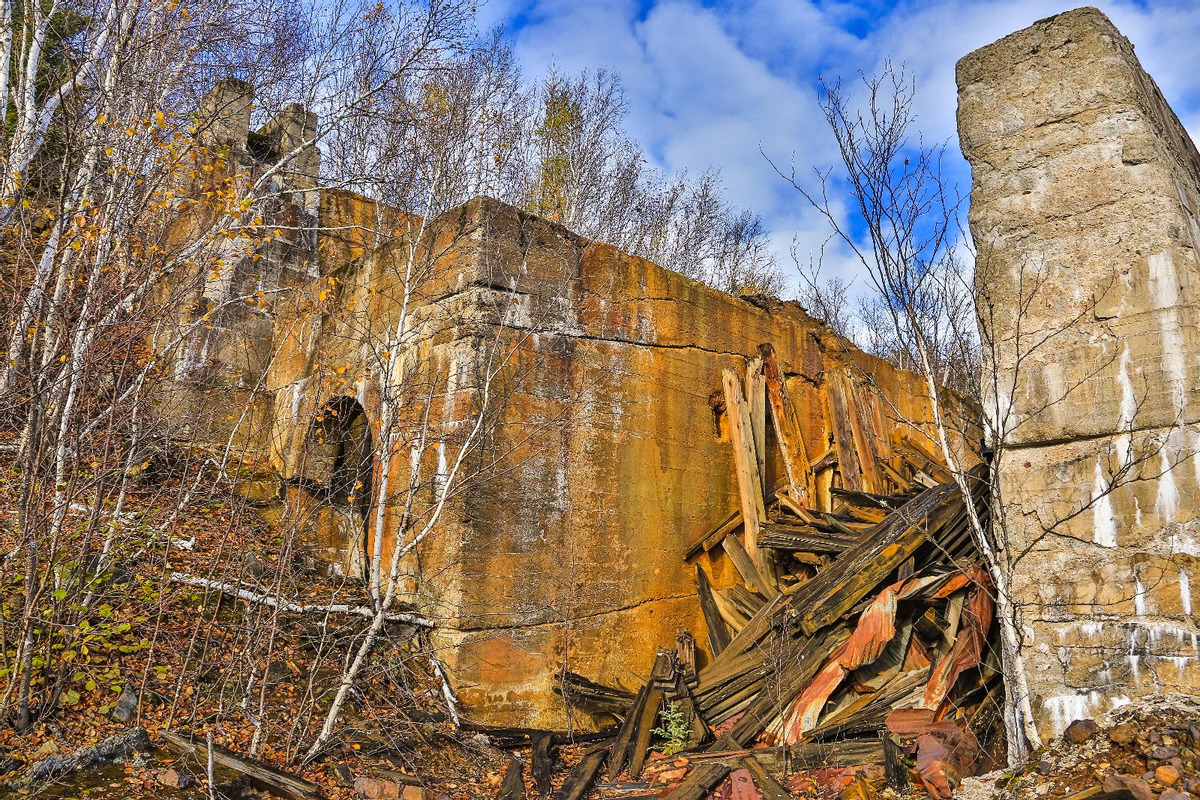 In 1912, the Algoma Steel Corporation built a mine, smelter and village at this location.

In 1909, almost ten years after the opening of the Helen Mine, a large iron deposit was discovered between what is now called Dubreuilville and Wawa. In 1911-12, the Algoma Steel Corporation built a mine, smelter and village at this location. The mine closed in 1914, but was reopened in 1915. By 1916, the Magpie Mine's production far exceeded that of the Helen Mine.  At its peak, the Magpie Mine employed over 225 people and the village itself had 600 residents.

The community consisted of 14 duplexes equipped with electricity, water and sewage, a luxury in those days. There were also three dormitories, a kitchen and a dining room for single men. To complete the picture, there was a small hospital, a school and a root house. By 1922, there was no more economically viable ore to extract and the mine ceased operations. 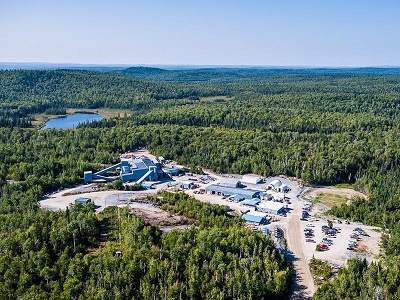 Mining activities resumed in the region in 2007 and today there are two operating gold mines and other exploration projects near Dubreuilville.

Projects currently in production or development include Alamos Gold's Island Gold Mine, Argonaut Gold's Magino open pit, Wesdome's Eagle River Complex in Wawa and Manitou Gold, which is in the exploration stage.

This renewed interest and activity has generated significant economic benefits for the region. Investments have been made to accommodate the influx of people and development.  The new dormitories, parking lot and mine kitchen that have been built in Dubreuiville for Island Gold Mine staff and managers are an excellent example. 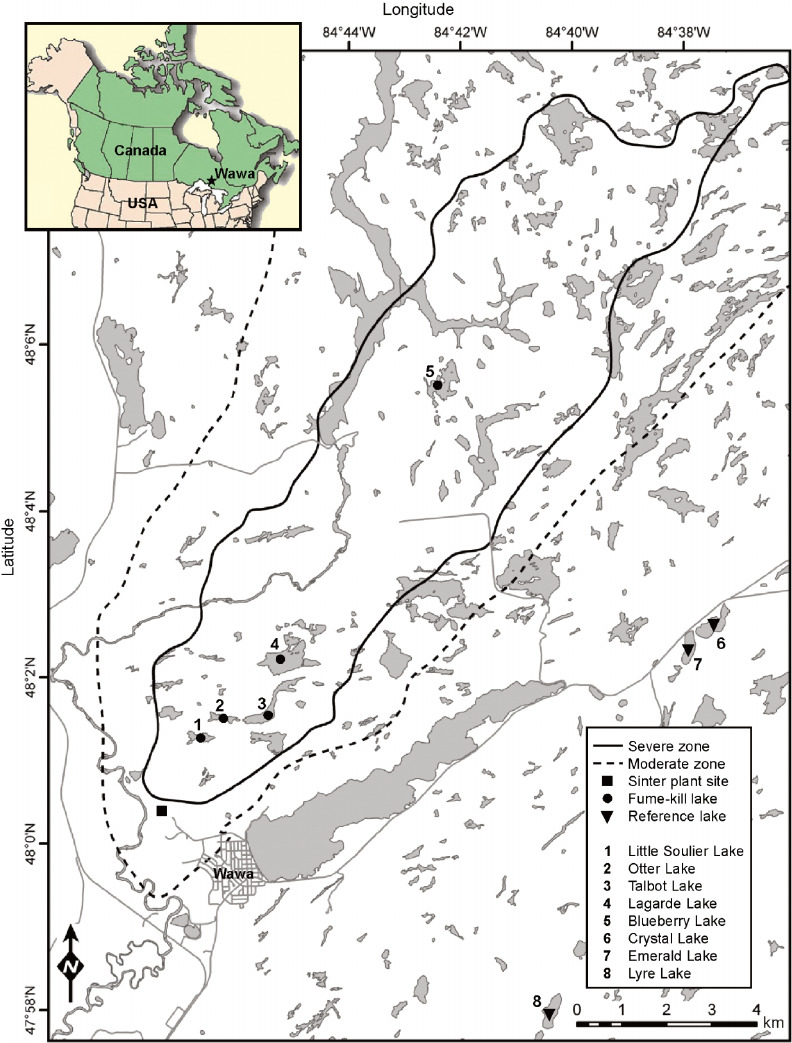 In the past, mining operations generated industrial pollution during their smelting operations. They released high levels of sulphur.

Mining practices have evolved over time. The pollution produced in the past had a devastating effect on the surrounding vegetation. Some lakes became too acidic for fish to survive. These areas characterized by eroded and barren soil are called badlands. These are still visible today between Wawa and Dubreuilville.

Since then, the industry has made considerable efforts to reduce its impact on the environment.  Companies and government have invested, and continue to invest, millions of dollars annually in research and development of new mining technologies and methods.

Innovations such as zero-emission battery-powered equipment and new approaches to land reclamation are a major priority, and Canada is considered a leader in this area.

Extract of
Historic Tour of Dubreuilville