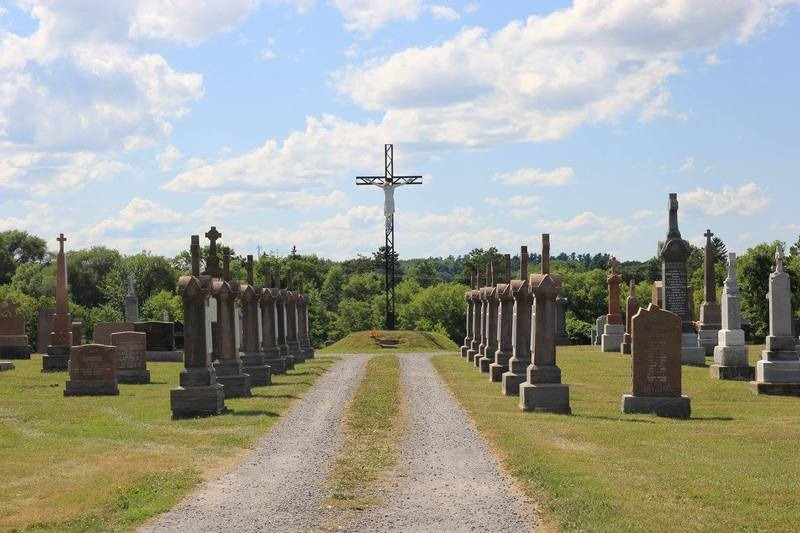 The old cemetery was located on the site of the current Sacré-Coeur Park, from 1750 to 1907, between the presbytery and the town hall. More than 9,000 bodies were buried there. The parish redeveloped the cemetery on this land at the end of Dugas Street in 1907 when the previous location had become too cramped. Several remains were transferred from the old cemetery to the new location. The new cemetery was then enlarged in 1962.

The parish cemetery has great historical value due to the presence of many points of interest including a Calvary, that is, a representation of Jesus on the cross, and a Station of the Cross, or a path of crosses leading up to it.

The burial site offers a beautiful view of the river and its wooded banks to the north. There are several ancient funerary monuments, some of which were transferred to the site from the first cemetery of the parish in 1907. The site also includes several wrought iron crosses, a type of funerary monument that is now considered rare.

With its rectilinear tombs and its rectangular sections separated by straight paths, the cemetery of Saint-Henri-de Mascouche is a reliable representation of Catholic burial places used historically in Quebec, and testifies to the funerary practices of the twentieth century.

The short history of the Stations of the Cross 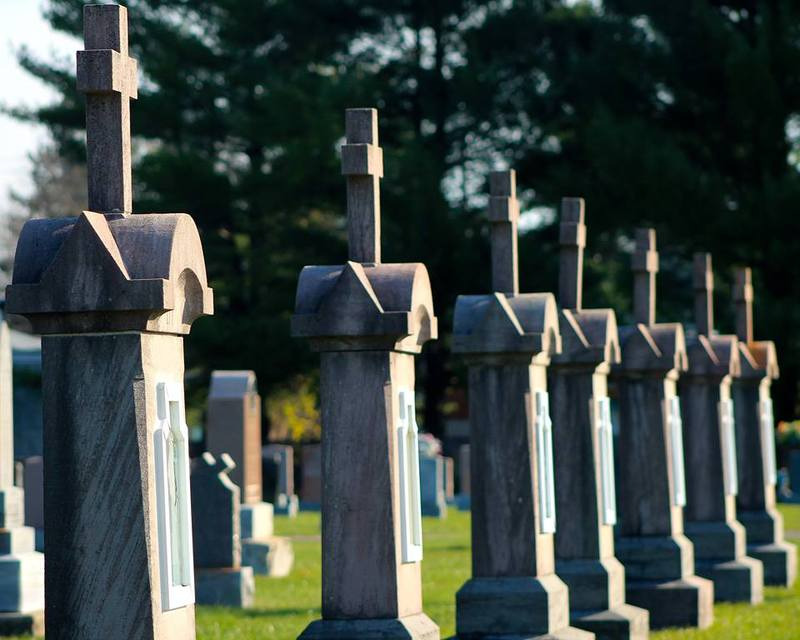 The Saint-Henri Cemetery in Mascouche has a Stations of of the Cross that leads to the Calvary. A name is engraved at the base of each station: it is the name of the generous Mascouchois who made financial contributions to erect these stations at the beginning of the century.

The tradition of the Stations of the Cross began in the 14th and 15th centuries, when the Franciscans invited those who came on pilgrimage to Jerusalem to participate in the passion of Jesus by going from Pilate’s Court to the Calvary.

Starting the 15th century, for those who could not go to Jerusalem, representations of the episodes of the passion of Christ were made so that one could meditate on the sufferings of Jesus without lengthy travel. The Franciscans spread this devotion, as they did for the nativity scene.

The death of Elvis Gratton 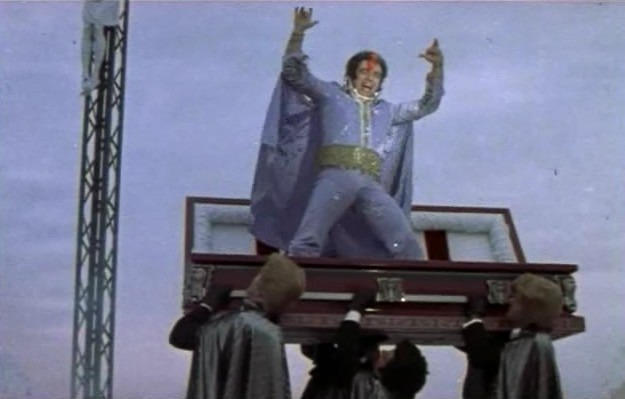 Did you know that the Saint-Henri Cemetery in Mascouche was used as a filming location for the film Elvis Gratton by director Pierre Falardeau?  The scene of Elvis' death, seen in this photo from the film, takes place in this very cemetery, not far from the Calvary. 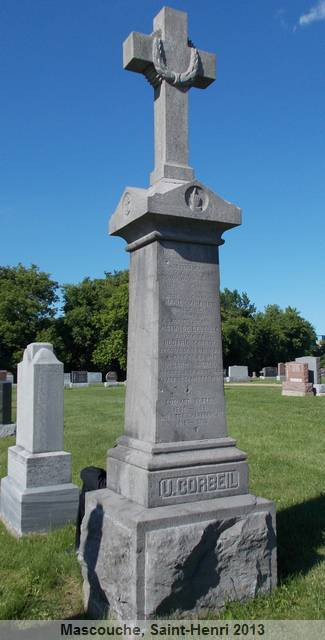 Uldaric Corbeil was born on November 15, 1852. As a child, he attended the model school in the village of Mascouche, before working on the farm with his parents.

In 1881, Uldaric Corbeil bought the manor of Mascouche and the adjacent Pangman Estate. He also added a fully functioning mechanical sawmill to the flour mill that already existed. He lived in the manor for 50 years until it was sold to Mrs. Colville in 1930.  Mr. Corbeil was elected several times as a municipal councilor and mayor of Mascouche and enjoyed the esteem of his fellow citizens. 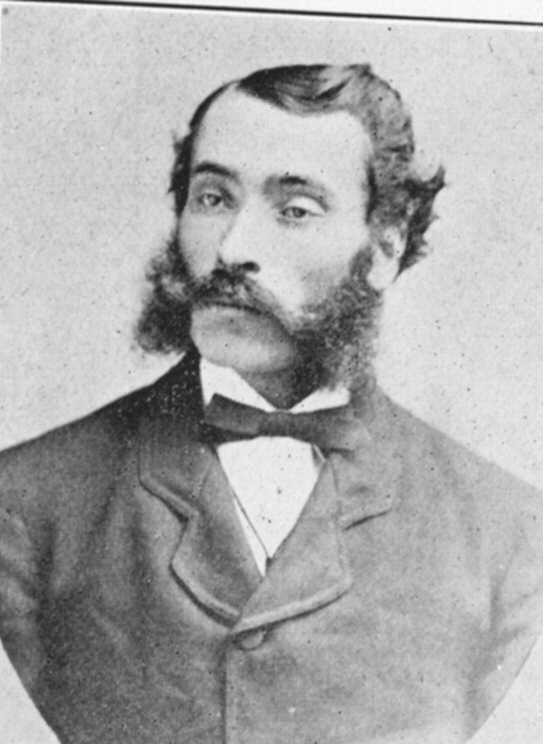 Uldaric Corbeil was born on November 15, 1852, from the marriage of Prosper Corbeil and Elizabeth Valiquette. 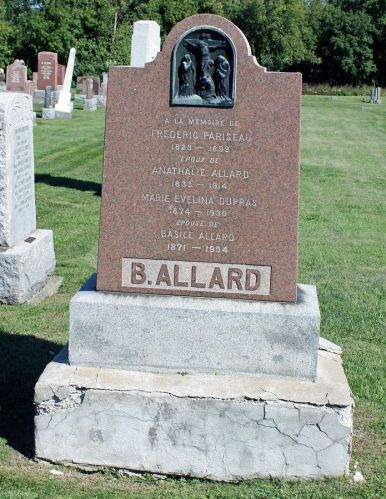 In 1908, Basile Allard opened the first bank in Mascouche, a branch of the Banque Provinciale de Terrebonne. Mr. Allard occupied many roles in the area throughout his lifetime such as collector of accounts for the Compagnie d'aqueduc de Mascouche, secretary-treasurer of the school board and the municipality of Saint-Henri de Mascouche, treasurer of the 1910 Festival Committee, and master cantor at the parish church for 22 years.

Following a daring armed robbery, the old banker was fired in September 1947, but rehired in December. Basile finally retired on January 10, 1949, after 40 years and 14 days of loyal service! As for the two criminals, they were sentenced to 23 and 36 months in prison!
Allard was the adopted son of Frédéric Dalpé dit Pariseau, a bourgeois and president of the Commission scolaire de Saint-Henri de Mascouche from 1881 to 1883. 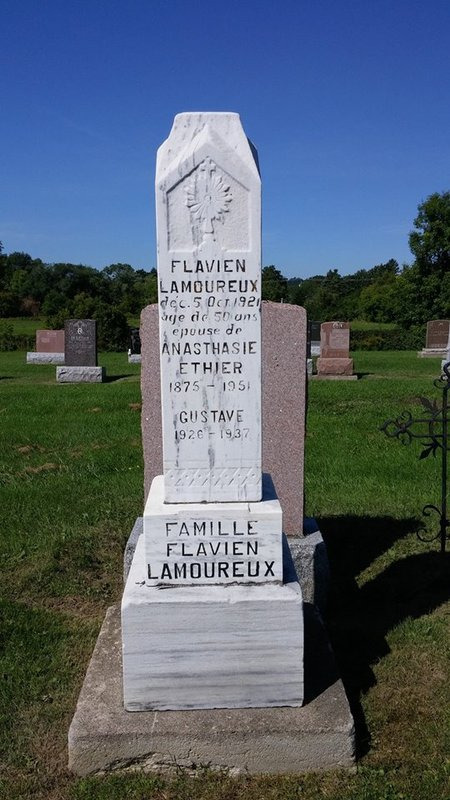 Flavien Lamoureux was one of the bakers of the village of Mascouche in the early 20th century.  A hard worker, he baked through the night and distributed bread during the day, often delivering as far as Epiphany, his native village. In life and at work, he could count on the help of Anasthasie Éthier, his wife since 1895, and her brother Ovila, the strongman of the Cabane Ronde, who was also a master baker like his brother-in-law Joseph Éthier. 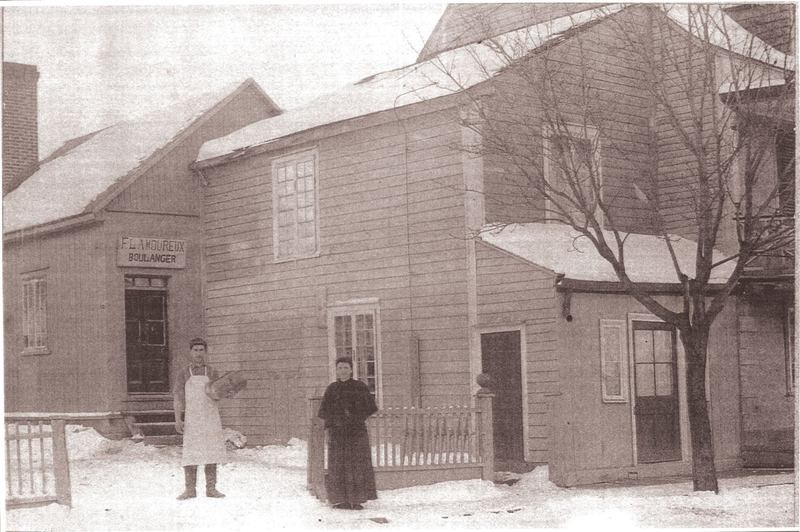 In this photo, we see Flavien Lamoureux and Anasthasie Éthier in front of their bakery in 1900.  It was located at the current location of the seniors' residence at 2985 Chemin Sainte-Marie. 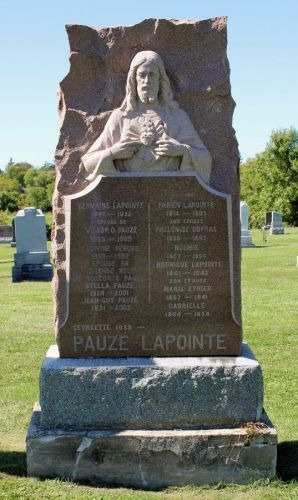 In 1911, Victor-Omer Pauzé, manager of the "Comptoir d'Escompte" in Mascouche, started the last privately chartered bank in Quebec, and perhaps even in Canada, under the authority of Seigneur Archambault. Two years later, he bought it. For nearly 60 years, he kept in a trunk on the first floor the life savings of the Mascouchois who entrusted the Pauzé father and son with this great responsibility. 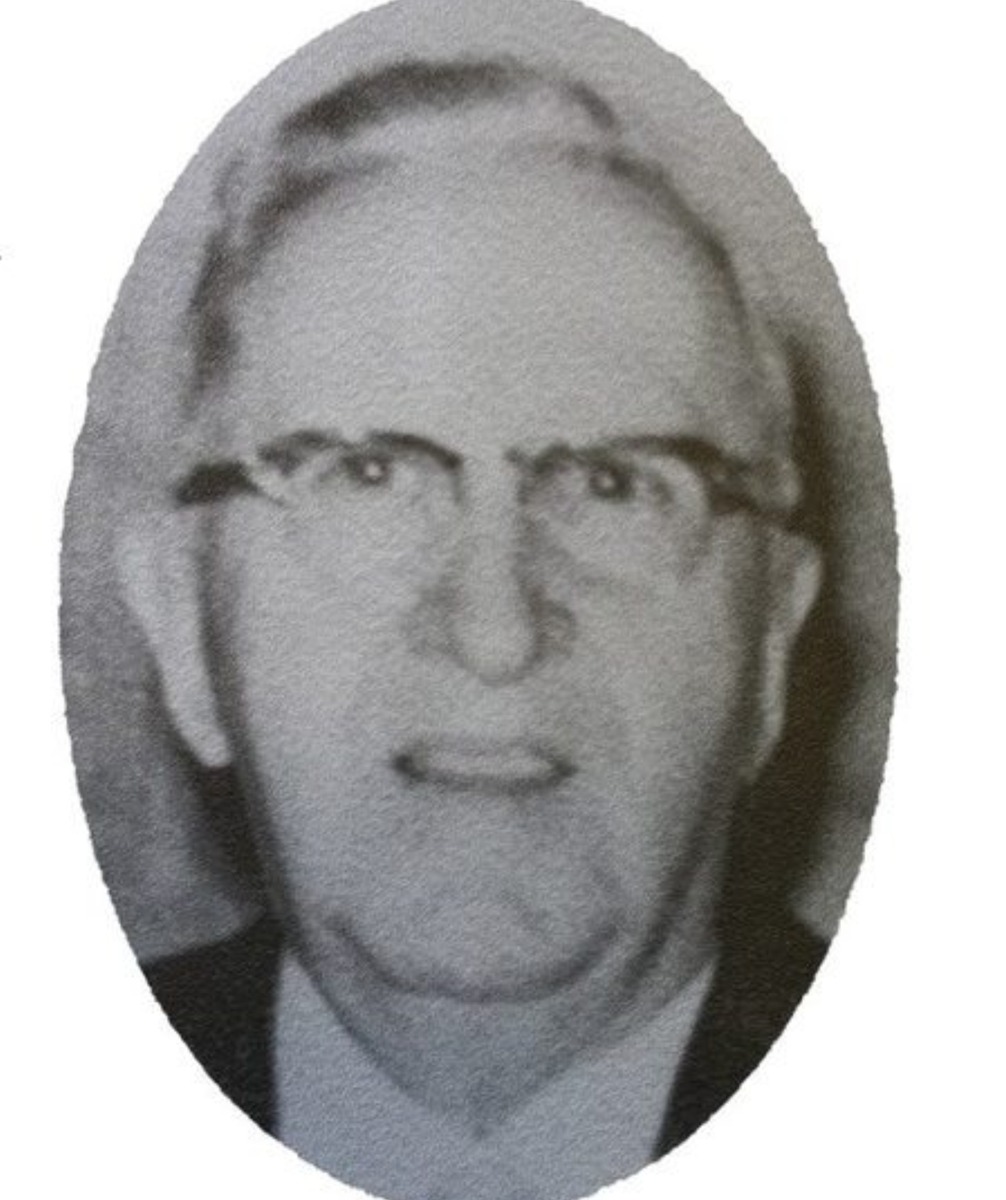 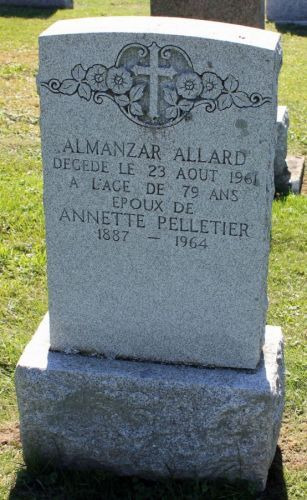 From the 1920s until the mid-1940s Almanzor Allard (alias Manzar) provided the taxi service between the train station and the village, first by "buggy" and then by car. Mr Allard also carried the mail from the village post office and delivered to the rural post office. This lead him to walk from house to house on the Chemin Saint-Pierre, from the Cabane Ronde to the Achigan River, the Grand Coteau, the Côte Saint-Philippe and finally back to the village by Chemin Saint-Henri. These dirt roads made it a trying journey during the winter, yet  he still managed to provide the taxi service and mail delivery with his "Lory," as he called it, which comprised of a sleigh on skates pulled by two horses instead of his car. 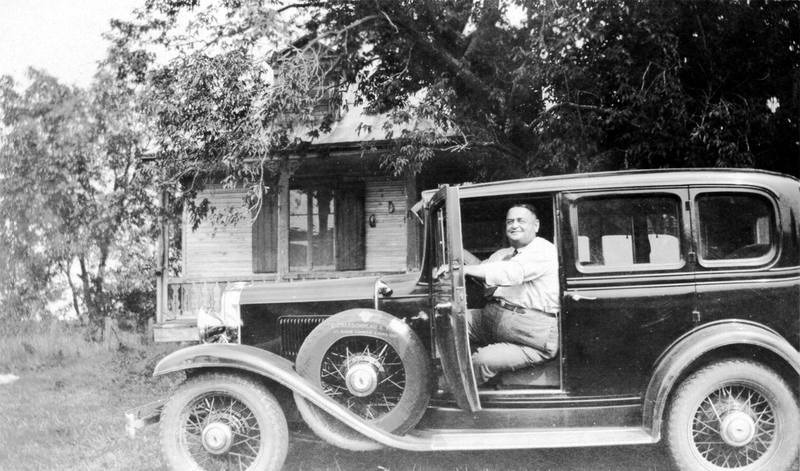 See below, Almanzor Allard in his taxi.
Mr. Allard is part of a historic mural that now sits on the wall of the Pizza Maximum restaurant on Dupras Street, in which he is depicted with his mail bag. 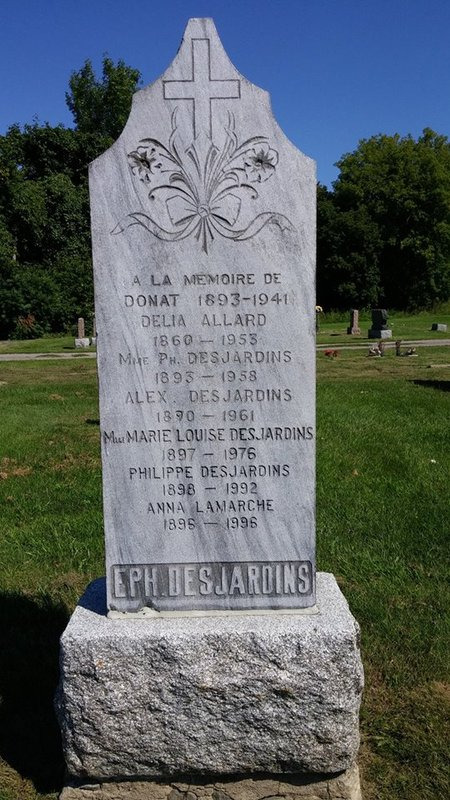 Do you know the song Marie-Louise by the Montreal-based band Zébulon?  The protagonist of the ballad is inspired by a resident of Mascouche, Marie-Louise Desjardins, born on January 17, 1897. She was the daughter of Éphrem Desjardins, a farmer, and Délia Allard, the youngest of a family of 8 children, only 6 of whom survived. She remained unmarried and enjoyed living on the family farm on Saint-Jean Street.

As the song goes, Marie-Louise was very eccentric for her time! You could find her, in any season, running errands in the village, all dressed in black, and adorned in multiple layers of dresses, skirts, and blouses. She wore colourful, hand-painted shoes, a small hat and matching saddlebag, and hanging around her neck, an impressive fox-headed fur wrap.  Most notably, she was also known for her love of cats; some go so far as to say that she accommodated up to 80 in her house!
She died on October 5, 1976. 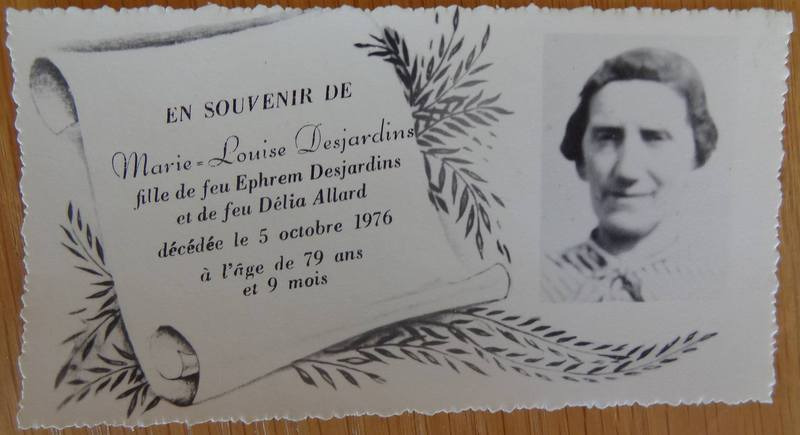