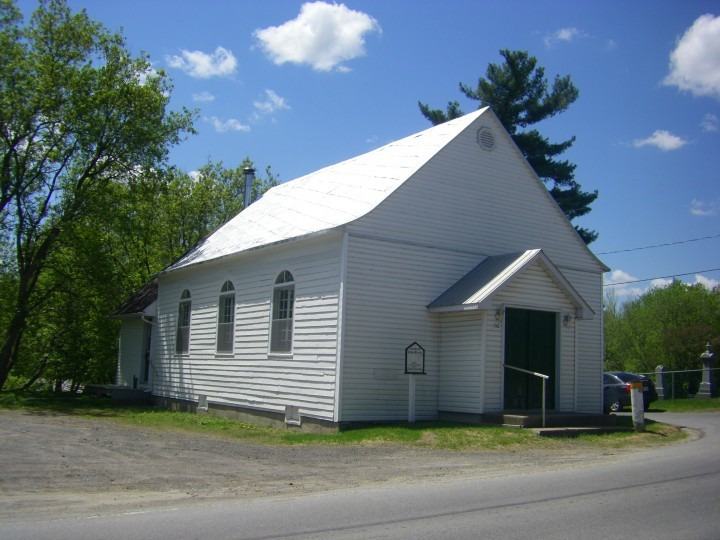 This Protestant church, built in 1856, was originally located near the Chemin des Anglais and was nicknamed “The Methodist Church of Mascouche-Rapids".  The building is the work of the seven brothers of the Alexander family: Lancelot, Francis, Richard, William, James, Joseph, and George. One of their descendants, John Alexander, became mayor of the parish's municipal corporation from 1915 to 1917. Originally, it was built two miles from its current location but was moved using sleighs and horses to 1162 Chemin Sainte-Marie.

It was not until 1925 that the church became known as "Mascouche United," which brought together Presbyterian, Congregational, and Methodist churches. The history of the church, like that of  many sites in the Mascouche area, reveals some interesting facts. In the beginning, there was a different minister almost every year. The members of the parish took turns going to the Mascouche or Terrebonne train station to pick up a "student minister" every Saturday evening. It was an eight-mile round trip by buggy or sleigh to ensure the minister's presence for the Sunday morning ceremony. This "student minister" was boarded by the family who received him before he returned to Montreal on Sunday evening, by train.

For several years, the parish shared its "student minister" with the United Church in New Glasgow. During the summer, the student spent one week in one parish and the next in the other. He delivered a Sunday morning service before travelling to the new location, where he would deliver an evening at his new hosts' house. Many of today's parishioners still remember the community activities that marked this neighborhood, like the baseball games that pitted the young people of the two parishes against one another, and sometimes involved two or three ministers. The parishioners of Mascouche United are to this day grateful to these men and women who have encouraged them to keep the doors of the church open to all who wish to enter this place of sanctuary.

The existence of this parish is still marked by tradition and is a testament to the devotion and generosity of past peoples. The current organizer, Muriel Alexander, had three aunts (Annie, Hattie, and Lillie Alexander,) as well as several cousins who played the organ at different times in the history of this parish. Muriel has been playing this same instrument in the church for more than thirty years.
The small white church on the hill, as it is called within the parish, remains a place where people gather as much to immerse themselves in the memories of the past as to pay tribute to the Day of the Lord. The name Alexander is omnipresent because the many members of this family have carried on the legacy of generous gestures towards the church and the parish community. 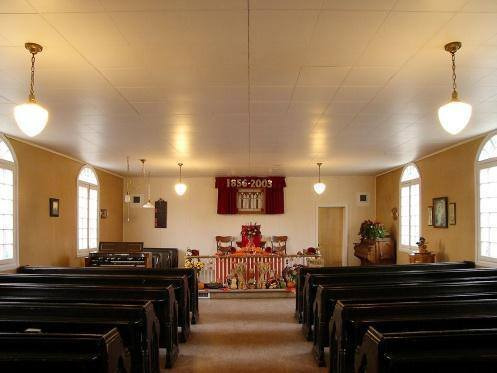 The plan of the church is rectangular with a nave with a vessel and a flat ceiling. The roof has two slopes with a slightly curved base, covered with Canadian style sheet metal. The entrance is located via an interrupted base pediment drum. The wooden windows are arched.

Mascouchois say that in their youth, the Mascouche United Church was referred to as La Mitaine, which translates as the Mitten - But where does this strange name come? At the time, Protestants gathered in this place to participate in meetings, the equivalent of Catholic masses. The term la Mitaine therefore comes from the distortion of the expression meeting house that French speakers used to designate these places of worship. This variation of the word meeting is common in all Quebec villages that house a Protestant chapel; even today, the elders will be able to tell you where the mitt of the village!. 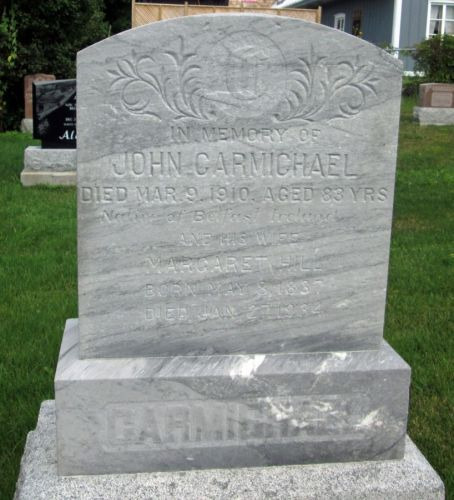 John Carmichael and his wife Margaret Hill originated from Belfast, Ireland. John Carmichael arrived in Mascouche-Rapids around 1885 and opened a general store in the heart of the hamlet, in front of the cemetery. He will keep it until the end of the 1890s.

Carmichael and Hill are suitable representations of the kind of Irish, English, and Scottish immigrants who came to settle in Mascouche in the 19th century. It is no coincidence that, at the beginning of the 20th century, the Chemin des Anglais was called the Montée des Irlandais, since other families from Ireland had resided there since 1820. 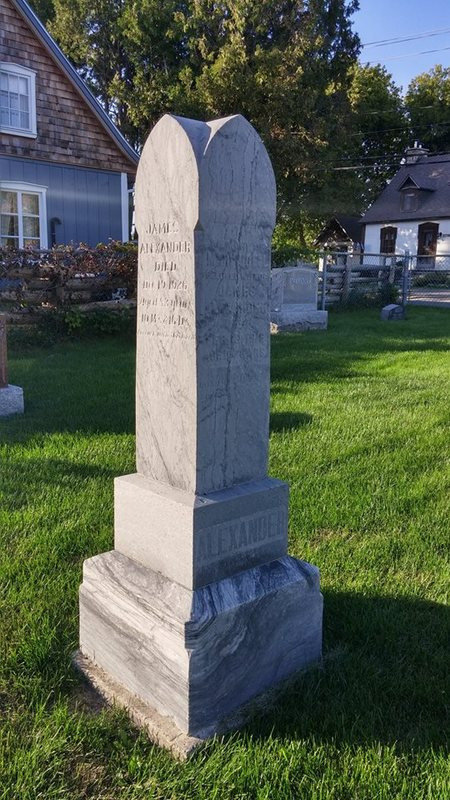 James Alexander (1843–1926), the seventh son of John Alexander and Rebecca Robinson, married Mary Ann Bell in 1871. The family settled on a farm that was gifted to him by his father.  On this land, alongside his eldest son John, James built the first wooden bridge around 1890.  Herbert (1887-1968), the youngest of his five children, inherited the farm in 1913 and had four children with his wife Lillie Dixon Job: Dorothy, Ivan, Alfred, and Lorna.

Alfred, born in 1919, represents the fifth generation of this family in the region since 1824!  In 1943, he married Muriel Alexander and raised three children: Alfred Jr, Joyce, and Marilyn.  Alfred inherited the farm in 1946 and raised a herd of Ayrshire cows for fifteen years.  In 1953, he obtained one of the first Volkswagen franchises in Canada, which, five years later,was the first car dealership located on the montée Gascon, at the intersection of Martin Road, still on the family land.  Fred and Joyce joined their father's business in 1962 and 1963.

In 1812, the renowned New England Journal of Medicine (NEJM) reported on some of the causes of death that afflicted the Anglophones of the region.

Some notable curiosities listed include:  a lightning strike, two deaths from the consequences of "stomach cramps," and two people who perished for drinking cold water! Though it reflected the professional opinions of the time, the NEJM  reveals the sorts of outdated beliefs that were held by the medical community. In 1812, an article was published by a competitor of the NEJM, the Edinburgh Medical and Surgical Journal, in which the devastating effects of the wind of a cannonball are described:

Clothes whose buttons and shoulder pads are torn off, which produces extensive lividity on the part of the body near which the ball is passed, sudden or gradual blindness, fractured bones into a thousand pieces without even the skin being torn.

In its first year of existence, the NEJM investigated the phenomenon of spontaneous combustion in factories, which consisted essentially of dust explosions or fires caused by flammable products. The article nevertheless ends by citing the example of spontaneous combustion in brandy drinkers and especially in women. Worry not for logic’s sake however, as scientific caution is brandished in the following sentence where the journal urges its readers to wait for better evidence than we have seen so far, before giving credence to these reports, even if they come from learned societies.