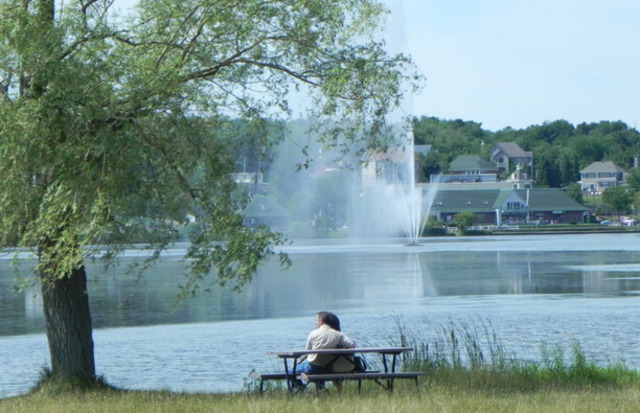 Granby is the second largest city in terms of population in Eastern Townships.

The first pioneer to settle here, where the hamlet of Granby would layer be established, was John Horner around 1810. The village of Granby first had a mostly English-speaking and Protestant citizenry, and its history took off in 1824 when Richard Frost acquired lot 8 of the seventh range, and in 1825 he traced the first plans of the village of Granby. In 1835, the first Irish and the French Canadians arrived in town. From then, the town's dual ethnic reality took shape with a Catholic and French-speaking village and pockets of Protestants and English-speakers.

From Wednesdays to Sundays in the summer starting at 1:30 pm, a guide accompanies visitors to give a commentary about the "Le Flâneur Curieux" (reservations required, minimum 10 people). An audio-guide also enables you to follow the tour on your own at your own pace.


Mountain Street Sector (1 800 567-7273): From the 1870s to 1890s, Granby's English-speaking upper class brought the eclectic nature of the Victorian era to the town's architectural landscape. Old English-speaking families such as the Miers and Vitties lived in this district.

In the spring of 1869, it was weakened by the river's runoff torrent and gave way without warning. Five women, four children, and two men (including Granby's first mayor, Patrick Hackett) were thrown into the icy waters, and all perished. The bridge was completely restored in 2008 and named the Patrick Hackett Bridge in honor of the city's first mayor.


Dufferin Street Sector: Victoria Park and the Selbach Fountain (1 800 567-7273): Inaugurated in 1889, Victoria was Granby's first park. Its name in honor of the former queen of England recalls how the upper village was the stronghold of the English-speaking community at the time.

Senator Selback was intrigued by the number of  fountains in Granby's various parks, and sent plans for another to the city, which adapted the model seen here today. The fountain was installed in 1982, with part of the costs covered by Mr. Selbach.


Elgin Sector (1 800 567-7273): This one of the most picturesque areas of Granby. It features different types of architecture that show the wealth of the late 19th century's grand merchants.

Among the buildings is the Château Brownie, named after the mischievous imps of a Scottish legend and made famous by writer Palmer Cox, whose residence dominates the heights of Victoria Park and Élisabeth Street with its European-castle-inspired tower. Also, next to the park at 85 Elgin is the former residence of Horace Boivin, former mayor of Granby.The building has been magnificently renovated.


Lac Boivin Nature Interpretation Centre (700, rue Drummond, Granby, 450 776-7182): This conservation area allows you to discover a marsh which is considered one of the best bird-watching sites in Quebec. Includes observation towers, walking paths, exhibits and a boutique.


Yamaska National Park (1780, boul. David-Bouchard, Roxton Pond, 450 539-4764 or 1 877 539-4764, www.sepaq.com/pq/yam/index.dot?language_id=1): Parc national de la Yamaska will charm you with its highly varied vegetation. A witness to the history of the park's territory, Choinière reservoir is bordered by forests and meadows that provide a refuge for several animal species.

When the weather is nice, the lake comes to life as water sports enthusiasts arrive with their kayaks, pedal boats, windsurfers and canoes. Winter activity enthusiasts will enjoy the gentle, rolling landscape of the Appalachians that can be seen all around the Parc national de la Yamaska.