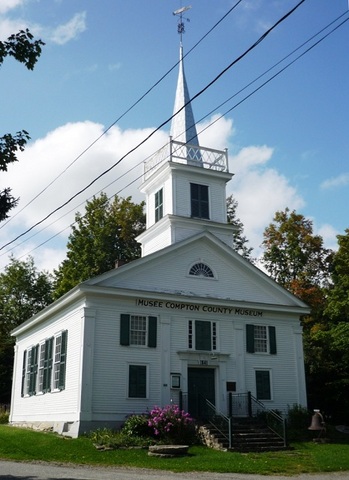 Scenic roads criss-cross its 567 square kilometres, taking travelers through rural communities to discover many interesting sites. Among them is Cookshire, founded by Loyalists, on a route long traveled by the Abenaki who had maintained seasonal camps in the area.

Cookshire was named after Captain John Cook, who, in 1795, was the first settler to acquire lands. Today, the sectors of agriculture and forestry predominate. Several buildings have been designated historic monuments. Among them is Cookshire which was founded by the Loyalists, though the area was long traveled by the Abenakis who had seasonal camps in the region.

The Parc des Braves (85, rue du Parc, Cookshire-Eaton): The Parc des Braves is an ideal location to discover local heritage and to learn about it. It is surrounded by historic buildings, including the English school and St. Peter’s Church, the only church in the Haut Saint-François built entirely of stone. Explore some of the secondary roads where a number of early vernacular and Victorian-era homes can be seen.