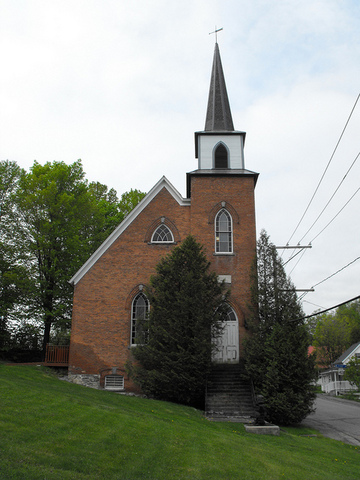 Housed in a Presbyterian church built in 1889, displays at the Centre focus on the history of slate production (roofs, slate objects, and so on). Activities: Information tour on slate roofing. Documentation available at the Centre d’interprétation de l’ardoise.

Richmond was brought into cultivation at the end of the 1790s by pioneers from New England, Montreal and the Richelieu Valley. It is one of the oldest municipalities in the region.

The town’s name honours the Governor General of the colony at the time of its creation, Charles Lennox, who was the fourth Duke of Richmond. In the mid-19th century, Richmond was the home of St. Francis Academy, which was founded by Alexander Lucius Twilight, who was the first African-American to obtain a university degree, and who also taught there. Richmond is also known for its local slate and brick production.