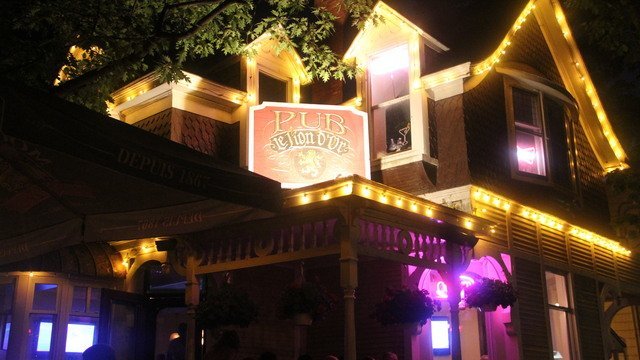 At 6, rue College of the Lennox borough - Elder of the elders, the Golden Lion microbrewery was born in Lennoxville in 1984, long before the other microbreweries in Quebec. It has been delighting students and teachers of Bishop's University ever since, only a few steps away...

Know that the nectar brewed there is not exclusive to Bishop's students! And whatever your brewing taste is, you will find the right glass for your hand.

Interesting fact, one of their popular beers was invented, among many things, by complete accident. While Stan Groves Jr. was on vacation, his brother responsible to replace him mistook kilos for litres as he was trying to brew the Lion's Pride (British-inspired pale ale beer), which gave a much more hopped beer, now called Bishop's Best Bitter.

Suggested beer:
If you are here during the summer season, take your place on the terrace and order a Blueberry Watermelon Wheat!

Since its opening, in 1998, SherBroue has contributed to form over 300 students to brew beer. Some of these students also pursued a career in the brewing field.