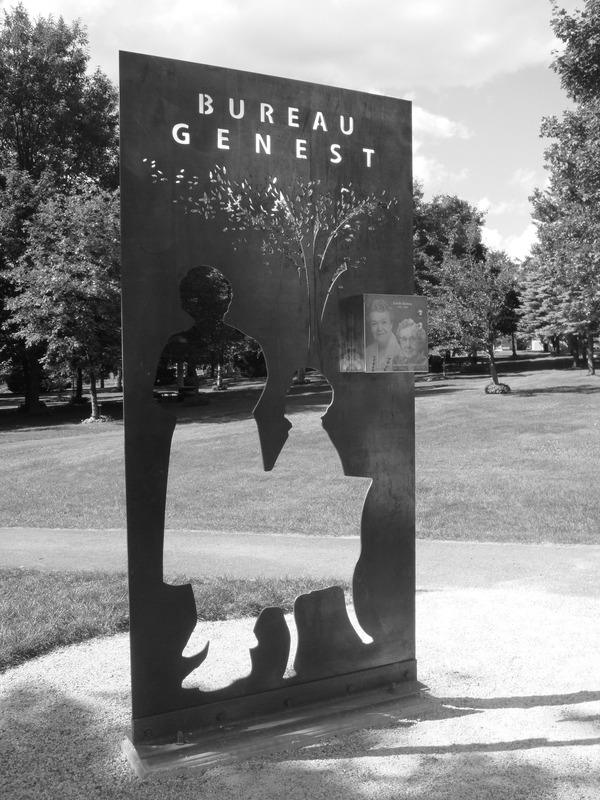 Although most of the women of their generation led lives far removed from public view, it was not so for these two women, Mme Genest and Mme Bureau.
They were both deeply involved in the community, the economic development of Comption and the region around about. 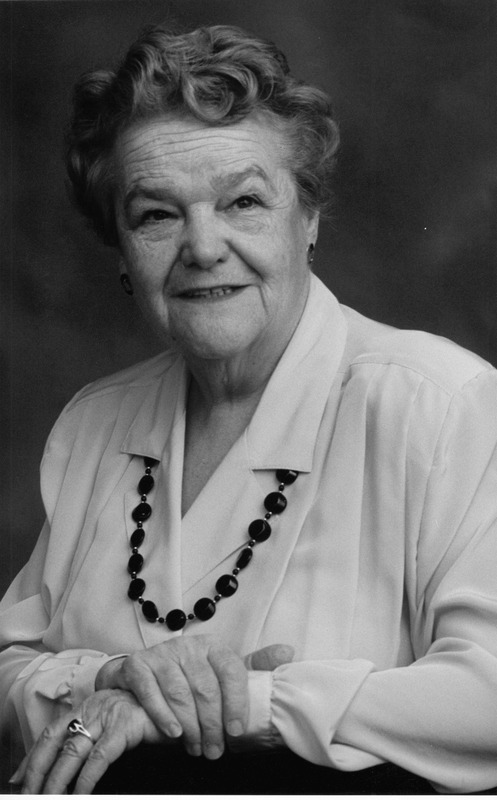 Estelle Bureau has left us her mark - and her infectious laugh – as community nurse, school-board counselor, member of the board of directors of many organizations in Compton including the Credit Union and the Agricultural Cooperative. 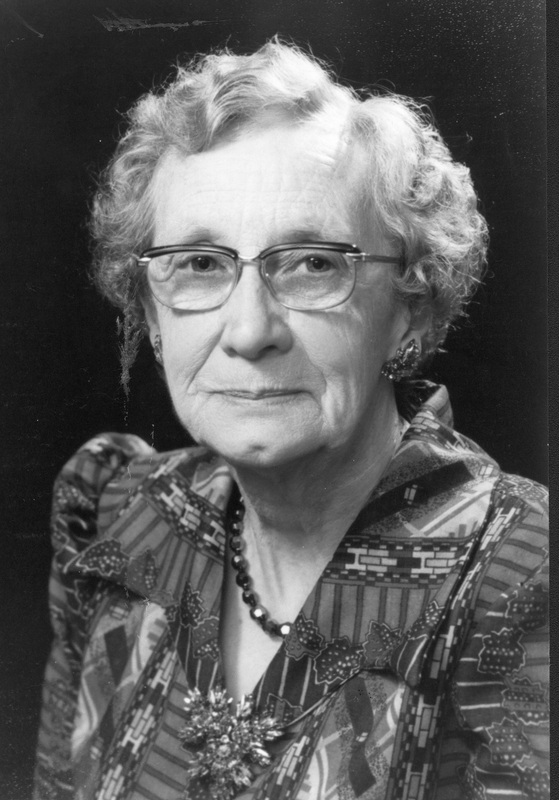 Mme Genest joined with her husband in the founding of the Compton Credit Union, of which she was the manager for 27 years. She was also the organist at the St.Thomas Aquinas church for some 30 years. 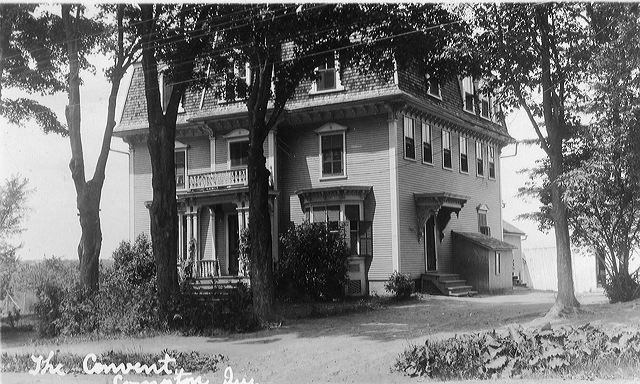 The convent in Compton, on the Hatley Road, started off as a centre of education run by the Sisters of the Presentation of Mary. When the sisters departed, the building became the primary school. Today it serves as a day-care centre, library and community centre. It was here that Estelle Bureau studied as a child. 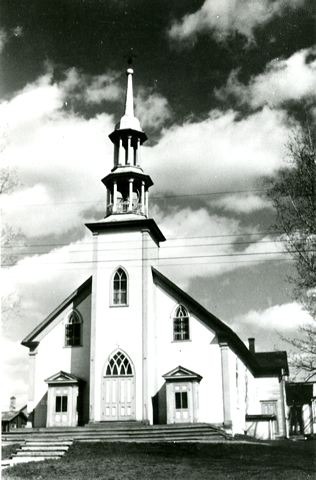 The land for the first Catholic church was purchased in 1853. The construction of the church was completed in 1855. The church was destroyed in the mid-1950s. 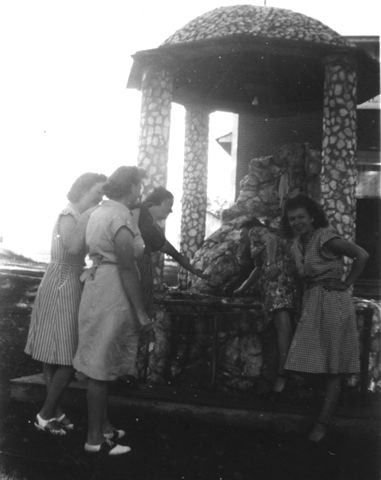 All that remains of the church today is the grotto.

Inside the First Catholic Church 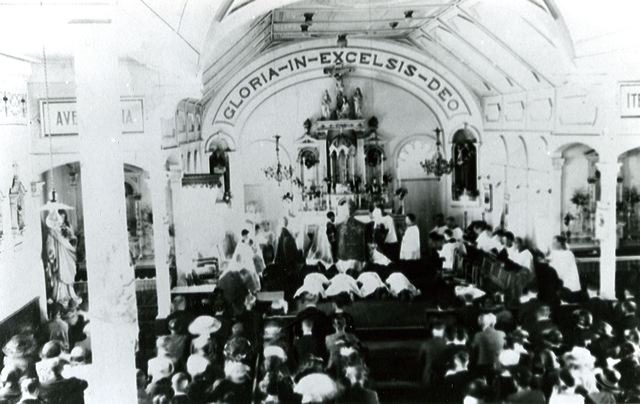 A view of the interior of the former church. Mrs Genest was the organist and director of the choir for many years. 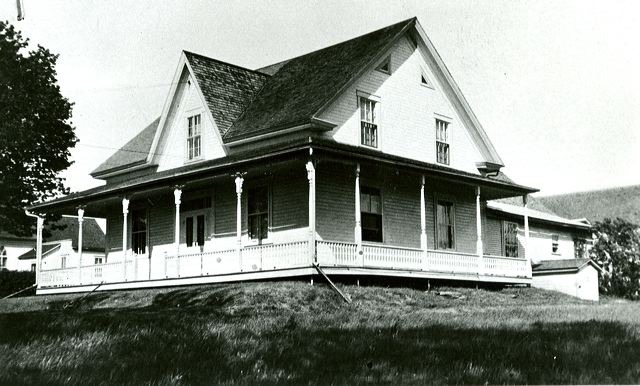 The rectory, at 50 Hatley Road, is now a private residence. Its character as a heritage building has been well preserved. 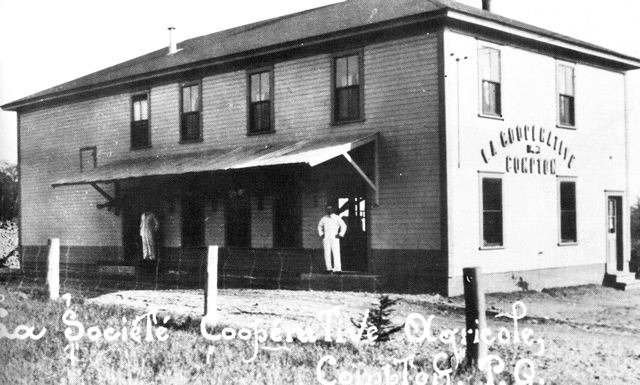 The construction of the dairy building was started in 1934. Philias Bureau, Estelle's father, was one of its main founders. Mr. Allyre Genest was its second secretary. She was one of the prime movers in the establishment of the agricultural co-operative. 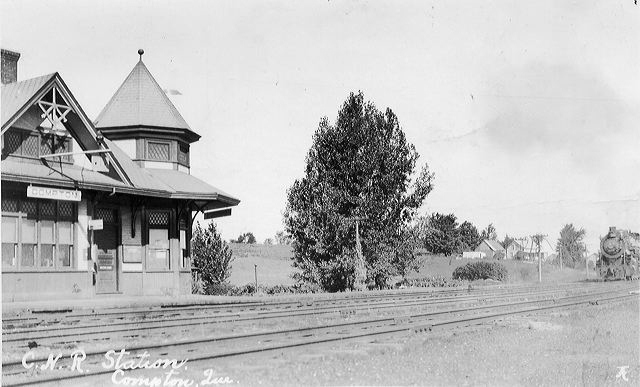 A view of the old Compton railway station beside its track on Station Road. Estelle would go there each morning to pick up the mail which she would then deliver on the family route by horse and buggy. In 1970, the station was sold privately and was moved to a site in Stanstead East where it can still be seen. 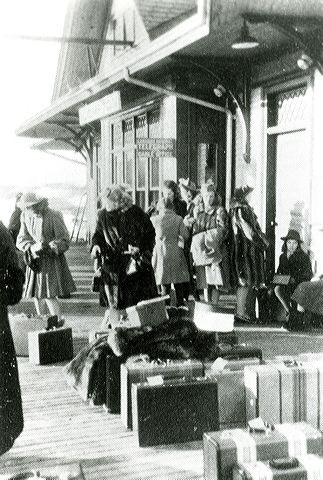 One of the waiting-rooms was reserved especially for the young ladies who were students at the private King's Hall School, Compton. 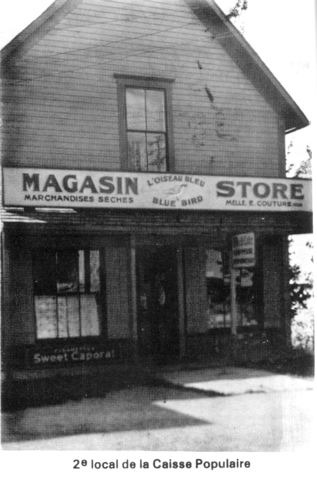 The Credit Union (caisse populaire) started life in the Genest home on chemin Cochrane. In 1952, it was moved to a house close by the Joseph-Edward Savary store on Main Street (see photo). Estelle Bureau was chairperson of the Board of Directors for many years. In the 1970's, the Credit Union was moved to its present location. 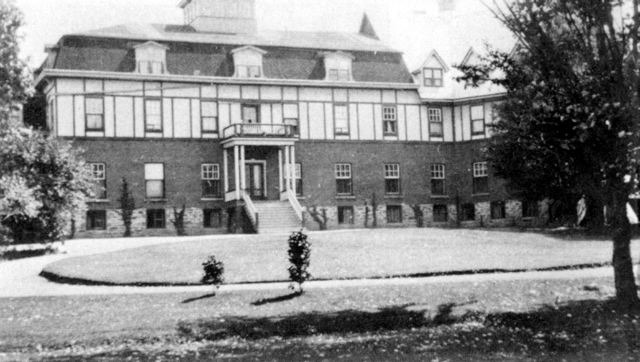 In 1874, at 40 chemin Cochrane, Matthew H. Cochrane and a number of interested citizens established the Compton Ladies' College, the purpose of which was to provide a boarding school for upper-class young English-speaking ladies. It took on the name of King's Hall in 1902. In 1981 it became an hotel. At present it stands unoccupied.

Estelle Bureau's family came to Compton from Beauceville, where she was born in 1922. Estelle was a pupil in Compton-Station and subsequently in Compton Village itself. In 1925, at the age of 25, she graduated as a nurse and went to work at the Hôtel Dieu Hospital in Sherbrooke.

Estelle Bureau's professional life was marked by a proliferation of occupations and commitments. The post-office, one of four in the region at the time, was run by her family from their home in Compton Station, about a mile from the village. At 7 o'clock every morning, off would go Estelle carrying her empty courier's sack to meet the train and pick up the day's full one. Then the Bureau family would hitch up the horse and buggy for their share in the day's deliveries, over a route of some 16 miles.

Elected by acclamation to seat #5 in 1970, Estelle sat as a counselor for the Municipality of Compton village until 1978, when she decided not to run again. She was chairperson of the local credit union for many years.

Despite her heavy commitments, Estelle's recognition came first and foremost in her role as nurse. Nurse Bureau worked for the Cookshire Health Unit, where nominally she specialized in vaccinations. However, her job didn't just stop there. In effect, she was the village doctor. Anyone who felt poorly would not hesitate to call Nurse Bureau for help. She was always available for mid-wifely duties and home visits.

Nurse Bureau was always on the spot to fight the epidemics of the day, such as diphtheria and measles. From her office in the school she ran numerous vaccination campaigns throughout this wide-spread region - from Cookshire to St. Malo, St Venant and even as far as St. Isadore.

Marie-Ange Vaillancourt, daughter of Isiah Vaillancourt and Josephine Poulin was born in St. Bernard de Dorchester on 5th January 1901. Marie-Ange was the eldest of 14 children.

While she was still very young, she studied music under the sisters at Sainte Marie de Beauce. Later on, she was courted by a young neighbour from across the road, Allyre Genest, son of Dr. Genest of St. Bernard de Dorchester. After Allyre completed his course in agronomy, they married. She was still only just twenty years old at the time.

M. Genest worked for the government as an agronomist, traveling throughout the province. He fell in love with the Eastern Townships and bought a small farm for $5,000 in Compton village. This farm was next door to the King's Hall, where a building now stands at #10 chemin Cochrane.

As the couple were the most educated people in the area, the village priest, Rev. Brouillette approached them with the proposal to establish an agricultural cooperative and credit union. Mme Genest took charge of the credit union in her own house for the next 27 years, meanwhile carrying out her housewifely duties.

The installation of the credit union was quite rudimentary. It was not terribly secure; the safe itself being in the house. There were no regular opening hours. People often showed up late at night or early in the morning.

The Genest couple, besides having four children of their own, adopted two other children. One of them was Jimmy McDonald, originally from Nova Scotia who had lost his parents through a drowning accident. The other, Denise, was not legally adopted, but grew up in the Genest family.

Despite all these activities that filled her life, Marie-Ange retained her passion for music. She was church organist for over 30 years and led the Compton Catholic church choir. She also music teacher to many children. Up until her death at the age of 96, at the Foyer St. Joseph de Sherbrooke, Marie-Ange continued to play her music.