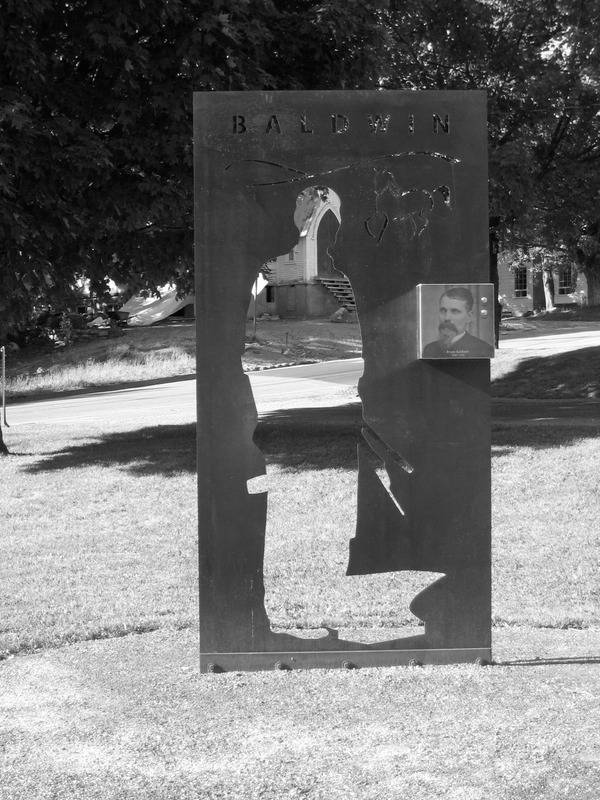 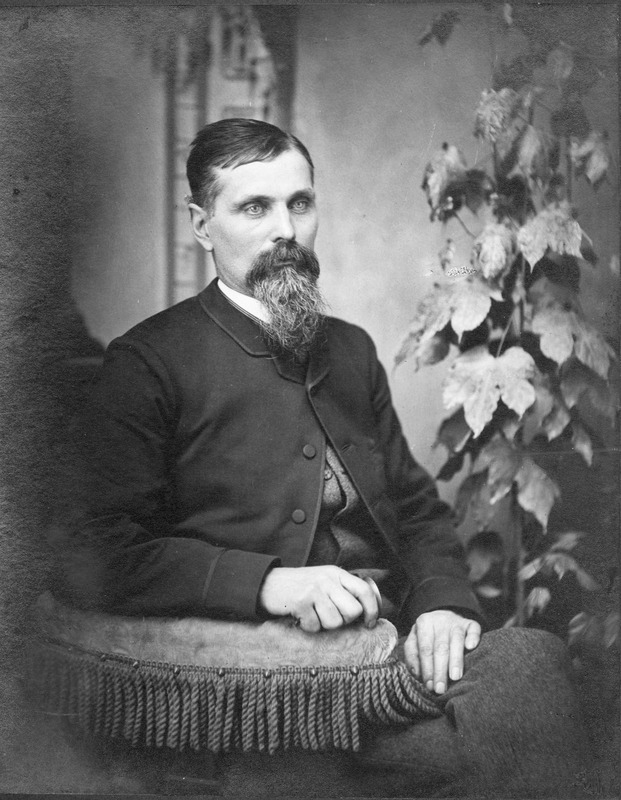 Born in Dixville, at the time known as Drew's Mills, he was a member of a large pioneer family in the Coaticook region. He was a major player in the establishment of this municipality. 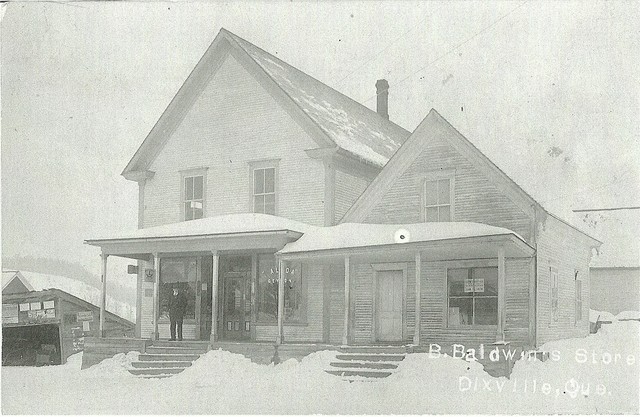 Bruce Baldwin's store was situated on chemin Parker. He bought it from J. Mayhew in 1887. When he took on his son-in-law, T.J. Grady, as partner, the store was renamed Baldwin and Grady's Store. As well as selling clothing and groceries, the store comprised a smithy, a public telephone booth, post office, drugstore and a service counter for the Eastern Townships Bank. 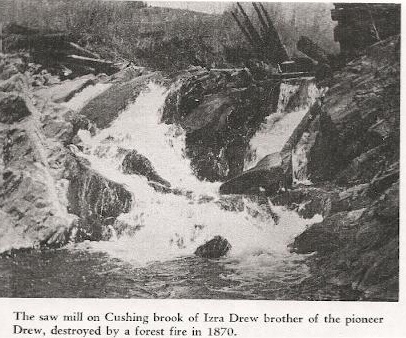 Drew's Mills is named in honour of the Drew family who were amongst the first settlers. Around the year 1830, Mr. Drew constructed a dam on the river. His brother, Izra, built a sawmill there, which, however, was destroyed in 1870 in a forest fire and rebuilt thereafter. 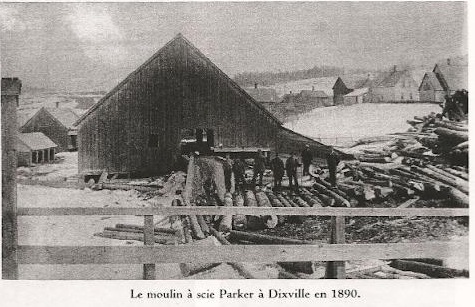 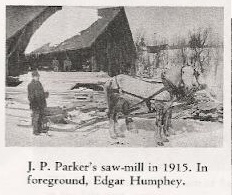 In 1906, Joshua B. Parker bought out the others investors' shares for about $12,000 and became the sole proprietor of the dam and the sawmill. Over a goodly number of years, locals referred to it as Parker's Mill. 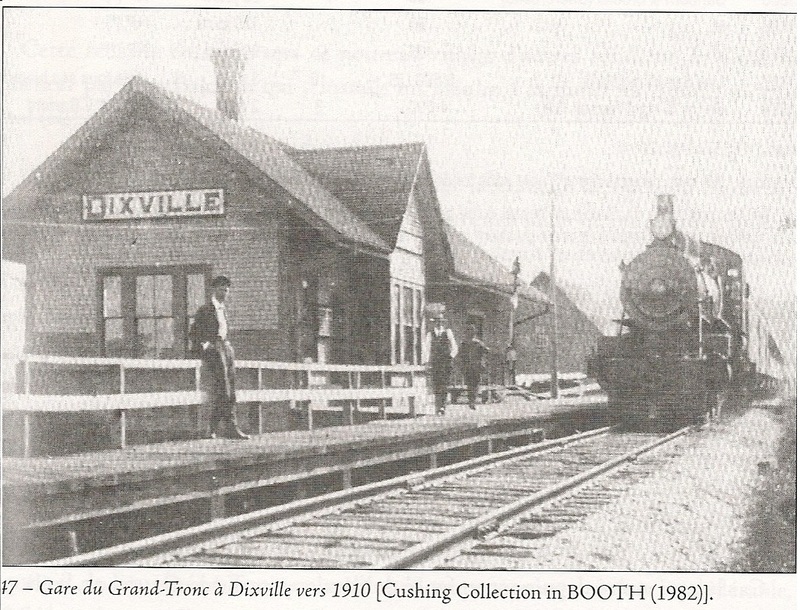 In 1852, the railway company in charge of construction of the Grand Trunk and St. Lawrence & Atlantic Railways established the Drew's Mills Section Headquarters here for the construction of a line to Portland Me.

The Train in Dixville 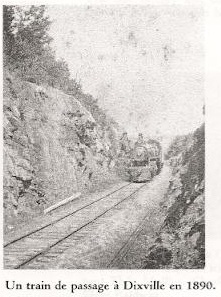 The arrival of the railway was an important factor in the development of Dixville. Local products could be distributed more widely and grain could be brought in. It was decisive in the establishment by Richard Baldwin of the first general store in town. Richard was the cousin once removed of Bruce. 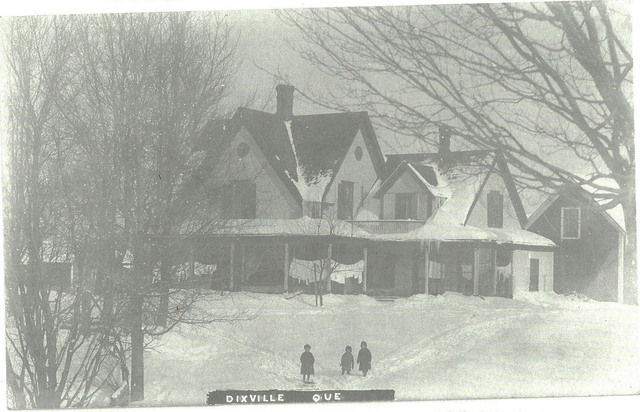 In 1874, Bruce Baldwin and family settled in the village of Dixville. Their house was built at 315 chemin Parker.

Bruce Robert Baldwin, born on May 24, 1842 in Barford, south of Dixville, was the great-grandson of Levi Baldwin. He was also brother to Ira Baldwin (1807-1885) and Susan Glover. During the 1850s he learned the trade of blacksmith. On December 29,1863 he married Arminella Humphrey and they had a daughter, Helen. In 1874 they moved to the village of Dixville, where they built their house at 315 chemin Parker. Bruce Baldwin plied his trade as village blacksmith for many years.

In 1887, Bruce Baldwin purchased J. Mayhew's general store, situated on chemin Parker, across the road where the municipal office is now. When he purchased the store, he renamed it Baldwin & Grady's. He managed the store until his retirement in 1923. The store carried hardware, ready-to-wear clothing, shoes and boots, fabrics and school supplies - besides which it comprised a smithy, a community phone booth, a post office and a service counter for the Eastern Townships Bank.

Besides managing this village general store, Mr. Baldwin held a number of local official posts. He was postmaster from January 1st, 1888 until December 13, 1916. He served four terms as mayor of Dixville and altogether served 20 years on the Dixville municipal council. In 1907, he was elected Warden of Stanstead County. As such he would have been head of the administration for all the municipalities in Stanstead County

As for his religious beliefs, one could say that he was very open and eclectic. At birth he was a Baptist. Later, he joined the Methodist Church. Finally he became a parishioner of St Cuthbert's Anglican Church. He died on January 2nd, 1925.

Source: Susan Beaton (2012). The authoress is a descendant of Bruce Robert Baldwin. She is at present working on the editing and publishing of the first comprehensive history of Dixville.