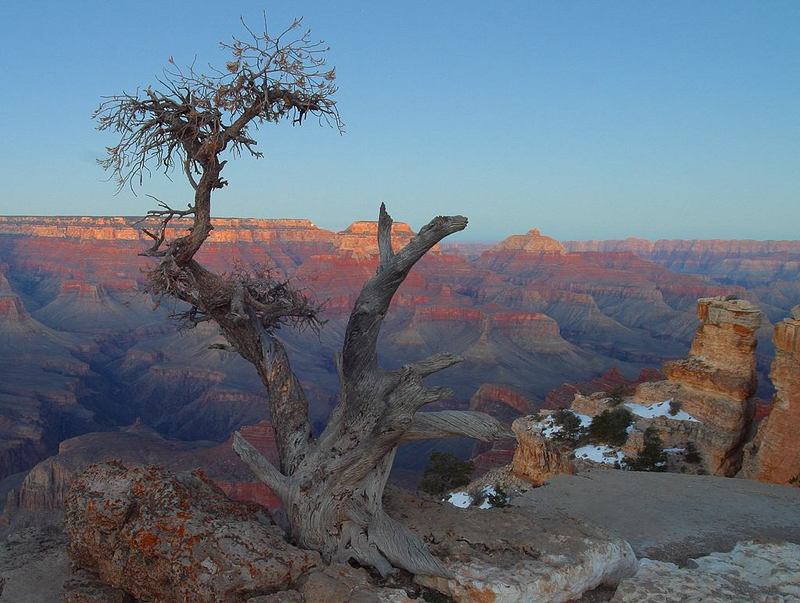 Note: This viewpoint isn't accessible with a private vehicule. You can reach it following the Kaibab Rim Route shuttle bus, starting at the visitors center, by foot or by bicycle. At this quiet place, the view is beautiful on the eastern side of the Grand Canyon and the central portion, including Wotan's Throne and Vishnu Temple. The sunrise and the sunset are worth it. This is the starting point of the South Kaibab Trail, descending to Colorado river and Phantom Ranch. Spectacular views await the hiker who descends from Yaki Point (2213m of elevation). Toilets can be found there.

In 1925, the National Park Service wanted a fast road to get to the canyon since Ralph Canyon wouldn't give up his control over Bright Angel Trail. The Service decided to build its own trail to Yaki Point, since it was close to the village and allowed a direct trail to the Canyon. Known today under the name of South Kaibab Trail, it was once called Yaki Trail because it started near Yaki Point.

Several groups of the Civilian Conservation Corps worked in the Grand Canyon during the Great Depression. Even if their headquarters were in Ft. Huachuca in Arizona, for three years this unit was billeted at Yaki Point all year long. This unit was doing a journey each day, carrying coal, mail and food to the CCC workers (Civilian Conservation Corps) around the Canyon. Despite the snow, the landslides and other obstacles, the unity claims it never missed a delivery.

The East Rim Drive, completed in 1931, connected the Grand Canyon to Desert View at the east entrance of the park. One of the branch pipes on the way dropped off the visitors at Yaki Point. Today, in order to reduce the pollution and the crowds, the connecting route was closed to private vehicles.