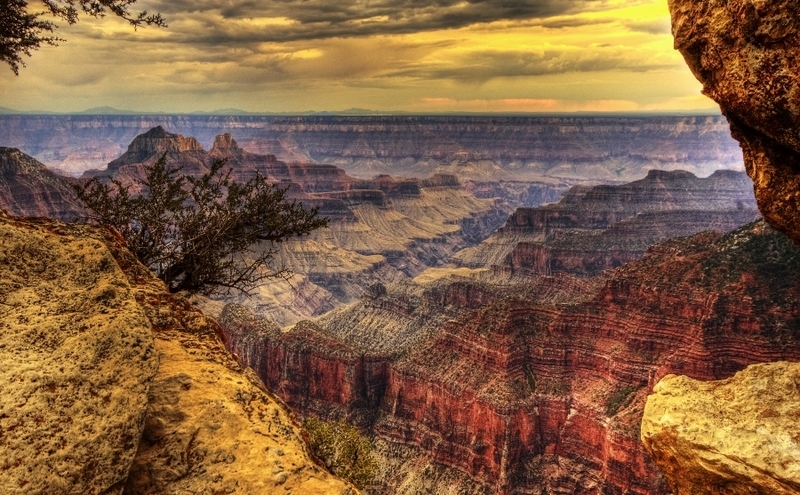 This is the perfect place to see the sunset and to hear the roar of the river. 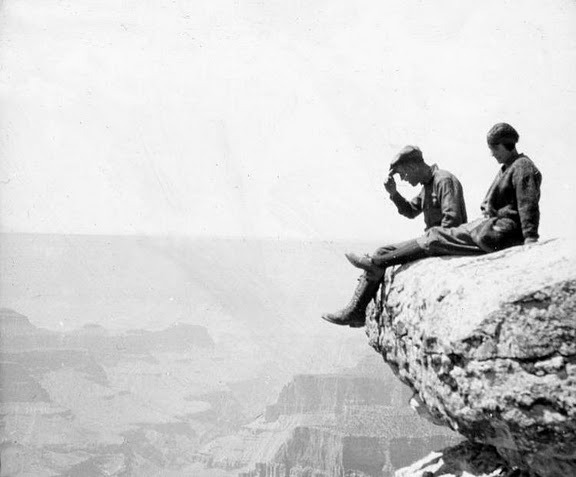 This point was remote and hard to reach for the Euroamerican visitors, but that didn't stop them from going there. Entrepreneurs like Edwin Dilworth, David Rust, Aldus and Melissa Jensen, and Elizabeth Wiley Mckee and her family to direct tourism businesses near Bright Angel Point at the turn of the 20th century.

It was not before 1917 that a real trail reached Bright Angel Point, and it was uneven and unpleasant. Still, this point was the location of the most durable development along the North Rim since a fault in the rocks allowed animals and humans to enter the Grand Canyon along sloping rocks instead of being blocked by sheer walls proper to other places. Most of the North Rim visitors who go in the Canyon start their descent of the rim here, whether today or back then.

Bright Angel Point was an important place in the Forest Service fight against forest fires. The Forest Serviced controlled this region until it became a National Park in 1919. They installed a watchtower in 1910 that they kept operational even if the site was now controlled by NPS. They rebuilt the watchtower in 1929, and in 1938 a new fixed radio was installed to help the firefighters localize the fires and to send crews to extinguish them.

In 1925, the NPS built a cabin for the rangers, a warehouse, a farm, an implement shed, duplex cottages and other outhouses, marking its position in the heart of the North Rim development. They also added a campground for the visitors in 1926, even if the next year it was moved to its current position to make room for the Grand Canyon Lodge, the main lodging facility and dining room in the North Rim. Today, Bright Angel Point is the site of one of the three camping sites set up in the Grand Canyon National Park.

With this lodging facility, Bright Angel Point become a main stop in Union Pacific Railroad's "Circle Tour" which also took visitors to Zion and Bryce National Parks, the national monuments of Cedar Breaks and Pipe Springs. In 1928, The National Park Service started offering guiding services at Bright Angel Point to explain the natural history of the Canyon and its surroundings to the visitors.

In 1930, the NPS reacted to the increasing number of tourists at the North Rim by reinforcing its presence, building quarters for the employees, a dormitory, a dining room and other buildings. The North Entrance Road, completed at the same time, helped the visitors who arrived at the North Rim by car to Bright Angel Point.

During World War II, the tours to Bright Angel Point were briefly stopped. After the war, despite increases in tourism, the North Rim never reached the number of visitors of the South Rim. Because of its remoteness, a short tourist season due to the cold and the snowy winter months, and limited space to build at Bright Angel Point, the Union Pacific Railroad was reluctant to make important investments in the area.

In 1965, the annual frequentation at Bright Angel Point reached around 130 000, but since the dealer was reluctant to invest money and that the NPS feared to overdevelop the area, the plans to extend the facilities were never realized. Instead, in 1972, the dealer Utah Parks Company left its facilities in the North Rim in the hands of the government. The NPS then signed a contract with TWA Services Inc., which renovated the facilities at Bright Angel Point. The facilities kept changing owners, and are directed today by Forever Resorts.

The water from Roaring Spring is pumped 1200m high to a 50 000-gallon water tank on the rim. A short trail takes the visitors from the Grand Canyon Lodge to a viewpoint at Bright Angel Point.