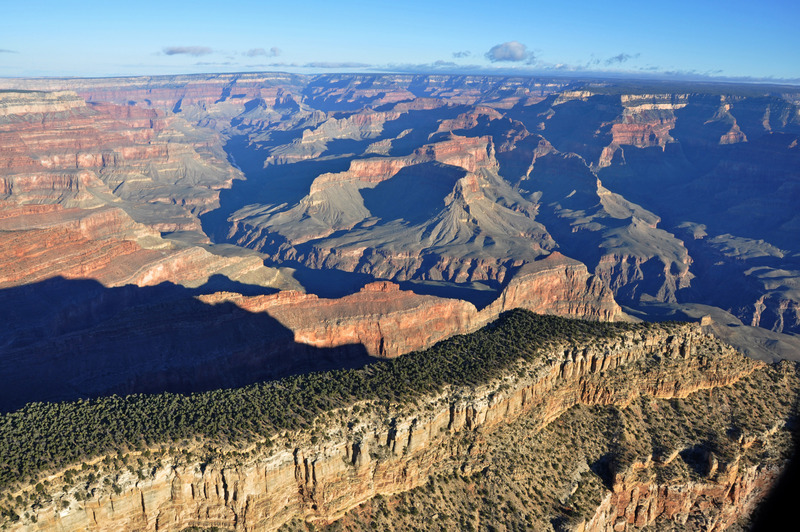 Point Sublime is one of the breathtaking vistas of the Grand Canyon. This place is less visited because of its remoteness. However, with a 4x4, you can directly get to the point and enjoy its magnificence.

The climax of Tertiary History, by Clarence Dutton, is point Sublime. Here, he summarized the geological evolution of the Canyon. This choice wasn't a coincidence, but "Sublime has eveything, and has it all the time. This is the universal viewpoint of the Canyon. From here, the Kaibab looks infinitely small". When the NPS took over the Grand Canyon in 1919, the managers thought it was imperative to build a road to Point Sublime that would be part of the North Rim road. Thanks to Dutton, the point was long known as one of the most picturesque points of this side of the Canyon. At the turn of the 20th century, Thomas McKee led tours with the Wylie Way Camp to Point Sublime, one of the highlights of his guided tour.

In 1924, the NPS built the first road to Point Sublime to help fight the forest fires, but it wasn't much of an improvement. However, the spectacular vistas offered at this point kept attracting so much tourists that the NPS made a deal with the Forest Service for its entire 29-m length to be included in the park boundaries in 1927. Two years later, the commission agent Miner Tillotson realized that the popularity of the road meant he had to add it to his crew's maintenance schedule. The road was narrow, rough, so in 1930 people worked to level the bumps and make the curves straighter, install gutters and ditches. The park administrators also installed primitive campgrounds to accommodate the growing number of tourists in the park. It was not before Mission 66 years that plans were made to built a paved and leveled road to point Sublime. This route was built over the first one to avoid other environmental issues.

Today, the NPS recommends to the visitors to reach it in 4x4. Recently, various forest fires took place here, forcing it to be temporarily closed. Camping is possible, but you need the necessary permits. Even if you need two hours to get to this isolated point, those who visited it would tell you that the view is worth the pain.