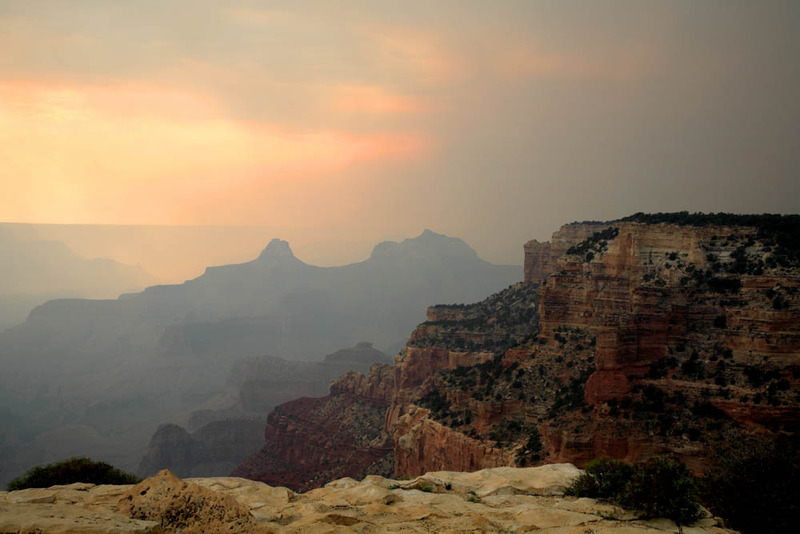 Easy to access, this point offers a spectacular view. Panels along the way offer information about the scenery, the vegetation and the wildlife. You can see Vishnu Temple south; the Colorado river southeast as well as the rapids created by Unkar Wash. You can also get here by the Cape Royal Trail.

One of the North Rim entrepreneurs was Elizabeth Wylie McKee. She and her family directed the region's main concession from 1917 to 1927. In addition to providing food and hosting, they offered tours to Cape Royal and Point Sublime, led by her husband Thomas.

After the Grand Canyon became a National Park, the administrators of the National Park Service wondered how to develop it so it becomes one of the jewels of the National Parks System. In the 1910s and the 1920s, the NPS directors imagined that they would turn parks like the Grand Canyon into nature stations by building lodging facilities and picturesque roads to show the natural attractions of the parks. While some parts of the South Rim had already been developed, the North Rim was still a blank.

One of the first proposals of the NPS to develop the area included a plan to build a long picturesque route to Cape Royal and Point Sublime. This great plan was left behind for other more pressing projects, like the South Rim because an increasing number of visitors was asking for it. During the parks first years, few roads were built or improved; there was no paved road on the North Rim, except for a 5-km section built by the Forest Service, only roads had been used by the cattle and the wagon tours led by entrepreneurs like Uncle Dee Woolley and Uncle Jim Owens.

The road to Cape Royal only got attention when the U.S. Bureau of Entomology started a war against insect infectations on the Walhalla Plateau in 1924, even if it remained a rough road. Two years later, engineers started examining a picturesque 37-km road starting at Bright Angel Point and ending in a parking lot at Cape Royal, overlapping on the ancient wagon route and primitive roads built in the past years. The road four years to build at a cost of over half a million dollars, a huge sum in 1924, and was connected with the North Entrance Road, turning Cape Royal into one of the easiest points to access for the visitors at the North Rim. Later, the construction camp that housed the workers on the road to Cape Royal became a Civilian Conservation Corps camp.

To attract more car drivers who had small budgets, the NPS developed a primitive camping site at Cape Royal in 1931. Back then, dealers on the North Rim offered guided tourist trips by car to Cape Royal.

Though Utah Parks Company would have wanted more development at Cape Royal and at the other sites, the Great Depression, combined with the desire of the NPS to work on a sense of nature, reduced the constructions plan at this period. The Company had plan to build facilities for the visitors at Cape Royal similar to the Grand Canyon Lodge, but like most plans hatched out in 1929, it followed the stock market. Even if construction plans had been considered, Cape Royal has never really been developed.

In 1959, workers rebuilt the Cape Royal Road, making sure to keep its original alignment to avoid other environmental damage. The crews improved the leveling and the drainage, widened the surface and extended the parking lots along the road. Today, the 37-km road from the Grand Canyon Lodge to Cape Royal goes through forest of spruce, ponderosa pines and aspens at Walhalla Plateau, fields filled with colorful wildflowers, deer, squirrels. A round and easy trail at Cape Royal takes the hikers on a paved path with interpretation signs that explain the natural history of the region and offers views on Unkar Delta and the Colorado River.