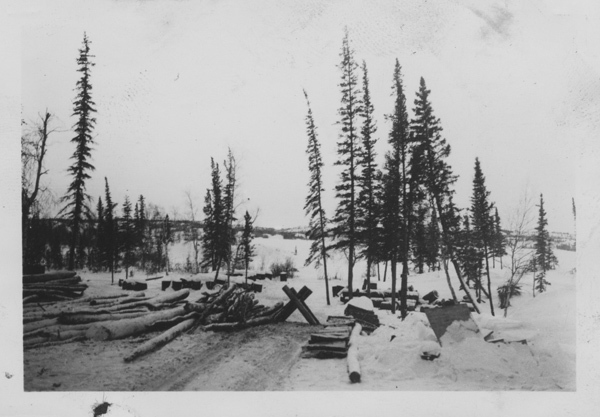 This is where forestry and fishing activities took place and from the earliest days of Yellowknife hardy bushmen used this area for milling logs into firewood and rough timbers.

Tom Reed, Carl Carlson, and Pete Racine were some of the first men to use this area for commercial woodcutting, often using horse-drawn sleighs to transport the cordwood to their customers. Starting in 1946, new firewood merchants ruled The Woodyard – Einer Broten and Hans Hansen. Many of the woodcutters hailed from Scandinavia and were expert hewers of wood and log construction. The Woodyard was not just a commercial sawmill area - to lodge the men cutting wood for them, Broten and Hansen would modify Cat Train cabooses and transform them into shacks.

During the 1960s, there were many small cabins built in the streets around The Woodyrad, Willow Flats, and throughout Old Town. These houses had no formal address. Some cabins had colourful names allowing people to identify them:, The Haunted House, Slant Six, or Ottawa House. Sometimes the house bore the name of its owner, and one would mention Dave Smith’s shack or Charlie Saunders’ shanty, and because the town was small, everyone would know where you were talking about.