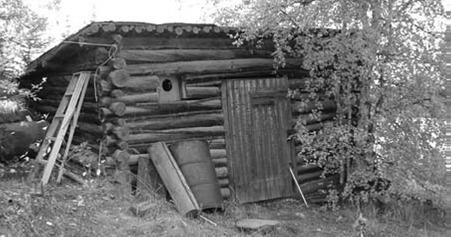 This 1937 log cabin served as a warehouse for the Mining Corporation of Canada, which arrived in Yellowknife to develop a rich gold find at Gordon Lake, 80 kilometers north east of Yellowknife.

Photo source: Heritage committee of the City of Yellowknife.

As one of the first buildings in the settlement, this tiny log shack has seen Yellowknife grow from a prospector’s outpost to a major mining center!

It was in 1898 that gold was first reported on the Yellowknife River but as it was a very remote area at the time and as gold in the Yukon was more rewarding, prospectors did not rush to Great Slave Lake.

In the 1930s, the situation had changed. The airplane was making it much easier to explore remote areas of the Canadian North.

In 1934, prospectors Johnny Baker and Hughie Muir discovered very high-grade gold on the east shore of Yellowknife Bay. The following year, more gold was staked on the west side of the bay in response to geological observations by government surveyors. By 1937, enough gold was discovered in the Yellowknife area for mining companies to arrive and begin commercial development. The Con Mine became the first mine to pour a gold bar on September 5, 1938.

In 1938, Yellowknife was a growing town that supplied the needs of mining companies, independent prospectors, and trappers. A population of very determined people lived in a loose assortment of tents, log cabins and makeshift shacks. The boom ended with the start of World War II in 1939 and slowly mines began to close because the workers joined in the war effort and supplies to keep the mines running were being rationed.
Gold fever came back even stronger in 1944 with the announcement of the discovery of another major gold deposit at the Giant Mine. Several other mines would open and close in succession, with the price of gold fluctuating over the years.

It is estimated that more than 15 million ounces of gold were extracted from the ground around Yellowknife.

Nowadays, diamond mines have replaced the gold mines, affording a work opportunity for those who want to experience their own Northern Adventure!