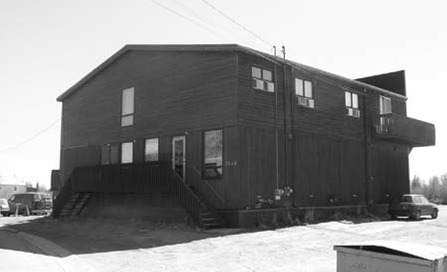 This residence is the old entrance lobby of a movie theatre!

Photo source: Heritage committee of the City of Yellowknife.

The Capitol theatre in Yellowknife opened its doors in November 1947 in the city’s present-day downtown district, in the new part of town. The Theatre was a huge improvement over the original Pioneer Theatre in the Old Town, which opened in 1938, and eventually became obsolete. The Capitol Theatre was one of the few places of entertainment in early Yellowknife and its shows always drew a crowd. It was also the scene of many functions including school performances and the first governing NWT Council meeting ever held in the Northwest Territories in 1951 (the government previously met only in Ottawa).

The hall could seat about 400 patrons in comfortable green plush chairs. And if you were on a special date that evening, you made sure to get to the show early enough to enjoy the infamous double ‘love seats’!

The lobby entrance also held commercial businesses, including the clinic of Yellowknife’s first doctor, Dr. Oliver Stanton, and the local dentist. The second floor held residential suites occupied by the theatre’s owners, William and Kitty Cole, and their employees.

By 1976, the old theatre was in need of replacement. New owner Shorty Brown decided to build an entirely new cinema complex which opened in May 1977 on another downtown lot. The movie theatre hall was torn down, but its entrance lobby section was saved. On a warm summer night in June 1978, the entrance hall was moved to Old Town. Imagine how impressive it would have been to watch the immense structure slowly pass by on its way down the hill along Franklin Avenue to its new home on the waterfront!