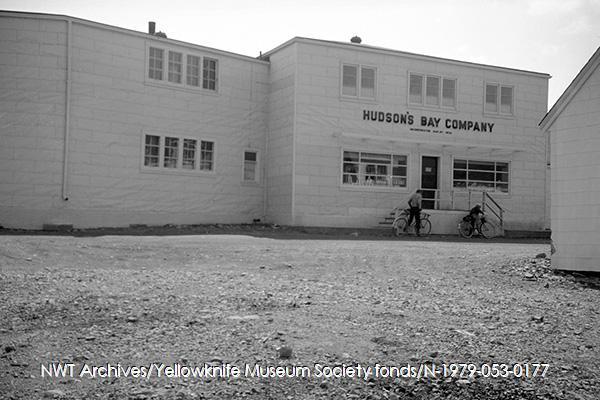 This building was built by the Hudson’s Bay Company in 1945 to replace a smaller store destroyed by fire. People went there to buy exclusive products from The Bay, like the much-touted striped blankets. Since 1960, the building standing before you has only been used as a warehouse.

The Hudson’s Bay Company opened a post in Yellowknife during the gold rush of 1938. In January 1945, the original post was destroyed by fire, and the larger storefront and warehouse you see today was built to replace it, and opened in November 1945. There you could purchase products exclusive to the HBC, like their famous striped blankets. The store featured men and ladies wear, a grocery section, and prospecting and trading supplies. In 1947, a modern downtown store was built. Thereafter the Old Town post catered almost exclusively to bush orders, fur trappers, and prospector supplies, until 1960 when the Old Town store closed and was only used as a warehouse.

The HBC played a major role in the history of the Northwest Territories from the time of its formation in 1670. The company had fur trading posts across the Canadian west, from Hudson’s Bay (it’s namesake) to the Pacific and Arctic Oceans. These trading posts helped set the foundation for the first European establishments in the Northwest Territories and opened up the first trade relationships with the aboriginal people who lived in North American prior to the arrival of Europeans. .Assistance from the Aboriginal peoples often allowed the traders to survive the harsh conditions found in the North and they acted as guides because of their expertise of the resources and geography.

The Aboriginal women were especially important. Without them to cook, treat injuries, prepare food stocks for the coming winter, repair cracks in the canoes, make and repair clothing, and make moccasins and snowshoes so necessary to travel in winter, not many coureurs des bois would have survived!

These alliances led to partnerships that resulted in the birth of the Métis people, who were born to an Aboriginal mother and a French coureur des bois.

Evidence of the historic HBC can still be seen across the north today, where the fur trading posts have been replaced with modern grocery outlets called Northern Stores in many of the aboriginal communities.