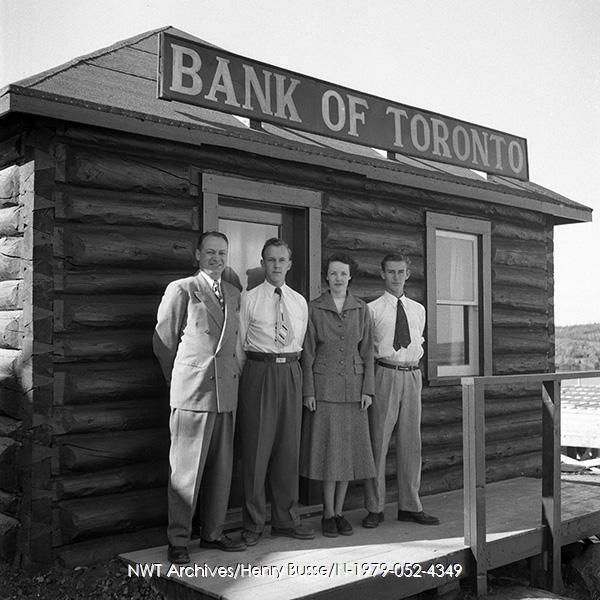 From 1944 to 1951, this rustic cabin housed a branch of the Toronto Dominion Bank. It was built by John Stakson in 1939 near the Rock on the old Yellowknife main street, the city's main commercial artery at the time. This photograph dates back to 1950.

The cabin was originally built by John Stakson in 1939 below The Rock, at the time the town’s main business street. Stakson sold the cabin to the Bank of Toronto in October 1944 when they decided Yellowknife was a great place to open up a branch. It joined the Canadian Bank of Commerce, the town’s first bank.

The banks served gold miners who came to cash their paycheques. In 1947, a basic miner’s salary was $1.08 hour, or $8.64 for an eight-hour day of work. The miner then had to deduct $1.00 per day for food and lodging expenses.

The Bank of Toronto closed its most northern branch in 1951 because of poor profits. Regretfully so, because the bank was one of the most secure in Canada: any potential robbers would have little chance of escaping from Yellowknife without getting caught!

But in 1954 that didn’t stop Tony Gregson  from trying his luck and committing a spectacular robbery, not from the bank, but from his employer, the Discovery Mine. Gregson carefully planned to quit his job just in time to travel on the same plane that was transporting two gold bars produced by the company. The man had been planning the deed for several months and had ordered canvas bags from Edmonton that looked like the company’s bags, and also two bricks of lead. Taking advantage of the pilot’s distraction, and believing he could succeed where all his predecessors had failed, Gregson replaced the pure gold bars with the lead bars in the bags and disappeared without a trace when they landed.

Gregson disappeared into the wild with 60 kilos of gold, worth $54,000 at the time – a real fortune! The theft was not discovered until much later when the bag that originally contained the gold was opened.

The thief was caught three years later and sentenced to thirty months in prison. In the court Gregson stated that he had scraped down the gold bars with a hacksaw over time to exchange for meals and hotel rooms or plane tickets, living the good life!
Speaking of gold, in 1963 Giant Mine, at the time the third largest gold producer in Canada, extracted 1,000 tons of ore each day, pouring over 240,000 ounces of gold that year. The gold bars, being 99.9% pure, weighed a hefty thirty kilograms each.

The gold bars were weighed each day and wrapped in canvas, placed between two metal bars and stored in a safe in a locked vault. Each month a clerk would lay a wooden plank on the back seat of the company’s van and load up approximately fifteen gold bars.  He would then drive to the post office at the centre of town with some 450 kilos of pure gold, which would then be sent to the Royal Canadian Mint in Ottawa. Five kilometres driven by the clerk, with no police escort or weapons, and never a mishap.