Thirst for freedom and adventure

The attraction of the north

In 1950, Chibougamau was still a mining camp. Most men lived in town or in bunkhouses near mining projects. In the evening, most everyone ended up at the hotel to drink and settle accounts. Others took to the woods, attracted by the great outdoors and the opportunity to make a fortune.

The beginnings of the Obalski Hotel 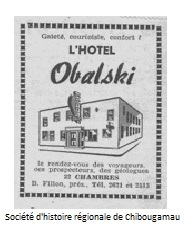 The first three Chibougamau institutions were the Department of Mines office, Scotty Stevenson’s tiny general store and the Obalski Hotel, now known as the Gwillim Bar. Built in 1950, it had “12 rooms on two floors, many drunks and no liquor license.” Beer was served in cases under the tables. The hotel also hosted “voyageuses” from Montreal, which earned its owner, Joachim “John” Bordeleau, threats of divine punishment from the parish priest.

Full reference for the photo: Advertisement for the Obalski Hotel

Quote from the book Chibougamau dernière liberté by Hubert Mansion

A Frenchman of Polish origin, Joseph Obalski arrived in Quebec as a mining engineer. Having heard of promising veins near Chibougamau Lake, he went there on an expedition in 1904. At that time, the journey was by water—a challenging route with fifty portages. Mr. Obalski discovered gold and, once he returned to Quebec, hastened to publish his findings. Gold fever would soon seize the region.

A native of Sault Ste Marie, Joe Manzoti, aka Joe “Mann” Chibougamau, was a mountain of a man with broad shoulders who embodied the pioneer lifestyle. The legend made him out to be an outstanding prospector, a trapper and an adventurer who didn’t mind a good fight. His nickname stuck until his death in 1975.