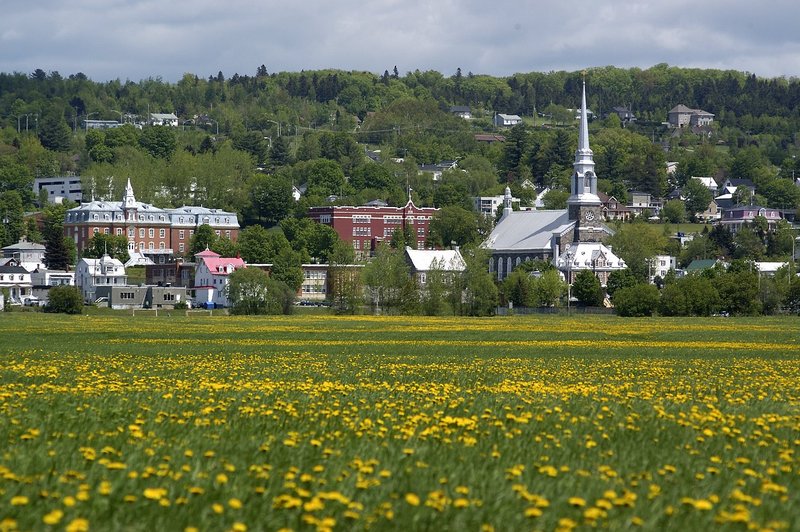 The parish institutional entity of Saint-Joseph-de-Beauce is comprised of 5 categorized buildings built between 1865 and 1911:  a church with a vestry, a presbytery, a convent, a college and an orphanage. They are located on the land that was cultivated by the parish corporation, commonly called ""land of the parish priest"". It was a community land reserve administered by the corporation's board.

At the time, this land and its farm ensured revenues for the church and tithe (part of land products given each year to the Church by parishioners) as well as for the surplice fee (revenues from clergy services). In addition to these buildings, the land of the parish corporation of Saint-Joseph is now home to the recreation center and a waterfront park, an elementary school, apartment buildings for retired people, a retirement house for seniors and 3 cemeteries. Together, they form a community hub perpendicular to the Chaudière River and the main and commercial street, major street going up the hillside and perfectly merged into the urban layout.

The parish institutional entity of Saint-Joseph-de-Beauce is Quebec's most important one due to its size and the number of functions found in it. It demonstrates the importance of institutions developed around the church, the focal point of Quebec French and Catholic villages, at a time where the Catholic Church, following the British Conquest of New France in 1760 and up until the mid-20th century, acted as a leader of the French-Canadian society and as a protector of the French culture in America. The parish institutional entity is a tribute to the memory of the Catholic parish, of solidarity, education and French culture in America.

These buildings were designed by famous architects of the end of the 19th and beginning of the 20th century. They're made of stones and bricks and all have a prominent central section at the front, and present an interesting unity in their architectural forms. Located in the magnificent natural site of the Chaudière Valley in the Appalaches mountains, Earth's oldest mountains, the entity marks the city's environment with its outstanding qualities. This is why the Quebec Department of Cultural Affaires classified the site as historical on October 15, 1985.

The whole is a uniquely diversified and rich building inventory for which the city was named Canada's cultural capital in 2006.

Church view from the presbytery's porch 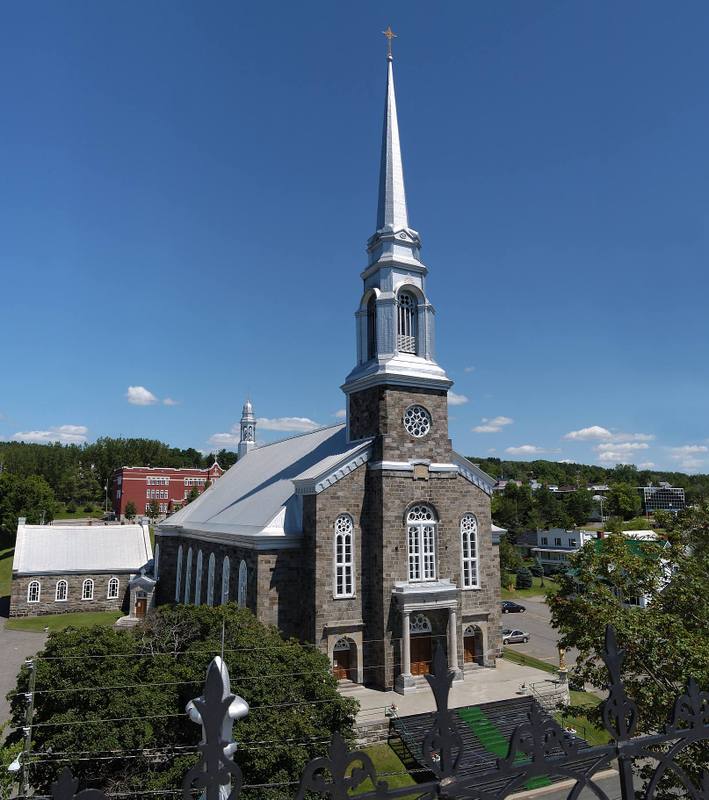 The parish's first chapel-church was built in 1738, on the west shore next to the estate manor. Located in a flood zone, and after repeated assaults from the Chaudière River, the church quickly fell into ruins. 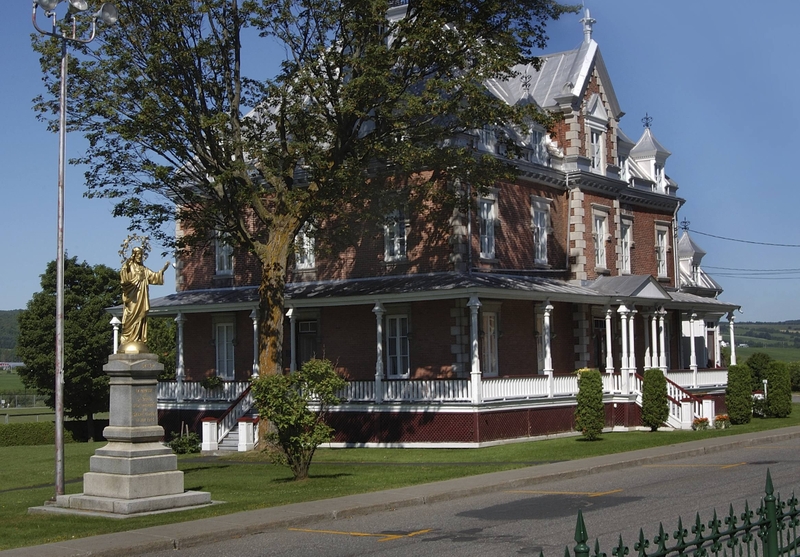 The presbytery is the gem of  Saint-Joseph's institutional entity. Like many other buildings from the end of the 19th century, its decorative elements include many architectural styles that were popular at the time. Georges-Émile Tanguay innovated with a French neo-renaissance look. 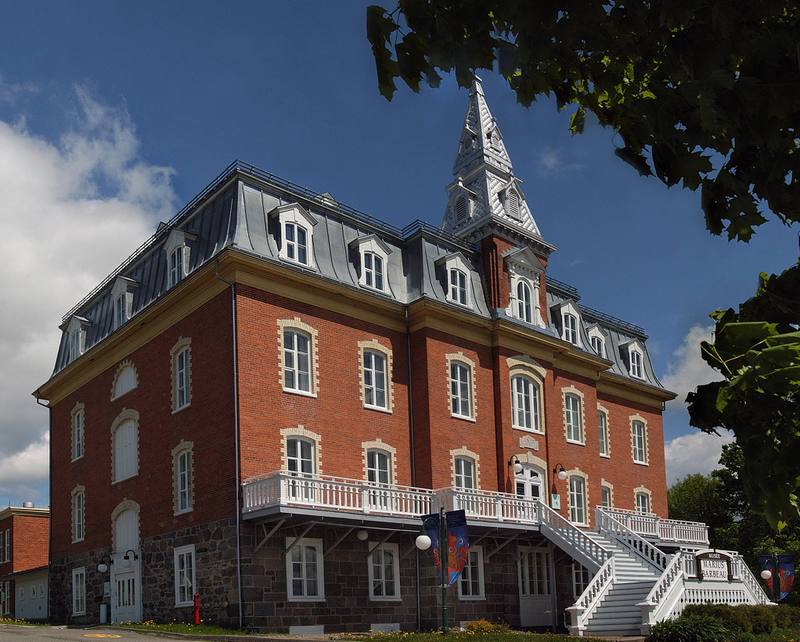 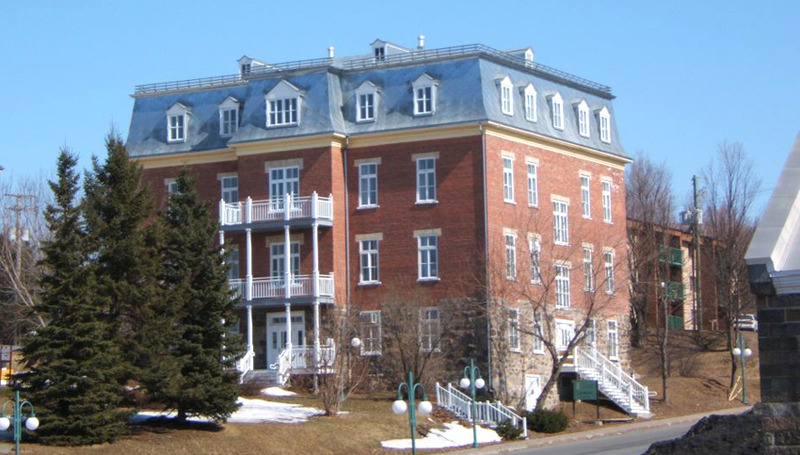 The parish priest builder Charles-Édouard Carrier agreed with Mother Sainte-Christine, a former convent superior who became Superior General of the Sisters of Charity, to repatriate in Beauce the little children from Beauce who lived in their Quebec City orphanage. On February 24, 1907, he declared to his parishioners that he intended to build an orphanage in Saint-Joseph. 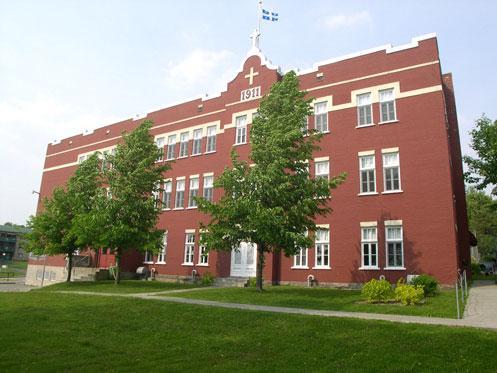 The building was built in 1911: it is the right wing of the current building. Laurenzo Auger is the architect who designed the plans, and Joseph Linière Vachon, a carpenter-entrepreneur from Saint-Joseph, realized them.