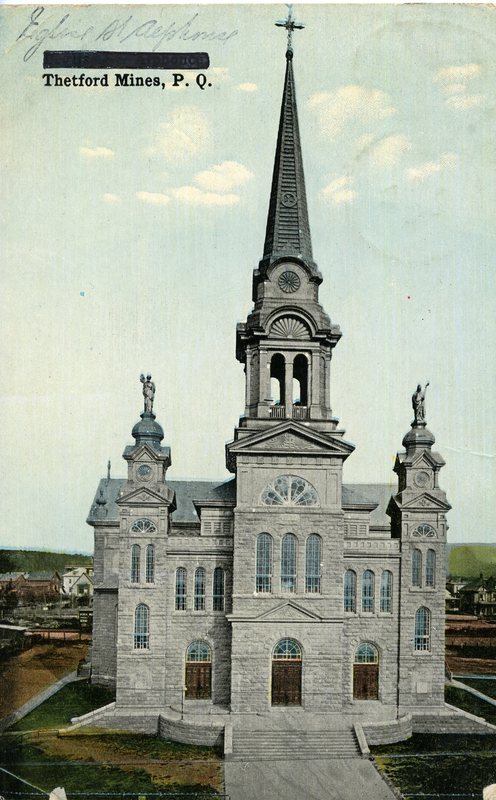 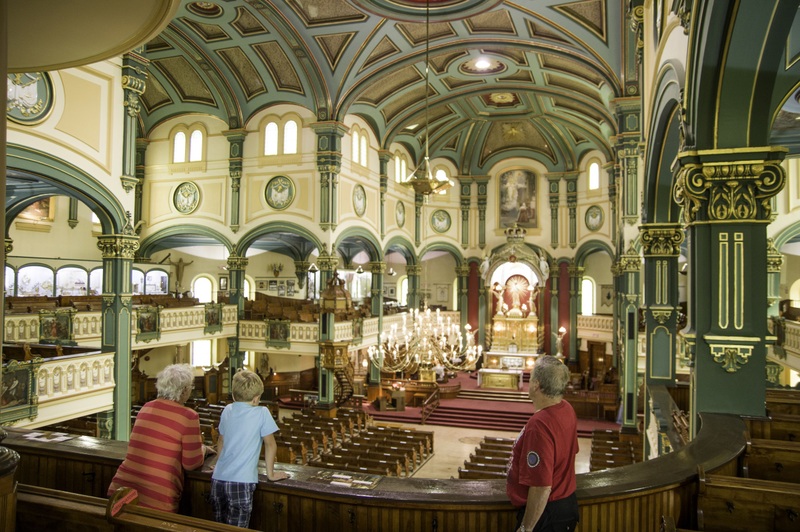 View from the inside of Saint-Alphonse Church (2010)

The discovery of asbestos in 1876 led to the formation of a first urban nucleus on the site of the future village of Kingsville. A few years later, the religious authorities authorized the creation of the Saint-Alphonse mission, which was to be served by Father Joseph-Alphonse D'Auteuil. By the end of the 1870s, the latter regularly visited the first Catholic families living in the township of Thetford. However, it was not until 1896 that the parish of Saint-Alphonse of Thetford was officially erected and named in honor of its founding parish priest.

During the first years of the Saint-Alphonse mission, religious services were celebrated once a month in the private home of Mr. Napoléon Métivier. However, with the increase in population, the construction of a larger and more comfortable place of worship was necessary. It was in 1885 that a real chapel was built, at the cost of 1800$, at the site where the presbytery now stands. The inauguration took place on October 18 and was dedicated to St-Alphonse-de-Liguori.

A few years later, in 1897, there was a body of churchwardens whose first official act was the signing of a contract for the construction of a true church, which was more extensive and better suited to the needs of the growing population. Built in the same year according to the plans of the architect David Ouellet of Quebec City and approved by Monsignor C.A. Marois, Vicar General, the contractor Joseph Saint-Hilaire of St-Romuald was entrusted with the construction of the new church at a cost of 27,500$, which included the heating system. The inauguration and blessing of this new temple took place on January 6, 1899. Unfortunately, this new church was completely destroyed by fire seven years later, on February 19, 1906.

The construction of another church was once more necessary, and the religious authorities quickly gave the green light for the erection of a new building in the same place as the previous one. The new St-Alphonse church was built in 1907 at a cost of 107,000$. This granite stone building, in Neo-Romanesque-Baroque style, was erected according to the plans of the architects Joseph-Pierre Ouellet and Pier Lévesque. A set of four bells, which were molded by the House Paccard of Annecy France, was inaugurated and blessed on December 22 and 23, 1908. The new Casavant & Brothers organ (model342) was also inaugurated at the same time during a concert. St-Alphonse church, with its capacity of more than 2000 places, is still the largest church in the diocese of Quebec.

The churches profoundly sculpted the landscape of many towns and villages in Quebec. These buildings are landmarks in Quebec's cultural landscape and by its monumental appearance, the Saint-Alphonse church is no exception. It has a cross plan whose dimensions are 51.8 m long by 24.4 m on the façade and 39 m at the transept. It is capped with a two-sided roof covered with Canadian-made sheet metal. The facades of the church are dotted with fine details, including oculi, rectangular windows surmounted by a semicircular arch on the second floor and geminated bays, that is to say identical windows grouped by two at the level of the third floor.

Its main façade offers a volumetric composition in three parts. In the center of it is the main tower whose entrance is surmounted by a pediment. A series of three windows details the central part. The base of the bell tower is composed of another decorated pediment and a half-rose. Two square towers surmounted by gables border the facade. Originally, magnificent gold statues by the sculptor Louis Jobin of St. Joseph and St. Alphonse were on top of the pinnacles with bulb-shaped domes. Nowadays, the statue, which is 4 meters high, has been restored and remains inside the church.

Finally, we can recognize the neo-Romanesque style of the church with its arches in cradle, its rounded vault with multiple caissons and its transept. The interior ornamentation is inspired by the baroque. In 1992, the building was extensively restored at a cost of 300.00$. Since the beginning of the 2000s, an exhibition of the religious heritage of the region has been presented in the rood screen. It is considered one of the most important of its kind in Quebec. 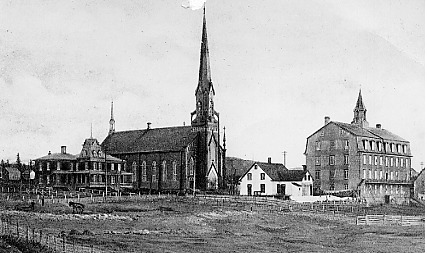 Second Saint-Alphonse Church (before 1906). One sees the presbytery, the convent and the house of doctor Charles Morin. The latest is located on the site of the future De La Salle College.