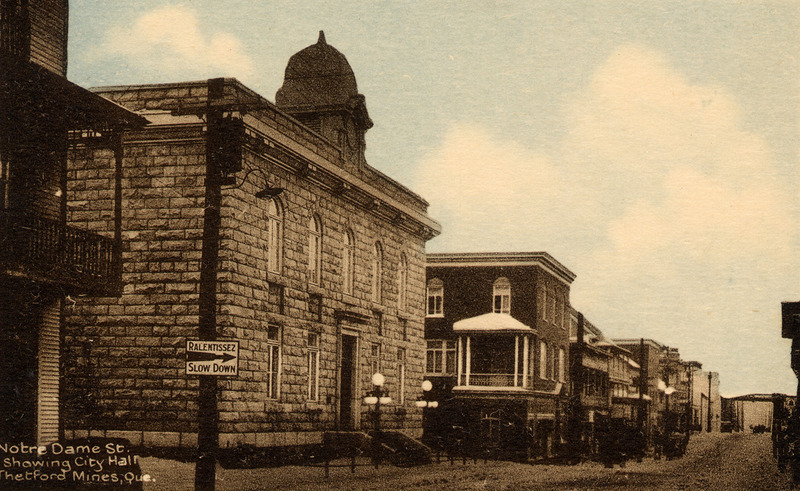 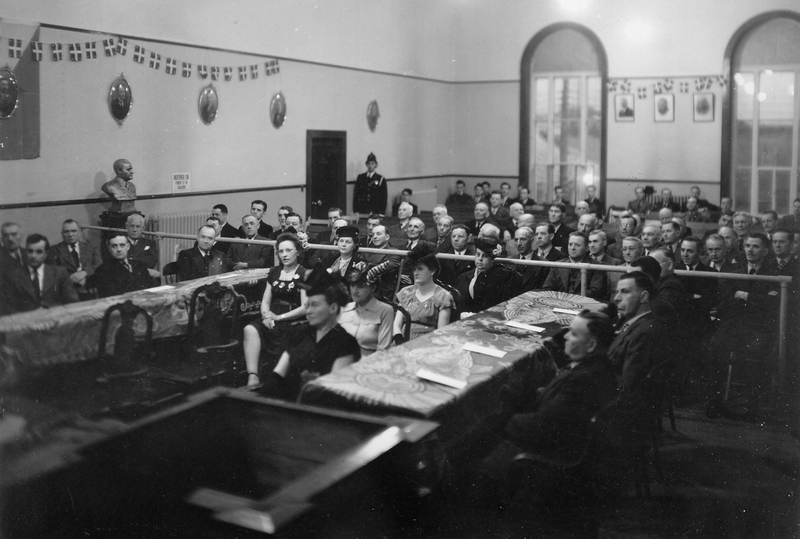 View from the inside of the City Council room in mai 1947.

On May 20, 1905, at the initiative of Mayor Benson James Bennett, the village of Kingsville, which was founded in 1892, was incorporated as Thetford Mines. Its population then exceeded 5000 inhabitants, classifying the new entity among the ten most populous urban municipalities in Quebec. The law of incorporation confirmed the same territorial limits as those of the village of 1892, the only difference being that the population density had increased considerably in this territory.

With this new status granted, and endorsed by this 1905 law, the city was now divided officially into four districts, with two aldermen per district. Henceforth, eight aldermen and a mayor formed the municipal council. But the authorities of the village of Kingsville and subsequently of Thetford Mines did not always benefit from spaces belonging to the municipality to hold the City Council meetings. In the 1890s, meetings were held at the secretary-treasurer's office. The first to occupy this post, Théodule Turcot, welcomed the municipal representatives from 1892 to 1896.

Starting from February 15, 1896, the sessions took place in the Louis Roberge room, at the residence of notary Laliberté. As of October 8, 1901, the deliberations of the elected representatives took place in Salle Roy until May 27, 1907. After, the City Council meetings would then be held in the hall of the F.X. Labranche building. It was notably in this room that religious services were celebrated for a time after the flames had destroyed the church of Saint-Alphonse on February 19, 1906. Finally, from November 17, 1908 until the 4 August 1910, the municipal representatives met in the Salle Ferdinand Côté, located on Notre-Dame Street. .

In 1910, the municipality acquired the buildings of the merchant Joseph-Édouard Demers, located on the site of the current town hall. This merchant was an alderman of the village of Kingsville in 1896, and mayor the following year. He was also an alderman for the city of Thetford Mines in 1905. Later he was elected as a provincial deputy under the Liberal banner of Mégantic County from 1912 to 1916. Now owned by the city, these buildings served as store, residence, town hall and court of justice. The meetings of the Council were held here until 1925.

Finally, it was under the mandate of Mayor J.O. Landry (1923-1925) that the by-law was passed to kick off the construction of a real town hall. The old wooden buildings were demolished to make way for a stone building, symbol of solidity and stability. This new building, which is still standing today, had a cross plan whose elevations were blocks of gray granite with a rustic finish. The building, covered by a flat roof and characterized by the coronation of its openings also has the arch at the level of the fenestration of the floor, the headband which surrounds the top of the walls, its flag mast and its tower clock, which emphasizes the civic vocation of the building. The first meeting of the Municipal Council was held on May 7, 1925. The official inauguration of the new building took place two weeks later, on May 24, 1925.