Construction of the King Cash Store buildind in 1903. 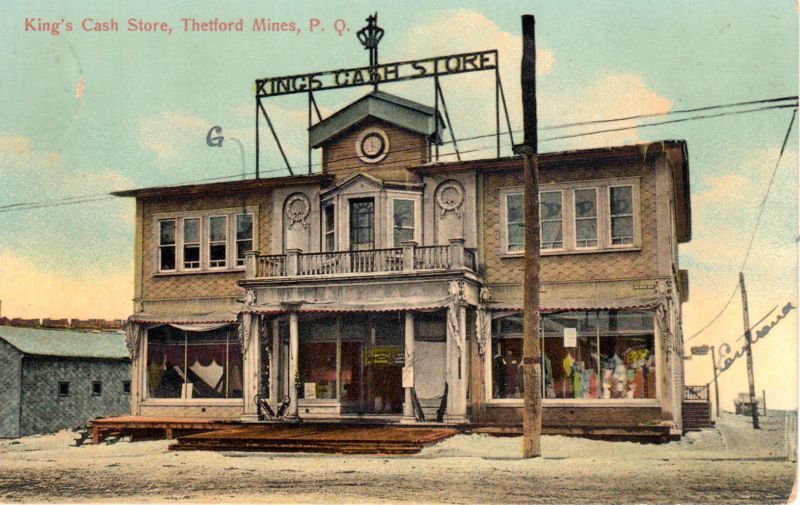 It was in 1892 that the village of Kingsville was officially erected, consisting of the first dwellings clustered near the mines. The name adopted by the village, which later became Thetford Mines, illustrates well the place occupied by the mining industry and the influence of the King family. At that time it had the largest share of land on which Kingsville was erected. James King was an influential figure, including a vice-president of the Quebec Mining Association, which included the owners of the asbestos mines, and a Conservative deputy from 1892 to 1897.

It was in 1878 that James and William King founded the King Brothers Co. They engaged in the exploitation of asbestos on Lot 26 of Ranges V and VI of Thetford Township. The King brothers benefited from an important family fortune created by the exploitation of wood. They were the largest lumber merchants in the region and were able to finance the operation of their asbestos mine, King Brothers Co, which they named Hampden Mine in their official reports.

It was around 1903 that the construction of the building which would house the store of their company, the King Cash Store began. When opened in 1905, there were clothes, dry goods and furniture. At the time, mining companies strongly urged minors and their families to buy from their businesses, paying their workers in the form of tradable coupons at the general store. Thus, it was possible that some employees at the end of the month owed more to the company than the salary they earned.

In October 1915, the first general strike in the mining industry broke out, notably on the basis of a demand for a wage increase. The miners also demanded to receive all their wages in cash, and no longer in vouchers. They thus claimed the freedom to make their purchases wherever they pleased, and no longer in the shop belonging to the mining companies. They would succeed and this obligation would end as a result of this first major strike.

A few years later, in September 1919, the King Cash Store stopped its activities and closed. The leaders of the King Mine decided to expand and relocate their offices. From then on, the building housed the offices of the Asbestos Corporation.

This imposing two-storey building, characterized by its flag mast, was capped, on the one hand, by a roof with two right sides and, on the other hand, by a flat roof. The cover was made of stainless steel sheet. The building was partially covered with shingles and asbestos-cement panels. The shingles are diamond-shaped, entangled in one another. Originally, the building was probably completely covered. Over the years, the building has undergone several transformations that have altered its original architecture. Its interest lies, therefore, in part on its symbolic value, which relates the history and experience of the businesses run by the employees of the major mining companies. Now this building houses offices and shops.

James king. It was in honor of the King family that the village of Kingsville was named. Later, it will become the town of Thetford Mines.