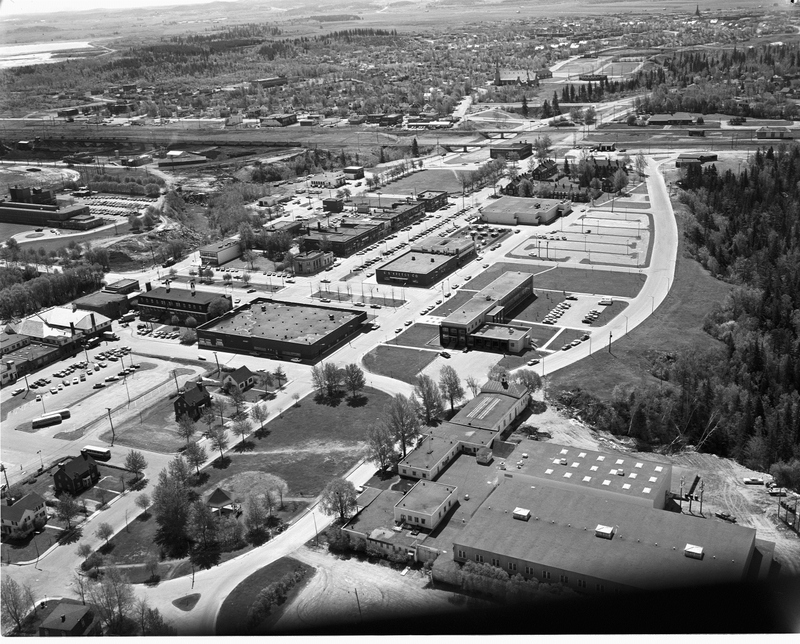 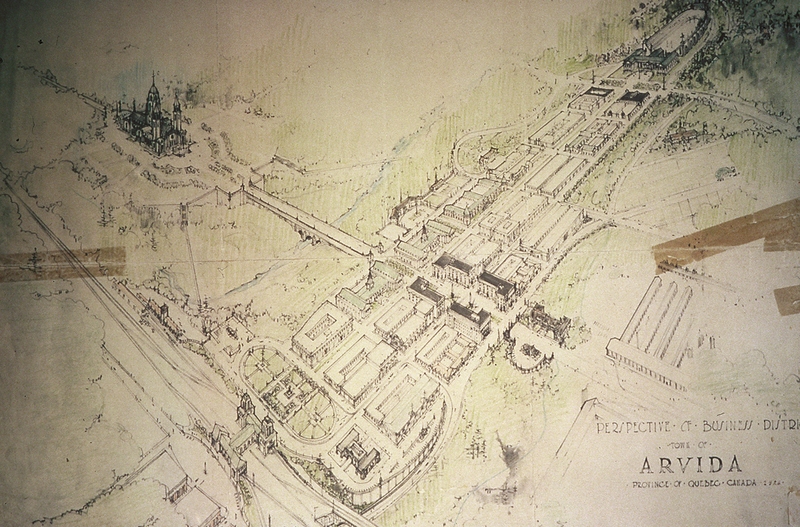 The original plans for Arvida's downtown business district were made by architect Harry Beardslee Brainerd in 1926. 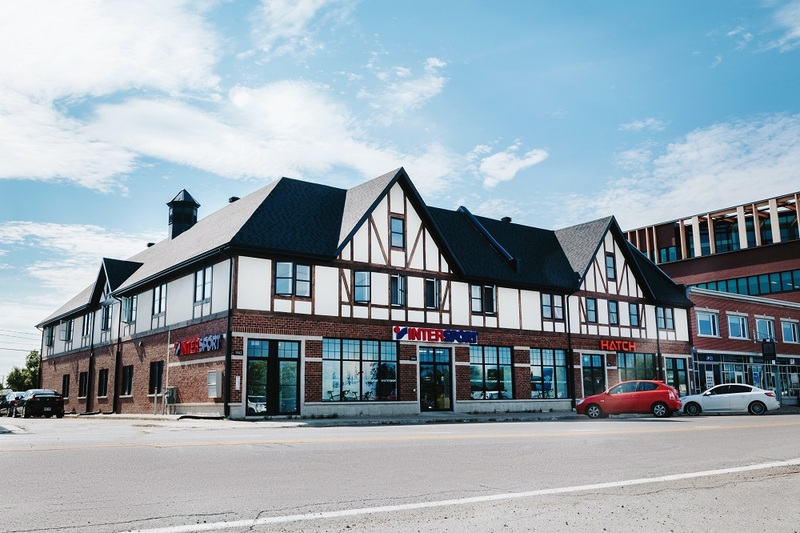 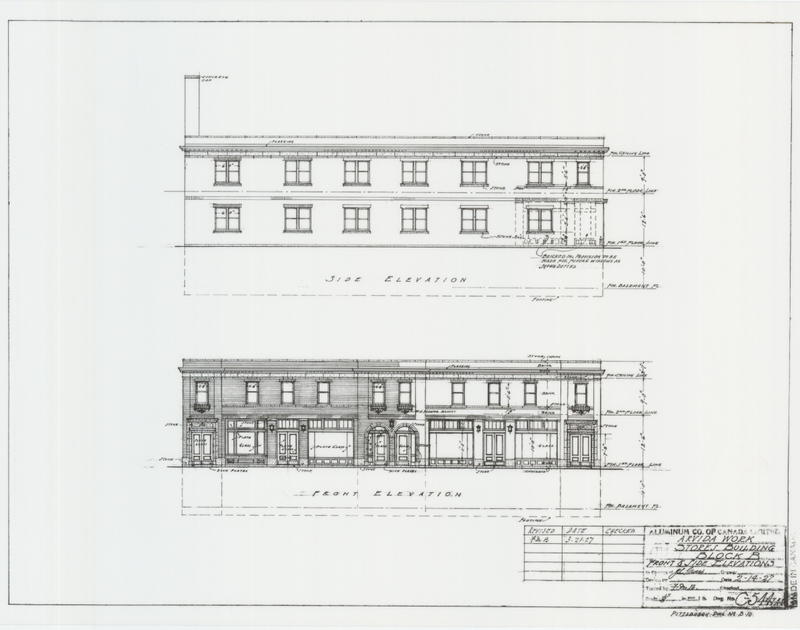 Block B, on Davis Street. The building was built as an example by Alcoa in 1927. 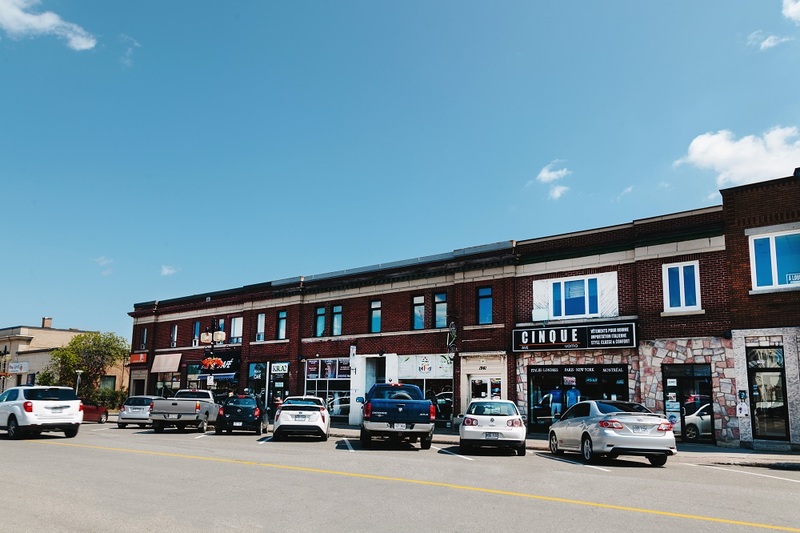 Block B, built by the Aluminum Company of Canada in 1927. 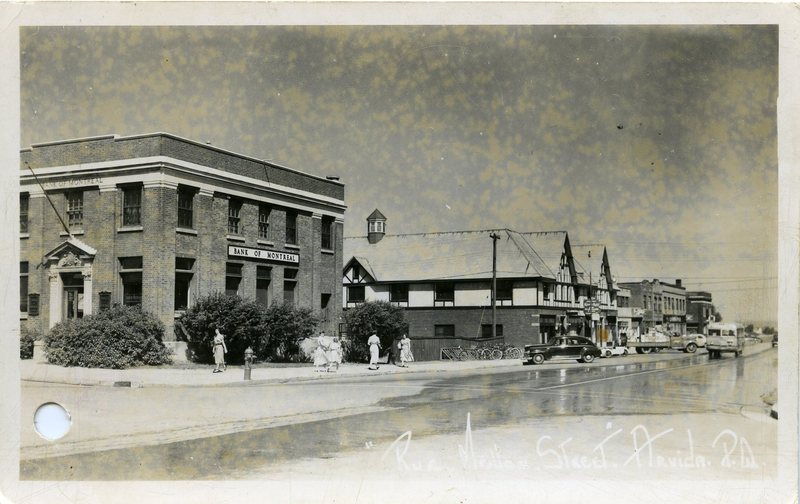 Mellon Boulevard, with the Bank of Montreal in the foreground and Block A in the background. 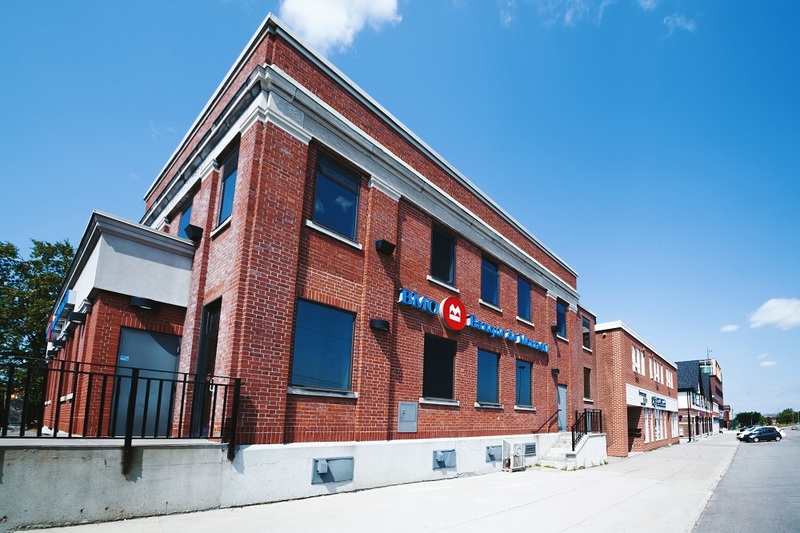 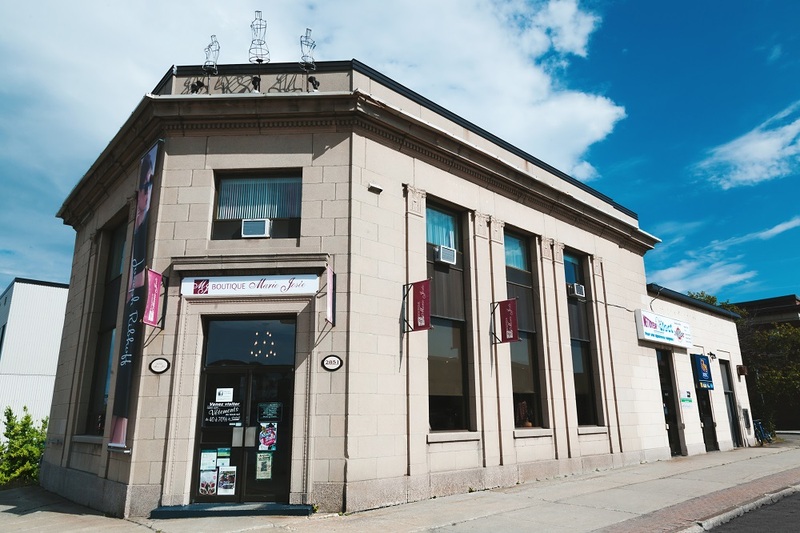 The former Royal Bank, built in 1927. The building is now occupied by the store Marie-Josée. 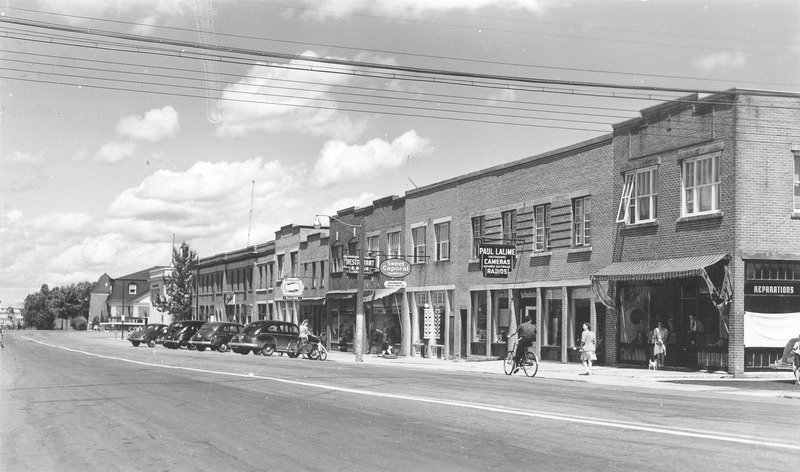 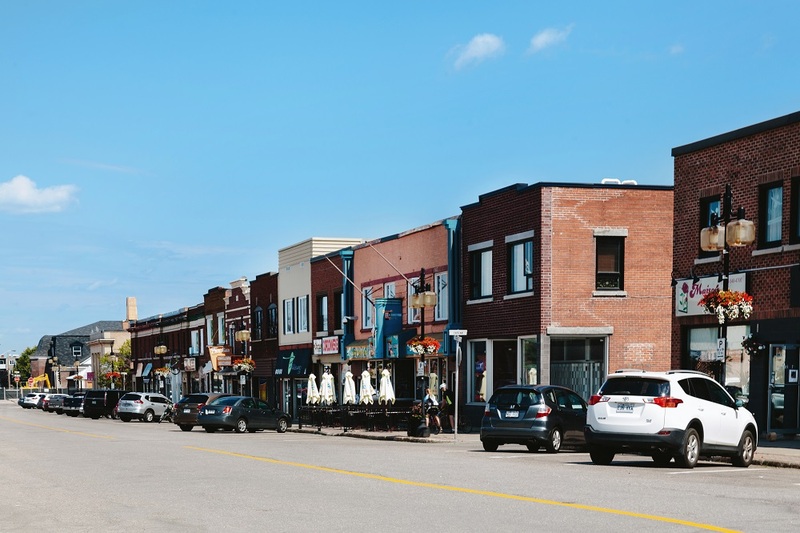 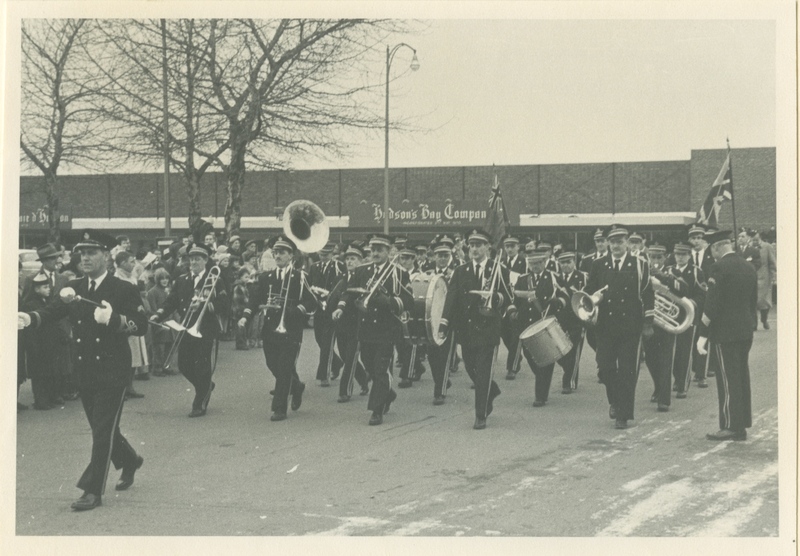 The Arvida Band with the Hudson's Bay store in the background. November 11, 1956. 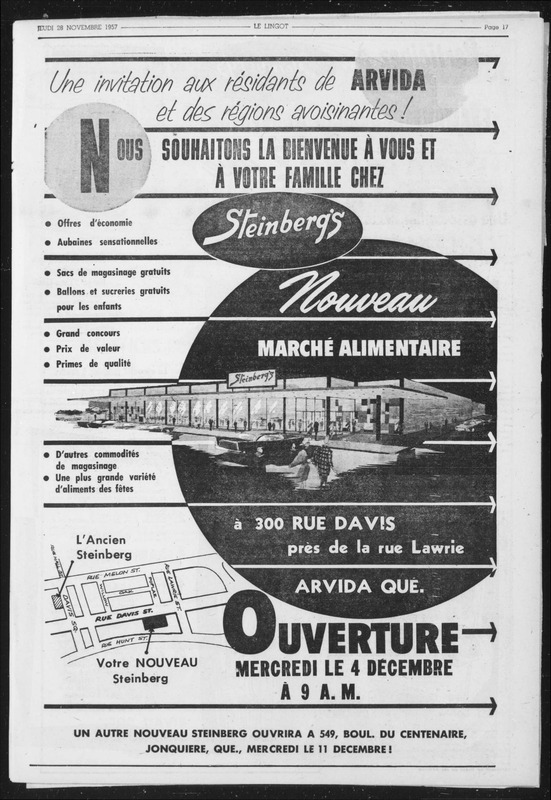 Opening of the new Steinberg's on Davis Street in 1957. 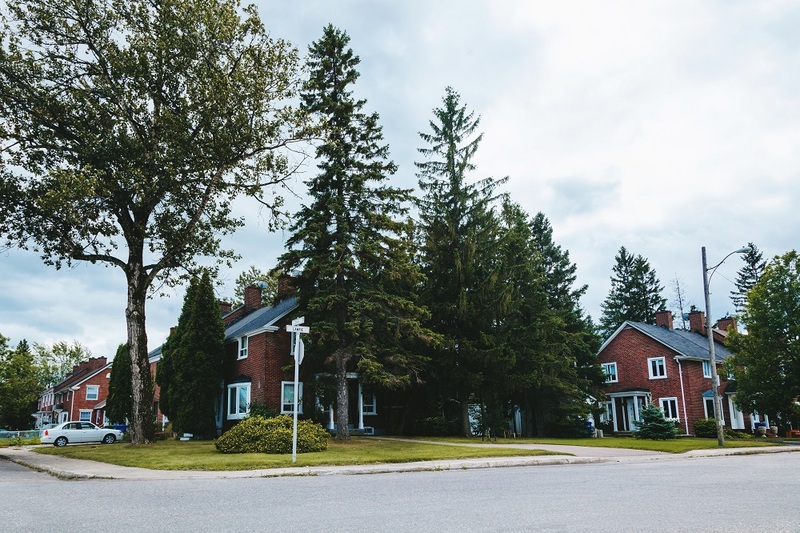 Townhouses of the Athlone Gardens built during the Second World War according to plans by architects Fetherstonhaugh and Durnford.

Arvida’s downtown area is representative of the Civic Art movement, an urban planning trend in the 1920s and 1930s, which followed in the wake of the City Beautiful movement. By establishing itself in the region, Alcoa wants to make Arvida an aluminum metropolis. « The Perspective of Business District, Town of Arvida », prepared by architect and urban planner Harry Beardslee Brainerd, projects a monumental and modern city centre linking a cathedral on one side with the factory on the other, as well as a civic centre and a train station. The avenues are surrounded by gardens, and lined with symmetrical buildings of classic inspiration.

The city centre is first outlined and subdivided in order to encourage the establishment of businesses in defined locations. It is built following certain guidelines set out by the company. Each building is restricted to either commercial or institutional use. Restrictions are imposed concerning the materials to be used, and the height of buildings. The objective is to manage the downtown’s development and maintain its homogeneity. The company constructs the first two buildings as models in the downtown area: Block A and Block B. Other buildings follow, including the Bank of Montreal, the Royal Bank, the Palace Theatre, the train station and the Tremblay Building.

The development of the downtown area slows down due to the economic crisis of 1929 and, consequently, the slowdown in aluminum production. However, the substantial production of aluminum during the Second World War and the arrival of numerous workers revive the downtown area. The company, through the Urban Planning Commission it creates, modernises certain aspects of Brainerd's plan to meet the changing needs of the time, including automobile traffic.

The Arvida Market is the first example of this change since it is not aligned with the streets, as are the earlier buildings. Subsequently, several plans are produced for the development of the city centre. The filling-in of the gulley that divided the downtown area permits a re-subdividing of the area, resulting in the arrival of large stores, such as the Hudson’s Bay Company in 1953 or the new Steinberg’s in 1957.