A pride for all Manitobans 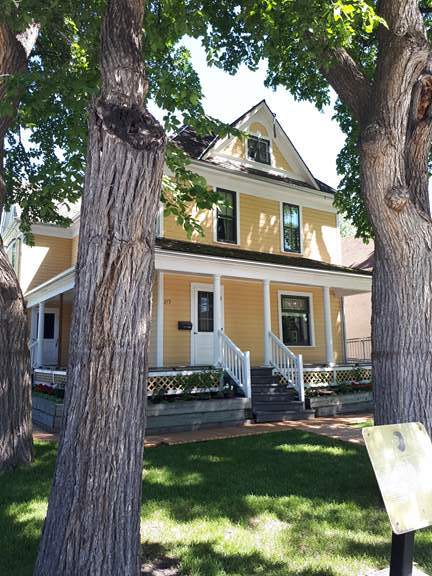 Gabrielle Roy was born on March 22, 1909, in St. Boniface, Manitoba. She lived in the family home located at 375 Deschambault Street until 1937.  The house is located on a street whose name she used as the French title of Rue Deschambault, one of her Manitoba novels (Street of Riches in English translation). Today, it is a museum dedicated to the promotion and the commemoration of the literary contributions of this important Franco-Manitoban writer.

The Maison Gabrielle-Roy is a treasure for all Manitobans, and for all francophones. Tourists from around the world visit the site, including an important number from Québec. Thanks to the unstinting work of Annette Saint-Pierre, who launched and brought to a successful conclusion this important project, this house of great historic and cultural importance is now a priceless element of Manitoba’s heritage resources and brings back to life the memory of the great writer that was Gabrielle Roy.

The House and Deschambault Street, circa 1906 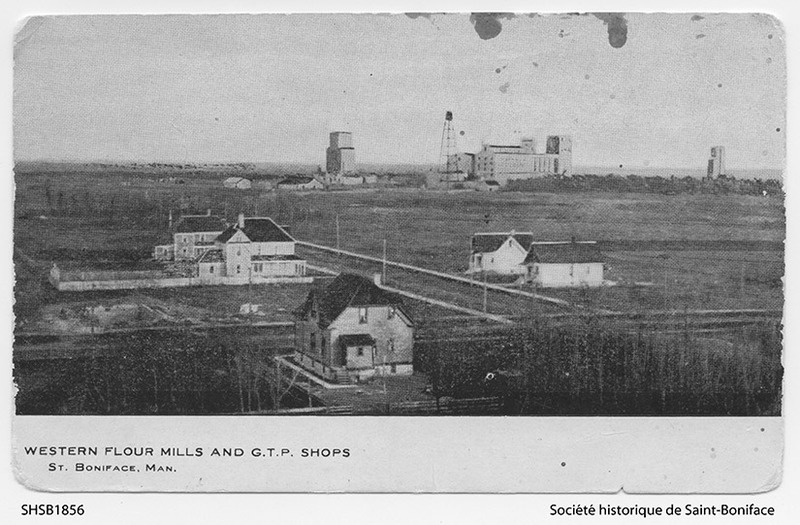 This photograph of St. Boniface taken at the beginning of the 20th century gives a birds-eye view of Gabrielle Roy’s childhood home (second from the left), and Deschambault Street. 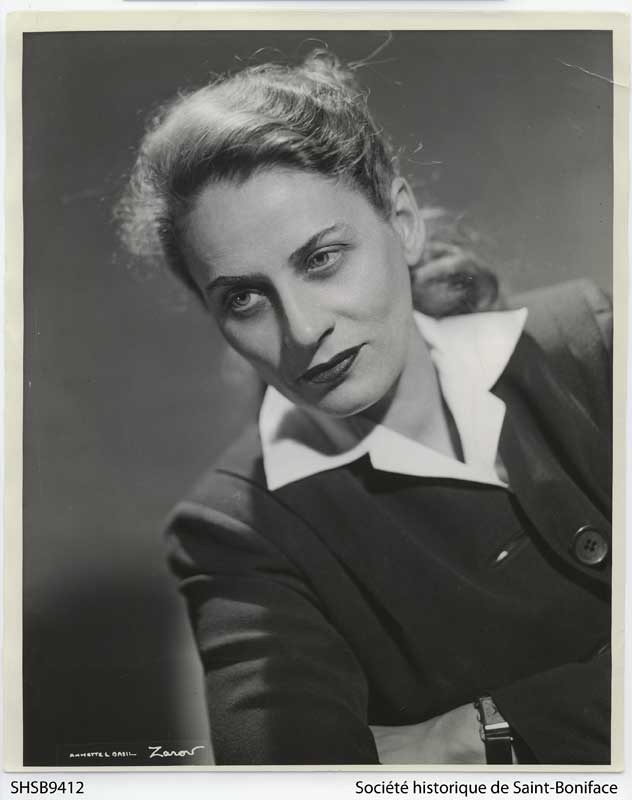 Gabrielle Roy is without a doubt the best-known and most-appreciated Francophone Manitoba author. She has left her mark on the literary world with her honest, complex writing and analysis of the human condition, as well as her mastering of contrasting styles and themes. In fact, her most famous novel, Bonheur d’occasion (The Tin Flute in English translation), published in 1945, illustrates the hardships known during the Second World War in the working class neighbourhood of Saint-Henri in Québec.

Bonheur d’occasion is the first urban novel and the first psychological novel of French Canadian literature, breaking with the period dominated by rural values and the ideology of conservation, and the themes of the return to the land, the importance of the traditional family, religion and community. Her works, numbering over twenty titles, have been translated in more than fourteen languages, and the author received some of the most important honours of the literary world, including the Governor General Award (1947, 1957, 1978), the Prix Duvernay (1956) and the Québec government Prix David (1971). She was made a Companion of the Order of Canada in 1967. 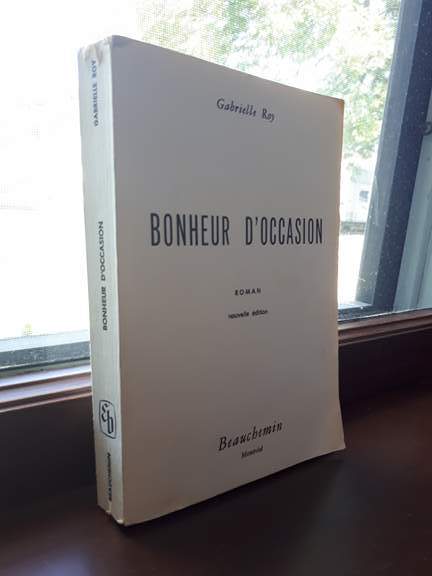 Gabrielle Roy’s career as a writer begins in earnest in 1945 when Bonheur d’occasion (The Tin Flute), her most famous novel, is published. It was an unprecedented literary and commercial success.

She became the first Canadian author to win the Prix Femina, a French literary prize, in 1947. That same year, The Tin Flute, the English translation of the novel, was published. It sold over 700,000 copies. She also became a member of the Royal Society of Canada and she married Dr. Marcel Carbotte. The couple moved to France, where Gabrielle wrote what was her favourite novel, La Petite Poule d’Eau (Where Nests the Waterhen). She came back to Québec in 1950 and lived in the City of Québec. In 1957, she bought a summer home at Petite-Rivière-Saint-François in Charlevoix County, where she wrote most of her works. Amongst the themes developed by Gabrielle Roy, are the psychological and existential angst of 20th century human beings, the living conditions of artists and members of the First Nations, nature, travels, teaching, the difficult adaptation of pioneers in Western Canada and her childhood memories.

She also wrote several stories for children. During her creative periods, she travelled often in Canada, the United States and in Europe. She died on July 13, 1983, of a heart attack, at Hôtel-Dieu de Québec, leaving an important francophone literary heritage in Québec, in Manitoba and everywhere in the world.

In 1983, Bonheur d’occasion was made into a film by Claude Fournier and Marie-Josée Raymond. In 1989, the historic importance of the Roy family home received its first public recognition through the efforts of the Société historique de Saint-Boniface (St. Boniface Historical Society) who erected an historic plaque in front of the house on Deschambault Street. During the 1980s, Annette Saint-Pierre  started planning her project to transform the famous author’s childhood home into a museum. Since Gabrielle Roy was not very receptive to the idea, Annette Saint-Pierre waited until Gabrielle’s death before beginning the necessary work.

Both of Gabrielle Roy’s parents were francophone and French was spoken at home. In fact, both were originally from Québec: Léon Roy was from Saint-Isidore-de-Dorchester et Mélina Landry was from Saint-Alphonse-de-Rodriguez. In those days, St. Boniface was a city separated from Winnipeg by the Red River, wheat fields and a totally different culture. The French language was thus protected. However, the Thornton Act of 1916 forbade all French-language education in Manitoba.  Gabrielle Roy was schooled in English at the Académie Saint-Joseph (St. Joseph Academy) and the Winnipeg Normal Institute. This did not prevent her from winning awards for excellence in both French and English during her high school studies.

In 1913, the Roy family is going through a difficult period. Léon Roy, six months away from retirement, lost his job as an Immigration Agent when the Liberal government was defeated in the federal elections. He did not receive a dime of his pension and had big financial problems. The family home had to be mortgaged in 1915. After his death, Mélina was forced to sell the house and become a simple boarder, in spite of her efforts to earn a bit of money by sewing and renting rooms.

Unlike her older brothers and sisters, Gabrielle never witnessed the happy period of her parents’ life. That is why she had difficulty establishing relationships with them. However, there was a vibrant cultural life at home, and in spite of the financial problems, the family found ways for the children to take piano lessons. The presence of cultural activities everywhere in the home no doubt explains why Gabrielle probably got the writing bug at a very early age.

Following the brilliant success of her studies, Gabrielle devotes her heart and energy to teaching. From 1929 to 1937, she teaches in several Manitoba villages. Her experience as a teacher and the landscapes of her native province stayed forever engraved in her memory and would show up in her works. In 1937, at the age of 28, she leaves for Europe to study acting.

Torn between acting and writing, her lack of success in theatre confirms her choice. In 1939, having moved to Montréal, with the help of her literary advisor, Henri Girard, she becomes a free-lance journalist for several periodicals, including the Bulletin des agriculteurs and La Revue Moderne.

It is said that Gabrielle Roy was a solitary person, reserved, engaging, fragile and nostalgic. She had a particular attachment to her native land, Manitoba. However, in St. Boniface, she experienced feelings of alienation, humiliation and a devaluing of the francophone minority compared to the Anglophone majority. That is why, in spite of being schooled in English, she decided to seek “revenge” by perfecting her French so as to write in Molière’s language, but as a French-Canadian. Today, there are more than 100 different cultural groups in Manitoba and Francophones represent only 7 % of the population.

From 1997 to 2003, thanks to the work done by both the Corporation Gabrielle-Roy and Annette Saint-Pierre to raise funds, purchase the house, restore and transform it into a museum, the dream became a reality. On June 19, 2003, the Maison Gabrielle-Roy museum was officially opened to the public, after many thankless undertakings, and financial investments of over $650,000. It is now an interpretative centre and exhibit hall on the life of the celebrated writer and her family.

The house, built in 1905 by Mélina Roy’s brother, has been restored to its original beauty, even though almost no furniture or artefact came from the Roy family because of the numerous changes of ownership of the house over the years. According to Annette Saint-Pierre, “the house was lifted on piles during the renovation. Everywhere in the house, except in the office, the original floors are still there, made of pine from British Columbia […] The walls are painted in their original colours. Some fifteen coats of paint had to be removed to find the original colour […]. The house’s layout had to be reviewed from top to bottom… all the house’s architectural flourishes were restored to reflect the house as it was in 1905.”

On November 23, 2001, the Manitoba Legislative Assembly gave the Roy House a provincial historic site designation, confirming its importance for the residents of the author’s native land.

In 2009, an exhibit on Gabrielle Roy was presented at the Centre du patrimoine to honour the 100th anniversary of her birth. The exhibit featured resources from the archival collection of the Corporation Maison Gabrielle-Roy. The panels and archival documents used for the exhibit can be seen on this website under the section “Exposition” of the “Au pays de Riel” module.