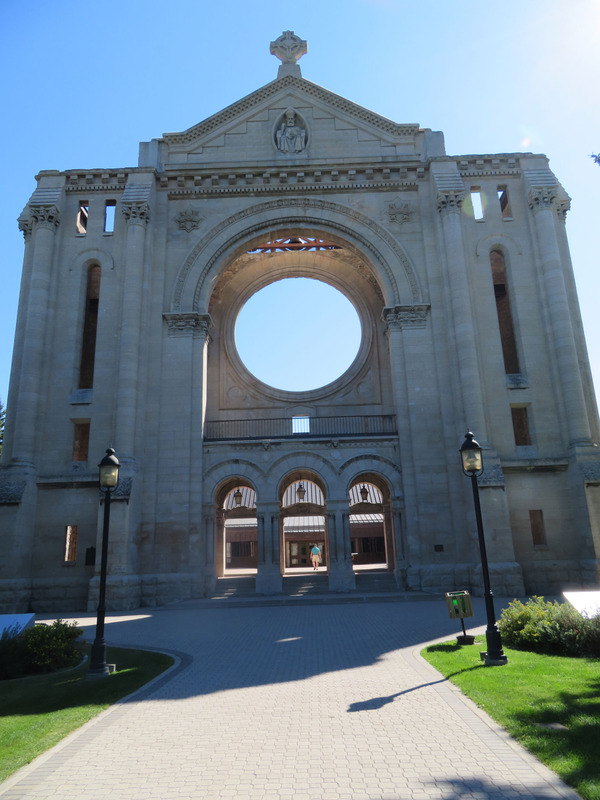 Soon upon his arrival as one of the first Francophone Catholic missionaries at Red River Colony in 1818, Father Provencher built a small chapel for the Catholic parishioners on the eastern bank of the Red River. This building served as a church, a school and the residence of the future bishop of St. Boniface. This little church was rebuilt five times, each time a bit bigger, before becoming today’s Cathedral.

The first chapel was destroyed by flood waters in 1826. Construction of the first church, built of oak logs, had started in 1819, and was not finished until 1825 because of lack of funds.

Construction of a second church, with twin turrets, began in 1832. Although construction was not quite finished, it was blessed in 1839 much to Bishop Provencher’s approval. The bells of this church – it becomes a cathedral in 1847 when Provencher is named bishop of the Diocese of Saint-Boniface – were casted by Mears of Whitechapel Bell Foundry in London, England in 1840. They weighed 1,600 lbs. On December 14, 1860, a terrible fire destroyed the cathedral. Only the bells were saved.

Construction of the second cathedral (the third church), Bishop Taché’s cathedral, started in 1862 and the work is finally completed in 1884. The bells of the old cathedral having been shipped back to England in 1862 to be recasted, were returned and installed in the new cathedral’s belfry. This cathedral was eventually demolished in 1909 after the construction of a third and more spacious cathedral (the 4th chruch - approximately 2,500 places) behind the previous ones.

Photograph of Bishop Provencher’s St. Boniface Cathedral, fall of 1858, and of the Grey Nuns Convent. The photograph is taken from the west bank of the Red River. It was taken by Humphrey Lloyd Hime, a member of the Canadian government’s 1858 Assiniboine and Saskatchewan exploring expedition.

Humphrey Lloyd Hime stayed at The Forks from September 4 to November 30 1858, a layover that allowed him to put his talents as a photographer to use “ ...in executing a number of photographs of scenes, churches, buildings, Indians, etc, which will form an interesting collection”. (Henry Youle Hind, Narrative of the Assiniboine and Saskatchewan Exploring Expeditions of 1858) Hime used the collodion wet plate process of photography. 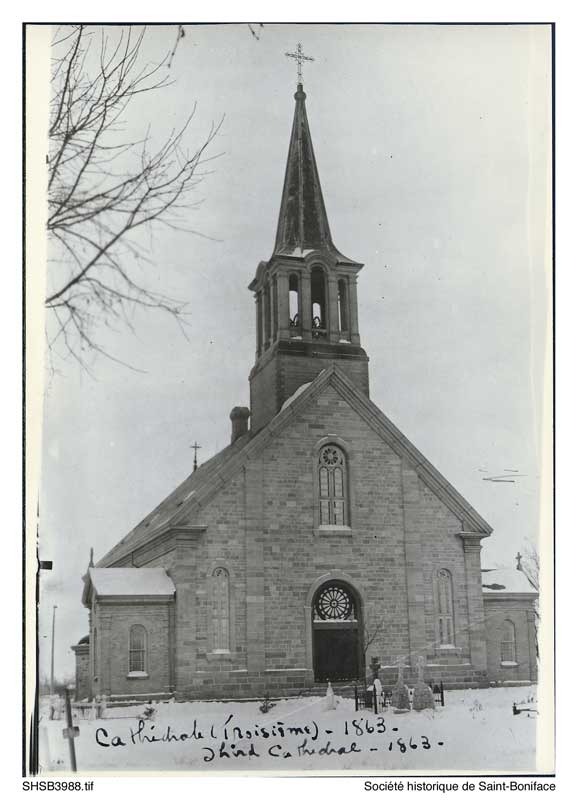 A photograph of the façade of Bishop Taché’s St. Boniface Cathedral in 1863. 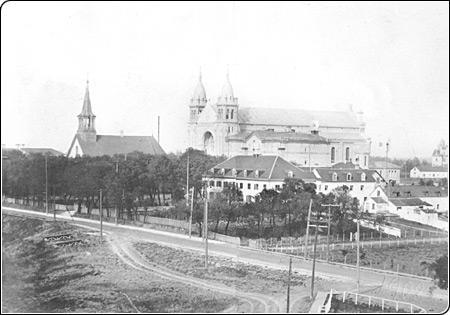 Bishop Taché’s Cathedral (1862), and behind it, Bishop Langevin’s Cathedral (1906). This photo was taken from an upper floor of the St. Boniface Hospital in 1908, just before the old cathedral was demolished in 1909. 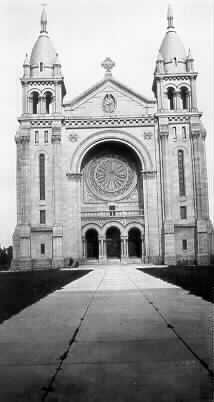 Of French Neo-Romantic style, the third cathedral was built from 1905 to 1908 by Bishop Langevin. A magnificent round leaded window measuring 25 feet in diameter wais located in the centre of the façade under the tip of the roof. The interior of the cathedral had 70 foot-high vaulted ceilings, roman arches and stone columns.

The remains of bishops Provencher, Taché, Langevin, and later Béliveau, as well as others were entombed in the crypt located under the main alter. This cathedral was largely destroyed by fire in 1968. Unfortunately, the bells cast by Mears were destroyed. However, the stone walls and the magnificent façade with its arches, its pillars and the statue of Saint Boniface remained intact and were kept. 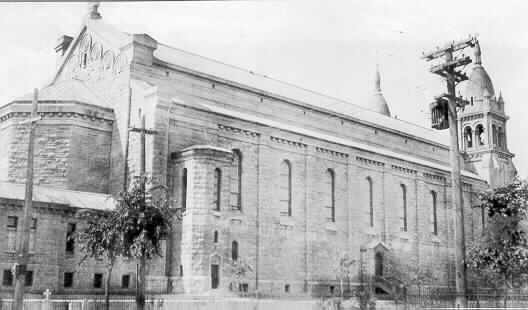 Side view of the Cathedral in June 1918. 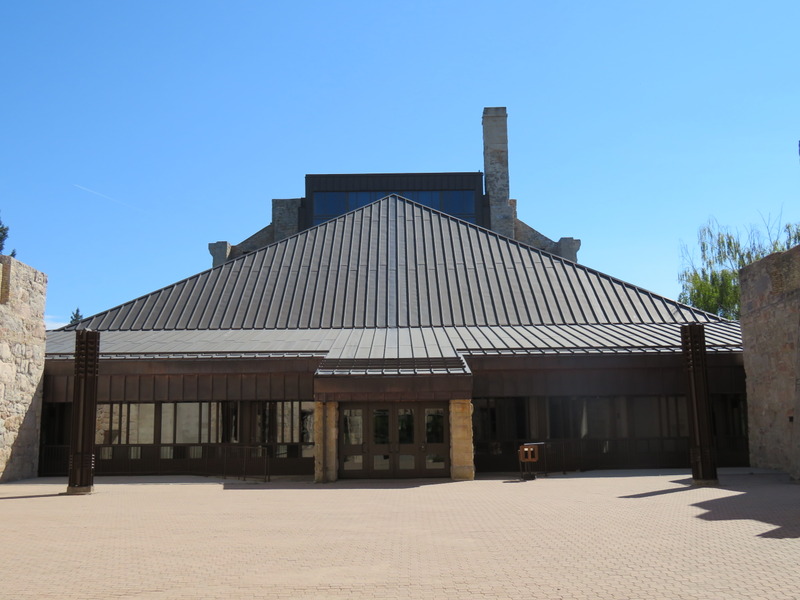 The most recent Basilica, designed by the architect Étienne Gaboury, was built inside the ruins of the old cathedral using the same stone, linking the present to the past. More functional than its predecessor, construction of the new cathedral was completed in 1972. In February 1994, the site of the basilica-cathedral, rich in history, was declared a Provincial Historical Site by the Province of Manitoba.
Get directions
QR code