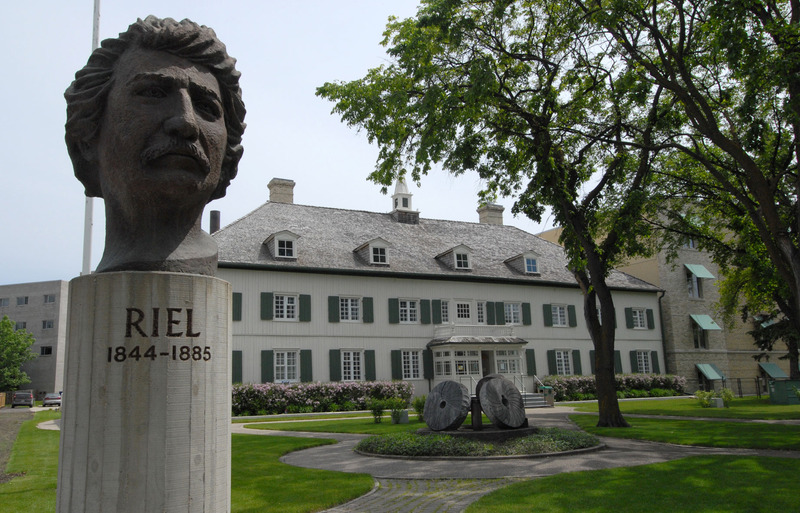 Built between 1846 and 1851, this 4,000 square foot, two and a half storey structure is the largest building of its kind in St. Boniface. Since the beginning, it served as a convent for the Grey Nuns and the first hospital in the North West. The building housed also a school, an orphanage, a seniors’ home, and a school of nursing. After more than one hundred years of uninterrupted use by the Grey Nuns, a museum finally opened its doors in 1967, thanks to the efforts of the Société historique de Saint-Boniface (St. Boniface Historical Society) who wanted to preserve the building from the wrecker’s ball. The St. Boniface Museum received a national historic site designation and is recognized as the largest oak log building in North America. Its numerous glass-pained windows and the two exterior chimneys are other architectural features that characterize the building.

The exterior of the convent illustrates well the mixture of influences of English and French architecture on the Red River Colony society during the mid 1800s. The form, characterised by a symmetrical rectangular layout and a four-sided roof come from the traditional classic English style. This style was used for residences and warehouses built throughout the North West during those years by the Hudson’s Bay Co.

Even though the convent’s layout was of a typical regional type, there were also some strong Franco-Canadian influences, notably in the steep inclined roof, the dormers located in the roof overhangs and the pairs of casement windows and shutters. The convent’s architect, Father Laflèche, modified the classic English layout by adding architectural elements of French inspiration. 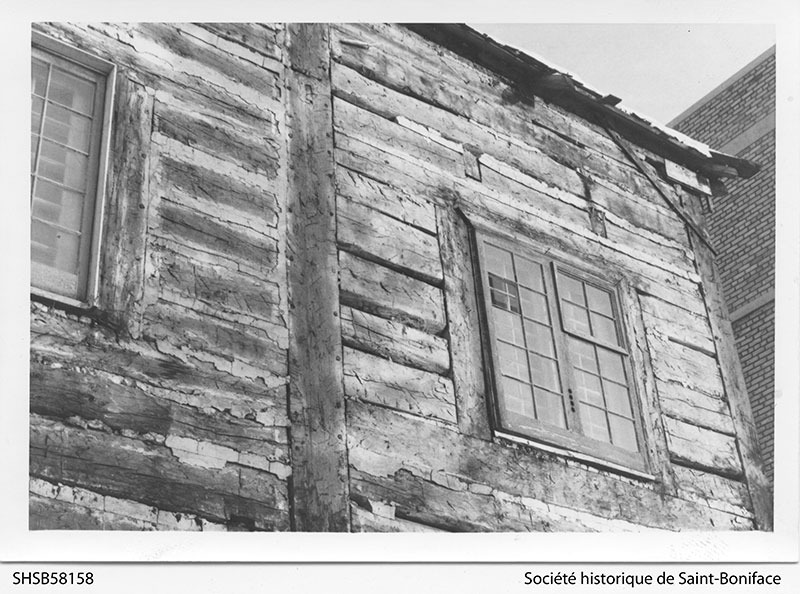 When the Grey Nuns left the convent in 1956, there was talk of demolishing the old structure. The Société historique de Saint-Boniface (St. Boniface Historical Society) undertook to have the convent designated as a national historic site that could then serve as a museum.

In 1958, the objective is reached, and the Historic Sites and Monuments Board of Canada recommended that the building be preserved. Restoration work is undertaken between 1963 and 1967, and the building is stripped down to its original construction. 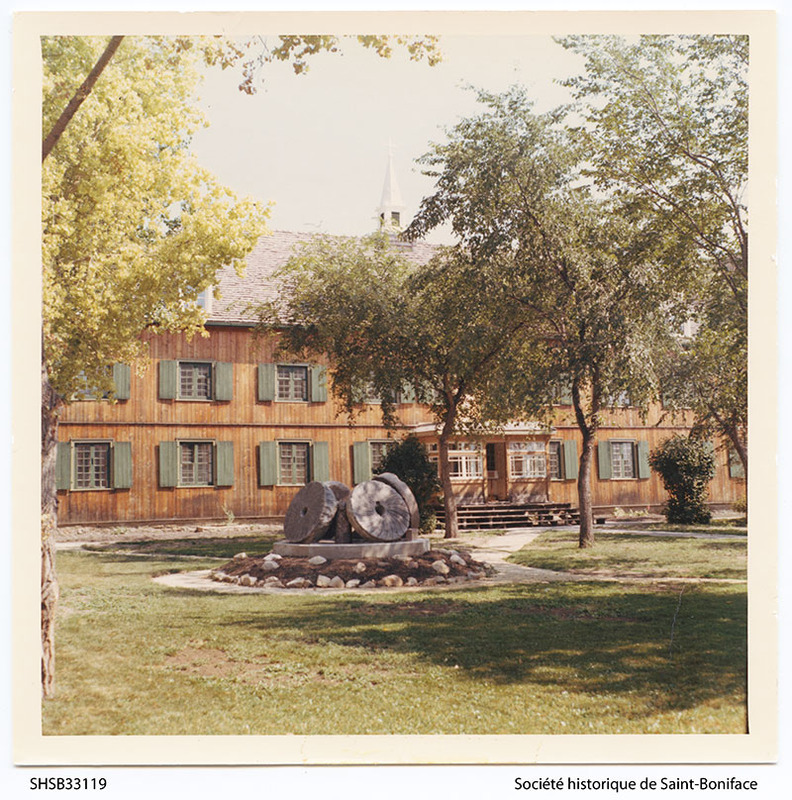 The restoration work completed, the Museum opened its doors during the summer of 1967. 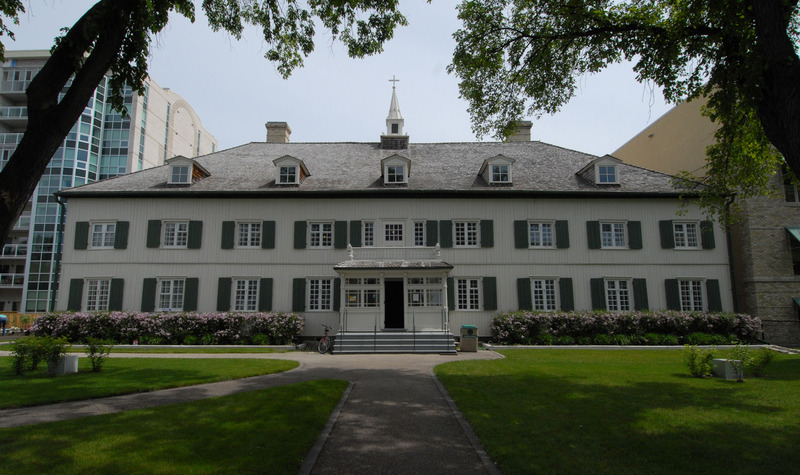 The Museum closed its doors for a second time between 1992 and 1995 for major conservation work required to stabilise the building’s structure and the restoration of the historical construction of the building. Total cost of the project: $1,264,000. 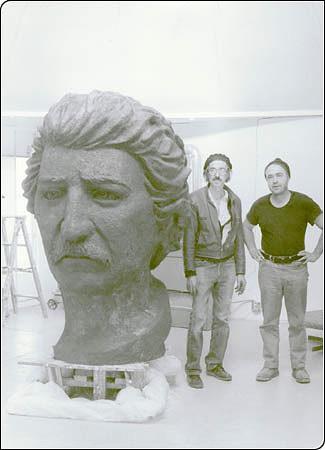 This bust designed by the Franco-Manitoban artist Réal Bérard (on the right) was cast in bronze at William Epp’s (left) studio in Saskatoon. A committee created to commemorate the Centenary of Louis Riel’s death had organised a fund-raising campaign in 1985 to erect a commemorative monument. The monument, located in front of the St. Boniface Museum, was unveiled on October 22, 1989, on the birth date of Louis Riel.

A painter, illustrator, political cartoonist, sculptor, and cartographer, Réal Bérard is one of Francophone Manitoba’s most important visual artists, through the diversity of his works and the scope of his contributions. Since 1982, his political cartoons appear each week under the pen name “Cayouche” in the French-language newspaper La Liberté. In 1990, he illustrated for the National Film Board an animated short film on a song written by Daniel Lavoie. The animated short, Jours de Plaines, was a finalist at the Cannes International Film Festival in France, and presented in Uppsala in Sweden. The film received a Gold Plaque for Animation at the 26th Chicago International Film Festival and the best animation award in Calgary in 1981. Réal Bérard was made a member of the Order of Canada in 2017. 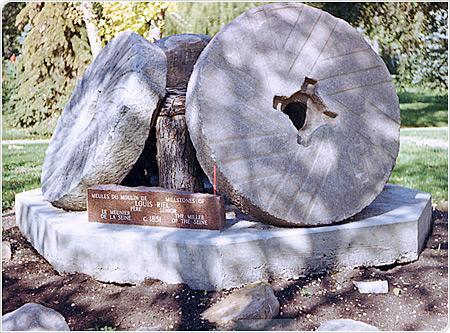 Called the “Miller of the Seine”, Louis Riel, senior, had bought land on the banks of the Seine River, south of where Bishop Grandin Boulevard is located. He built a house and a flourmill for the residents of the Red River Colony. At the end of the 1960s, these millstones were moved to a flowerbed in front of the St. Boniface Museum. 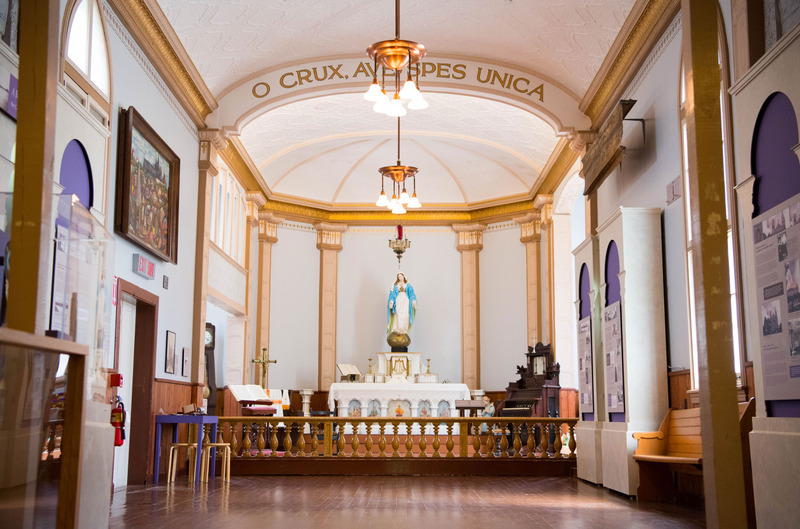 A photograph of the Grey Nuns Chapel where an exhibit on the cathedrals of St. Boniface is located.