The beginnings of local history 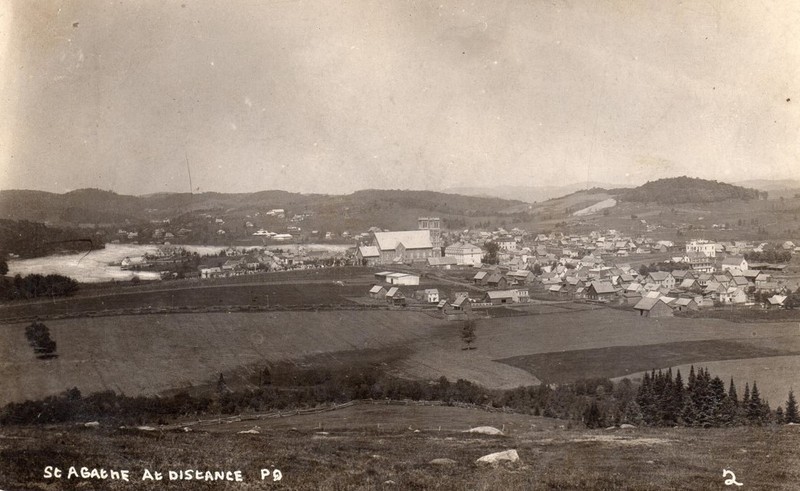 Our story begins about 150 years ago, as colonists began to settle along the Rivière du Nord (North River) valley, arriving at Lac des Sables in the early 1850s.

At the time, the Weskarini (Algonquin) people used the area as their traditional hunting and fishing grounds. The first colonists who followed were farmers and lumberjacks. A hamlet soon took shape near the lake. It was originally served by a mission, until a Catholic chapel was built and the Parish of Sainte-Agathe was founded in 1861.

A mill, erected where the lake discharges into the Rivière du Nord, ground the townspeople’s wheat into flour. Sawmills were also built at various locations, heralding the beginnings of the forestry industry in the region. In those years, the modest village consisted of a number of craftsmen’s workshops and small businesses on Principale and Saint-Vincent streets. In 1892, the arrival of the railroad had a major impact on the development of Sainte-Agathe. 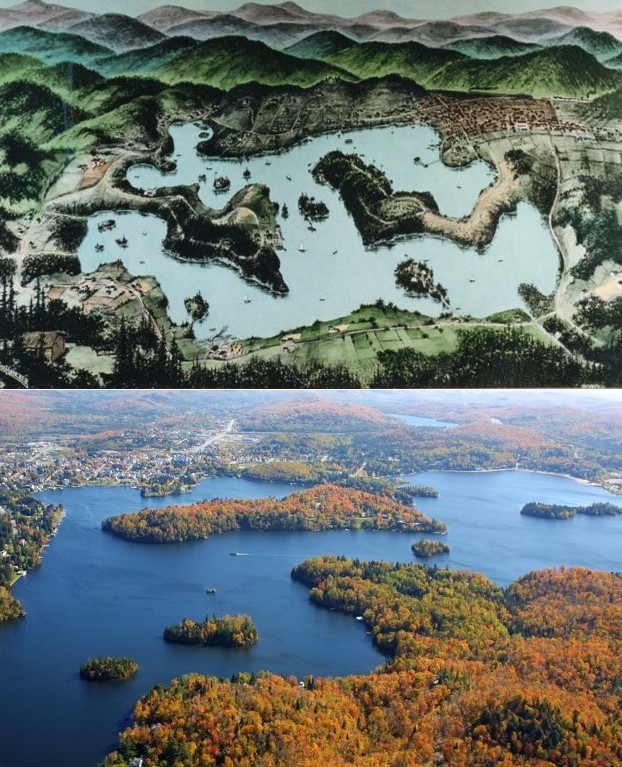 Lac des Sables is, without a doubt, the jewel in the crown of Saint-Agathe-des-Monts’ heritage and a source of pride for its inhabitants. The lake’s name refers to its sandy bottom, which makes the water appear more clear.

It was on its shores that the town was born and grew. The beauty of the lake, the fresh air and the surrounding scenery have drawn cottagers and visitors for more than 125 years. In all seasons, the lake remains the rallying point for many recreational, festive and sporting activities.

There are three public beaches providing access to swimming and water sports. Boating, using all kinds of watercraft, affords panoramic views of the landscape and makes for wonderful change of scenery. 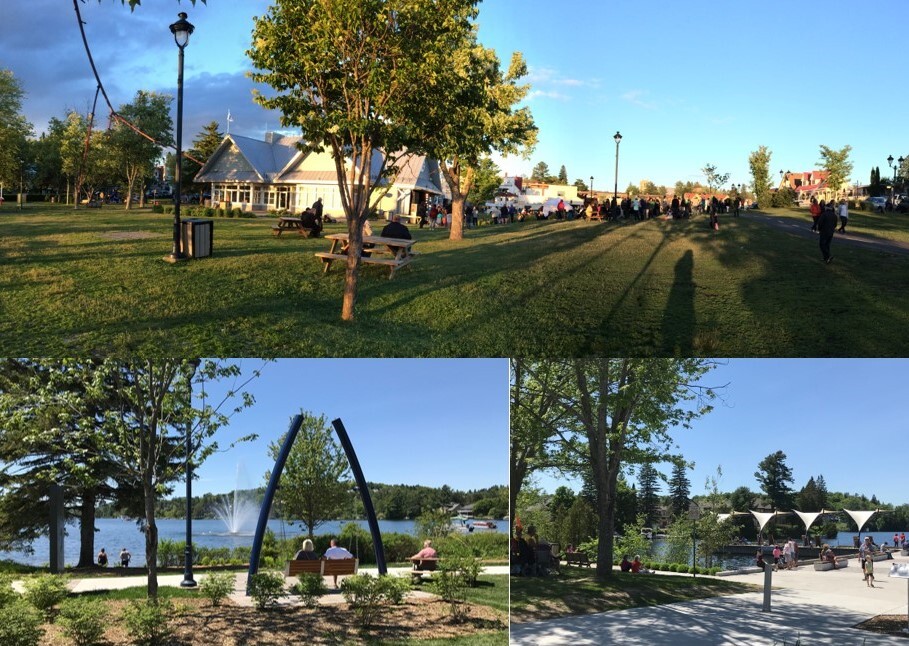 On the shore of Lac des Sables and smack in the middle of downtown, Place Lagny was built in the late 1960s to provide ready access to the lake for both residents and visitors. Under a municipal renovation plan, homes, stores and hotel were demolished to make way for a public space and community pavilion. It’s an ideal venue for public gatherings, open-air performances and family leisure activities of all kinds, perfect for strolling, picnicking, playing, watching the boats or the birds glide back and forth, and admiring sunsets.

Place Lagny takes its name from the 1969 twinning of Sainte-Agathe-des-Monts with the commune of Lagny-sur-Marne, a suburb of Paris, France.

The design of the pavilion inaugurated in 2003 echoes that of the former Chez Maurice Hotel, which stood on the same spot, and was also known at different times as Villa Beaulieu and Villa des Monts.

The Joys of Winter During “Carnaval” 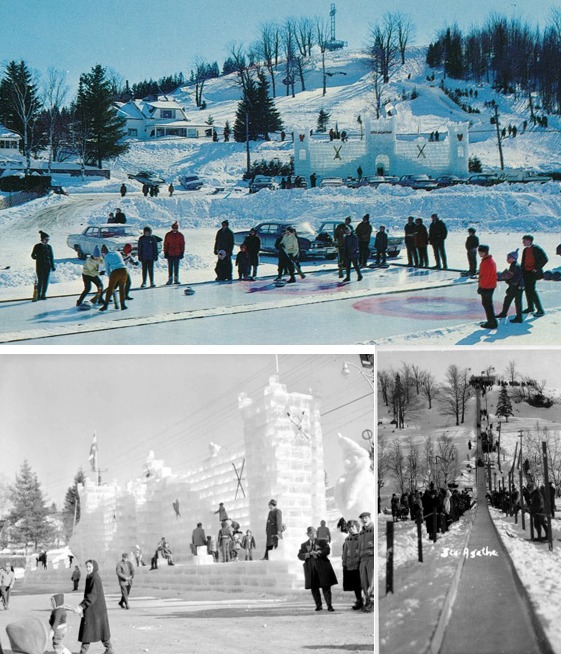 Sainte-Agathe’s first winter carnival is said to have been organized by Omer St-Amour, a pharmacist, in 1908. This festive occasion would be interrupted some years, owing to the two World Wars and the Great Depression, among other events, before being reborn in spectacular style thanks to a flamboyant figure: Adélard Ratelle, nicknamed Monsieur Carnaval. He travelled far and wide, including to the United States, to promote this major tourist event that highlighted not only the town’s attractions, but also French-Canadian traditions like the arrowhead woven sash, old-time meals and dance nights featuring folk music.

The extensive program of activities included an ice castle, ice sculptures, the crowning of the Carnival Queen, a torchlit parade with floats, ski and dogsled races, skijoring, hockey, slides, fireworks, and plenty of evening entertainment in the town’s hotels and parish hall. 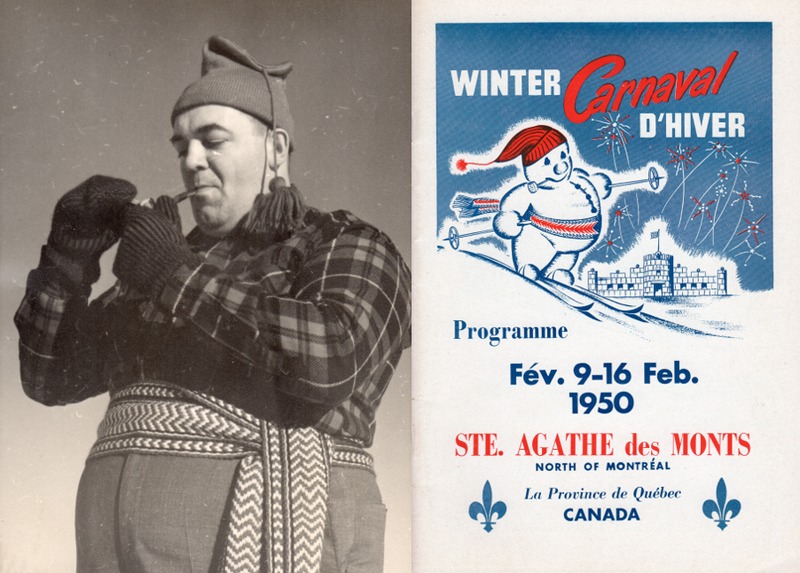 Did you know that the famous Bonhomme Carnaval was born in Sainte-Agathe-des-Monts? It’s a little-known fact, but one that residents are quite proud of. Whereas Quebec City’s Bonhomme dates back to 1954, the Sainte-Agathe carnival mascot appears in advertisements and in the annual program as early as 1950. He was designed by Natt C. Cowan... probably in the image of his spiritual father.

The Laurentian Winter Carnival in Sainte-Agathe-des-Monts would never have enjoyed the success it did without Adélard Ratelle. The man affectionately known as Monsieur Carnaval was the heart and soul of the event. Beginning in 1947, and for 25 years afterward, he was its volunteer chairman and general manager. A seasoned organizer, he built the carnival’s, and the town’s, reputation all over the world. In the 1950s, he orchestrated major advertising campaigns for the carnival, including several in New York City: he even had a load of snow flown to Manhattan to recreate a snowball fight in the middle of the city! Adélard Ratelle left his mark on the history of Sainte-Agathe through his community involvement, dedication, keen sense of organization, and innovative ideas. 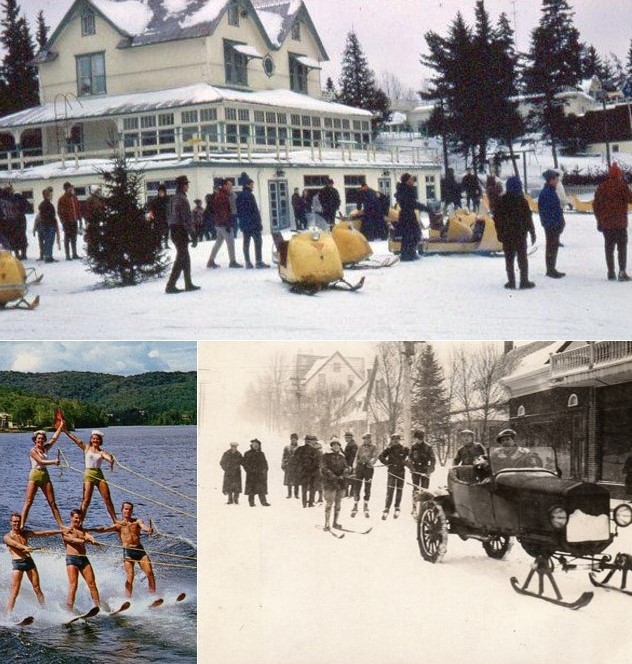 Sainte-Agathe-des-Monts has a long tradition of year-round events and entertainment, varying with the seasons. Boat races were first held on Lac des Sables in the late 1890s. Waterskiing shows were extremely popular in the 1950s and 1960s. More recently, a series of concerts by the lake has become a summer tradition. In the warmer months, residents, tourists and resort guests enjoy fishing, swimming, waterskiing, canoeing, rowboating, sailing, and guided tours aboard the sightseeing vessel Alouette.

In the winter, the fun doesn’t stop - far from it! Besides being the cradle of skiing in the Laurentians, Sainte-Agathe has been a haven for offbeat cold-weather sports since the turn of the 20th century, including skijoring (in which skiers are pulled by a horse, dog or motor vehicle) and “aéroski” (which saw skiers pulled across the frozen lake by a plane with its wings removed), and more traditional pastimes like downhill and cross-country skiing, skating, hockey, curling, ice fishing, and snowmobiling.

PHOTOS
(1) A group of snowmobilers in front of Chez Maurice Hotel.
(2) A waterskiing show on Lac des Sables.
(3) Skijoring.

Where It All Started (reminder) 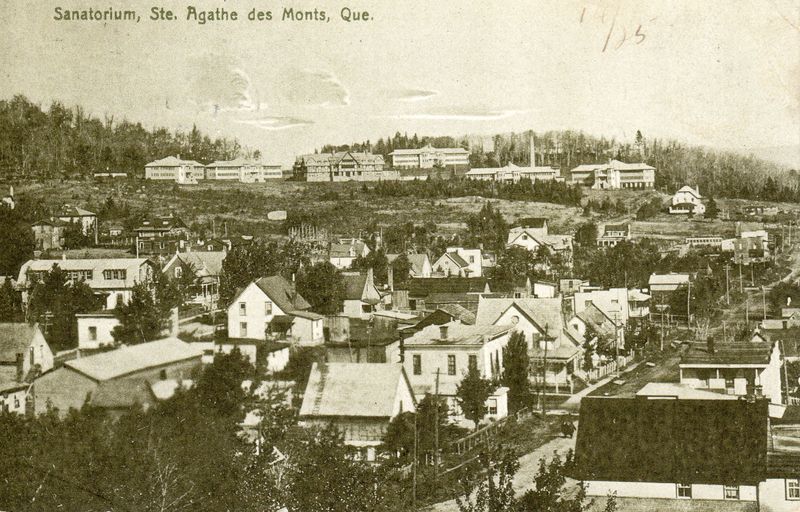 Our story begins about 150 years ago, as colonists settled along the Rivière du Nord valley and arrived at Lac des Sables in the early 1850s.

The Weskarini (Algonquin) people once used the region as their traditional hunting and fishing grounds. The first colonists who followed were farmers and lumberjacks. A hamlet was soon born near the lake. It was originally served by a mission, until a Catholic chapel was built and the Parish of Sainte-Agathe was founded in 1861.

A mill, erected where the lake discharges into the Rivière du Nord (North River), ground wheat into flour for the townspeople. Sawmills were also built at various locations, heralding the beginnings of the forestry industry in the region. The modest village consisted of a number of craftsmen’s workshops and small businesses on Principale and Saint-Vincent streets. In 1892, the arrival of the railroad had a major impact on the development of Sainte-Agathe.

The arrival of the railway (continuation of the story)

Sainte-Agathe-des-Monts experienced significant growth following the arrival of the railway. This has a major impact on the development of the village. Many visitors are delighted by the scenery and the air quality that is sorely lacking in the big city.

Octavien Rolland, a Montreal bookseller, was the first to build a seasonal residence on Lac des Sables. Many others followed suit, among them lawyer and politician Raymond Préfontaine along with industrialists and financiers from Montreal. Their luxurious villas multiplied around the shores of the lake, and hotels sprang up to accommodate short-term holidayers.

During the same period, religious institutions established a convent school and a college for girls and boys, respectively, from the village and the surrounding area. In 1905, the Catholic authorities undertook the construction of a vast stone church to replace the former one, grown too small for the congregation. With more and more English-speaking people settling in the town, Holy Trinity Anglican Church was built on Préfontaine Street in 1899. Thanks in part to upper-class tourism, Sainte-Agathe-des-Monts flourished in an era of prosperity.

Because of the fresh air, the town became famous for the treatment of respiratory illnesses. Sanatoria were built and some private homes added cure porches to accommodate convalescing patients. After World War II and the development and widespread use of a vaccine against tuberculosis, the importance of these health-care establishments waned.

As skiing grew in popularity in the 1920s, Sainte-Agathe-des-Monts’ tourism offering diversified, and the area became a winter-sports destination par excellence. The winter carnival, ski and dogsled racing, along with boat races and waterskiing ensured a steady supply of visitors all year long.

Later, the highway was built and new tourist destinations elsewhere in the Laurentians drained a portion of the clientele from around Lac des Sables. Heirs to more than 150 years of history, the citizens of Sainte-Agathe-des-Monts and vacationers alike are now rediscovering the charms of their built and natural environments.
Get directions
QR code