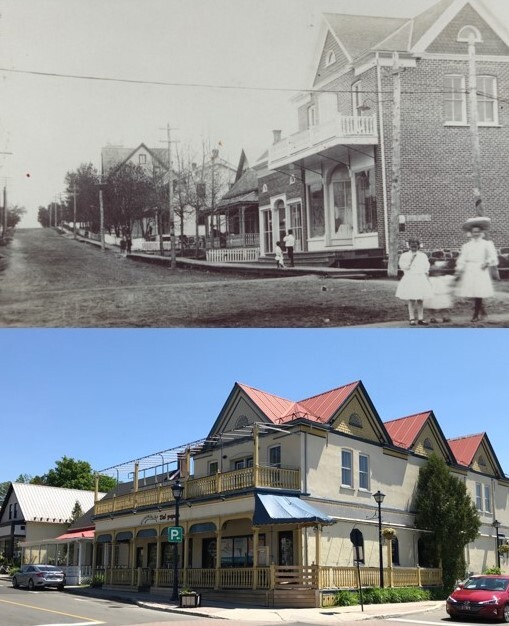 The building in question here, empty and abandoned for years, was demolished in the fall of 2020 due to its advanced state of disrepair. However, its history, intimately linked to the development of the city, remains of some interest.

This imposing two-storey brick building belonged to the Forget family and dates back to 1897. Among the residents of Montreal’s Golden Square Mile, there was a certain prestige in knowing Vincent and Euclide Forget, father and son. They were brilliant promoters, as one can judge by the size of their Sainte-Agathe store (otherwise locally known as “Chez Forget”).

The Queen Anne-inspired architecture, more commonly seen in the villas around the lake, underlined the recreational spirit of this vast community of rich vacationers. Miraculously saved during the great fire of 1907, the building has been renovated many times since. These successive alterations have unfortunately done away with many of its most attractive architectural features, such as the brick cladding and inset doorway.

PHOTOS
(1) The Laurentian Store as it looked at the turn of the 20th century.
(2) The building as it appeared in its last years. 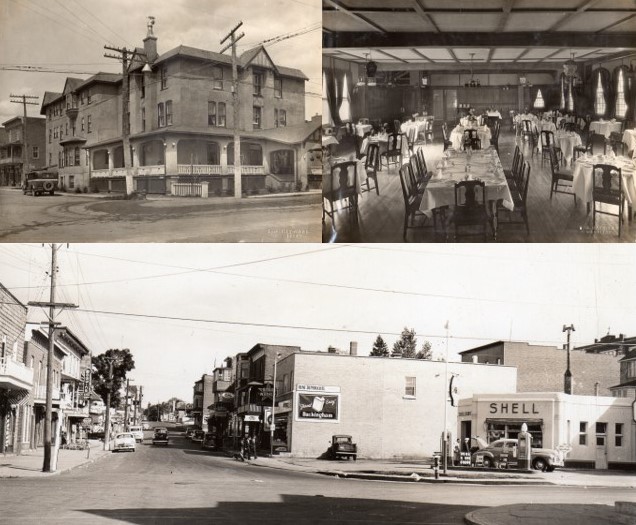 Built in the early 20th century at the corner of Saint-Vincent and Principale streets, the Murray Inn was in its day one of the most well-known hotel properties in Sainte-Agathe-des-Monts. In the late 1920s it was moved to the end of Saint-Vincent Street at Larocque Street, cut into two sections, which were then drawn by horses. Its new lakeside setting only enhanced its charm and, under its new name, the Laurentide Inn*, it became one of the most modern and in-demand places to stay in Sainte-Agathe-des-Monts.

Before 1912, there was no real road suitable for motor vehicles in the Sainte-Agathe area. And it was not until 1920 that the government approved construction of a major highway extending northward to Mont-Laurier. Route 11, as it was originally known, passed through the heart of the village, along Principale Street and then along Saint-Vincent.

At that intersection, Pierre-Émile Lortie’s garage and service station, which opened in 1928, was one of the busiest in the township. Léo Lortie took it over in 1944. Although Route 11 was rerouted in 1955 (and became the 117 in the 1970s), the business remained a going concern, run by Léo’s son Guy, among others, until around the turn of the 21st century.

After standing vacant for a number of years, the property was converted into a public rest area with the current owner’s consent and collaboration, and may be repurposed as a retail space.

* See picture further down at ''The Golden Age of Hotel Tourism'' page.

PHOTOS
(1) (2) Exterior and interior of the Murray Inn at its original location.
(3) The Lortie garage and service station around 1950. 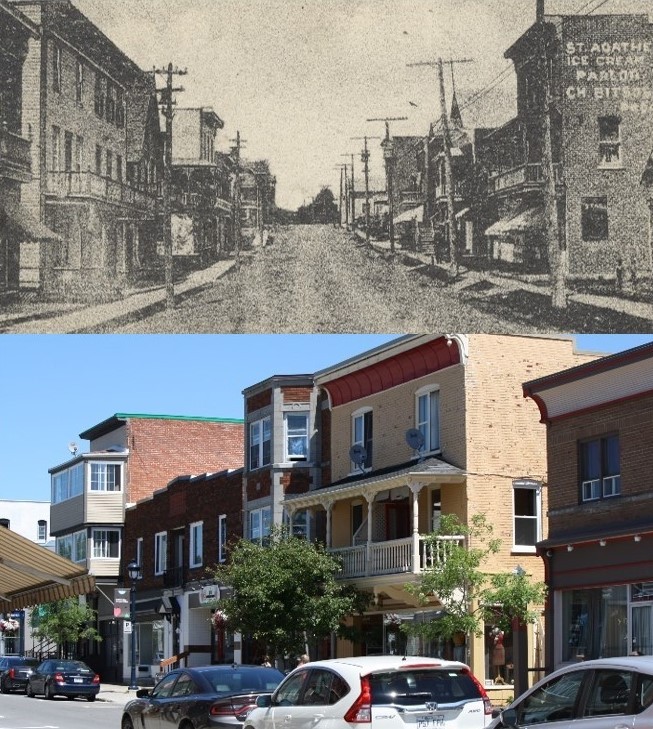 37–39 Saint-Vincent Street
……….
Joseph Doré, a cabinetmaker, bought part of the site of the former Belmont Hotel in 1913 (later rebuilt on Principale Street) and put up a three-storey commercial brick building there. The upper floors were used for living quarters.

The building displays Italianate architectural elements, a form that was popular during that period on both Saint-Vincent and Principale Streets. Probably as a result of the great fire of 1907, brick was often used for building. The covered gallery on the second floor provided the owner with a protected exterior space. The arched cornice that crowns the façade is a regional characteristic.

Restaurateur Charles Bitsos had his Ice Cream Parlor here in the 1920s. Many other retailers occupied the ground-floor space over the years. The building was eventually renovated to highlight many of its heritage architectural details. Today, it houses a trendy second-hand clothing store. 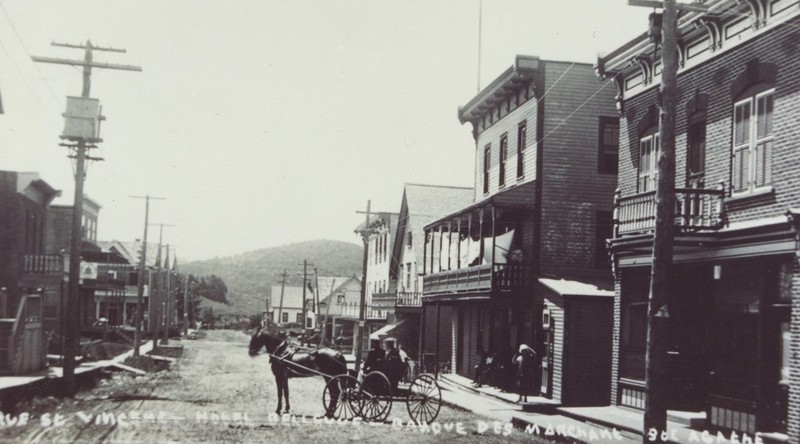 Not long after 1895, an innkeeper named Isaac Guindon set about building the Bellevue Hotel, a three-storey structure decorated in the Italianate style, which was a popular choice for commercial buildings at the time. Joseph Forget bought the Bellevue in 1905, but two years later the building suffered extensive damage in the fire that raged along Saint-Vincent Street.

Restored with respect for the original architecture, the hotel was subsequently sold to William Morin in 1920, who tended his establishment, the Morin Hotel, for more than 20 years. The Belson family then transformed the building, also known at one time as the Lac des Sables Hotel and the Auberge Française, into a restaurant.

For 30 years starting in the 1950s, the Laurentian Restaurant was the gathering place of choice for the English-speaking and Jewish communities and, eventually, for local youngsters. Renovations in 1990 restored part of the original galleries and ornamentation.

PHOTO
Saint-Vincent Street around 1920. The Bellevue Hotel is, on the right hand side with the large covered balcony

The Golden Age of Hotel Tourism 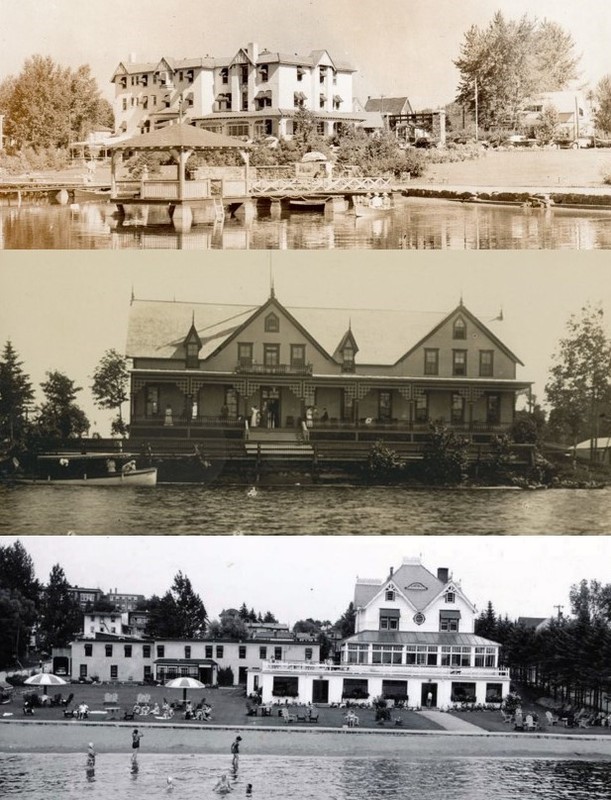 When the railroad arrived in Sainte-Agathe in 1892, the town gradually came into its own as the tourism capital of the Laurentians. Luxury hotels, inns and rooming houses sprang up in the first half of the 20th century. Some residents of Saint-Agathe would even live in their kitchens during the summer months so they could rent parts of their homes out to seasonal visitors.

Tourism reached its peak from the 1940s to the 1960s as roads to Montreal were improved and the automobile became people’s preferred way of getting around. English-speaking and Jewish cottagers from the big city grew particularly fond of Sainte-Agathe, and the local hospitality industry tailored its services to them. Merchants did a booming business.

The town’s heyday as an upper-class tourist destination came to an end in the 1970s, though, with growing competition from surrounding municipalities. The hotels gradually disappeared: some burned down; others were torn down. Today, however, with a revitalization of leisure infrastructure and activities, and the showcasing of built and landscape heritage elements, the industry is getting a new lease on life.

PHOTOS
(1) The Laurentide Inn at the end of Saint-Vincent Street, on Nantel Bay (formerly the Murray Inn).
(2) The Castel des Monts on the peninsula of the same name, opposite the town dock.
(3) Chez Maurice Hotel, on the site of present-day Place Lagny.

The Great Fire on Saint-Vincent Street 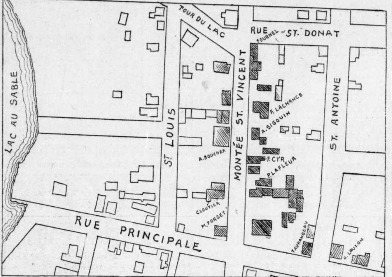 On June 12, 1907, Sainte-Agathe narrowly avoided disaster. Mid-afternoon, the gas stove in Joseph Saint-Louis’ barbershop exploded. Within minutes, his home was a raging inferno, and the flames quickly spread to the neighbouring wooden buildings.

Had it not been for the heroic efforts of the town’s volunteer firefighters, and reinforcements who arrived from Saint-Jérôme within 53 minutes aboard a special train, the damage would have been far worse. At first, it was feared that the homes on Principale Street as well as the Catholic church, only just built, would go up in flames as well. In the end, the losses amounted to about $100,000, with 13 houses destroyed and another 12 damaged. But many businesses were lost in the blaze, as Saint-Vincent street was already a major commercial artery at the time.