Stories on the Way Back 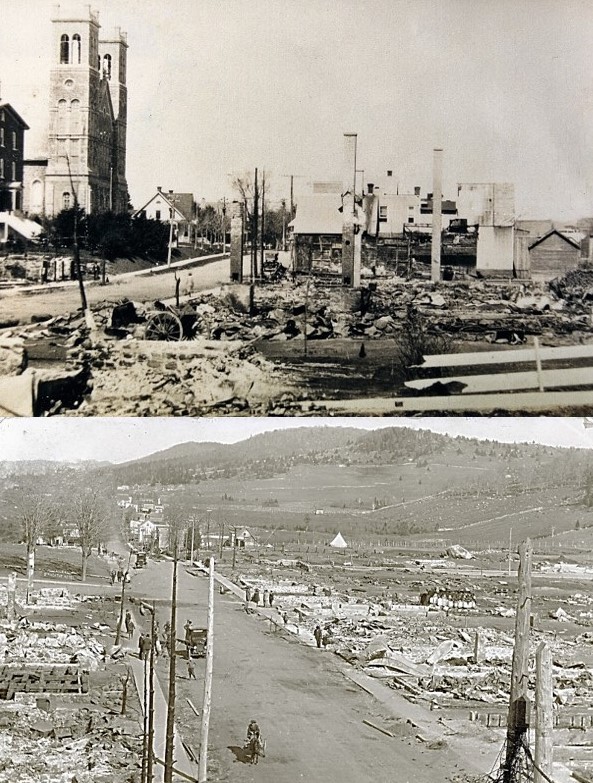 On May 26, 1923, a large part of the town was destroyed by a terrible fire. Principale Street was hardest hit, with nearly 80 families left homeless. Houses, shops, barns, sheds and other outbuildings - some 150 structures in all - were reduced to ashes. Luckily, there was no loss of human life.

It was feared that the Filles de la Sagesse convent and the Catholic church might be lost as well, but the blaze was brought under control just in time. For the second time in less than 20 years, Sainte-Agathe had been ravaged by a major, destructive fire. As a result, most of the replacement buildings on Principale Street were clad in brick. 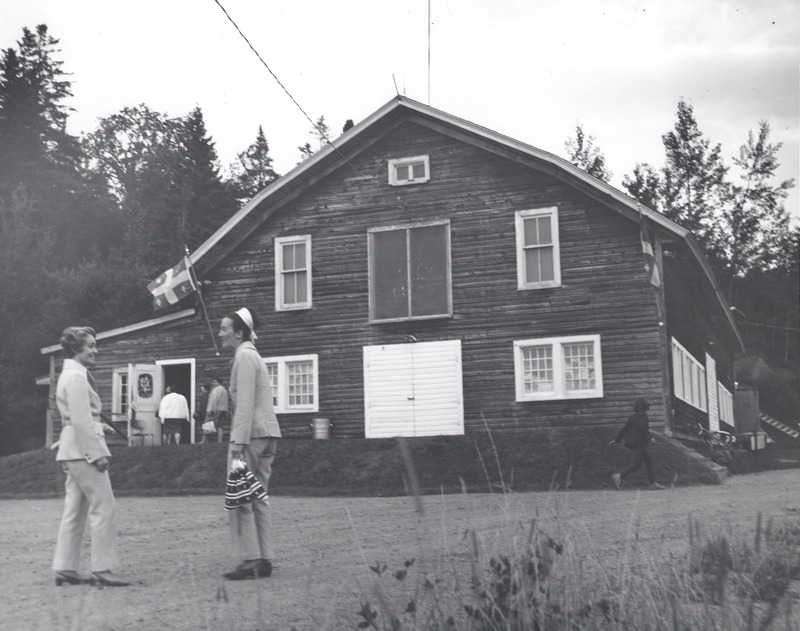 Down through the years, the town has been the site of boat races and acrobatic water-skiing shows on Lac des Sables, Saint-Jean-Baptiste Day parades and the winter carnival featuring the drum and bugle corps of the Frères du Sacré-Cœur and their students, shows by Maurice Langlais’ Harmonie musicale, and plays put on in small halls converted into theatres for the occasion.

By the 1960s, with a burgeoning arts and culture scene, performing arts venues were springing up all over Quebec, and Sainte-Agathe was no exception.

In 1964, the town had assumed ownership of a large lot and a number of buildings that had belonged to the Missionary Oblates of Mary Immaculate, and it decided to convert an old barn there into a concert hall. In 1967, the Théâtre de la Sablière began hosting a program geared toward singer-songwriters and theatre. Gilles Vigneault was the first performer to tread the boards there. In 1968, it hosted the premiere of Réjean Ducharme’s “Le Cid maghané”.

Three years later, Percival Bloomfield and Yves Blais, the founder of the Patriote theatre in Montreal, took over the venue, renaming it the Patriote de Sainte-Agathe. Over the years, it has become a must stop for the biggest names in “chanson”, comedy and theatre, and a symbol of Québécois arts and culture. Since 2011, it has been run by a non-profit organization made up of members of the Sainte-Agathe community.

In 2017, the Patriot celebrated its 50th anniversary announcing at the same time major renovation and expansion work that began in the fall of 2019.  It is scheduled to reopen end of summer of 2021.

All those years, the Patriote has mounted productions adapted to evolving trends and tastes, and continues to present professional productions for growing audiences, while making room for many local talents.

Major renovation and expansion work was undertaken during the fall of 2019. The reopening is expected before the 2020 Winter Holiday season.

*The tour around the lake suggested at Point 4 will take you to the Theatre. 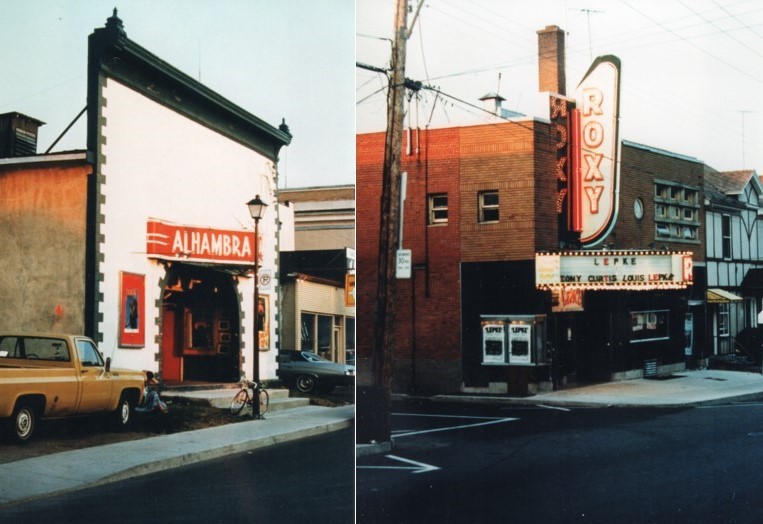 Sainte-Agathe was one of the first cities north of Saint-Jérôme to open a venue purposely built for showing movies. The large numbers of wealthy tourists around 1910 surely provided the impetus for the building of the Alhambra Theatre, on Saint-Vincent Street.

The main attraction was “moving pictures,” as the novelty was known at the time, with a pianist accompanying the silent images. Plays, musical revues and other evening entertainment were on the program as well. When “talkies” (films with sound) arrived around 1930, they were screened in both French and English for residents and cottagers.

After the devastating fire of 1923 on Principale Street, new stores and other commercial establishments were built, including a second movie theatre: the Roxy. The two buildings eventually fell into disrepair, and with declining tourism, the venues ceased operating as cinemas in the 1980s.

PHOTOS
(1) The building that housed the Alhambra Theatre on Saint-Vincent Street, a few steps away from the original post office, is now known as the Promenade Alhambra, and comprises several retail premises.
(2) The Roxy Theatre building, on Principale Street at Hôtel-de-Ville, has also undergone many successive renovations to convert it into retail spaces. 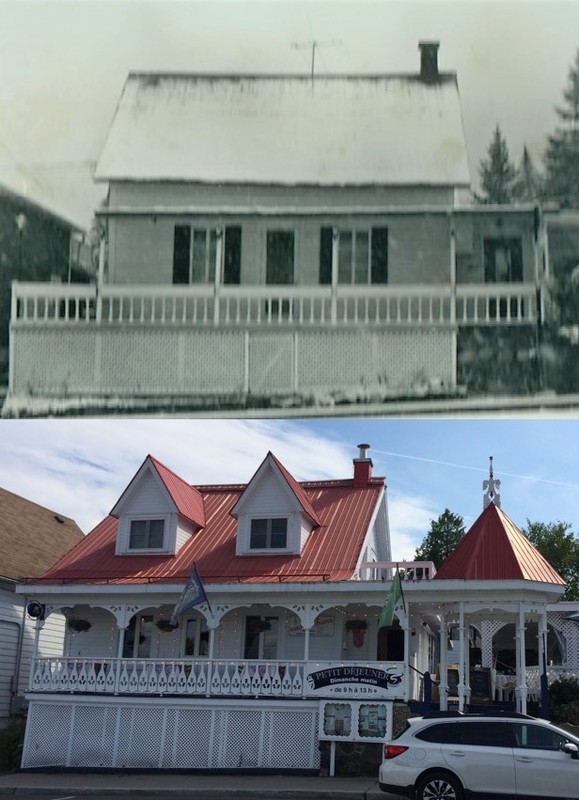 This wooden house was built in 1895 by farmer Évariste Chénier. Having given his land to their son Alexis, Évariste and his wife moved closer to the village and the church.

Joseph Girard, a cook at the nearby Chez Maurice Hotel, later lived in the house, and in 1955 founded the Pension Girard rooming house there.

It is one of the last surviving 19th-century heritage buildings near Place Lagny, with architecture recalling elements of the everyday homes of Sainte-Agathe-des-Monts. The porch was not part of the original building but was added later, so residents could enjoy the peaceful summer weather. Today, the building houses a restaurant. 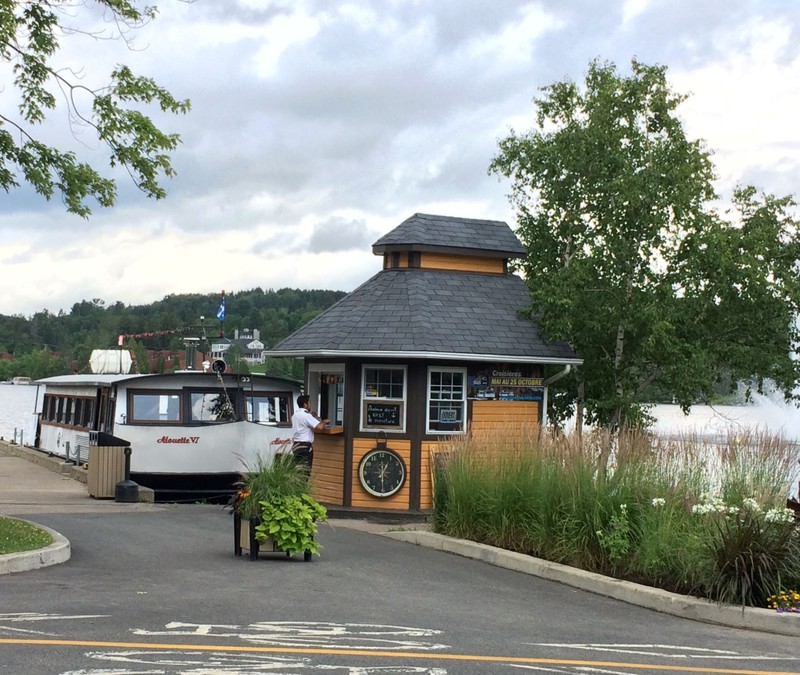 The town dock stands at the end of Principale Street, adjacent to Place Lagny. Tourists from all over the world gather at this meeting point to board the sightseeing boat Alouette and enjoy views of Lac de Sables and its surroundings that they wouldn’t see from the road. Nestled in unspoiled natural vistas are beautiful homes whose history melds with that of the town.

There is still plenty to learn about the heritage and history of Sainte-Agathe-des-Monts! If you haven’t already done so, continue your tour by visiting points 11 and 12 (the Sanatorium and Train Station) by bike or car, or take the heritage tour of the lake (see Point 4), which you’ll find just as enriching.

Sainte-Agathe-des-Monts is just waiting to become your destination of choice!