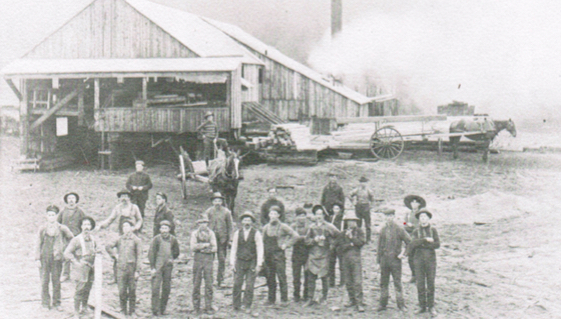 The village of Lac-des-Seize-Îles owes its beginning to the arrival of the Montfort Colonization Railway in 1897. That year, pioneers hailing from Roxton Falls and Saint-Joachim-de-Shefford came to settle in a new land. The first Catholic church, with a school upstairs, was built in 1901 on land donated by Joseph Rodger. At the time, a teacher earned ten dollars per month, less than a servant who, in addition to room and board, earned fifteen dollars per month. 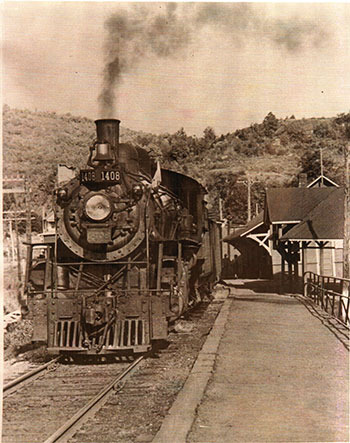 Despite the village’s name for over a century, the lake actually houses eighteen islands. Two islands were considered to be too small for habitation, so they weren’t included in the tally. The names of the sixteen islands are as follows:

East view of the village 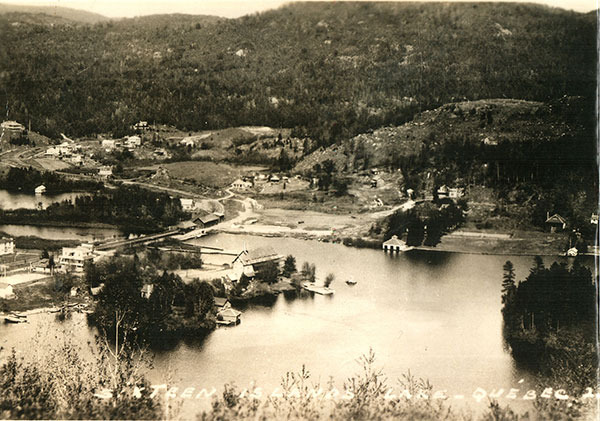 Lac-des-Seize-Îles residents earned their livelihood thanks to the railroad, forestry and tourism. Wood from the Rodger sawmill (1897) and Duncan sawmill (1910) was used to build houses and cottages, or was shipped to Montreal. Oak was sent to England to build ships for Queen Victoria.

West view of the village 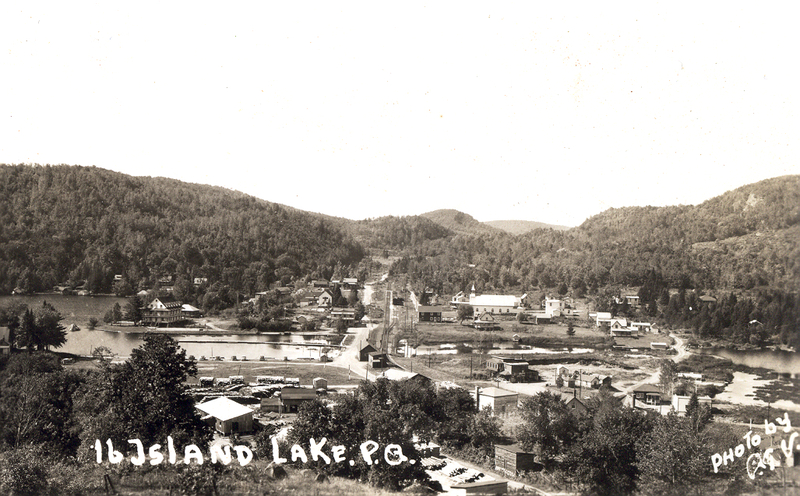 At the turn of the century, the area’s lakes and rivers teemed with local villagers either fishing or engaging in watersports. The Sixteen Islands Lake Fishing Club, still active to this day, was founded in 1907. The village was home to a number of boarding houses and hotels, such as Joseph Rodger’s Manor House, home to chef Mella’s renowned cuisine, and the Lac-des-Seize-Îles Hotel, where the liquor permit – the only in the municipality – made it a social hotspot right up until the 1970s.

Bathers at the Manor House beach 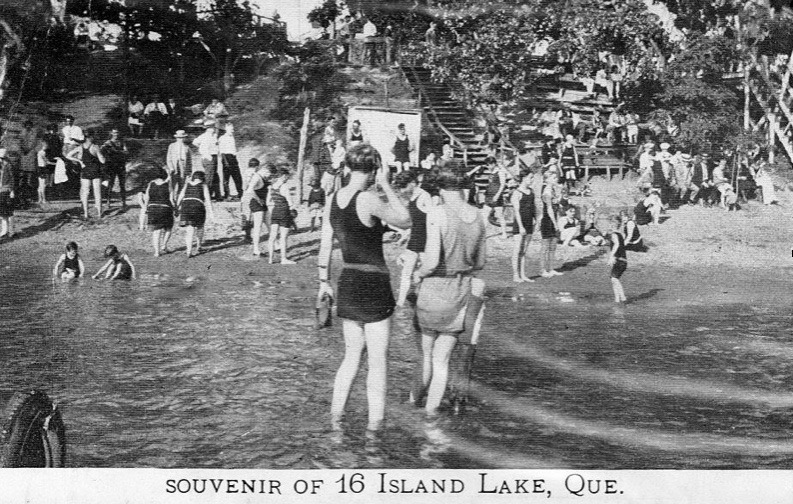 For many at this time, the train was the only contact with the outside world as it brought travellers, mail, freight and information to the village. At the beginning of the 20th century, Joseph Brunet, former president and founder of the Montfort Colonization Railway (1890 – 1989) and federal Member of Parliament, donated the pavilion in his name to the village. His former summer house still stands on Lapierre Street.

View of the village from the mountains 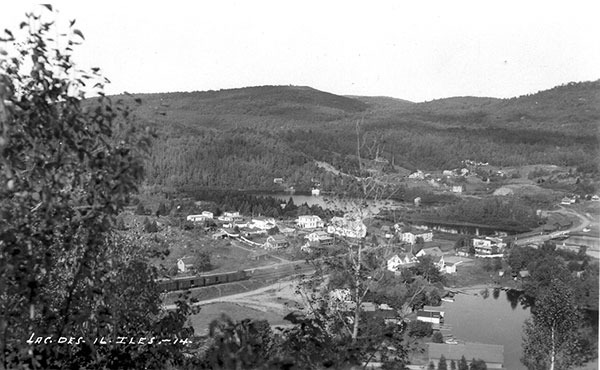 Following the Second World War, tourism made up for the decline in agriculture and the over-exploitation of the forest. Changing tourist habits arising from the development and expansion of a road network and the dismantling of the railway (1962) led to the closure and demolition of many hotels.

View of the village from the Brunet family wharf 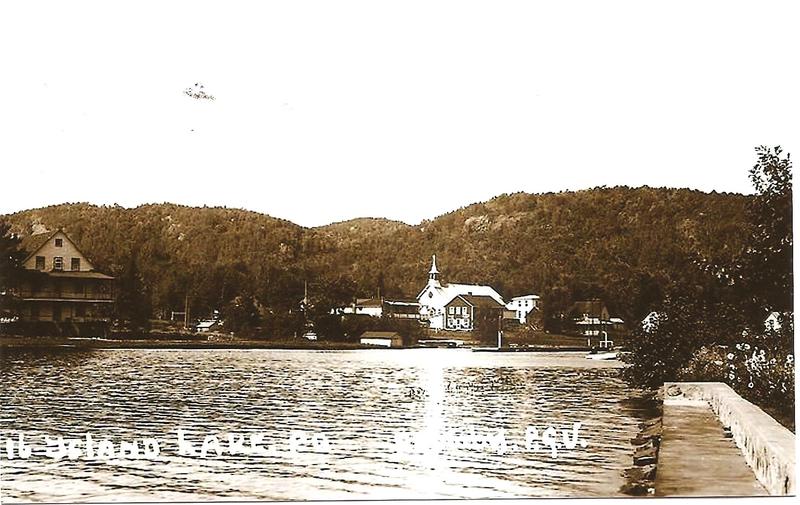 The changing landscape consequently ushered in a new era for Lac-des-Seize-Îles. Enacted in 1885, the Quebec Game and Fishing Act served to enforce rules surrounding the protection of game and fish, while assuring state revenue through the rental of land to private organizations. Consequently, large tracts of land and their resources were sold to a select, mostly American, elite.

In 1960, 2 200 private clubs, dozens of which in the Upper Laurentians, held an exclusivity on 78 000 km2 of land in the province. The only way for the general public to access this land was as a guide or as a gamekeeper. Submitting to public demand, the government proceeded to dismantle such private clubs in 1978. In Lac-des-Seize-Îles, the former Manor House boarding house was demolished to make room for a public beach, with access to the lake for residents. 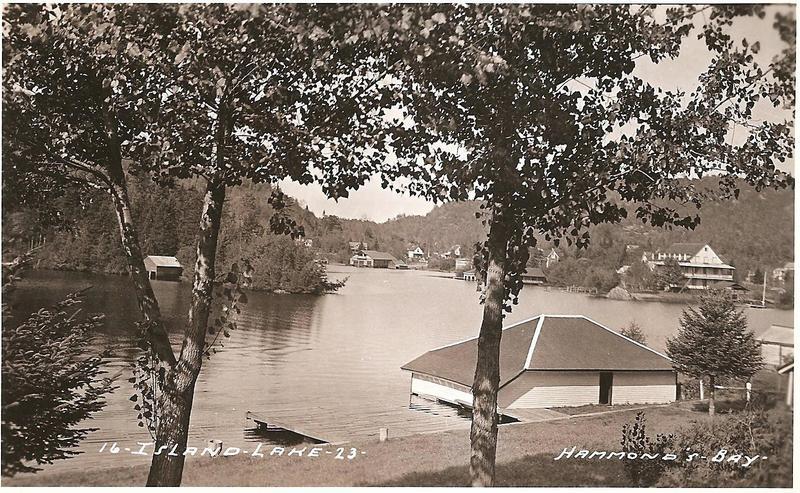 Many cottages were thereafter converted into permanent residences. Work carried out by the Lac-des-Seize-Îles Association, which aims to preserve natural environments from urban development in Laurentian municipalities closest to Montreal, is symbolic of the deep attachment of residents to a certain lifestyle.

As for the Coopérative de solidarité des 4 pôles, the organization promotes recreational and ecotourism development, which includes trails and a lake shuttle. The Aerobic Corridor, which follows the former Montfort Railway line, offers over 50 kilometres of cycling and skiing trails. The Lac-des-Seize-Îles Fishing Club offers its members a wealth of aquatic activities, including swimming, diving, synchronized swimming and lifeguarding classes, as well as organizing swimming and sailing regattas in the summer.

Arrival of the train at the Lac-des-Seize-Îles 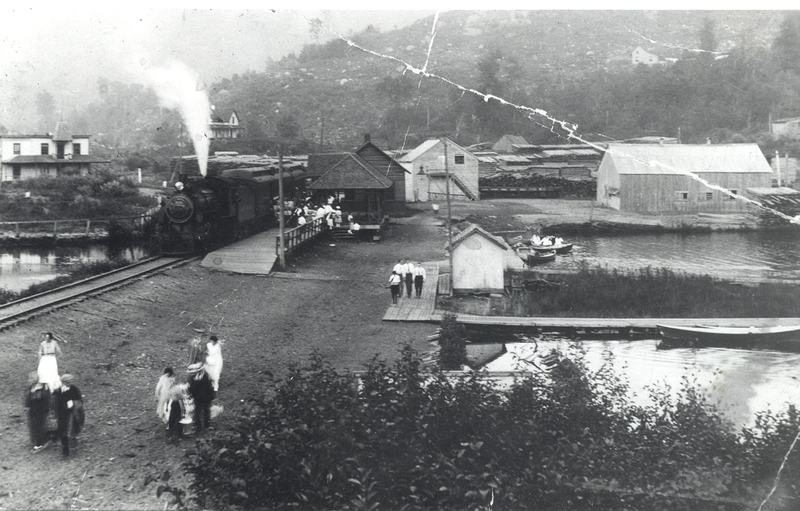 Following representations from a local citizens’ committee in 2011, the former Mayor at the time, Jo Anne Fandrich, in accordance with the municipality and new city council erected the new “Pavillon Brunet” in the village center, the previous one having not survived the disappearance of the railway. In line with the look and dimensions of the former pavilion, the new construction was designed as a place for local residents to meet and for users of the Aerobic Corridor to rest. 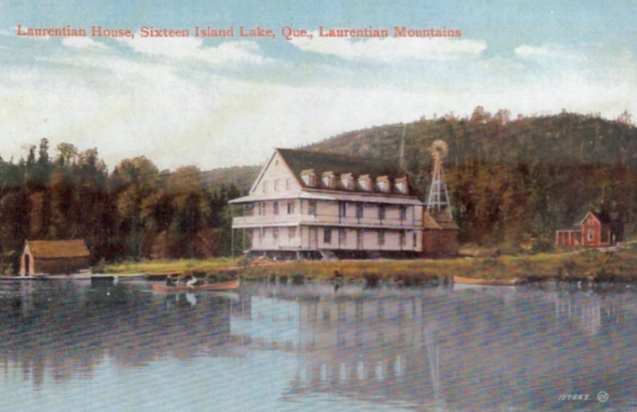 Divers Jean-Louis Courteau and Jacques Lech recently recovered a Huron vase, then a second Saint Lawrence Iroquois vase, from the bottom of the lake, dating back 500 and 700 years respectively. These priceless artefacts offer a new historical foundation of Lac-des-Seize-Îles’ connection with its environment.

Extract of
The Pays-d’en-Haut: a Jewel of Leisure and Recreation