A name reminiscent of the time of Maria Rye

For just over 70 years, orphaned, fugitives and street children from Great Britain were trained here to work as domestic help in homes across the Canada.

Niagara-on-the-Lake played an important role in this practice. Maria Rye operated a facility called Our Western Home on the land where the park is located. 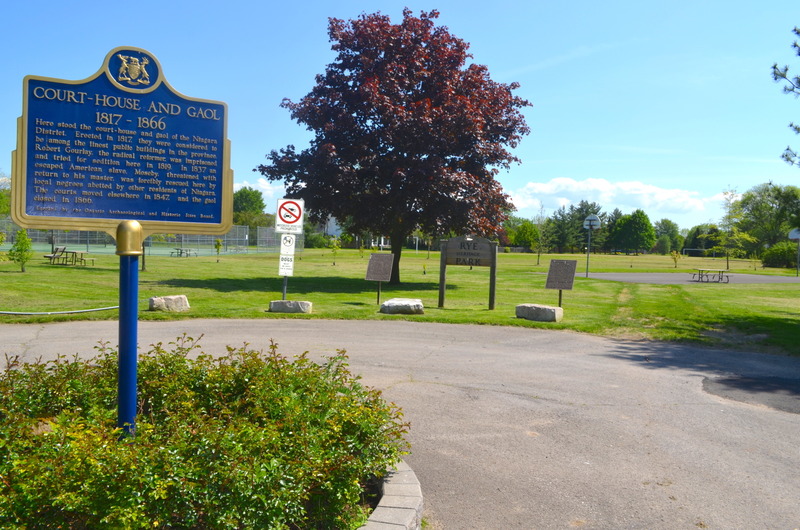 In the spring of 1837, an enslaved African American named Solomon Moseby took his master’s horse and rode away from Kentucky and slavery, to Niagara, where he could be free. Within a few weeks, his new-found freedom was jeopardized.  Moseby was thrust into the center of a dispute that mobilized African Canadians in the Niagara area and beyond and raised the question of whether Canada was truly a safe haven for those fleeing from US slavery.

Four years before Moseby’s arrival, Upper Canada passed the Fugitive Offenders Act which allowed anyone in Upper Canada to be extradited for trial if they were accused of committing a serious crime in another country.

For Moseby, this meant that he would be returned into slavery. African Canadians in Niagara feared the wider implications of this situation as many of them had fled slavery themselves. If Moseby was to be returned to the US for trial for his alleged crimes, then any fugitive living in Canada could be falsely accused and extradited. Inhabitants, both Black and White, in the Town and township of Niagara wrote to the Lieutenant Governor requesting that he not sign the extradition papers.

Numbers vary according to source, but between 200 and 400 African Canadians gathered in protest at the jail. (The resident Black population of Niagara at the time was about 400.) It was a peaceful protest, in which women had a leading role. The initial plan was to raise enough money to cover the cost of the horse and to have the charges against Moseby dropped. But, on September 12, the extradition order came in, soon Moseby was to be handed over to the American authorities.

As the wagon with Solomon Moseby left the jail yard, Herbert Holmes, one of the leaders and a local school teacher, grabbed the reins of one of the horses. Another supporter, Jacob Green pushed a fence rail through the wheel to stop the wagon. Then Sheriff McLeod gave the order to fire. Holmes was shot, and Green was stabbed with a bayonet. Both died from their injuries. Two others were badly wounded. In the brawl, Moseby escaped. Many were arrested, but only six Black men and four white were brought to trial. Most of the male rioters were granted their freedom if they served in the militia, which was being raised to put down the Upper Canada Rebellion.

Solomon Moseby no longer felt safe in Canada, so he went to England, but according to a resident of Niagara, he eventually came back and lived with his wife and St. Catharines and Niagara. The Moseby case drew attention to a major flaw in the 1833 Fugitive Offenders Act: extradition could lead to a punishment in another country that exceeded what they would receive in Canada for the same crime. To this day this case has helped establish Canadian extradition and refugee policies that are still used today.

Before the American Civil War (1861-1865), thousands of people who were enslaved in the southern United States escaped to find freedom. Many came to Canada. Some freedom-seekers were helped by Underground Railroad conductors, but many more found their way to Canada without any help, or with only the chance kindness of strangers they found along the way. Not everyone succeeded in reaching freedom. Nobody knows how many people were captured and taken back to slavery or died on their journey.

Enslaved Africans were very valuable to slaveholders. They were not paid for their work. Men, women and children could be bought and sold like property and separated from their families. Often, they were punished by whipping, or by having a member of their family sold away. When someone ran away, the slaveholder wanted to find them and bring them back, just as they would have for a runaway horse or cow. Slave catchers were bounty hunters who were paid a reward for capturing escaping enslaved people and returning them to those who legally owned them.

In a few instances, a slaveholder would ask the Canadian government to return a refugee to stand trial in the United States, often falsely accusing them of theft, murder or other crimes to make their extradition more likely, as seen in the Solomon Moseby case. 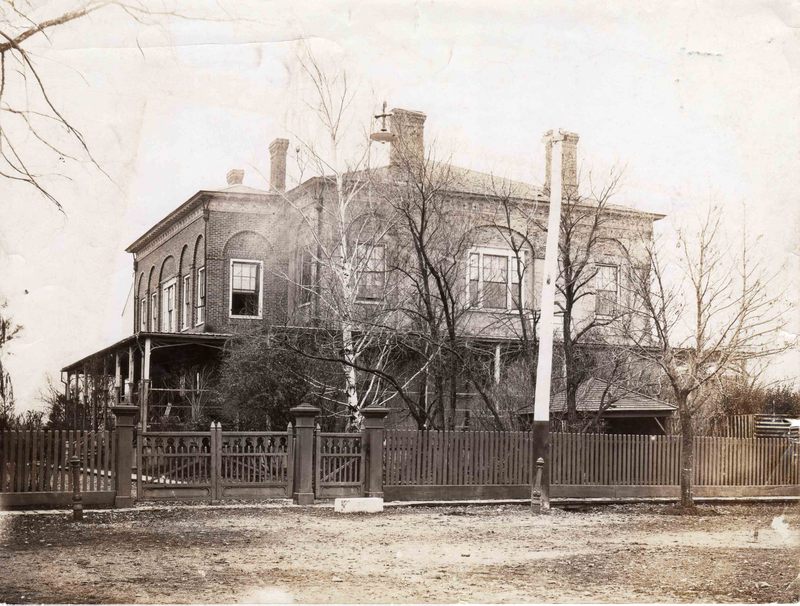 This was once the courthouse and jail for the Town of Niagara-on-the-Lake, and it is the courthouse where Solomon Moseby was taken after his arrest. It is here that members of the Black community gathered in protest and where the riot broke out leading to the escape of Moseby.

In 1869, the courthouse was purchased by Maria Rye and turned into Our Western Home, which housed poor or orphaned immigrant girls from Britain.

The courthouse and Our Western Home no longer stands, but the location is marked by Rye Park and an Ontario Heritage Trust Plaque. 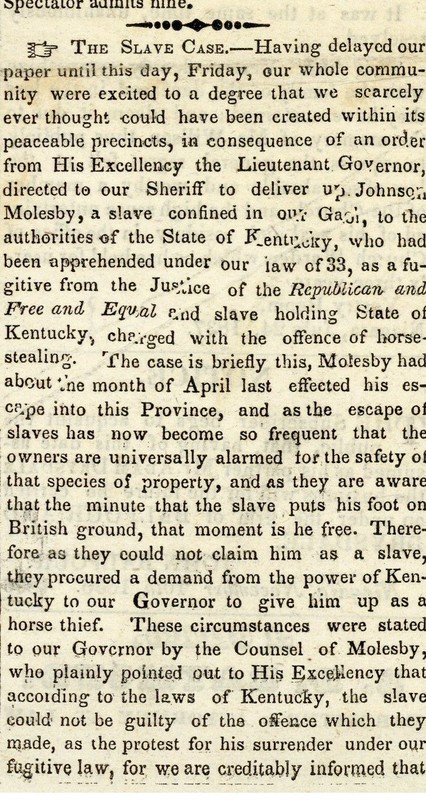 This article was published in the Niagara Reporter on September 14, 1837. The author portrays a detailed and emotional telling of the Solomon Moseby Affair. In the article, the author condemns the Lieutenant Governor of Upper Canada, Sir Francis Bond Head, for allowing Moseby to be extradited back to Kentucky. The firsthand account goes on to describe the mob outside of the courthouse as led by mostly Black women who were not violent. The author portrays a sense of hope when the orders to reconsider the extradition come through, however; a piece is added to the end of the article telling the readers about the violent events that later unfolded. It is declared that the newspaper will no longer comment on the affair as it is too serious a matter that is now in a jury's hands.

This newspaper article shows how the Town was consumed with the Solomon Moseby affair and many were on the side of Moseby. The case greatly affected the Town and caused many to question the safety of freedom-seekers in Niagara.

The Petition of the Persons of Colour 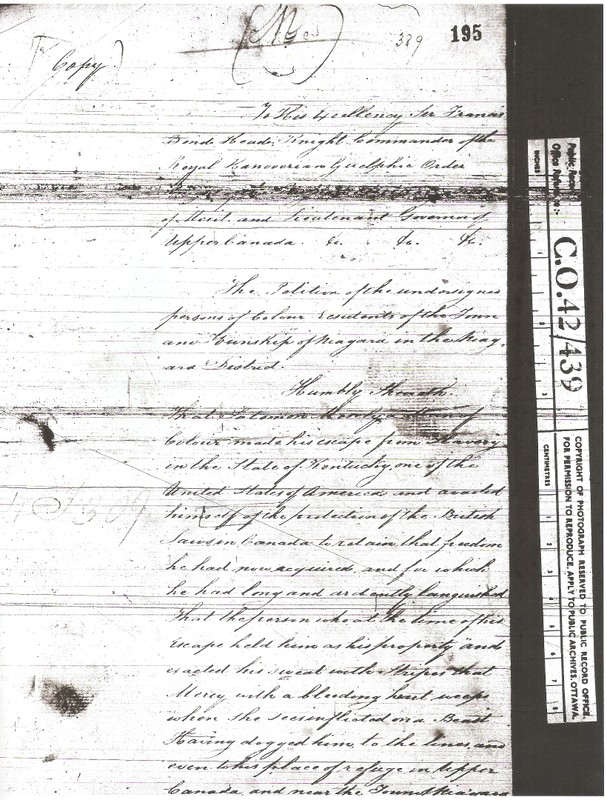 Above is the petition sent by the persons of colour of the Town of Niagara. They are pleading their case for Solomon Moseby by drawing attention to the fact the petitioners offered Castleman 1000 dollars and he refused, more than likely showing his greater worth to Castleman as a slave. The petition is transcribed below:

To His Excellency Sir Francis Bond Head Knight Commander of the Royal Hanoverian Guelphic Order, Knight of the Prussian Military Order of Merit and Lieutenant Governor of Upper Canada :

The Petition of the undersigned persons of colour residents of the Town and township of Niagara in the Niagara District.

That Solomon Moseby a man of colour made his escape from Slavery in the State of Kentucky one of the United States of America and availed himself of the protection of the British Laws in Canada to retain that freedom he had now acquired and for which he had long and ardently languished. That the person who at the time of his Escape held him as his property and exacted his sweat with stripes the Mercy with a bleeding heart weeps when she sees inflicted on a Beast Having dogged him to the lines and even to his place of refuge in Upper Canada and near the Town of Niagara and after failing in every other expedient to get him across the lines had him arrested for horsestealing and lodged in the gaol of the Niagara District and under that pretence we are informed only waits your Excellency’s answer [illegible] application for his surrender to the laws of a Foreign Country, which they pretend he has violated.

That your Excellency’s Petitioners most humbly beg leave to assure your Excellency that from the knowledge they profess of the fraudulent artifices which Slaveholders are in the habit of employing to repossess themselves of Slaves who have once [illegible] a sanctuary of Freedom within the British Dominions they hesitate not to declare to your Excellency on their solemn and secure belief that the accusation which is now set up against our poor Coloured Brother is nothing more than a mere pretense to secure him across the line of demarkation [sic] and from under the protection of the British Laws and institution and the moment he lands on the other side of the Niagara river the charge of horsestealing would be withdrawn and him dragg off once more to irremidiable [sic] Slavery.

They are the more confirmed in this opinion in the present case as the persons claiming the said Solomon Moseby holds him to be very valuable property and has refused 1000 Dollars for him in the presences of Alex Stewart Esq. Barrister of Law. That your Excellency’s Petitioners most humbly implore your Excellency to afford to the said Solomon Moseby that auspicious protection in his present destitute and forlorne condition which will effectually save him from the grasp of those whose only aim is to kidnap him once more into a state of hopeless and degraded Slavery.

And as in duty bound they will ever pray.

One hundred and seventeen white “Inhabitants of the Town of Niagara” also signed a petition “respecting Solomon Moseby the fugitive Slave,” arguing that:

It is the opinion of Your Petitioners that neither morally nor legally can a slave be guilty of the offence charged against him, not being a free agent; that it is notorious beyond all doubt that the man claimed was a Slave when he left Kentucky; that he is now a freeman by the constitutional laws of Great Britain; and that should he be given up, he will inevitably go back to Slavery, there to be tortured as an example.

The Petition of the Coloured Inhabitants of the Town and Township of Niagara on behalf of Solomon Moseby the fugitive slave.

© Government of Canada. Reproduced with the permission of Library and Archives Canada (2019).