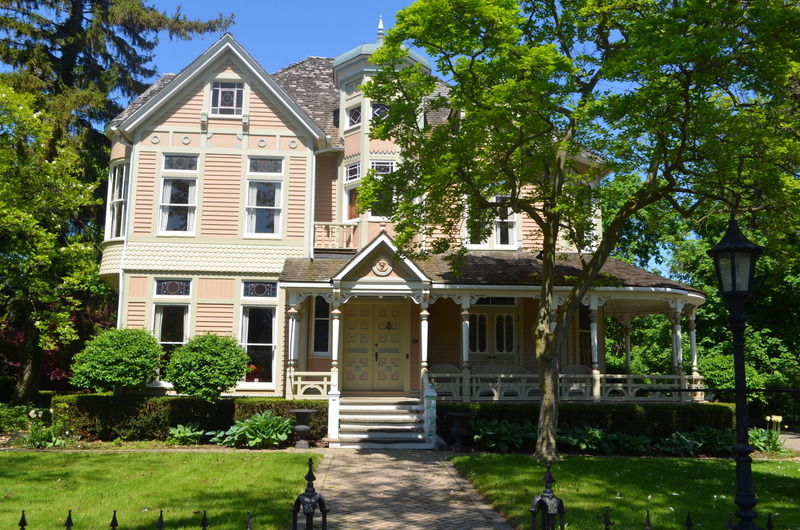 *This is private property, please respect the home owners and view the house from the sidewalk*

Fanny Rowley, who was a biracial, was the granddaughter of freedom seeker William Riley. She was the daughter of Fanny Riley Willson and the step-daughter of Black barber Lewis Ross.

Fanny met and entered into a relationship with Mr. Salmon Rowley (sometimes written as Samuel Rowley), a wealthy white man who immigrated to Canada from Philadelphia in 1881. In 1886, he built the home on King Street.

Salmon and Fanny tried to have children. Fanny bore two daughters, but sadly, both died in their first year and are buried in St. Mark's cemetery. According to census records, by 1901 the Rowley's had adopted a daughter, Maude Mutter, aged 15. They continued to live in the King Street house and Salmon acquired more lots which he bought in Fanny’s name.

While on a business trip to Philadelphia on 1905, Salmon died suddenly at his daughter’s (from a previous marriage) and his funeral was held in Philadelphia. Fanny became a widow with considerable property in Niagara-on-the- Lake. Shortly after, Fanny sold the properties and moved to Cleveland with their adopted daughter, Maude, who became a piano teacher. Fanny died in Cleveland in 1913 and is buried in St. Mark’s cemetery.

In the 1861 census, 13-year old Fanny was noted as being ‘mulatto.’ In the 1871 Canadian census, Fanny is identified as ‘African’ or ‘colored’ along with her mother, step-father Lewis Ross, and his six children. In the 1881 Canadian census Fanny and the entire Ross family’s origin is listed as ‘French’. No racial identification is enumerated in the 1891 census where she is listed with her husband Salmon Rowley. In the 1901 census Fanny is recorded as being ‘English’ like her husband Salmon.

When Fanny and Maude moved to Cleveland, Ohio, they were both listed as French Canadian in the U.S census and Fanny died as a white woman in 1913. This suggests that in Niagara they knew her ancestry, but her skin was so light that she was listed as white where her parents were unknown. Identifying African ancestry in marking Black history is sometimes diluted or erased through intermarriage.

The Rowley House and the Rowley Business Block 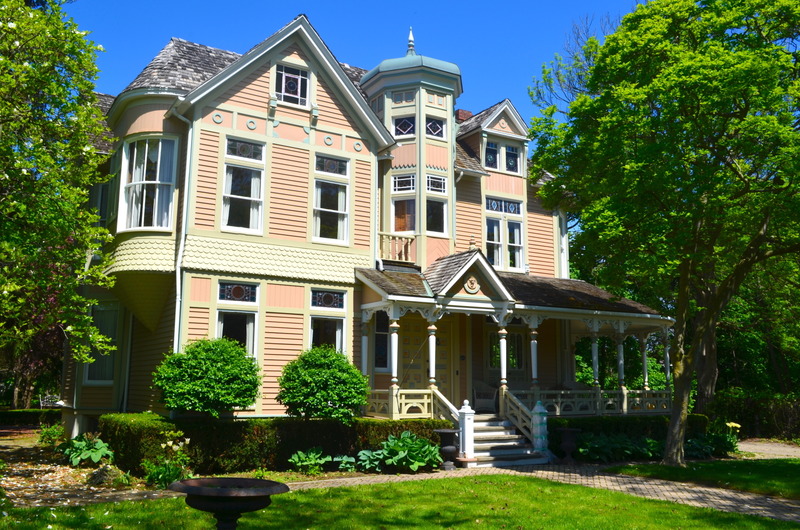 Fanny's grandfather, William Riley, had built a log cabin in the "Coloured Village" when he arrived in Niagara as a freedom seeker. Just over sixty-five years later, Fanny was raising her own family in one of the most beautiful homes in Town.

In the 2000s, this home housed the Trisha Romance Gallery until it was sold in 2016 and returned to usage as a private home.

Along with the house, Fanny and her husband Salmon owned a considerable amount of land in Town. The businesses on Queen Street that stretch from King Street to Regent Street became known as the Rowley block. Fanny was active in keeping up the land and businesses as her name is on many of the Town documents regarding taxes, permits and correspondence. 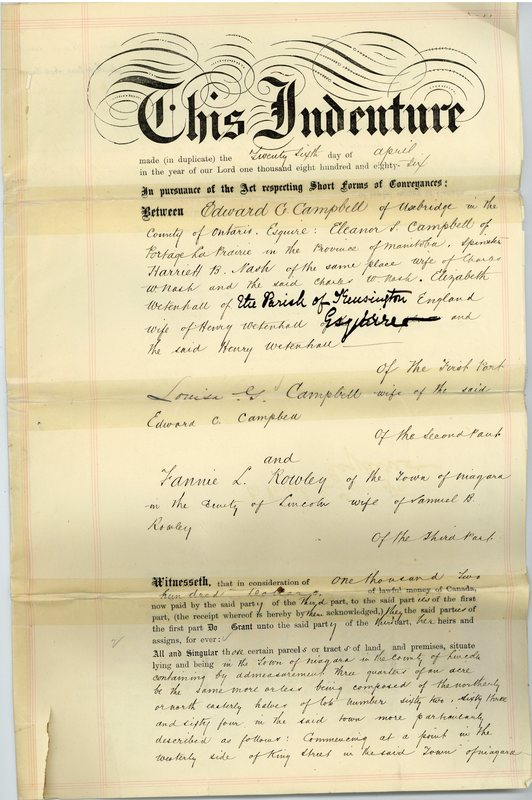 This is the land deed which granted Fanny Rowley lots 62-64 on Queen Street, which later became known as the Rowley business block. 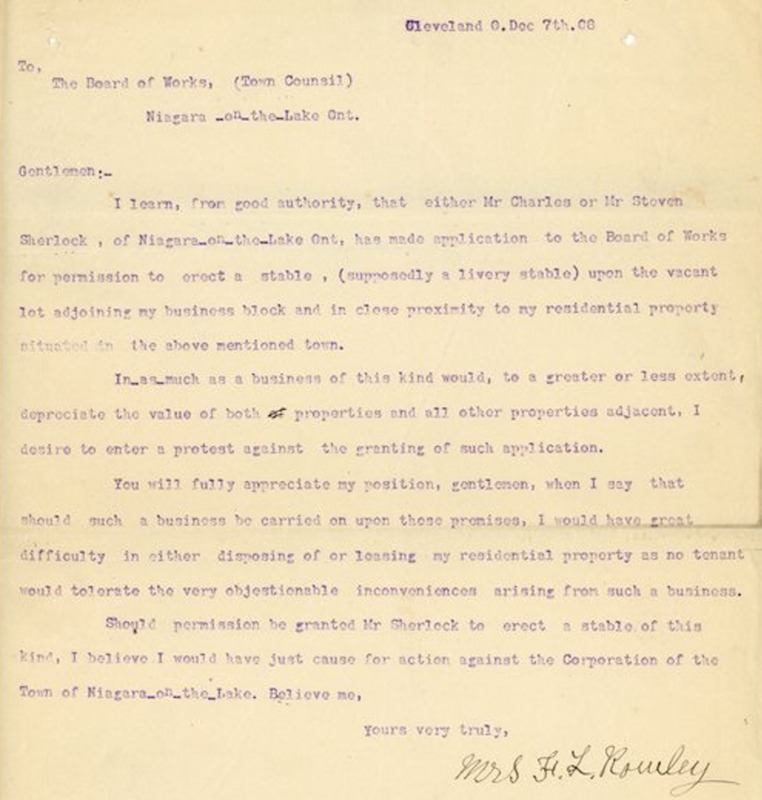 Here you can see a letter written by Fanny Rowley to the Board of Works for the Town. Fanny is protesting the building of a stable near her residential properties. She is writing the letter from Ohio, as she had already moved to Cleveland by 1908.

This letter is a great example of Fanny's business sense and the active role she played with regards to her land. The letter also shows some of her personality as the writing is direct and to the point, ending the letter with a threat of action to believe her. 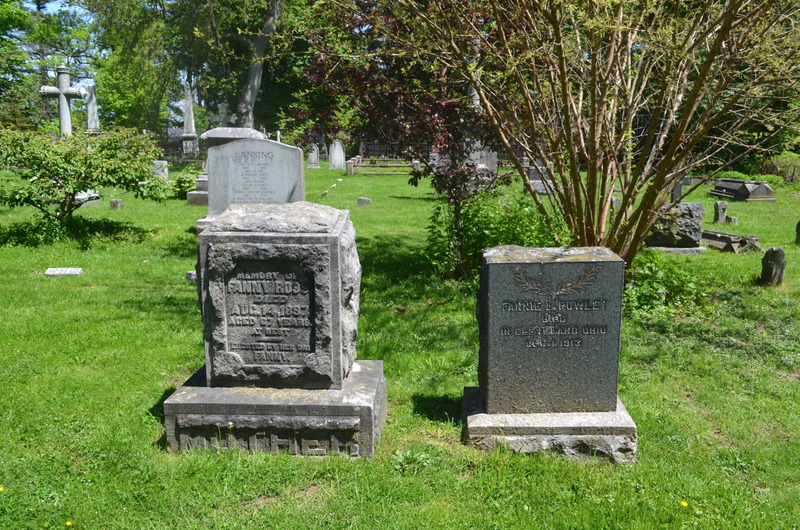 Fanny Rowley's death is marked with a gravestone in St. Mark's Church. Her memorial is located beside the gravestone for her mother Fanny Ross.

Their graves are located in the South Eastern part of the cemetery close to Byron Street. 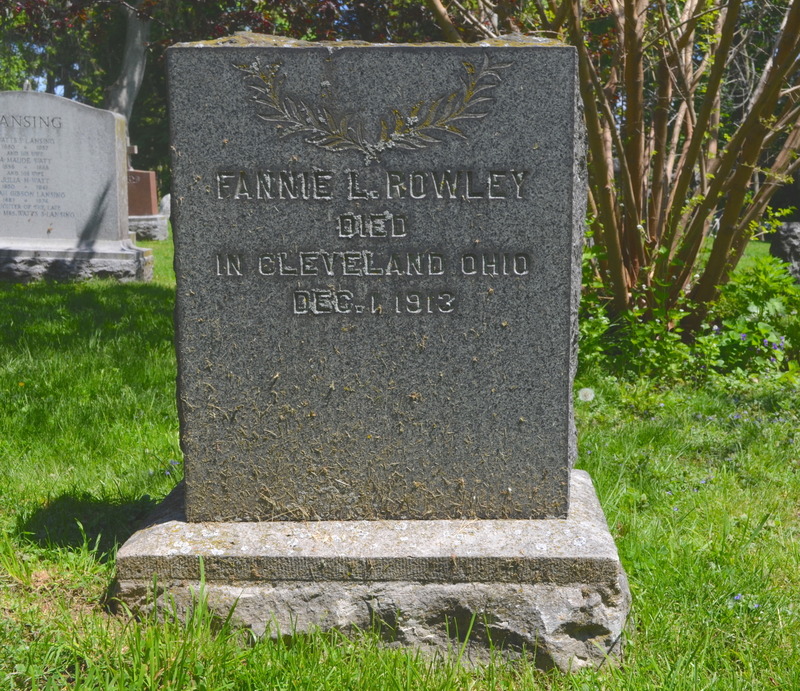 This is the grave marking Fanny Rowley's death. Although she died in Cleveland her body was returned to Niagara-on-the-Lake to be buried at St. Mark's Church. 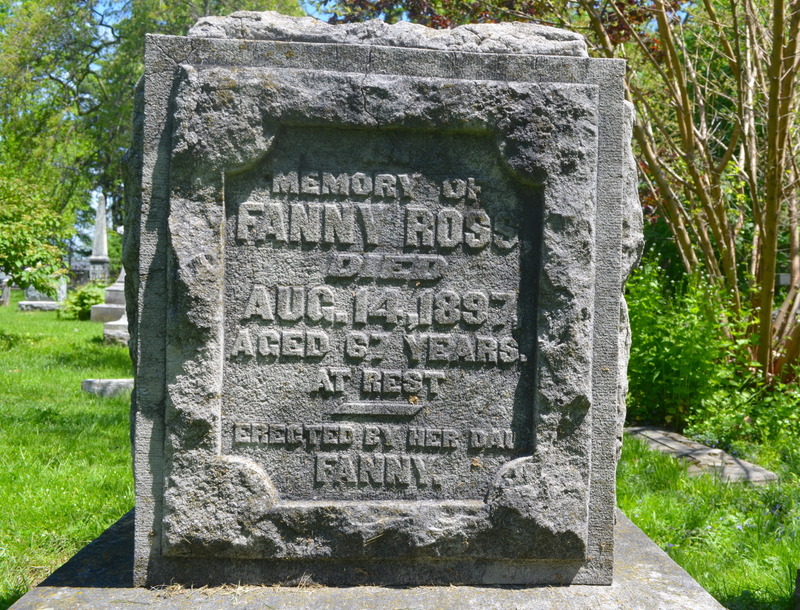