The Sundial of Parc J.-Émile Cloutier 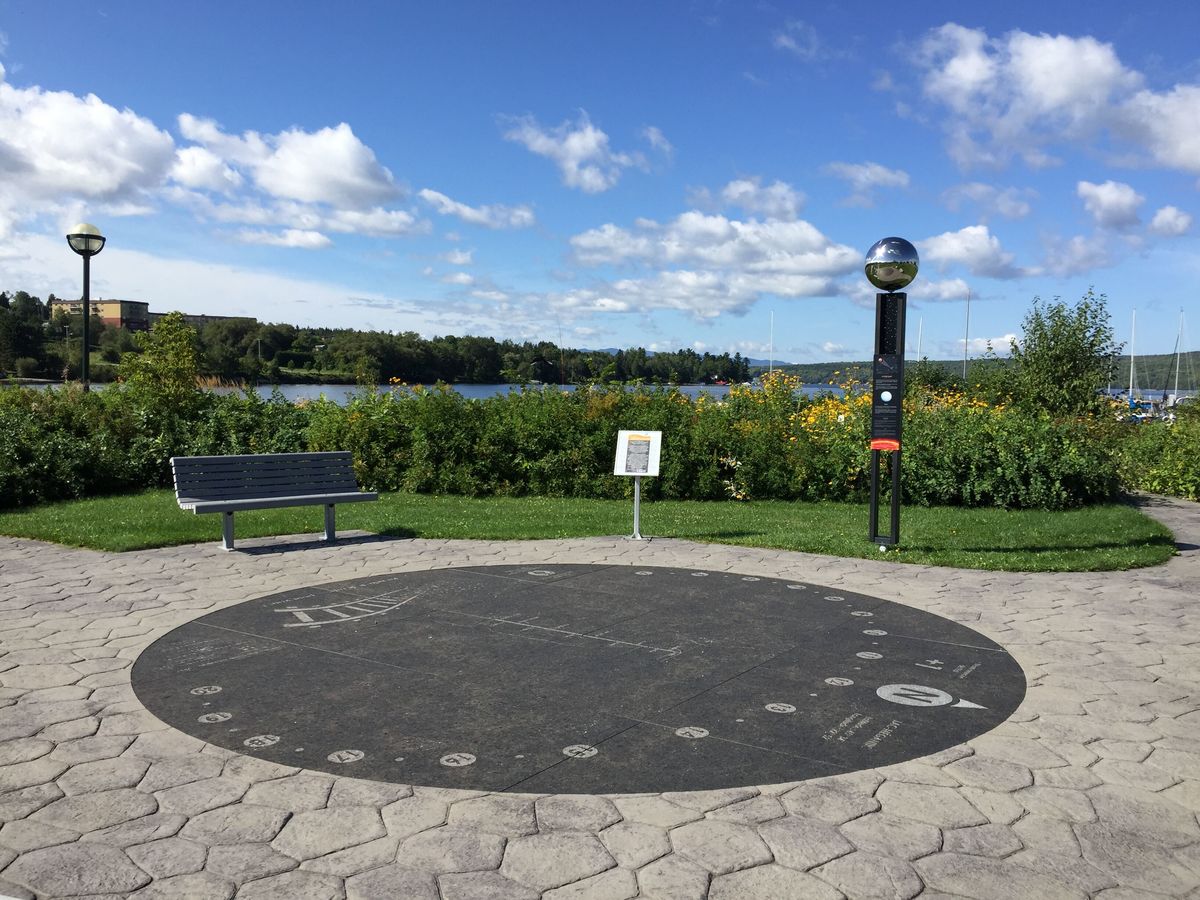 The sundial is mounted on a granite slab with a diameter of 18 feet made by A. Lacroix Granit, a company based in Saint-Sébastien. The work was designed by Geneviève Massé, dial specialist, and installed by Sylvain Gagnon from the Lac-Mégantic’s company Monuments Gagnon.

The sundial is circled by a stamped concrete footpath, giving access to park benches. The procedure for the use of the sundial is explained on a panel. Following the steps to read the hour is simple and fun.

One of the largest representations of this type in the world

Designed to scale by size and distance, spread out along the Summit Drive, this is one of the largest representations of this type in the world!

Measuring hundreds of millions of kilometres, our Solar System is so wide that it is difficult to imagine it well.

What would be its proportions if we could reduce the Sun to the size of the Mont-Mégantic Observatory (1.4 million km to 14 m)? Compressed 100 million times, our planetary neighbourhood would spread out across the whole region!

While exploring the Mont-Megantic International Dark Sky Reserve and the Summit Drive, you can discover eight planets and two dwarf planets. Five of these celestial bodies are on the Mont-Mégantic National Park territory, in Notre-Dame-des-Bois. The other five are distributed among the towns of the region: La Patrie, Piopolis, Lac-Mégantic, Lambton and Sherbrooke!

The closest star? At this scale, it would be farther than the Moon! 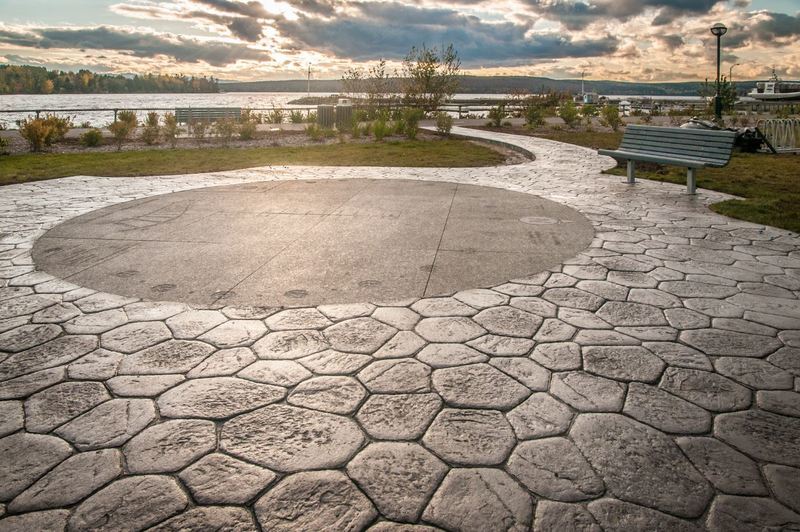 To celebrate the Mont-Mégantic Observatory’s 40th anniversary, teams from ASTROLab and Mont-Megantic International Dark Sky Reserve have joined the Summit Drive’s team to deploy a giant solar system with planets located in strategic halts along the Summit Drive. 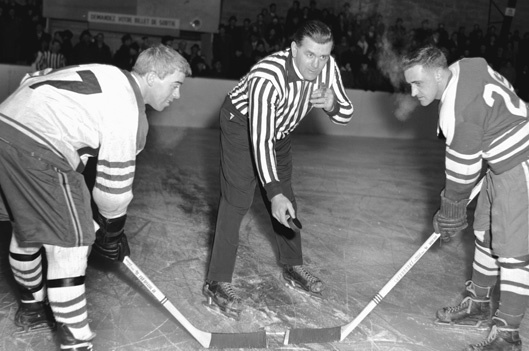 Before the development of J.-Émile-Cloutier Park, Centre Monseigneur Bonin was here, with its skating arena, bowling alleys and other sports equipment. On the picture is the symbolic face-off for the official opening of Centre Monseigneur Bonin in 1961. Maurice Richard was there and, on his right, was André Lebrun, local team player for the All Stars of Lac-Mégantic.

Requiring major investments in order to be renovated, Centre Monseigneur Bonin was demolished in 2011 and replaced by the Centre sportif Mégantic (CSM), located behind rue Papineau.

The First Sawmill of Lac-Mégantic 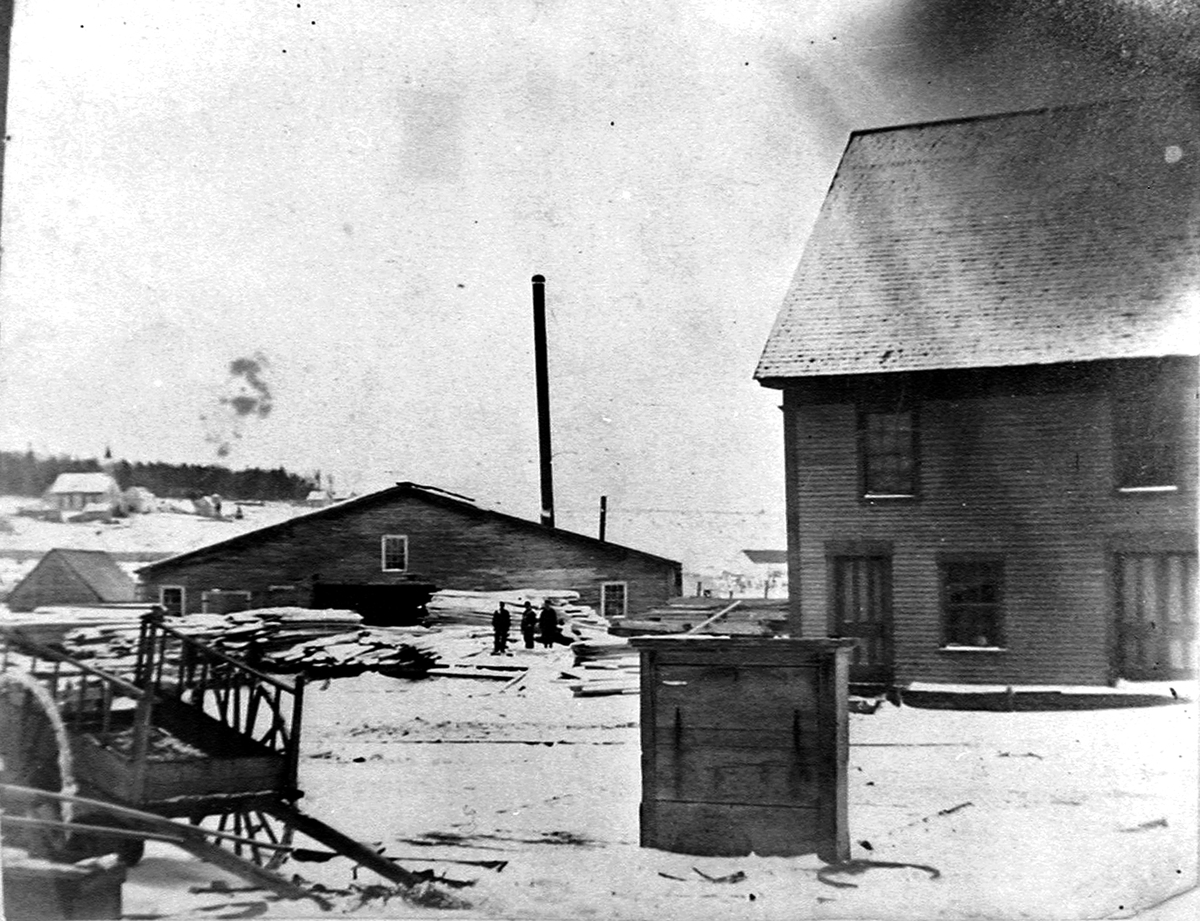 The town hall, inaugurated in 1964, stands at the exact location of the very first Lac-Mégantic sawmill. In 1878, Télesphore Legendre built a large building of 2,400 square feet for his operations. At the time, the numerous forests fostered the wood industry development and many companies settled in the immediate vicinity.

A little further on the West side, on the shores of the Mégantic Lake, the Compagnie nantaise moulins à scie et à farine, founded in 1881, attracted a number of European immigrants.

The salary of the workers was often paid with tokens, or chips, that could only be exchanged at the company’s general store. This system was rather beneficial for the company, as it could pay its employees at no cost.