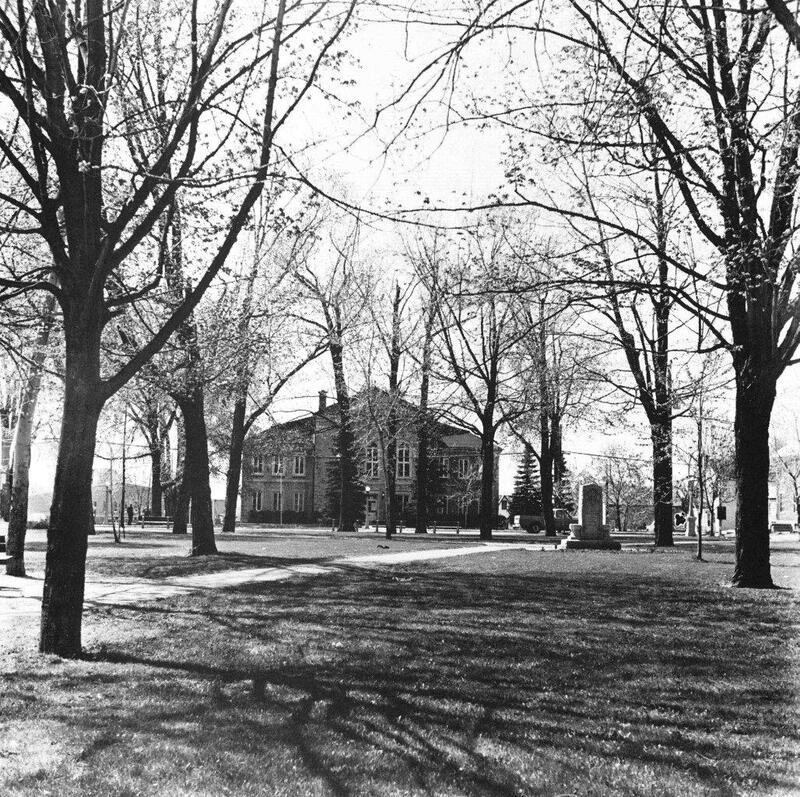 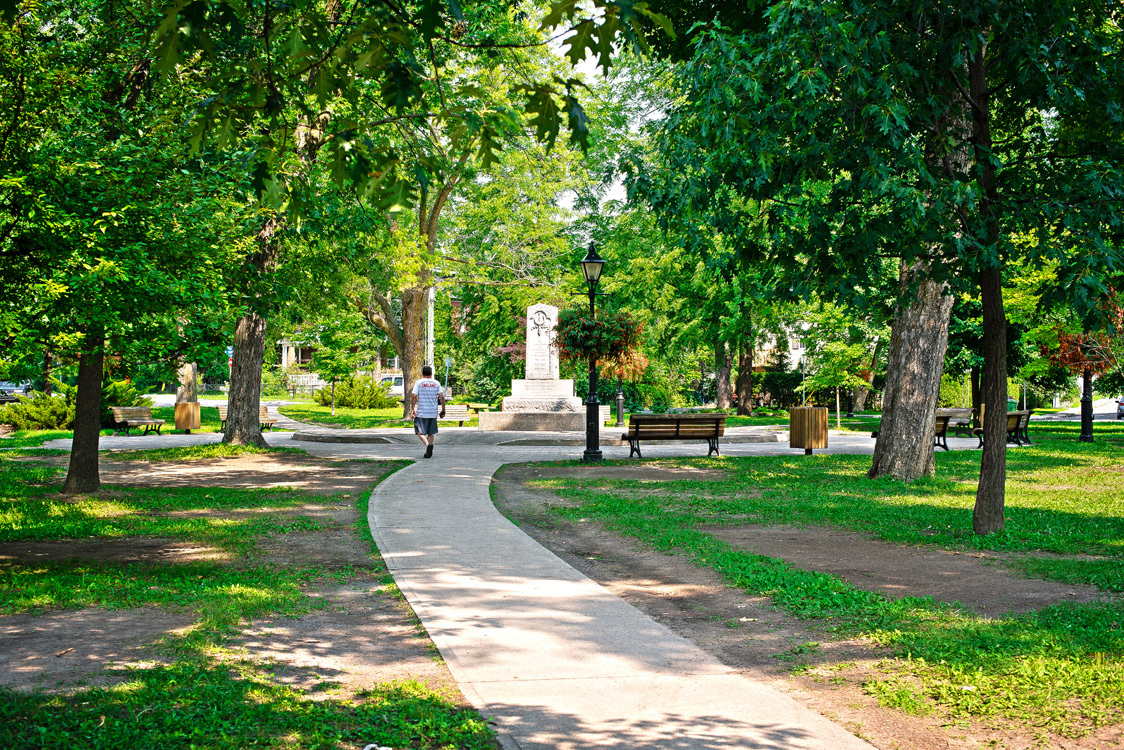 Memorial Park, formerly Market Square, as it now looks, with its hundred-year-old trees, benches and pathways 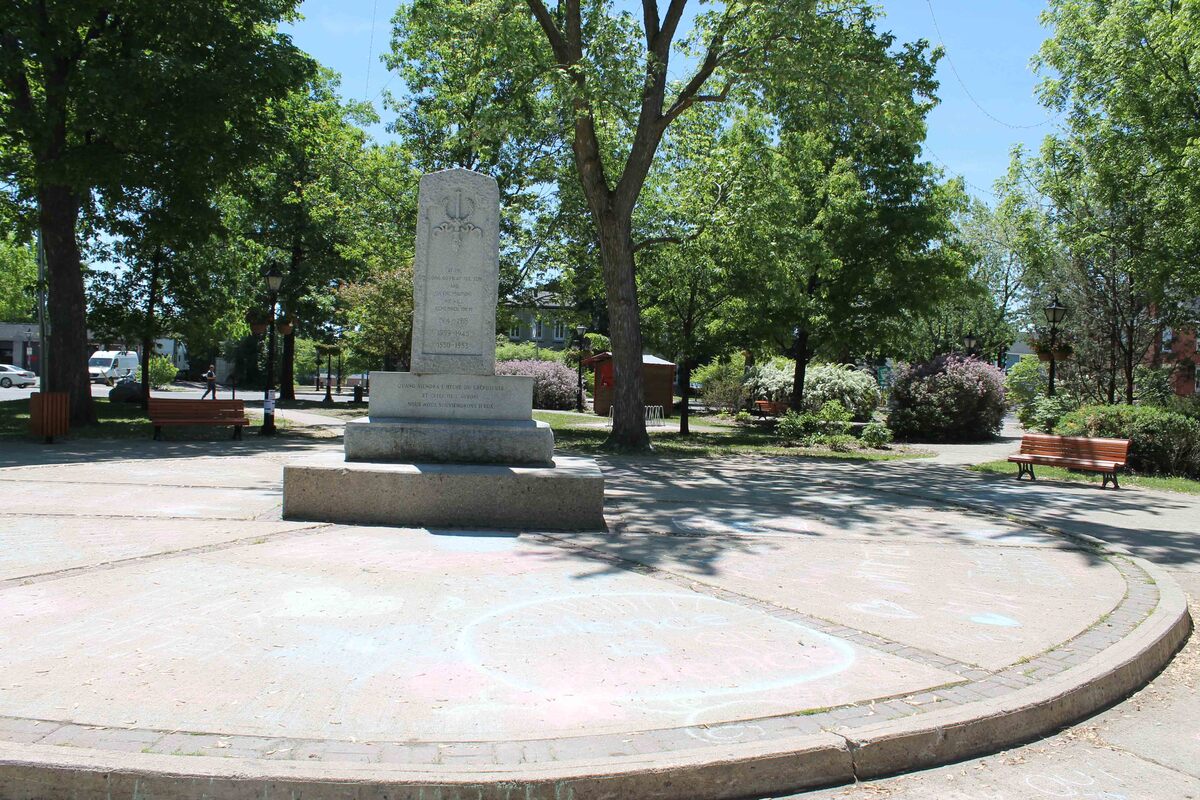 The monument in the park is dedicated to the soldiers who lost their lives in World War I and World War II, and in the Korean War. Every year, on November 11, a Remembrance Day ceremony is organized there by the Aylmer Legion. 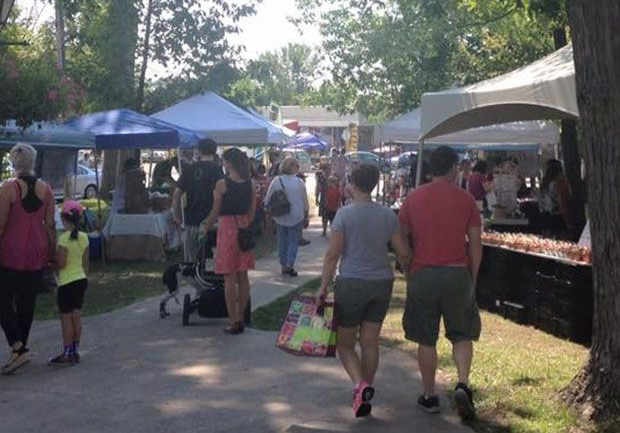 Every Sunday in the summer, Memorial Park becomes Market Square, with its market gardeners, artisans and farmers from throughout the Outaouais, and entertainment. Something for the whole family.

This land belonged to Charles Symmes, who in 1843 set up a market where farmers from all around the region could come to sell their products. Later, in 1853, he sold it to the municipality. The original Market Square was much larger, extending westward as far as rue Court, to the next intersection.

The old Market Square soon become a strategic location for the city’s economic and social development. As a result, important buildings were built around the site, including the courthouse and the first city hall.

Its social vocation has held strong since 1921 through its transformation into Memorial Park in tribute to the Aylmer residents who lost their lives in World War I. The vegetation has been preserved, which, together with the outdoor experience, contribute to the appeal of this heritage site, creating a balance between nature and man-made structures.

To this day, every Sunday from June to October, the Market Square is resurrected as farmers and artisans come to sell their products.

Built in 1852 by the government of the United Province of Canada (at that time located in Quebec) on land donated by Ruggles Wright, this stone building, mentioned in the British North America Act, served as the courthouse for legal disputes, as the Office of the Registrar for the county and as the jail, which regulars call “the hole” because of its dismalness. A 12 foot-high wall surrounded the jail yard. Legend has it that there was even a hanging there once.

This building also attests to the origins of Aylmer’s bilingual and bicultural character. Its construction attracted a different social class of professionals related to the justice system. A good many notaries, attorneys and prosecutors moved in nearby, boosting Aylmer’s economic and social development.

In 1897, the courthouse moved to Hull, and the government donated the building to the City of Aylmer, which turned it into its city hall, and converted the jail into a fire station. In the early 1900s, a stone tower was built at the back to dry the fire hoses. That tower was demolished in 1962. In 1987, the city hall moved to a new building, and this one was converted into a municipal library, and later on into a cultural centre with an art gallery and the La Basoche theatre.

This Classic Revival style building made of dressed stone impresses with its pediment, cornices and the windows on the second floor of the centre section in the Renaissance style.