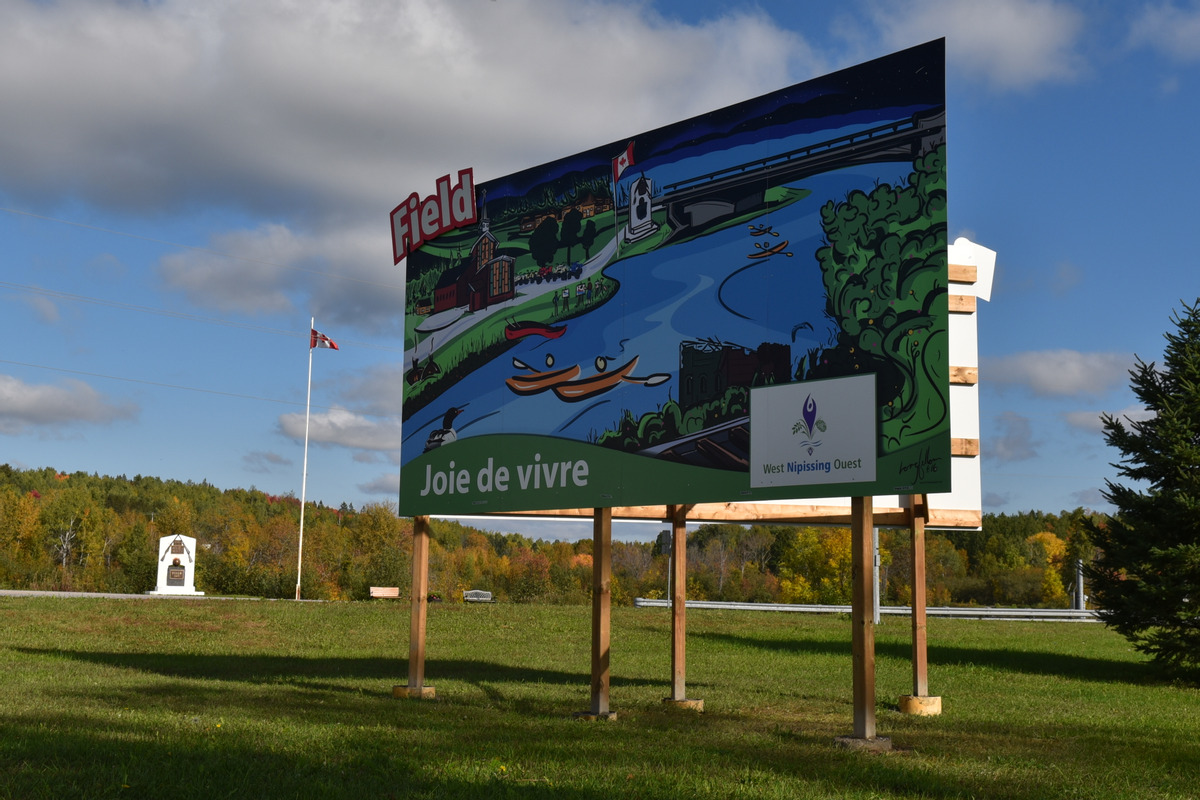 Since the arrival of Europeans in North America, the timber trade has attracted investors and encouraged immigration. The community of Field and its surroundings owe their existence and strong Franco-Ontarian presence to the industry, and it is therefore no surprise that residents sought to reflect it in their welcome sign.

The community has evolved since its lumbering days and instead of welcoming lumber jacks, they now have an influx of visitors seeking eco and art-based tourism opportunities. Seeing as both historic forestry activities and today’s tourism experiences have the river in common, it was also essential to include the Sturgeon River as a focal point. 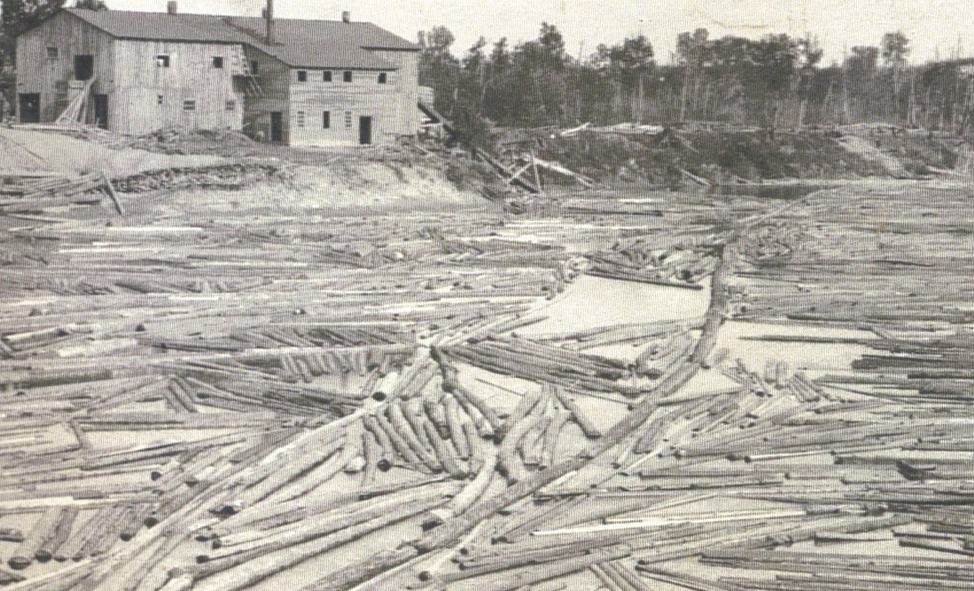 By the 1810s, pine became the tree of choice for export to Great Britain and the United States.  It was the arrival of the Canadian Pacific Railway in Sturgeon Falls in 1882 that caused thousands of lumberjacks to migrate westward and quickly spread out over the Sturgeon and Temagami River watersheds to cut down the large red and white pines.

The year 1905 saw the establishment of both the first local sawmill and Hotel in Field.  This was soon followed by the establishment of several sawmills including a steam sawmill on the banks of Hébert Brook near Desaulniers and the Field Lumber Company, conveniently located on the Pike and Sturgeon Rivers near the railroad track. 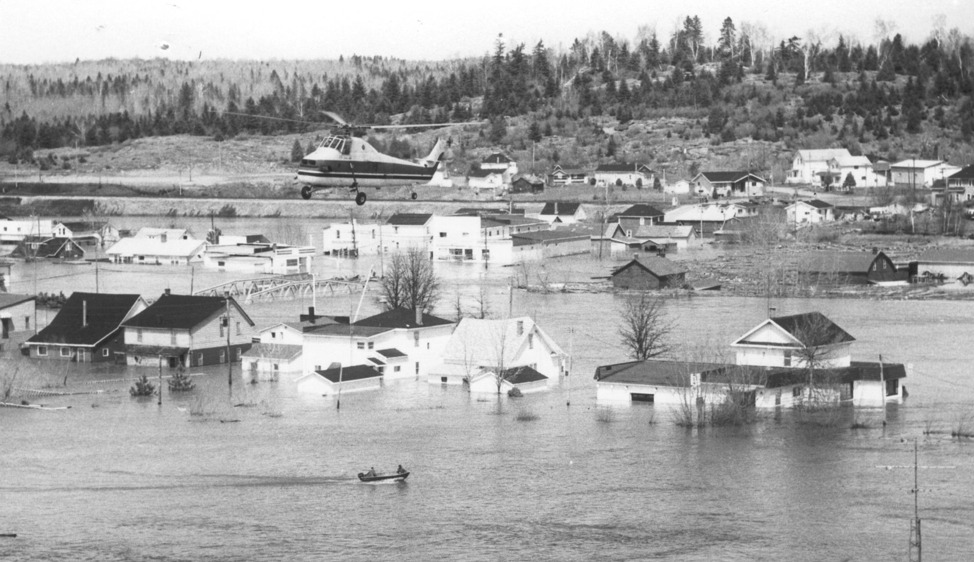 In late April and early May 1979, the village of Field experienced the most devastating flood in its history.  The Sturgeon River swelled and in a matter of hours, hundreds were forced out of their homes.

The Notre-Dame-des-Victoires Catholic church, although built very close to the river, was one of the few buildings not to totally flooded.   The provincial government paid to relocate those affected to a subdivision on higher ground, and though compensated for their property, most took a financial loss.

Most businesses in Field did not re-open following the flood and the sawmill, Field's main employer, closed for good a few years after that. The town which had a population of 750 people in 1979 is now less than half the size. 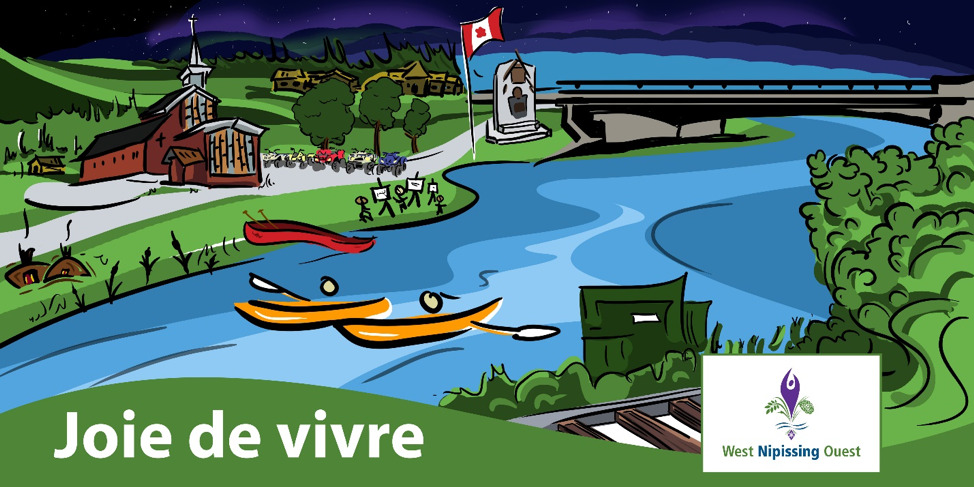 Notes from the Artist

The layout was pieced together from various sketches which included the important elements identified by the community.

Cob ovens were included, paying homage to the annual River and Sky festival that attracts visitors from all over the province. The sky represents the dreamers, the magic of the northern lights and shooting stars. ATVs were added at the church parking lot to represent the annual Poker Run along with artists working at easels along the shore of the Sturgeon River.

Additions to the final composition included a second set of kayakers, a male Merganser, accurate details of the mill and a Great Blue Heron in flight.
Get directions
QR code