Getting to the other side 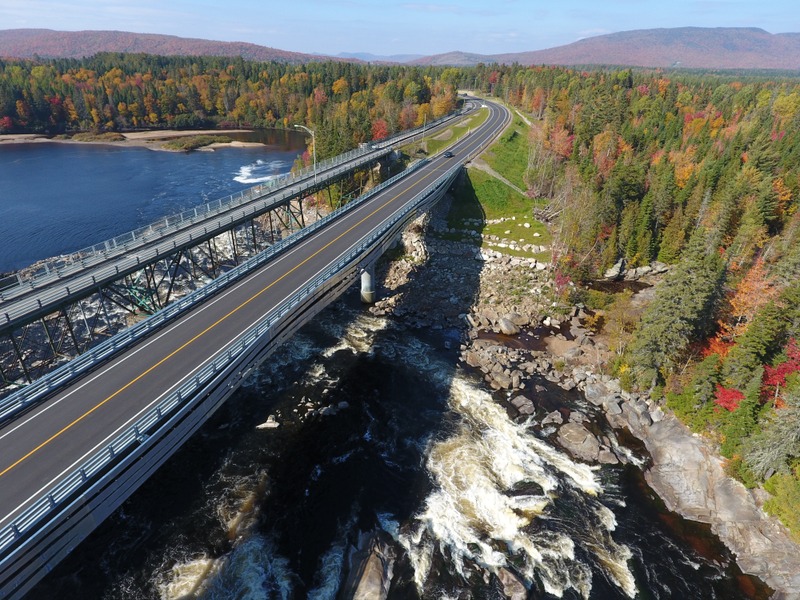 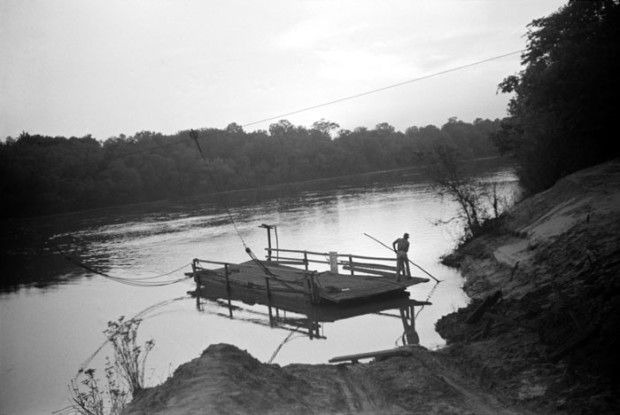 Two ferries were available for people in the area who wanted to reach the other shore. The first was a wooden barge with guardrails three feet high, capable of accommodating up to four horses.  It was controlled by solid cables and a winch operated by a ferryman.  Located about four miles (6.4km) upstream of the Shannon bridge, it was in use until the region was expropriated in 1914.

After the expropriation, a second ferry was required.  It was put into service just upstream of the dam located a few meters from the Shannon bridge and this ferry was used by the citizens until 1919.

The first bridge was made of wood 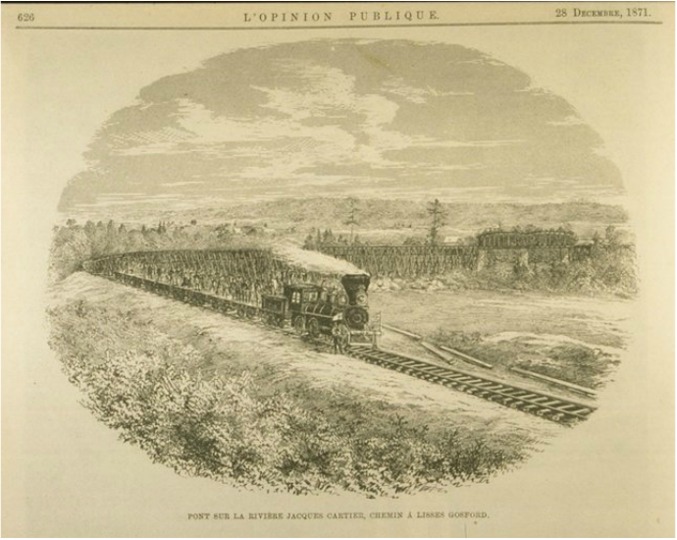 On November 26, 1870, the Quebec and Gosford Wooden Railway opened a bridge made of wood.  The 19.1-ton wooden bridge was 22 metres high and extended by a trestle structure stretching 381 metres in length on the north side of the Jacques-Cartier River.

It was located approximately 40 metres east of the metal bridge that replaced it.

A bridge without railings 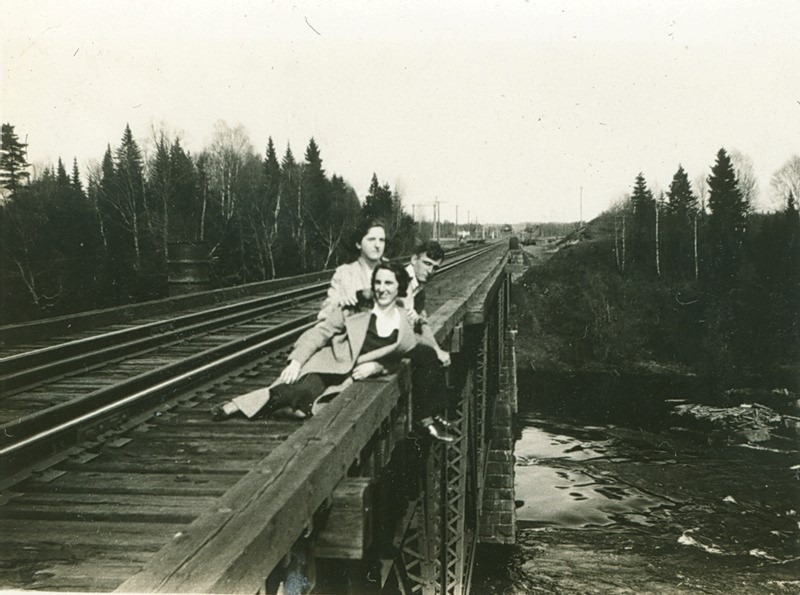 Crossing a bridge without railings was not without danger, as we can see in this anecdote of a Shannon citizen about an experience his mother had as a child:

My mother was born in 1918 and at the age of 6 she often had the chore of picking up the mail at the corner of Wexford (6th range) and Gosford. The Post Office was a mile from the house and she had been warned repetitively by her mother to always come straight home.

One day as she was making her “pick-up”, a man drove in with a car (a rarity at that time). She knew him quite well and as a friendly gesture, he offered to take her to the store located on the south side of the river for a chocolate bar. They crossed the bridge going south without problem (no railing) and upon arrival at the store, the kind gentlemen bought her a “cherry blossom”.

She didn’t open it, intending to save it for later as desserts of this type were not plentiful.

On their way back and crossing the bridge a second time, a tire caught a rail tie and the car turned sideways on the bridge with the windshield facing the water. My mother had the treat in her hand and had crushed the wrapper out of fright. She had raised her arms in the confusion and the cherry sauce was running from her wrist to her elbow.

The driver needed help to get the car turned and headed in the right direction. As a result, the whole community knew of the incident and so did my grandmother. My mother’s reception upon returning home was not a pleasant one. 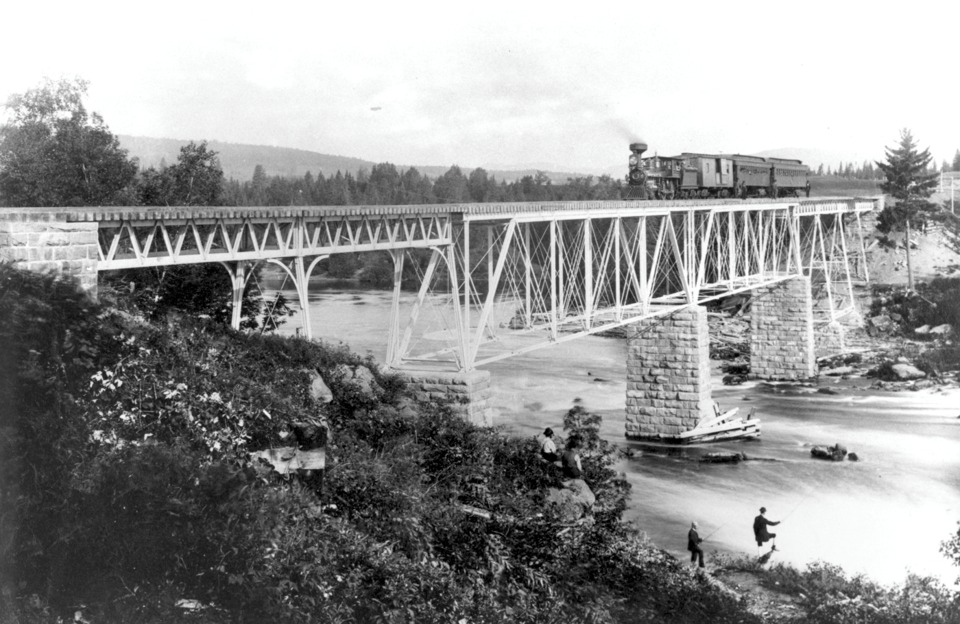 This illustration is one of the most iconic images of the Shannon Bridge at its beginning.

Here we are under two bridges: the Shannon Bridge, which was built in 1879, and Le Pont des Irlandais, built in 2016. At one time there was another bridge here, a wooden bridge that had been built in 1869 for the “Gosford & Quebec Wooden Railway”. It lasted less than 10 years.

Unlike the latter, the Shannon Bridge has now lasted for more than 140 years. It is a major part of Quebec’s historic industrial heritage and an excellent example of early railway engineering. Built in 1879 as a railway bridge and transformed into a road bridge in the early 1930s, it is now the road bridge with the oldest Phoenix-style steel trusses in Quebec and is amongst the oldest metal bridges in the country.

The bridge was designed and built by Clarke, Reeves & Co. of Pennsylvania using Phoenix or Keystone columns.  Its masonry pillars and pedestals were built by Mr. Barnabas Gibson, a contractor from Whitby, Ontario.  The bridge was used by the “Quebec and Lake St. John Railway”, the “Canadian Northern Railway” and the “Canadian National Railway (CN)”.  In 1919, however, the bridge was forced to close to rail traffic on the Gosford Spur because it had become too fragile to support locomotives which, over the years, had become heavier and heavier. Even so, in 1901, in order to straighten out the railway, and thus avoid an inconvenient curve on the north side of the Jacques-Cartier River, a new railway bridge had been built about a kilometer downstream from here.That bridge still exists today and serves as part of a bicycle path that reaches from Quebec City  to Rivière-à-Pierre.

After the closure to rail traffic on the Shannon Bridge, access was limited to those who wanted to cross on foot, on horseback or by car. From 1919 to 1929, a man named Edmond Conway rented the railway’s bridge to transport wood with a horse-drawn rail wagon.

Two ferries had also been available for those in the area who needed to traverse the river. The first was a wooden barge with three-foot-high guardrails. It could accommodate up to four horses and was controlled by solid cables.  It was powered by a winch operated by a ferryman.  Located about six and a half kilometers upstream from here, it operated until the expropriation of that area in 1914.

Because of that expropriation, a second ferry became necessary.  It was put into service just upstream of the dam located but a few meters from here. That ferry was used by citizens until 1919.

In 1920, citizens received a grant from the government to build the bridge to accommodate motor vehicles.  The tracks were kept to honour Mr. Conway’s lease, but wooden plank trailers and guardrails were added for passing cars and trucks.  It was the only hybrid hi-rail bridge in all of Quebec to share a single deck track.

Over the years, several other renovations were carried out. These renovations included the addition of a sidewalk, guardrails, new ramps, a lighting system, as well as structural and reinforcement work.  In 1932, the plank floor and the rails were removed, and a new concrete slab was poured to provide a 15-foot-wide roadway. All these works did not significantly alter its appearance from that of its original construction in 1879. Today, the Shannon bridge stands as an important artifact of that unique type of structure.

The new modern bridge was built in 2016 to allow for two-way traffic. In 2020, the Quebec Ministry of Transportation officially named it “Le Pont des Irlandais”, or “The Irish Bridge”.