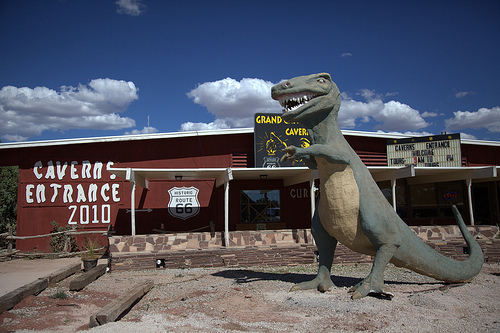 Peach Springs owes its name to peach trees that used to grow there. Since the locomotives needed spring water, a water tank was built near the railroad. A city was developed around the station and, in 1883, it was said that it had 10 bars but no school and no church. Today, Peach Springs is the administrative headquarters of the Hualapai Indians nation. There isn't much left of the stores on Route 66 in Peach Springs, except for a few abandoned stone buildings and an old garage still open, a survivor of the old route. There are also the Grand Canyon Caverns. 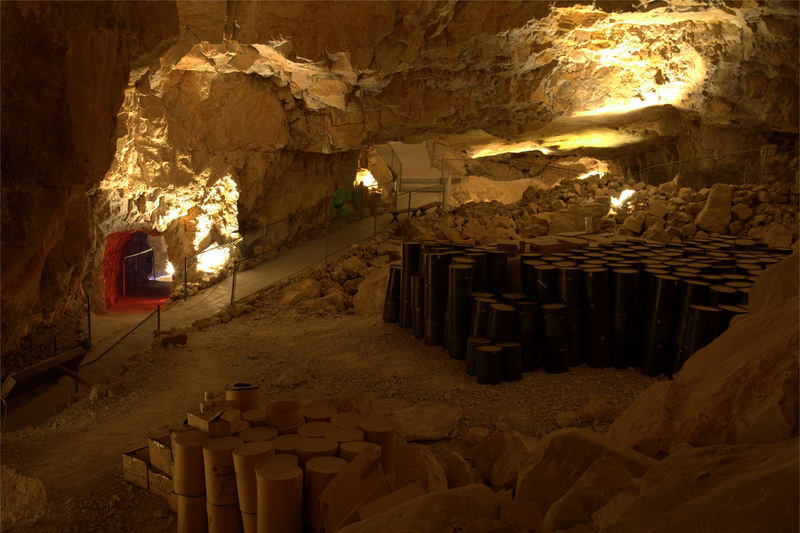 The history of the formation of the Grand Canyon Caverns started 345 millions of years ago, at the bottom of an old river. All the American southwest was covered by the ocean. The passing of the marine animals left shells and skeletons, creating oozing mud, very rich in whitewash deposits. This mud became one day bedrock limestone which is the base rock of the Caverns. Later, following volcanic eruptions and earthquakes, the bottom of the ocean rose up to hundreds of meters, becoming the rims we know today. The elevation of the caverns is now over 1500m above sea level. These earthquakes splitted the earth's crust. The rainwater seeped into the limestone. That's how the Grand Canyon Caverns were born.

Millions of years ago, there were many periods of abundant rain and tropical downpours. The rain, slightly acid, came into contact with the limestone and dissolved the softer parts. This created corridors and cavities that the water soon filled. When the rain decreased, the cavities got empty. After millions of years and changes in conditions, the water, by evaporating, deposited calcium carbonate and created the beautiful formations that we can see today.

97% of the caverns in the world are humid. Water is still flowing; formations are still developing. The Grand Canyon Caverns are dry, which means that there are no formations in progress. Only 3 caverns out of 100 are dry, which makes these Caverns very rare and unique.

History of the Caverns 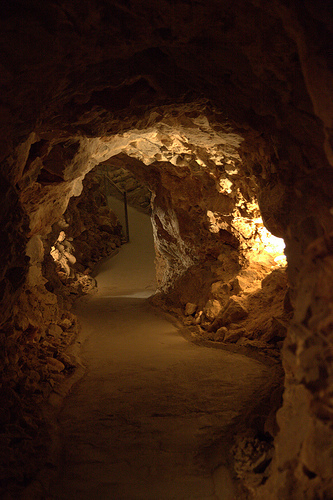 In 1927, a young woodcutter, Walter Peck, was going to play poker with his friends. On his way, he tripped and almost fell in a big funnel-like hole. Since he didn't have the proper equipment to explore the hole, he kept going. When he arrived, he told his friends about a new big hole in the middle of his path. The morning after, Walter gathered his friends. With cords and lanterns, they went to explore the hole. A cord was attached around a local cowboy's waist. They made him go down. When his feet touched the ground, 45m of cord had been released. He found himself in a big and dark cavern. With the help of his coal oil lantern, he went exploring. However, the only thing that excited him was the thought that he found gold. With the light of his lantern, he saw something sparkle. He quickly filled a bag with samples. He gave his signal, three pulls on the cord. When we went back up, he showed the samples with great excitement to Walter. He then told his friends that he saw the remains of two human skeletons. His story attracted journalists and scientists who wanted to study the bones. Walter bought the property and the Caverns to extract gold.

However, when the analysis was made, Walter turned out extremely disappointed. There was no gold, only iron oxide or rust. Walter had spent his money on an empty hole and a rust factory. Still, as a resourceful man, a bright idea came to him. He would charge 25 cents to enter the Caverns and to see where the caveman was found. He built a primitive elevator. The visitors were attached at the end of a rope and they were pulled down by a hand-operated crank. These tourists had to provide their own source of light, usually a kerosene lantern. When they touched the ground, it was imprudent to untie the cord, because if the source of light was lost, the speleologists would be in absolute darkness.

In 1935, during the Great Depression, work camps were made available for the unemployed people. The Civilian Conservation Corps (C.C.C.) made a deal with Walter. If he provided all the material, they would build a new entrance to the Caverns. When they finished, the access was improved. The 9 first meters of the Caverns were a wooden staircase, then there were three ladders (4.5m each). A nice suspension bridge covered the last 18 meters. This new entrance brought 15 levels to get in and 15 levels to get out. At the end of this stage of construction, the price went up to 50 cents per person. Now, more then one person could enter the Caverns at once. It was the only way in and out of the Caverns until 1962. Then, a new well was blown up 64m deep and a modern elevator was installed.

We finally found out how the two skeletons got 50 feet underground. During the winter 1917-1918, a group of Hualapai Indians were cutting firewood on top of the caverns. Two brothers got the flu. Before the group went back to Peach Springs, a snowstorm trapped them on the top for three days. Finally, the storm was over, but they couldn't dig a grave. The Hualapai had to bring the bodies back, but they were afraid. If they brought the bodies back, would they spread the flu on all the tribe? What could they do with these two bodies? They remembered a small hole well hidden on the top, so they used this 15m hole to bury the two brothers. To them it was just a 15m hole. They had no idea that the bottom of their hold was only a big rock that fell thousands of years ago, sealing the furrow leading to the Caverns. Since the hole had been used to bury these two persons, the Hualapai considered this region as sacred. When the elevator was functional in 1962, the natural entrance was sealed forever by the neighbours, the Hualapai.