Back to Las Vegas 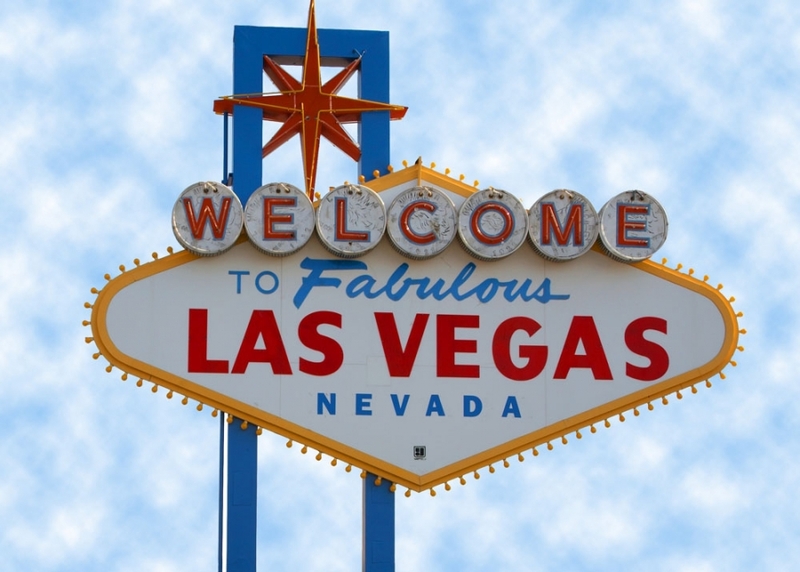 Las Vegas is the biggest city in Nevada, located in the Mojave desert. You could say it first looked like a swamp supplied by artesian springs. This spring provides the Paiute Indians with the opportunity to quench their thirst when they migrate. In 1829, Antonio Armijo, both explorer and merchant, led a trailer with 60 men on the Old Spanish Trail in order to create a trade route between New Mexico and Los Angeles. One of these men, Raphael Rivera, discovered Las Vegas looking for sources of water. In spanish, this name means "the meadows". Las Vegas is part of the Spanish Trail.

In 1855, Brigham Young, head of the Church of Jesus Christ of Latter Day Saints, led 30 missionaries in order to convert the Paiute Indians to Mormonism. Farmers supporting this religion built a fort and stayed there for good. Since the crops couldn't feed everyone and that the Indians were rising up, the Mormons left the place in 1857 during the war of Utah. It's the American army who gave the fort the name of Fort Baker in 1864. Its water springs allowed Las Vegas to be a stop on the road between Los Angeles and Alburqueuqe, where a railway runs.

Las Vegas, still a village, is established in 1905, and becomes a town in 1911. This happened thanks to an auction set up by the railway companies of San Pedro, Los Angeles, and Salt Lake Railroad Co.

During the Great Depression in the 1930s, the Hoover Dam, about fifty kilometers south, allows the town to grow. It really insisted to be the headquarters of this construction. Gambling was legalized in 1931. The dam offers water and electricity in sufficient quantity to bring the city back to life.

After World War II, the construction of hotels-casinos downtown by people of the mafia like Bugsy Siegel or Meyer Lansky make the city more important, and prostitution is increasing. The city is surnamed "Sin City" because of the gambling, the adult shows and the legal prostitution, and "City without clocks" because the casinos didn't want a clock to distract the gamers.

In the 1970s-1980s, tourism keeps increasing and makes the city prosperous. One must note the contribution of casino titans like Howard Hugues and Steve Wynn. A dozen years later, it is more a convention center. The investors are sometimes criminals. 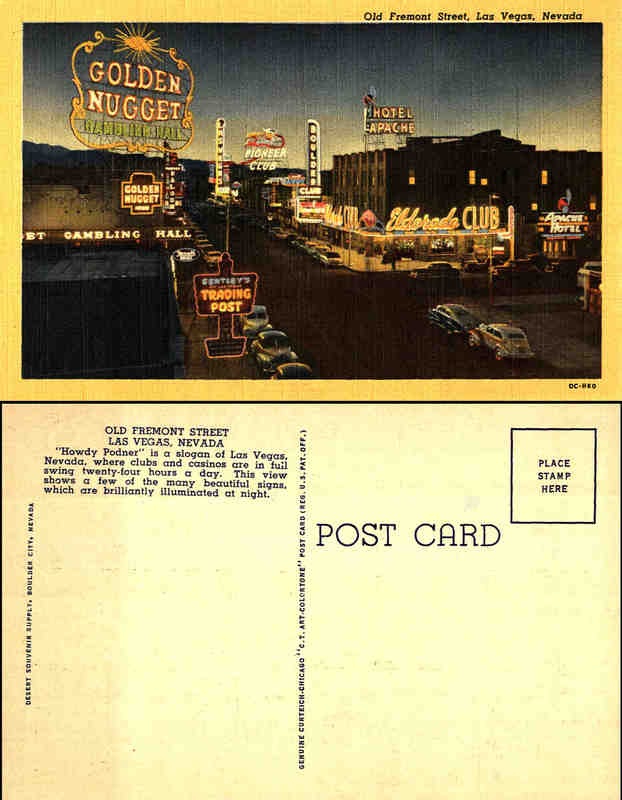 Between 1940 and 1970, the Mafia makes millions of dollars coming from all kinds of criminal operations. Thanks to the casinos, the money is easily laundered, all in cash, to make sure that no one finds the authors of this criminal activity.

Cuba is the first capital of the Mafia; it's in 1959, when Fidel Castro has overthrown Batista, that the mafia chose to settle in Las Vegas. During the Cold war, a nuclear test site was built, the Nevada Test Site. Not really interested at first by the consequences of the tests, the city takes advantage of them to be surnamed "Atomic City".

In 1989, the city tries to attract families with the Circus Circus and the Excalibur. The hotels are very innovative with volcanic eruptions, gigantic aquariums and miniature reproductions of the biggest cities in the world.

The services and activities are increasing, so is the population: this is causing infrastructure problems. These various facilities, as well as the dozens of artificial lakes established in the suburbs, harm the water supplies of the city.

Las Vegas has more hotels than any other city in the world with its 120 000 hotel rooms. Shopping isn't bad either with its huge shopping centers. In 2004, the city welcomed 37.4 millions of visitors.

According to the U.S. Census Bureau, the population of its urban area has tripled in 20 years, counting 1 941 269 inhabitants in 2010. Quite impressive for a land of 906 square kilometers. 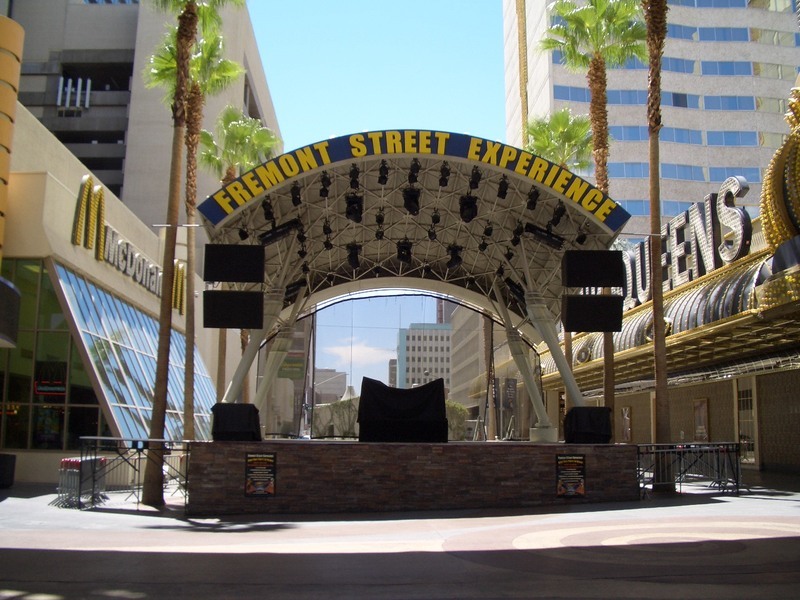 Fremont Street has known a lot of "firsts" in Las Vegas:
- First paved streed in 1925;
- First traffic light in 1932;
- First elevator in the Apache Hotel in 1932;
- First tower (the Fremont Hotel) in 1956;
- First gaming licence at the Northern Club on Fremont Street;
- First casino to install a carpet (Horseshoe);
- First structure designed to be a casino (Golden Nugget).

The important events on this street continued with the Fermont Street Experience of 70 million dollars in 1995, an open pedestrian mall of seven blocks featuring permanent performance stages, live entertaining and an unprecedented sound and light show.

A Street Full of Attractions 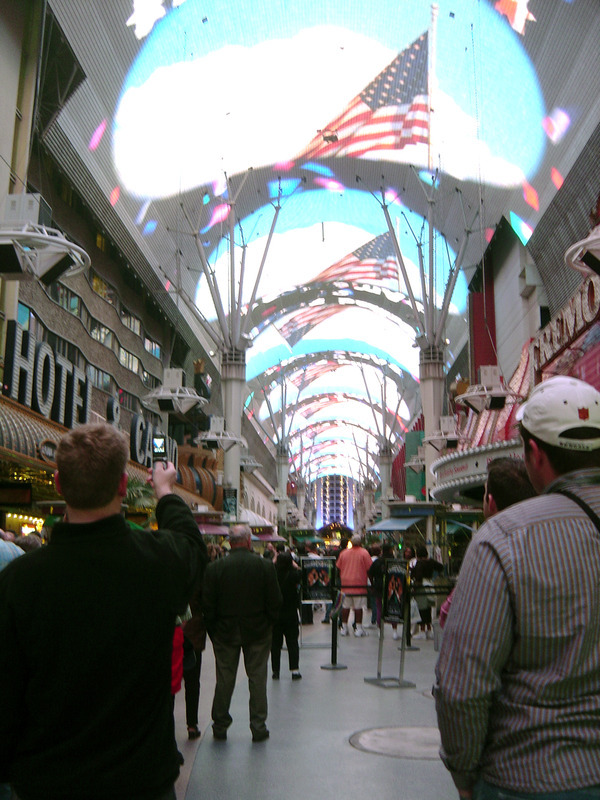 Take a walk on Fremont Street and you will find yourself in poker paradise at Binion's, with a world-renowned shrimp cocktail awaiting you at the block near Golden Gate with a hundred years of age. Legendary casinos, free entertainment: it's the vintage part of Fremont Street Experience. Any night you can see famous bands, dancers meandering or an amazing saxophone performance. Some say it's the history of Fremont Street that makes it famous. The Fremont Hotel opened 50 years ago and launched the carreers of artists like Wayne Newton. Others say it's the service. A dining experience at Hugo's Cellar in the Four Queens is unrivaled. You can't forget the gambling. Determine your luck at The Lady Duck or the D casinos on the slots in town.

You will never run out of things to do in Fremont Street Experience, located in the heart of downtown Las Vegas on the historic street where it all started. Globally recognized, this entertainment facility houses Viva Vision, the biggest screen on the planet. Over 12 million lights and 550 000 watts of concert quality sound in the speakers produce a display of images that will dazzle you and heart-pounding music. The Viva Vision shows appear at night and are free and open to the public. The giant LCD screens 27m above a pedestrian mall with retailer kiosks and two permanent stages. Ten legendary casinos are located on Fremont Street Experience with over 60 restaurants and thousands of slot machines. Free concerts, special events, street performers entertain the 17 million visitors who come to live the vintage experience of Las Vegas every year. Long before Bugsy Seigel designed the Flamingo Hotel/Casino and long before the Las Vegas Strip was full of pirates, volcanoes, castles and pyramids, the urban area of Las Vegas was there. 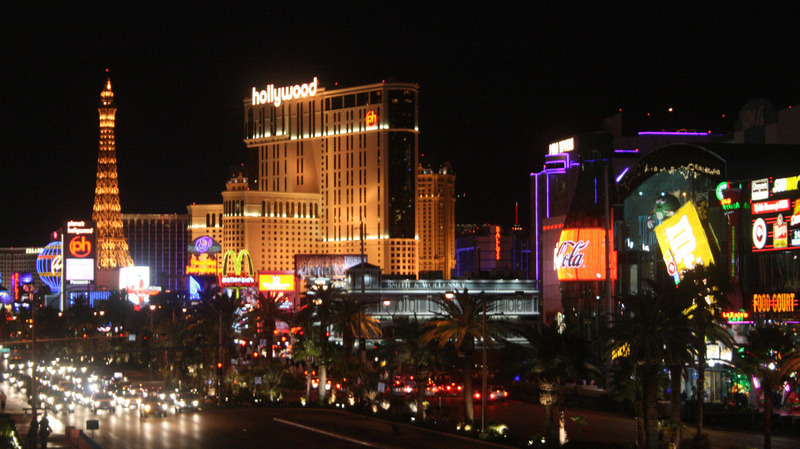 Las Vegas Strip is a 6.7-km road south Las Vegas Boulevard. This boulevard was once called Arrowhead Highway, Salt Lake Highway, U.S. Highway 91 and Los Angeles Highway. It would owe its name to a building on Sunset Strip in Los Angeles.

The Strip starts at the Stratosphere and goes down to Mandala Bay. You can find the famous Welcome to Fabulous Las Vegas sign. Hotels, casinos, resorts, the M&M world, Adventuredome and the Fashion Show Mall. 15 of the 25 largest hotels can be found there, with a total of 62 000 rooms. It's also the perfect place to celebrate New Year's day. Golf courses are also located on the Strip. Four shopping centers and a gift shop allow the shopping lovers to find something to enjoy.

Six free shuttle buses are traveling along the Strip every 15 minutes. The Las Vegas Monorail and the trams of the city also allow you to wander easily. 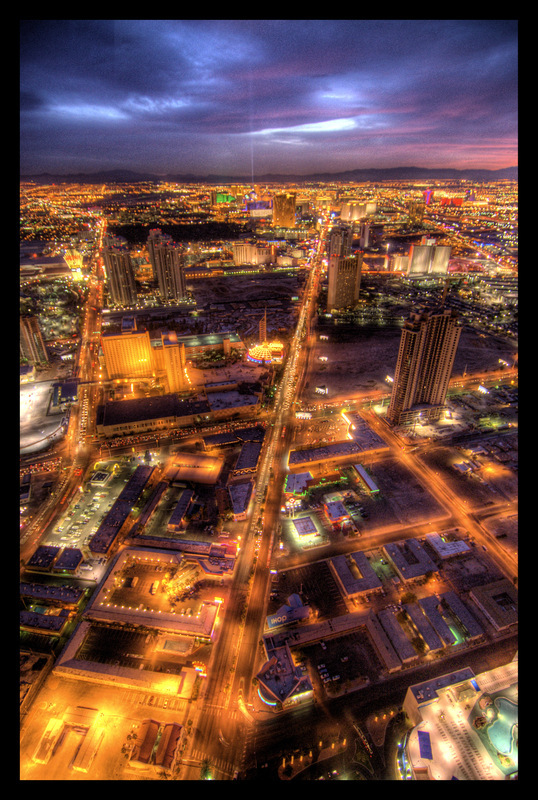 The first casino to be built on the Strip was the El Rancho Vegas, open on April 3, 1941, with 63 rooms. The casino was destroyed in a fire 20 years later. Its success gave birth to a second hotel, the Hotel Last Frontier, in 1942. Well-known figures of organized crime like Bugsy Siegel got interested in the expanding gaming center, which led to the opening of other hotels such as the Flamingo, open in 1946, and the Desert Inn in 1950. The financing of several projects was carried out by the American National Insurance Company.

In 1968, Kirk Kerkorian bought the Flamingo and hired the vice president of the Sahara Hotels, Alex Shoofey, as president. The Flamingo was used to train the future employees of the International Hotel, which was under construction. Open in 1969, the hotel with 1512 rooms started the era of hotel complexes. The International is now called the LVH.

The first MGM Grand Hotel and Casino, owned by Kerkorian, opened in 1973 with 2084 rooms. At that time, it was one of the biggest hotels in the world. The Rossiva Hotel built in Moscow in 1967, for instance, had 3200 rooms. On November 21, 1980, the MGM Grand has undergone the worst fire in a hotel in the history of Las Vegas because of electrical issues, killing 87 people. It was reopened eight months later. In 1986, Kerkorian sold the MGM Grand to Bally Manufacturing, then it was renamed Bally's.

The Wet n' Wild water park opened in 1985 and was located south Hotel Sahara. Il closed in 2004 and was destroyed afterwards.

The opening of the Mirage in 1989 took the Las Vegas experience to another level; smaller hotels and casinos gave way to bigger hotel complexes. These huge facilities offered entertainment and dining, as well as gambling and lodging. The change affected the smaller renowned hotels such as The Dunes, The Sands, the Stardust and the Sahara.

In 1995, after Dean Martin passed away, the lighting of the Strip was subdued in sign of respect for him. The experience was repeated in 1998 to honor Frank Sinatra, recently deceased. In 2005, Clark County gave the name of Dean Martin to a section of the Industrial Road, also in tribute to the famous singer of Pat Rack, actor and comedian from Las Vegas. 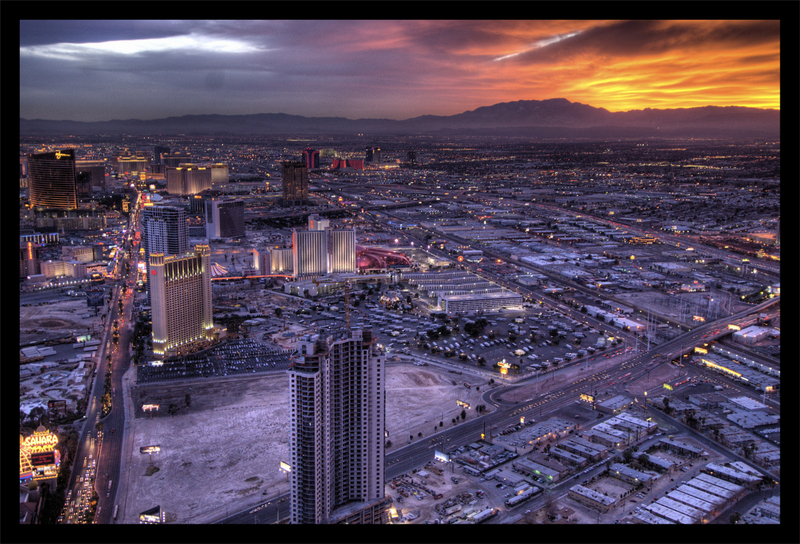 In order to attract families, the hotels started offering more attractions for kids, but the success was limited. The current MGM Grand opened in 1993 with the Grand Adventures amusement park, but the park closed in 2000 due to lack of interest. A similar situation took place in 2003 when Treasure Island close its own arcade.

Following the opening of the Bellagio, Venetian and Winn hotels, the Strip had a liking for luxury in the 2000s, while older hotels were being renovated or extended and changed themes. The gastronomic meals, the specialized retail, the spas a and the clubs became options for the visitors as well as the gambling at the hotels of the Strip. There was also a tendency for expensive residential condos.

In 2004, MGM announced plans for the Project CityCenter, a 66-acre project of 7 billion dollars on the site of the Boardwalk Hotel and the surrounding land. It comprises a hotel, a casino, a condo, stores, art, companies and others. City Center is currently the biggest complex of its kind in the world. The construction started in 2006 and most of the elements of the projects opened in 2009. A new hotel named the Resorts World Las Vegas should open in 2016.