On the edge of the arm of the river, the lands of Rivière-des-Vases, granted between 1776 and 1784, were delimited within the Villeray seigneury. Located between the LeParc fief in Cacouna and the Isle-Verte seigneury, this seigneury was assigned in 1689 and divided into equal parts between these two domains. The same distribution took place on Ile Verte where, in 1874, the islanders inhabited a single parish called Notre-Dame-des-Sept-Douleurs.

Fishing weirs in the channel 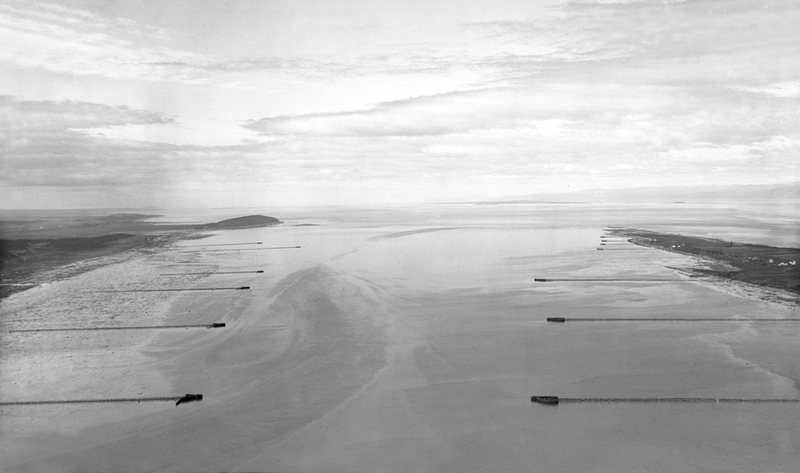 Fishing weirs in the channel separating Île Verte from Rivière-des-Vases, around 1927.

After Europeans arrived in the region, the banks of the St. Lawrence were allocated to seigneurs (lords). When colonization began at the end of the 18th century, the people of Île Verte and Rivière-des-Vases installed their fishing weirs on the wide coastal flats every spring, paying for the right to fish by delivering one-tenth of their catch to the seigneurs. When crops failed or harvests were small, the river’s bounty helped compensate for the food scarcity. The first colonists discovered an environment abounding with all kinds of fish — herring, salmon, shad, smelt, capelin, sardine, halibut, windowpane, tommy-cod, eel and sturgeon.

After the seigniorial system was abolished in 1854, the people on both sides of the channel continued to fish and profited from the trade fishing generated. Each year, the first catches were loaded into barrels on board goélettes (cargo schooners) to be shipped to Quebec. This cash income was a much appreciated supplement to their subsistence living. In 1868, eighteen weirs were made on the foreshore on the south side of the island and twelve at Rivière-des-Vases.

« People of the riverside » 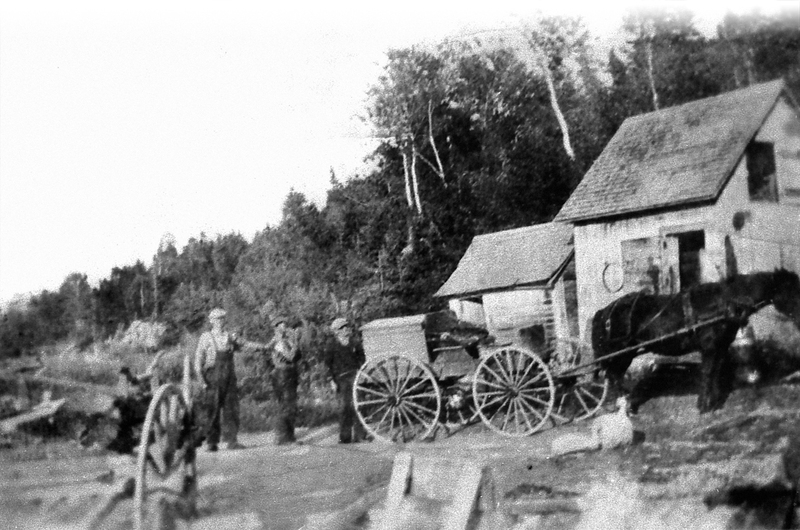 Fishing shed on the riverside.

The pioneer families settled on the first range at Rivière-des-Vases: Beaulieu, Côté, Dubé, Grandmaison, Guichard, Leclerc, Levesque, Marquis, Melançon, Pelletier and Simard. At the turn of the 19th century, these inhabitants were closely dependent on the St. Lawrence River to get from one place to another and derive part of their subsistence. To the extent that in time they were called “gens du Bord-de-l’eau” (people of the riverside). Farmers and fishermen, they spent their days cultivating their parcels of land, putting their animals out to graze on salt herbs along the shoreline, installing their fishing weirs, and salting and smoking their catch. 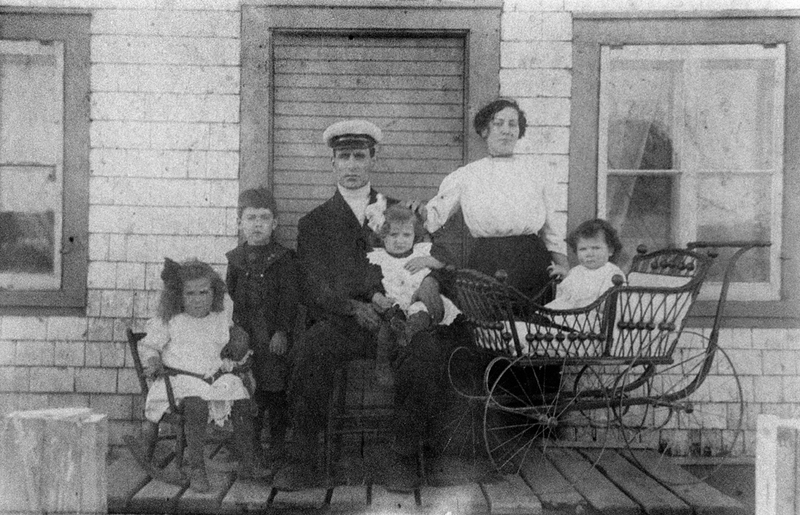 A ship pilot with his family.

A number of families from the Bord-de-l’eau range, whose members were navigators, ship pilots or sailors, such as the Charest, Chassé, Chalou, Petit and Vaillancourt families, and what’s more had to work the land, spent most of the navigation season at sea, carrying merchandise from one place to another or guiding ships from overseas. Between trips, they anchored their schooners in the arm of the river sheltered in the western tip of Ile Verte, whereas master pilots hauled their numbered boats on the shore. In the last days of fall, Charles Hambelton, the first lighthouse keeper on Ile Verte, turned off the “light” and went to be with his family, who lived at Rivière-des-Vases.

From trails to King’s Highway 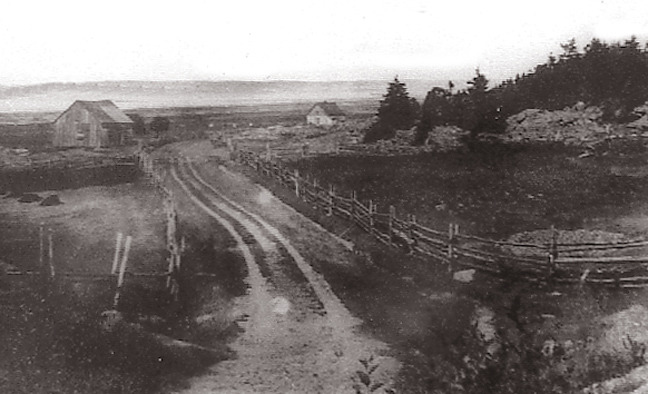 The peasants cleared their land and cut trails to get from one property to another or from Cacouna to Isle-Verte. In 1798, the new King’s Highway was officially opened and still follows the same route today. 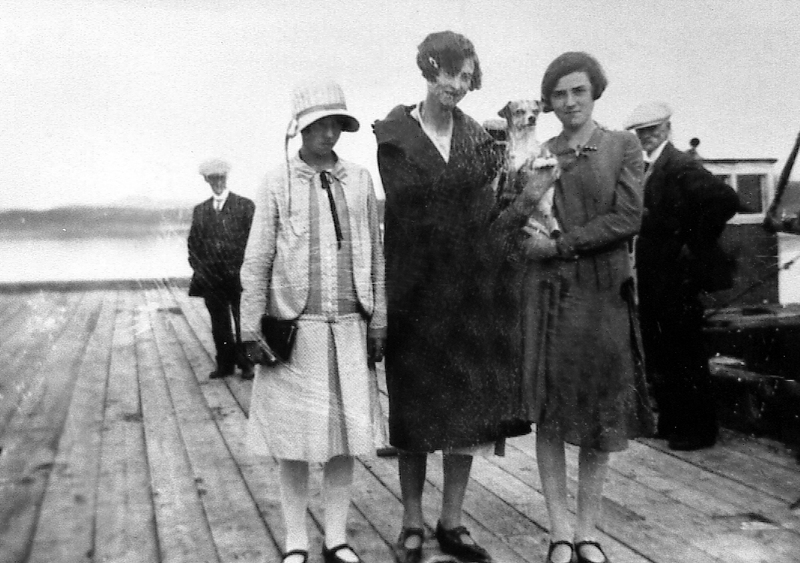 Passengers of the scow just boarding at the Didace quay, circa 1940.

Constructed in East Cacouna in 1914, the quay was named after Didace Côté because it was built on the edge of his land. It was primarily used by residents of the western end of Ile Verte as a permanent parking spot for their cars. The islanders would cross over by scow and then take their car into “town” to do their shopping. The quay was also used by a few small schooners to underload cargo. Over time, there less and less activity and the structure finally fell into complete disuse in 1980. 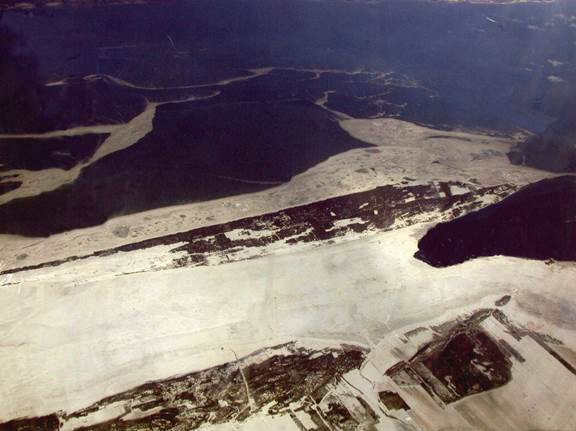 The ice bridge between Rivière-des-Vases and L’Île Verte.

When the cold weather arrives in December and January and the ferry stops running, the islanders impatiently wait for the river to freeze over and form an ice bridge. For the next few months, the island is linked to the continent and spruce branches are used to mark a path over to the other side. However, the ice must be carefully checked to make sure it is thick enough to cross. Stories have been told about how islanders lost their horses and sleighs from falling through the ice. 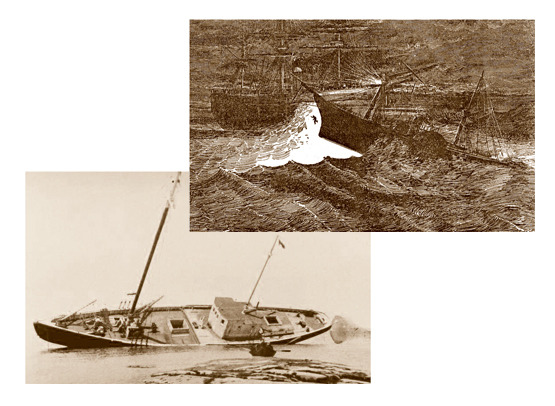 Left, the Ellen and Mary wrecked on les Couillons near the lighthouse, in 1942.
Right, collision of the Germany with the City of Québec (steamers), during the night of May 2, 1870.

In the 19th century, fog, storms, ice and human error caused a number of shipwrecks (more than 100 at Ile Verte). Here, the cold Labrador Current mixes with the warmer waters of the St. Lawrence and Saguenay rivers, often producing fog, and back then, when ship captains could hardly see the bow from the stern, it was even harder to spot reefs and shoals surrounding the islands. And the navigation aids (lighthouses, beacons, cannons, foghorns) installed over the years did not prevent some ships from running aground. Heavy windstorms sometimes made it impossible for sailing ships to anchor in the shelter of the islands and tossed them onto shore. In addition, early freezing in winter created ice floes that would lock ships in and pound their wooden hulls until the ship sank. 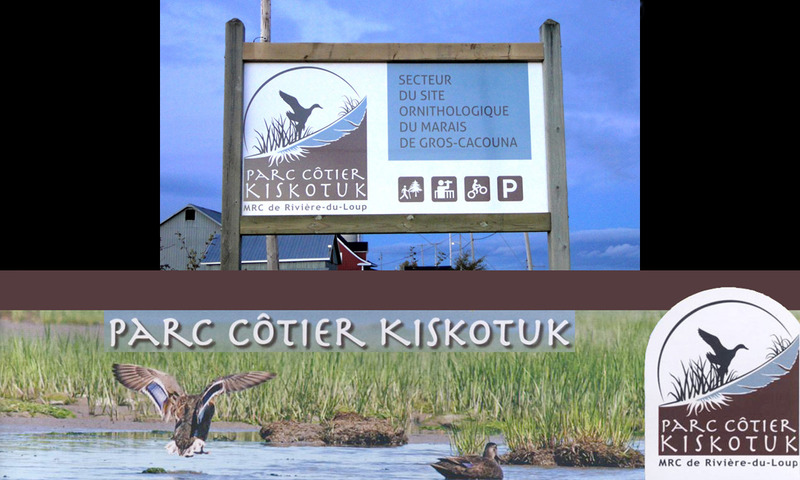 A park connected with nature.

Parc côtier Kiskotuk is nearly 30 kilometers of breathtaking coastal scenery – where the St. Lawrence Estuary, mountains, marshes and islands come together in perfect harmony with farms and fields. The park is organized around seven Discovery Areas distributed along the coast in the municipalities of Cacouna, L’Isle-Verte and Notre-Dame-des-Sept-Douleurs (île Verte) in the Bas-Saint-Laurent region of Québec.

Come fall under the spell of the St. Lawrence and breathe the salt breeze off the estuary as you enjoy the many outdoor activities available in the park or stay in the cabins and campsites surrounded by captivating landscapes !