A view of Gros-Cacouna (island during high tides), circa 1900.

The peninsula across from the mouth of the Saguenay River, not far from Ile Verte, used to become an island during high tide in fall and spring. In summer, Native people came to fish and hunt seal. They named the place Kakoua-Nak, or “land of the porcupine,” no doubt because of the wildlife that inhabited the site. Artefacts discovered in a rock shelter at the foot of the cliffs in 2006 testified to the site’s use by Native people. 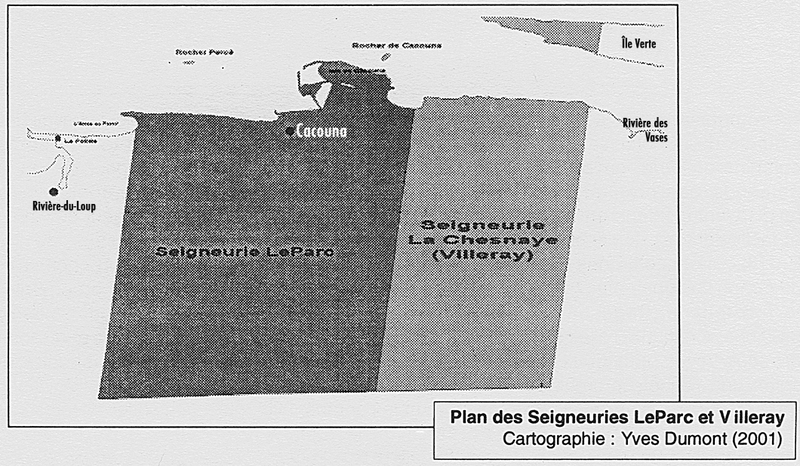 Plan of the LeParc and Villeray seigneuries.

In 1673, the Isle de Cacona and surrounding lands were granted to André Daulier DuParc. The LeParc seigneury measured two leagues wide by two leagues long and extended from Anse au Persil to the eastern tip of the Cacouna peninsula. The fief was subsequently purchased by Charles Aubert de la Chesnaye, owner of the Rivière du Loup seigneury. In 1689, La Chesnaye enlarged his domain through the grant of one half of the land remaining between the LeParc and Isle Verte seigneuries. 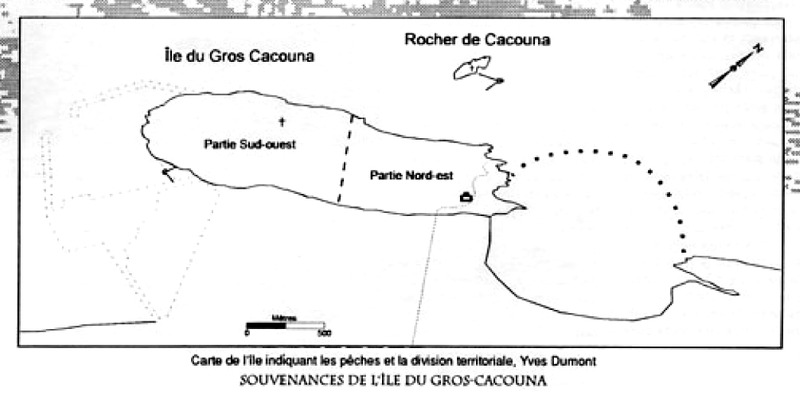 Map of the island illustrating the fisheries and the territorial divisions. The dotted line is the porpoise fishery.

The seigneury remained uninhabited for years. Around 1760, some fishermen from Kamouraska were put in charge of the porpoise (offshore) and weir fisheries that supplied fish to the seigneur, James Murray. They built cabins on the northeastern tip of the island. In winter, Acadians fleeing deportation during the “Great Upheaval” found shelter there. Three years later, this farmable part of the Isle de Cacona was granted to Philippe Asselin, a farmer. In 1795, Henri Sérien dit Langlais, from Rivière-Ouelle, has been the first fisherman-farmer to settle there with his family.

1765. Acadians and the first hamlet 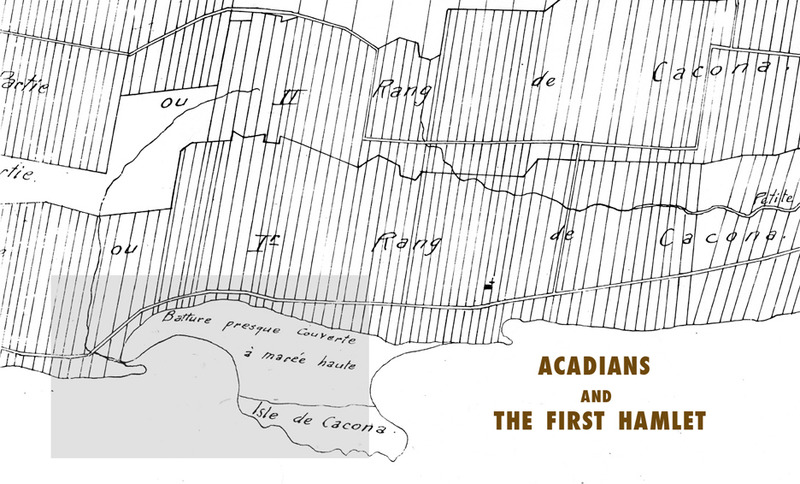 Map showing the area where the first settlers opened the way to the first hamlet, called “Cacona”.

Colonization truly began in 1765 when Acadians settled in the area: the Saindon, Bergeron, Gaudin and Guichard families. They cleared the land on the edge of the marshes across from the peninsula and were later joined by fishermen, seamen and farmers, mostly from parishes upriver. This part of the range was known as the first hamlet, called “Cacona”, and the 45 tenants ground their wheat at the small seigneurial mill nearby. In 1789, the house belonging to Jean Saindon (son of Michel) served as a chapel for the first settlers. When the King’s Highway opened ten years later, communication became easier and land opened up on the first range on the shores of the St. Lawrence River. 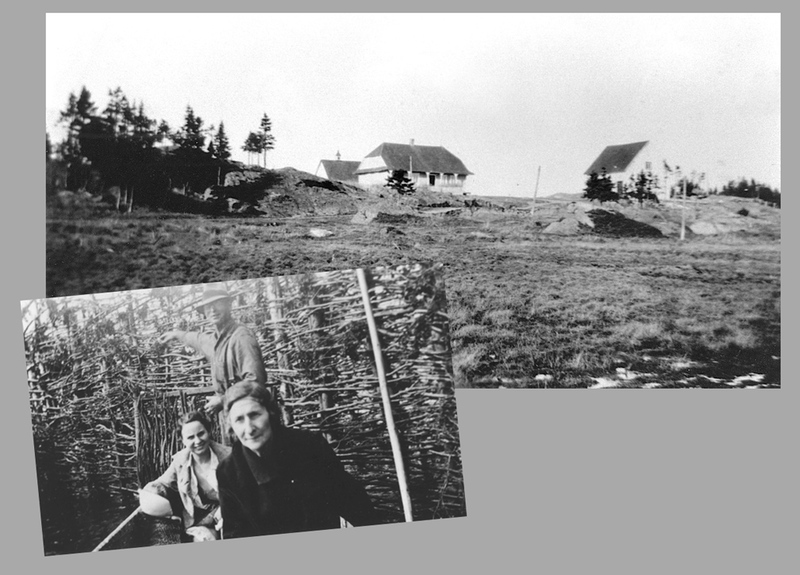 The house of the island, circa 1930, and the Beaulieu’s inside their fishing weir.

In the mid-19th century, the Isle de Cacona was renamed Gros-Cacouna to differentiate it from Cacouna, the village. The reef on the north side was named Petit-Cacouna, or the islet. After the arrival of the Hudon dit Beaulieu family, the locals started calling the place “île des Beaulieu”. 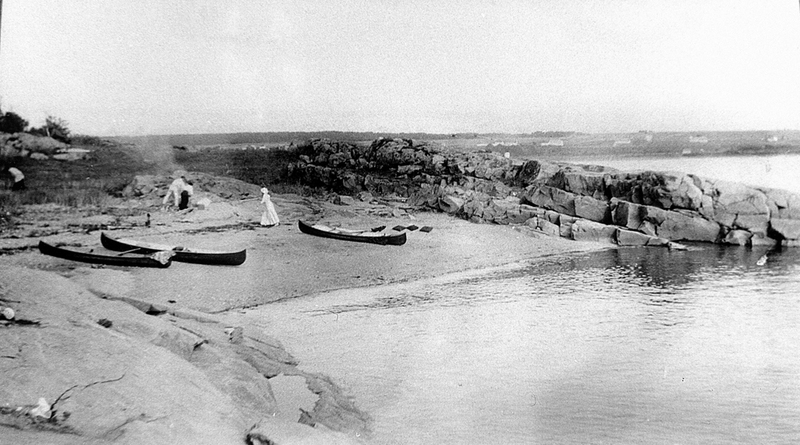 Small beach on the southwestern end of the peninsula and picnic, circa 1900.

In days of yore, sailing ships would anchor in the harbour to take shelter from strong winds. In 1851, the Saguenay Line steamship Rowland Hill emptied its passengers into small boats to go visit Cacouna, by then a seaside resort. At the time, tourists would pull their canoes up on shore and go for a swim at one of the small beaches on the southwestern end of the peninsula. Sometimes they would stay for a picnic and some line fishing or small-game hunting. 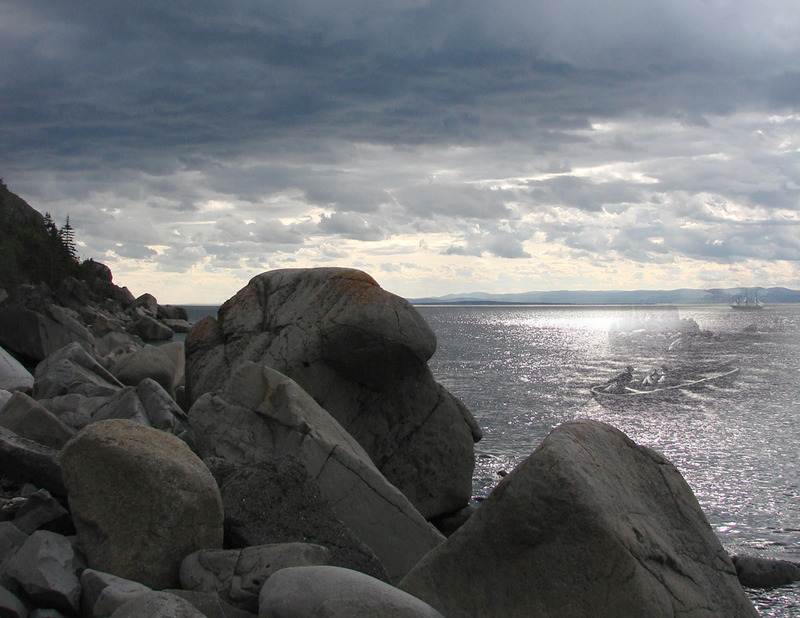 Photomontage showing the rocky north face of the island with the ghostly presence of old boats.

During the 19th century, there were around fifty shipwrecks and collisions between sailing ships and certain steamers ran aground in the Cacouna area, between the western tip of île Verte and Anse-au-Persil. Unfortunately, some ships were completely lost, including the brigantine Maria, in 1812. Most of the Gros-Cacouna shipwrecks occurred in the fall during the month of November. In 1842, the George Ramsay ran aground to the north of the peninsula. Several schooners struck the rock of Cacouna, or islet, including the Better Luck, in a raging blizzard in 1829; ten years later, this was also the fate of the Marie Victoria. In 1853, the cold weather meant that ice formed early imprisoning several vessels, one being the Norwegian bark Ballengeich. The schooner Marie Rose was completely lost in a snowstorm in 1886. Several shipwrecked people were rescued by the inhabitants of Gros-Cacouna and île Verte. 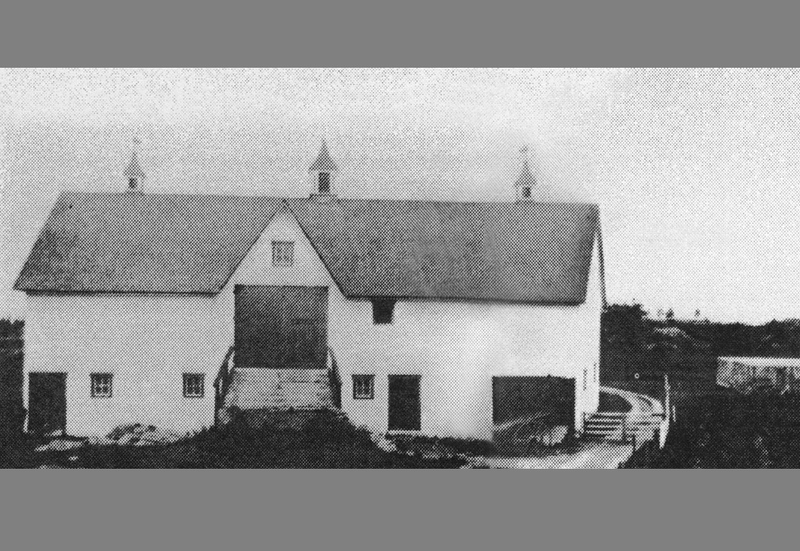 The Beaulieu’s barn, circa 1930, with the entrance to the saltworks on the right and view of the island’s small northern path and gate.

During the First World War, Gros-Cacouna was used as a hiding place for men trying to avoid being drafted. They took refuge in a shallow cave to the north of the island, under the protection of the Old Lady of the rock. These fugitives could count on the charity of Wilfrid Beaulieu who provided them with food.

The island not only served as a haven for conscription evaders however: during Prohibition, smuggling schooners from Saint-Pierre-et-Miquelon jettisoned their merchandise there when being chased by customs officials. The square drink canisters were thrown into the fisheries near the island of Cacouna, and Wilfrid and Camille Beaulieu didn’t just catch fish. They stored their catch in the double wall of the saltworks until such time that the trafficker could come to recuperate it.
(According to the testimonies of Jeanne Beaulieu-Dubé, Isabelle Beaulieu-Caron and Ida D’Amours.)