From croquet to golf 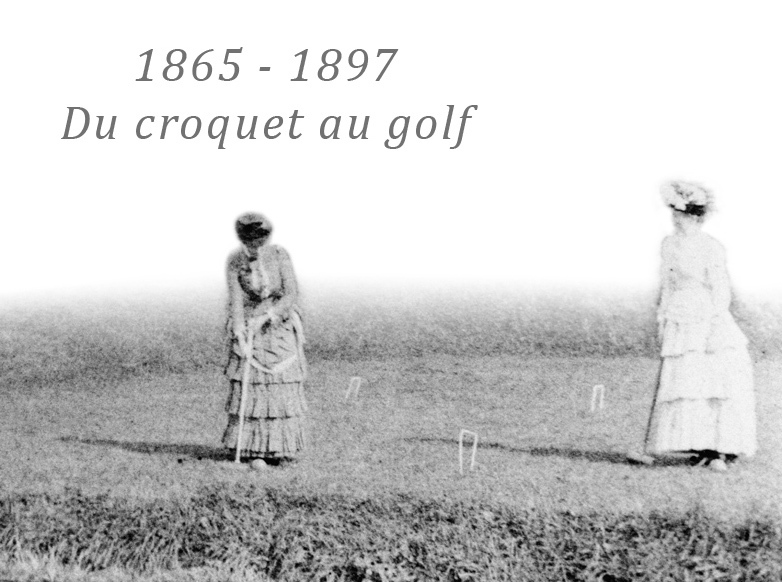 In summer, Cacouna’s verdant golf course overlooking the St. Lawrence River is coveted by amateur golfers. Such sport get-togethers have been popular in Cacouna for over a century. Traditionally, the mostly English Canadian vacationers spent their holidays playing outdoor games. As early as 1865, well-to-do customers of St. George’s Hotel (St. Lawrence Hall) strolled on the lawns and trails carrying their clubs so they could hit their balls between arches. Croquet and lawn billiards, a game related to golf, were played by both men and women. In the late 19th century, the Scottish game of golf became increasingly popular, so much so that some local people had a small link built near their villa. The chief justice of the Superior Court of Québec, Sir William C. Meredith, was playing golf even before the Saint-Patrice golf club was established in 1902. 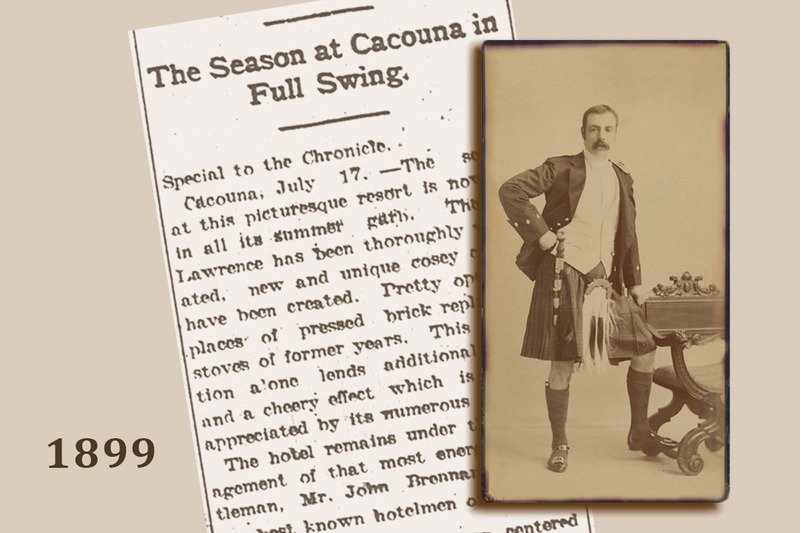 Sir Montagu Allan, one of the founding members of the Cacouna Golf Club.

In 1897, a number of vacationers played golf on farmland on the edge of Cacouna. Two years later, at the start of spring, a well-known summer resident, Sir Montagu Allan, hired an expert from New York to build a nine-hole golf course on a piece of land leased from farmer Louis Lebel. The July 12, 1899, issue of the Quebec Morning Chronicle announced the opening of the new golf course, saying that summer was “in full swing”. 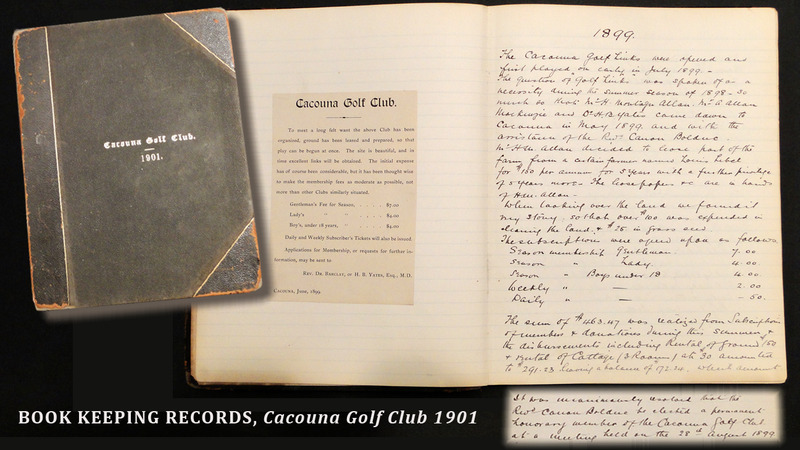 The first Cacouna Golf Club Book of Records, dated 1901, but covering first activities of 1899, reveals some interesting facts about the beginnings.

To meet a long felt want, the above Club has been organized, ground has been leased and prepared, so that play can be begun at once. The site is beautiful, and in time excellent links will be obtained. The initial expense has of course been considerable, but it has been thought wise to make the membership fees as moderate as possible, not more than other clubs similarly situated.

We can also read this little mention : « It was unanimously resolved that the Rev. Canon Bolduc be elected a permanent honorary member of the Cacouna Golf Club at a meeting held on the 28th August 1899. »

On the right page of the Book Keeping Records’ photo above, we can notice that, sooner in May, the Rev. Canon Bolduc assisted members of the Golf comittee « to lease part of the farm from a certain farmer named Louis Lebel for $150 per annum for 5 years with a further privilege of 5 years more. » The owner being French Canadian and Canon Bolduc, bilingual and very familiar with all the farmers, we understand easily that his presence was of great help and why the Comittee wanted to thank him officially. 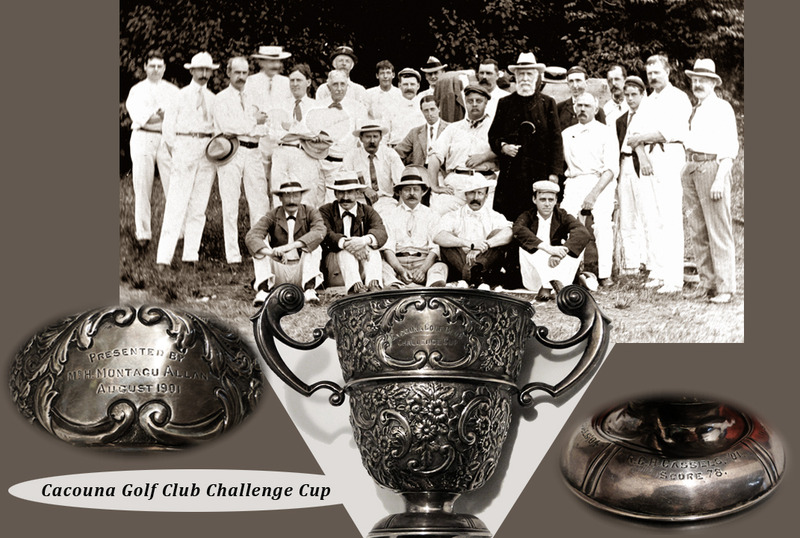 Sir Montagu Allan surrounded by cottagers and sportsmen from Cacouna.

As registered on this silver cup, it was Sir Montagu who put in play the «Cacouna Golf Club Challenge Cup» in 1901. It was the subject of a competition with handicap, to be held over 3 years and addressed to season subscribers. By the 4th year, the winners of the previous 3 years had to compete for the honour of who would keep the trophy in a new independent competition. At the foot of the cup, we can see the names of these winners: 1901 (R.C.H. Cassels, score 78), 1902 (W.S. Clouston, 5 up and 3), 1903 (John Hamilton) and the final winner, 1904 (R.C.H. Cassels). An equivalent trophy, in the form of a silver vase presented by Lady Allan, wife of Montagu, had also been contested by the ladies and won in the end (1904) by Miss Marlin, who had won the first year (1901), followed by Miss Paterson (1902) and Miss Montizambert (1903).

The founding members of the Cacouna Golf Club, H. Montagu Allan, H. Allan MacKenzie, R. M. Stocking, Reverend Dr. Barclay, Dr. H. B. Yates and E. B. Greenshields, and all their subscribers could now show their skills on one of the prettiest golf courses in the region. They hit their balls around bushes and the 25 sheep that maintained the course. The farmer gave them two rooms in his house to store their equipment. The St. Lawrence Hall (owned by R. M. Stocking) even provided its customers with golf clubs so that they could play. 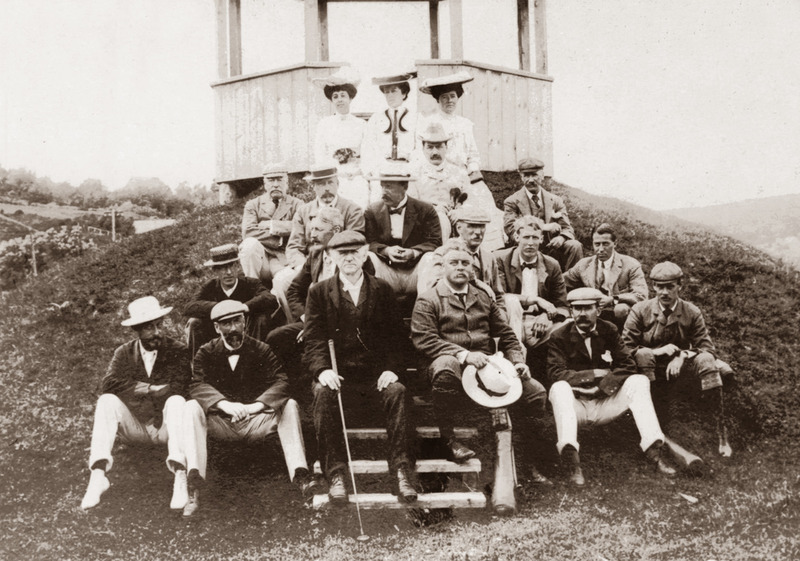 « On Monday morning July 25th 1904, Lt. Col. F.C.Henshaw captained a team of seven golfers from the Murray Bay Links. They arrived Sunday evening by boat. There being no good hotel, the visitors were entertained by Sir Montagu Allan, Mr. A. A. Allan, Mr. Cassels and Dr. Yates. The American system of scoring by points was agreed upon.

Dr. Yates entertained both teams to luncheon after which a photograph was taken and the visitors returned by boat. 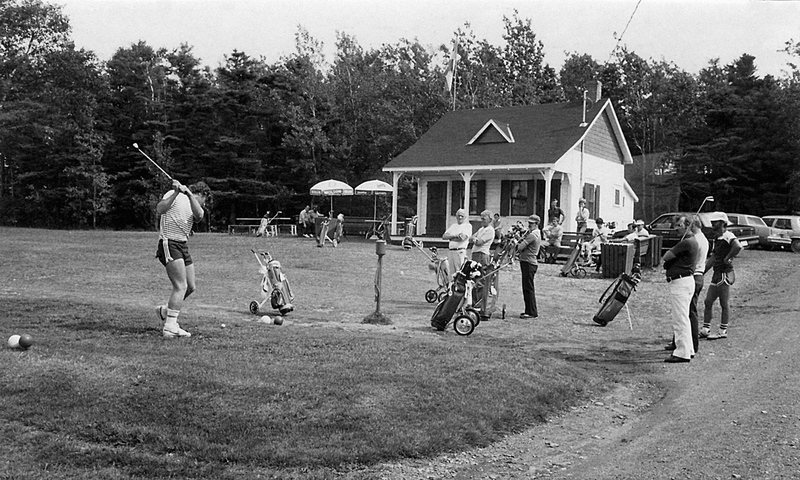 Players all set for the fall 1982 golf tournament, in front of the Club House (built circa1947).

Twenty years after the golf club purchased property in 1927, a club house was built for members and their families and friends. The young people of Cacouna learned the basics of the game, along with a few words of English, and earned some money working as caddies. 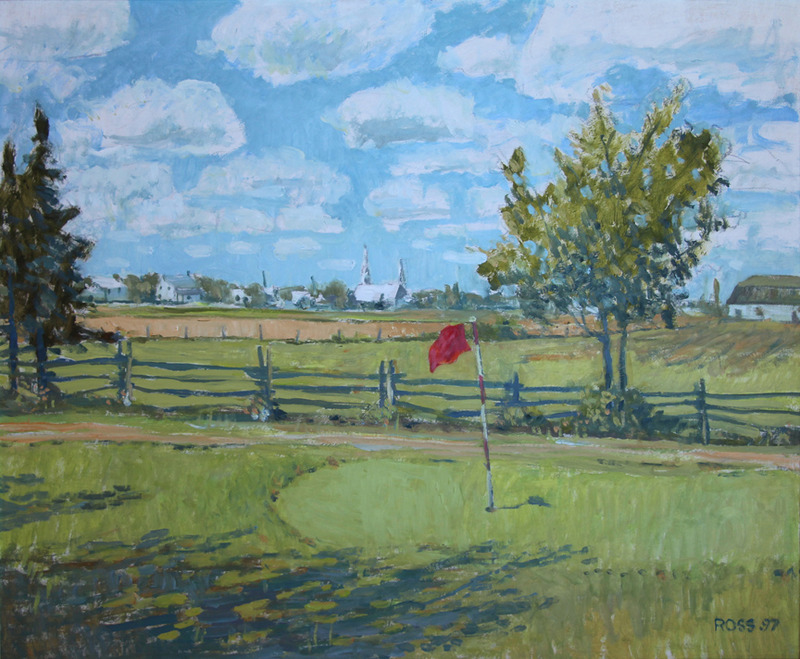 Artist view of the local church area from the golf course, a Graeme Ross painting.

In 1982, the private company transferred the golf course to a non-profit corporation run by locals. Three years later, a magnificent club house was built and, today, golfers can test their skills on the 9-hole golf course.

Photo Source:
Cacouna Golf Club. Painting donation of the artist Graeme Ross, for the centennial (1897-1997) of the Cacouna Golf course. 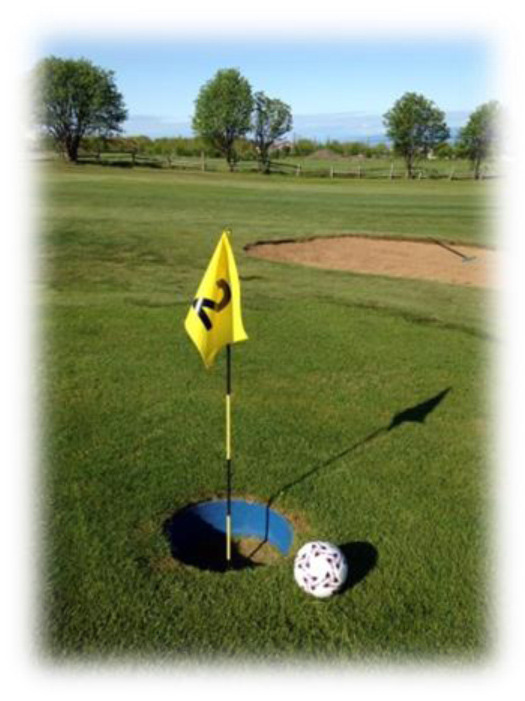 FootGolf was born in the Netherlands in 2009. It began with a group of amateur soccer players who would practise kicking by aiming at the flags on a local golf course. The idea caught on quickly and the first FootGolf tournament was organized.

In 2012, the 1st World Championship was held in Hungary and 17 countries took part. The Federation for International FootGolf now has 22 member countries including Canada, the United States of America, Argentina, France, and Spain.

FootGolf closely resembles traditional golf, but is played with a soccer ball and indoor or turf soccer shoes. The holes are obviously shortened than for traditional golf. An 18-hole FootGolf course was built on land in Cacouna in 2015, where one can play par 3s (50-100 yards), par 4s (100-160 yards), and par 5s (160-200 yards). To increase the challenge, the course uses bunkers, changes in elevation, and shrubs. The aim of the game: to kick the ball into holes of 21 inches in diameter in as few shots as possible.