The locality of Fontaine Claire 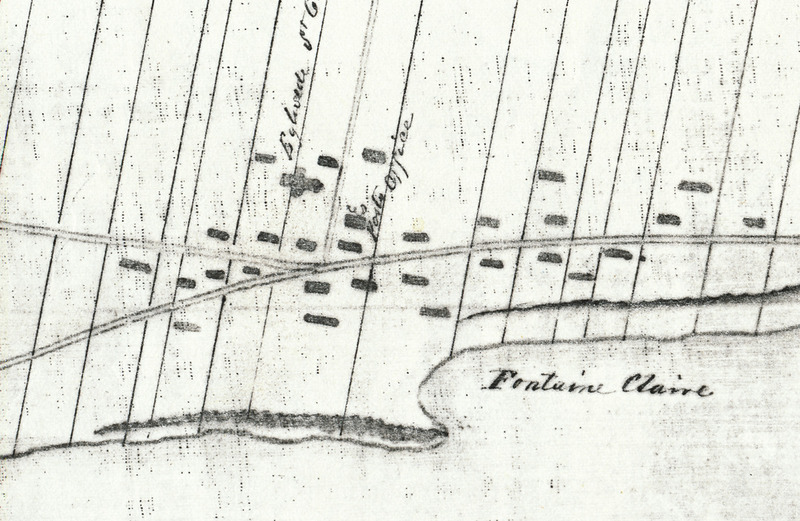 The Fontaine Claire cove not far from Gros-Cacouna is situated almost midway along the first concession road on the shores of the St. Lawrence. Around 1766, fishermen erected a fountain over one of the springs at the foot of the escarpment.  Ships putting in to load barrels of salted fish replenished their supply of fresh water at this fountain.

The area was always bustling with activity, as settlers regularly came down to the shore from nearby farms to get water from the fountain. It came to be known as “Fontaine Claire”, the name first given it by fishermen and sailors.

It was not until 1810, with the construction of the church on a sandy hill, that the village began to take form. Artisans, merchants and gentry settled around the church, not far from Fontaine Claire. 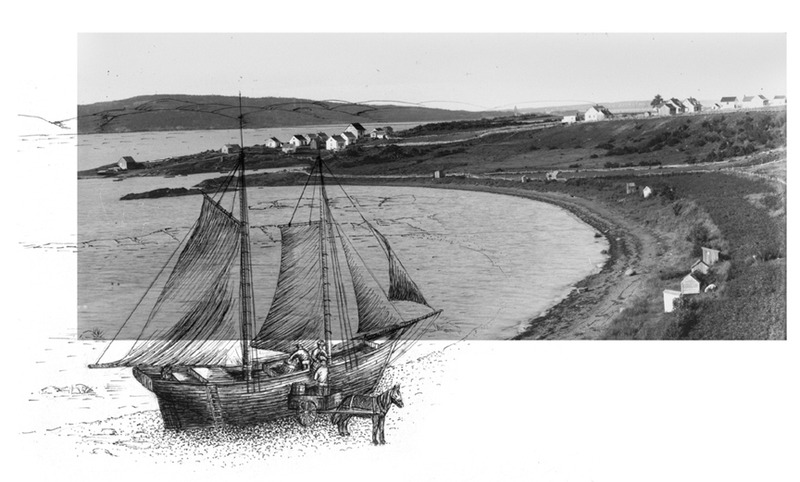 The cove at Fontaine Claire served as a natural harbour.  At low tide, flat-bottomed schooners could beach on the sandy flats.  Because their heavily loaded carts could reach them without sinking, settlers were able to load and unload boats here even before the quay was built in 1891.

A public road to the Fontaine Claire harbour, called Chemin de la Grève, was opened in 1838.  Among the fishermen, carters, mariners and ship’s captains who settled close to the harbour were the family names Dutremble, Desrosiers, Verret, Nadeau, Vaillancourt, Gauthier dit Larouche and Chartier.  These boatmen shipped goods ordered by merchants, as well as local products, to and from the Quebec City market.

Route du port and its artisans 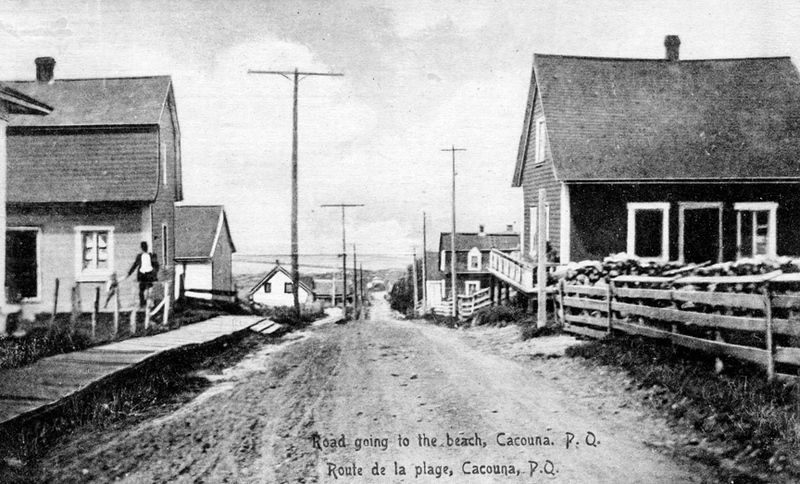 Houses of the road leading to the cove.

In the second half of the 19th century, Chemin de la Grève was renamed Route du Port.  Many artisans, including cobblers, carpenters, cabinetmakers, blacksmiths, bakers, stylists, seamstresses and tailors, set up shop along the busy road to meet the needs of villagers and summer residents. 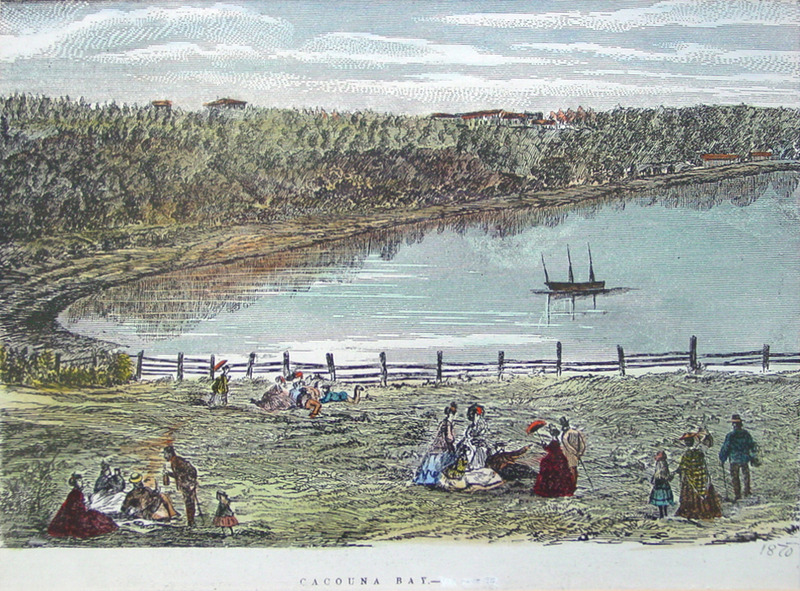 During the summer holidays, the Fontaine Claire cove was popular with tourists for strolls and picnics.  Here they could watch the schooners come in, or embark for a cruise to the islands or the North Shore.

From 1890 to 1920, the federal government had quays built along the St. Lawrence River to help local shipping.  In Cacouna, the headland at Fontaine Claire was chosen as the ideal site for the quay.  Work began in 1891, under the supervision of engineer Alfred Michaud.  A carpenter from the Route du Port, Felix Chartier, directed the Cacouna workmen who built the wooden framework.

Most of the schooners owned by the Cacouna merchants and sea captains were built in Charlevoix.  At least three were built at Fontaine Claire : The Notre Dame de Bonsecours (1867), the Marie Victoria (1885) and the Marie Bertha (1887).

Activities at the Quay 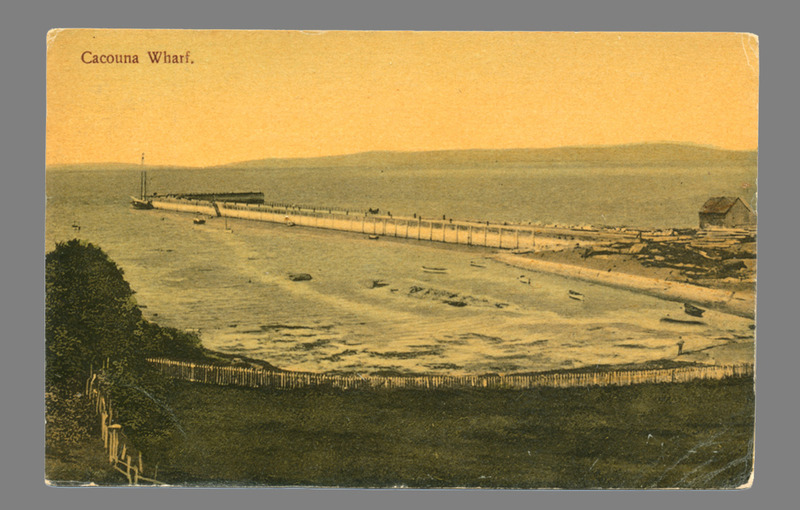 The quay as seen from the Fontaine Claire bay, first quarter of 1900.

The quay was mainly used by schooners, yachts and the occasional steamer.   The arrival of every boat was the occasion to watch the carters hired by local merchants and farmers pick up provisions such as flour, molasses, sugar or biscuits, while others delivered potatoes, wood, shingles and other local produce to be shipped out.  A federally-appointed warden collected wharfage and transhipment charges, and also saw to annual maintenance and repairs.

Time and the elements took their toll on the wooden quay, which was partially replaced by a concrete structure with steps and mooring posts.

The Quay is demolished in 1986 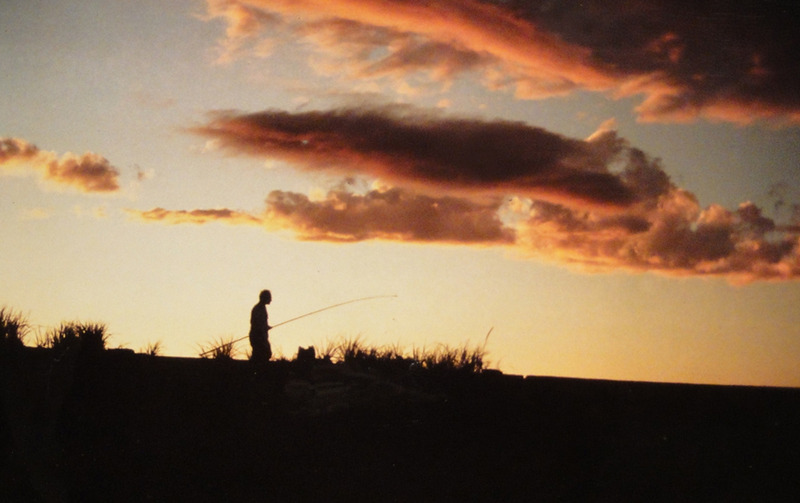 Fisher on the abandonned quay in the seventies.

With the decline of river shipping, the coastal trade died out and the Cacouna quay, like so many others, fell into disuse and abandon.  Used only by smelt fishers after closing in the 1960s, it was demolished and replaced by a small stone breakwater in March 1986.  Port activities were transfered to the Gros-Cacouna seaport. 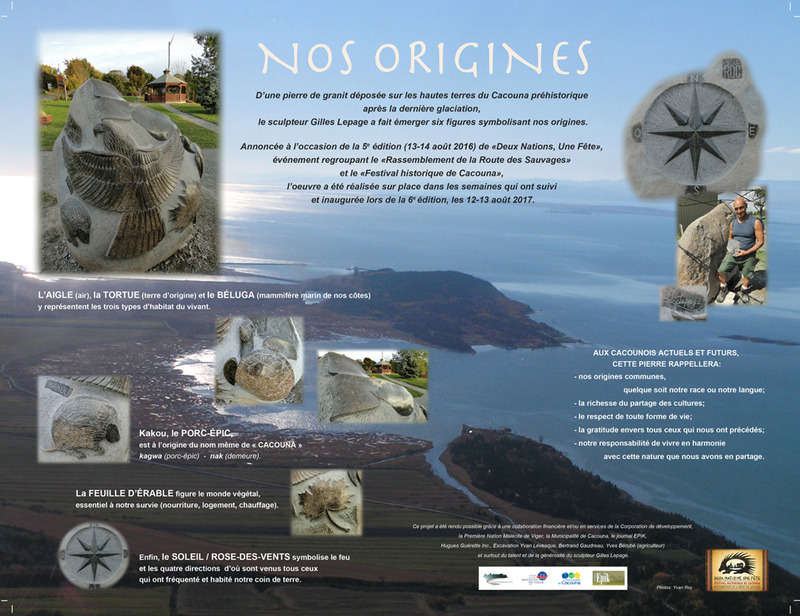 Interpretative panel near the sculpture, between the Maliseet of Viger First Nation (MVFN) Administrative Center and the Fontaine Claire Park.

From a granite stone deposited on the uplands of prehistoric Cacouna after the last ice age, six figures symbolising our origins emerged under the skilful hands of the sculptor Gilles Lepage.

First announced on the occasion of the 5th edition (August 13-14, 2016) of Deux Nations, Une Fête, an event bringing together the Rassemblement de la Route des Sauvages (Annual Pow-Wow of the Maliseet of Viger First Nation) and the Festival historique de Cacouna (Cacouna’s historic festival), the sculpture was created on site during the following weeks and officially inaugurated during the 6th edition (August 12-13, 2017).

Kakou, the PORCUPINE that is at the very origin of the name Cacouna, is certainly present.
The EAGLE (air), the TORTOISE (earthly origin) and the BELUGA (marine mammal of our coastlines) represent the three types of habitat of the living.
The MAPLE LEAF illustrates the plant world, essential to our survival (food, dwelling, heating).
Finally, the SUN / WIND ROSE symbolizes fire and the four directions from which those who have frequented and inhabited our corner of the earth have come.

This stone will serve to remind us, and future generations, of:
- our common origins, whatever our race or language
- the richness of sharing cultures
- the respect of all forms of life
- the gratitude towards all those who have preceded us
- our responsibility to live in harmony with nature and the world that we share. 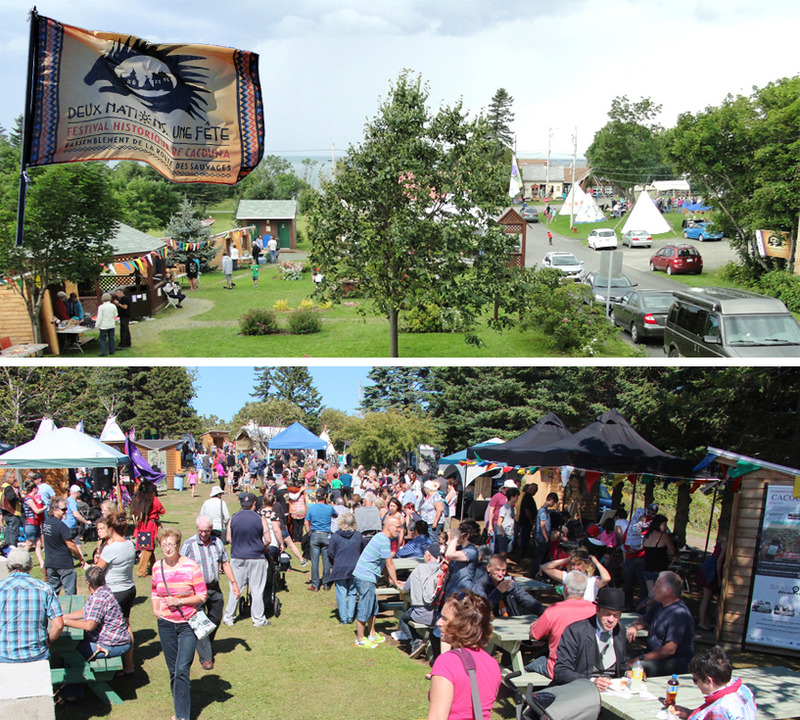 The flag of the event flies over the festival since the twinning project in 2012, with the 2015 and 2017 editions pictured here.

Since mid-August 2009, the Maliseet of Viger First Nation has organized an annual Pow-Wow, called Rassemblement de la Route des Sauvages, on and near the Reserve.

In 2012, with the aim of promoting the history and culture of Cacouna, and drawing on the strong presence of two Nations and two cultures on our soil representing such a rich heritage, a joint committee was formed. Its goal: to bring together in a single event the annual Maliseet Pow-Wow and a local historic festival in order to promote and share the traditional know-how of our two cultures.

On August 17, 18 and 19, 2012, «Deux Nations, Une Fête» (Two Nations, One Event) was held for the first time. It took place at the foot of rue du Quai with its artists, artisans and local entertainers grouped around the Fontaine Claire Park on one side, and the First Nations Pow-Wow along with numerous demonstrations and workshops, and artisans of various origins assembled on the Reserve and adjacent land on the other.

Since 2017, the free event is held on the large tip of the old wharf extending from the Reserve, with tipis, stands of artists and artisans, and tents, where the two nations can share their know-how. Songs, dances, tastings, demonstrations, workshops, and entertainment succeed each other during the 2 afternoons of the event.