Wulust’agooga’wiks – People of the Beautiful River 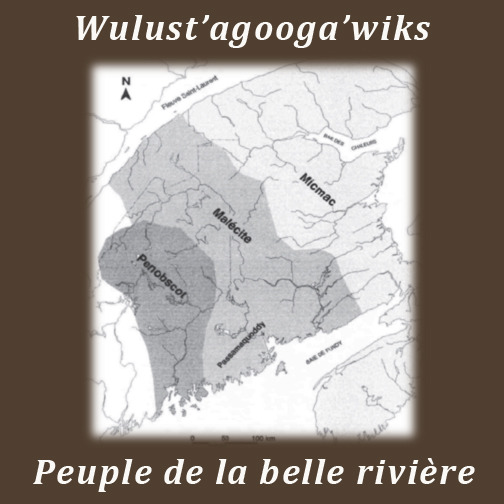 The ancestral territory of the Maliseet, before 1800.

The Maliseet are members of the Wabanaki Confederacy (along with the Penobscot, Passamaquoddy, Abenaki of Maine, and Mi’kmaq nations) and, for this reason, have often been confused with the other members of their confederation. Indeed, the French called them Passamaquoddy, referring to the place where several Maliseet people lived, in the valley of the Passamaquoddy Bay. They have also been nicknamed Etchemins. Their territory extended between Lévis and Rimouski between the St. Lawrence River and the Atlantic coast of New Brunswick. Their main means of travel was by navigable waterways. They were quickly acknowledged as masters in the art of the construction, navigation and portage of canoes. Their preferred river was the Saint Jean River or ‘Wolastoq’, where their name comes from. The presence of the Maliseet on this vast territory probably dates back at least one thousand years.

The 1800s … Attempts at Establishment 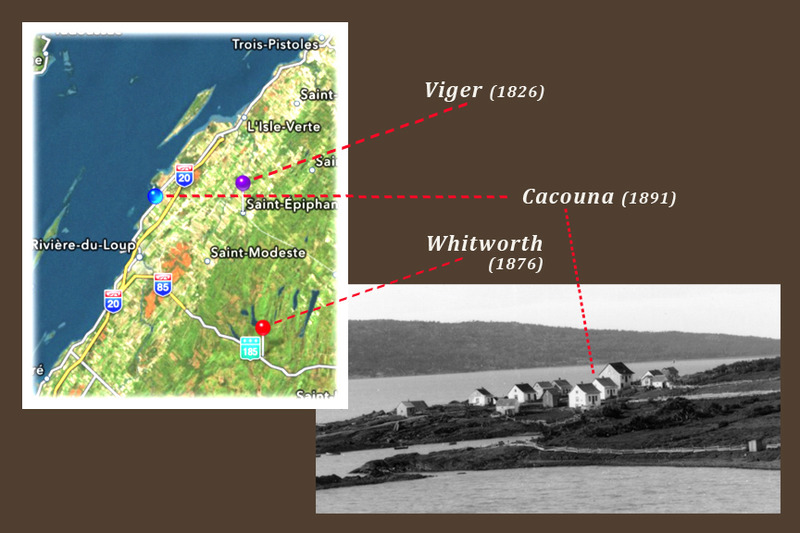 Location of lands in Viger, Whitworth and Cacouna.

This nomadic people frequented the riverside areas in the summer to fish and hunt. At the beginning of the 19th century, the Maliseet camped during the summer months at the mouth of the Green River and went up to the woods for the winter.

In 1826, some thirty families formed an establishment in the township of Viger, hence the current name of Maliseet of Viger. It was one of the first concessions of land granted to aboriginal people in the province of Quebec. The granting of this land was, however, contested by the neighbouring population, who requested that the Canadian government recover it.

The men were not particularly interested in cultivation, preferring hunting, which didn’t bring in much money as game became scarcer. The women spent their time picking berries in the summer and making useful baskets from bark that they sometimes sold to the locals. During the winter, this poor, deprived nation was often afflicted with various illnesses.

In 1869, the Maliseet had to cede their land, and lots were sold off at auction the following year.

In 1876, the federal government created the Whitworth community (about 25 km south-east of Rivière-du-Loup). The Maliseet tried in vain to cultivate this land which was unsuited to cultivation. They finally abandoned it and settled around Cacouna, where they would live for several generations. 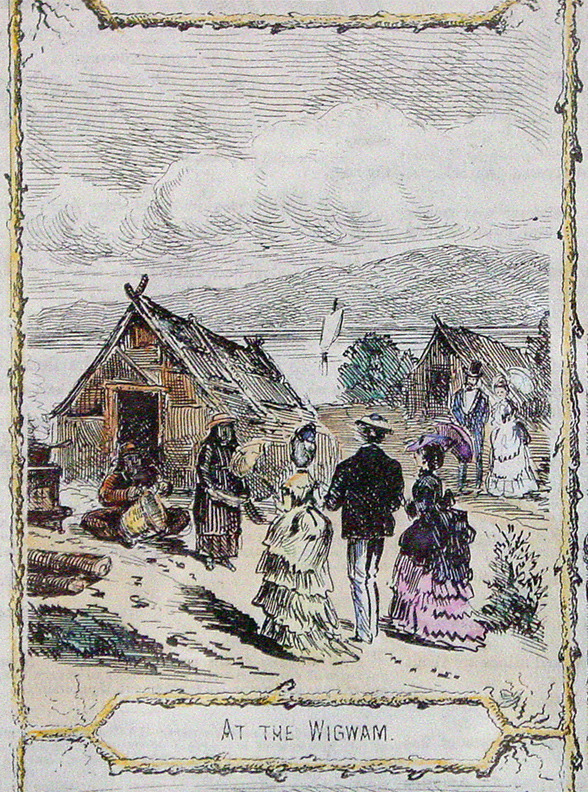 Temporary camp near the tip of Fontaine Claire where the Maliseet took advantage of the busy tourist season to sell their handicrafts.

Around 1860, established at that time on a reserve in the township of Viger, the Maliseet would move to the riverside in the summer and install a temporary camp near the tip of Fontaine Claire. They then took up the production of handicrafts, much to the pleasure of the tourists who, interested in their art, bartered with them and bought souvenirs to take home from their stay in Cacouna.

In front of their wigwams, the women wove baskets from ash splints that they entwined with sweetgrass picked from the riverbank, and made straw hats and beautiful feather fans, while the menfolk offered their services as guides for fishing or hunting excursions, making small canoes from bark between trips.

The production of handmade crafts was their main source of income and therefore essential for their livelihoods. The locals bought dogwood baskets from them, especially useful when picking fruit and vegetables. The baskets were also used by the laundresses of the rue du Port (Quai) and those working in the hotels to carry their washing in.

Inhabitants of the Reserve 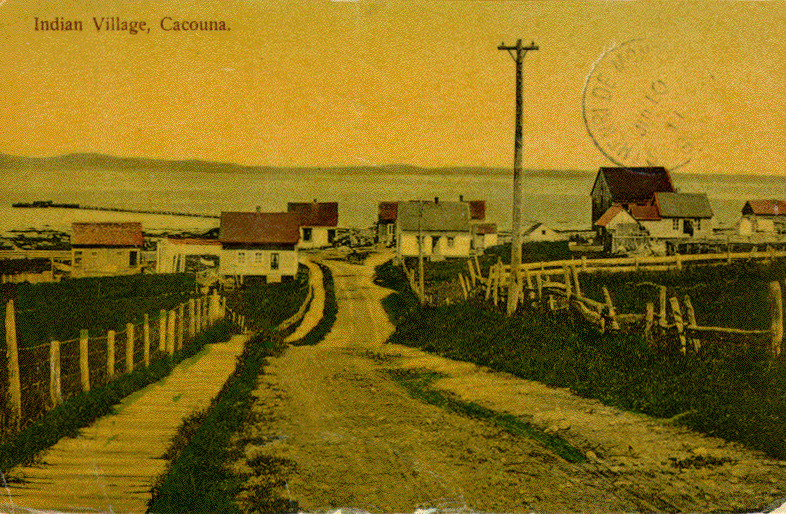 Indian village near the tip of Fontaine Claire, circa 1900.

Around 1880, four aboriginal families were living near the tip of Fontaine Claire year round. They resided in small huts built from materials recovered from the reserve at Saint-François (Viger). In total, seventeen people lived in two huts. The Chief Jean Athanase, Noël Aubin, James Gray, and the widow Marie Lagacé lived in Cacouna.

In the summer, they were joined by other Maliseet families, who erected up to fourteen temporary huts to live in near the river. In the small village of Fontaine Claire, the resident Maliseet population went up to twenty and this permanent occupation obliged the Department of Indian Affairs to buy a parcel of land, sixty feet wide, between the route de la Grève and the river, to become the reserve of Cacouna in 1891. The Denis, Brière and Launière families adopted this place. 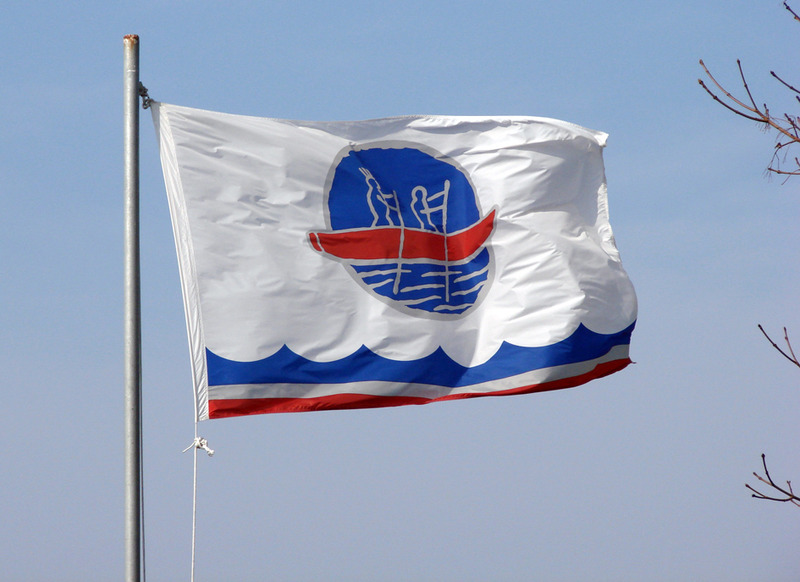 The MVFN flag flies in front of the Administrative Centre of the Nation in Cacouna.

Unlike the other aboriginal nations in the province of Quebec, the Maliseet have not been regrouped into a community. They are scattered throughout the province and are integrated with the non-aboriginal population.

In 1987, around one hundred and thirty Maliseet gathered together in Rivière-du-Loup to elect a Chief and Band Council. In 1989, the Quebec National Assembly officially recognized them as the eleventh Aboriginal Nation of Quebec. In 1998, the Maliseet had a building erected on their land in Cacouna to house the Band offices. The Nation’s territory is limited today to the reserves of Whitworth and Cacouna (the smallest reserve in Canada). The Maliseet of Viger refuse to be confined to their reserves, however, where one will find neither commerce nor permanent residence other than the maison Denis-Launière.

The Maison Denis-Launière and its Last Resident 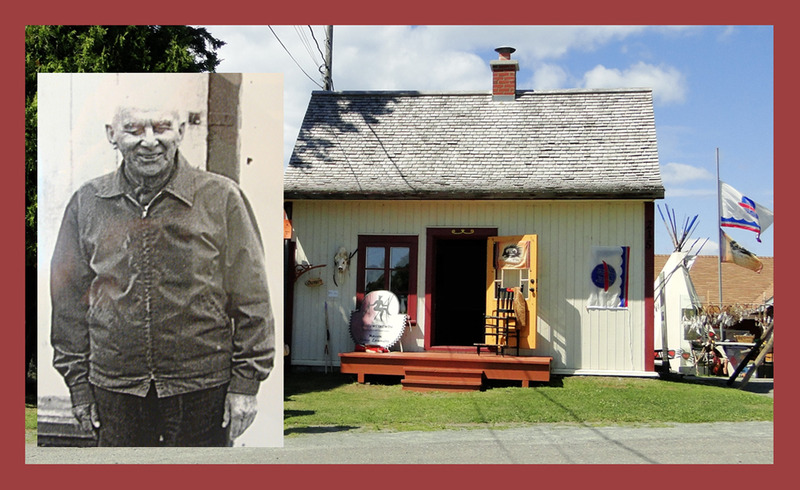 The small house that the last resident, Chief Joseph Launière, occupied until his death in 1972.
Between its planks is written the survival of our people ... the Maliseet of Viger First Nation.

A place for discussions and negotiations, the maison Denis-Launière gave shelter to the last resident Maliseet of the Cacouna reserve, the Chief Joseph Launière who, along with his wife Mina, raised 4 children there. He died on August 24, 1972. Today, one can discover this house and the life of its occupants through everyday objects of the end of the 19th century. The dwelling also houses an aboriginal art boutique, Matuweskewin, which showcases the work of the artists and artisans of the Maliseet of Viger First Nation.

Since October 2012, the Quebec Ministry of Culture and Communication has authorized Band Councils, as well as municipalities, to give legal status to a heritage property. The Maliseet of Viger First Nation is the first aboriginal community to exercise this right. The maison Denis-Launière is the last remnant of the historic presence of the Maliseet in the Bas-Saint-Laurent and symbolizes the survival of a people, a gathering place that fosters the promotion and dissemination of the history and culture of the Maliseet of Quebec. Identified as a heritage building by the Nation on July 25, 2013, the unveiling of the commemorative plaque took place on August 11, 2013 at 217, rue de la Grève, on the occasion of the 2013 edition of the annual event Deux Nations, Une Fête (Two Nations, One Celebration).